1969: A BAPTISM OF FIRE AGAINST LIVERPOOL

1969: A BAPTISM OF FIRE AGAINST LIVERPOOL

Last December’s UEFA Europa League MD6 clash with Arsenal was the eighth occasion that Dundalk met an English club in a European competition. We take a look back at the Lilywhites’ first-ever competitive game against an English side, when Liam Touhy’s men met Liverpool during the 1969/70 season. 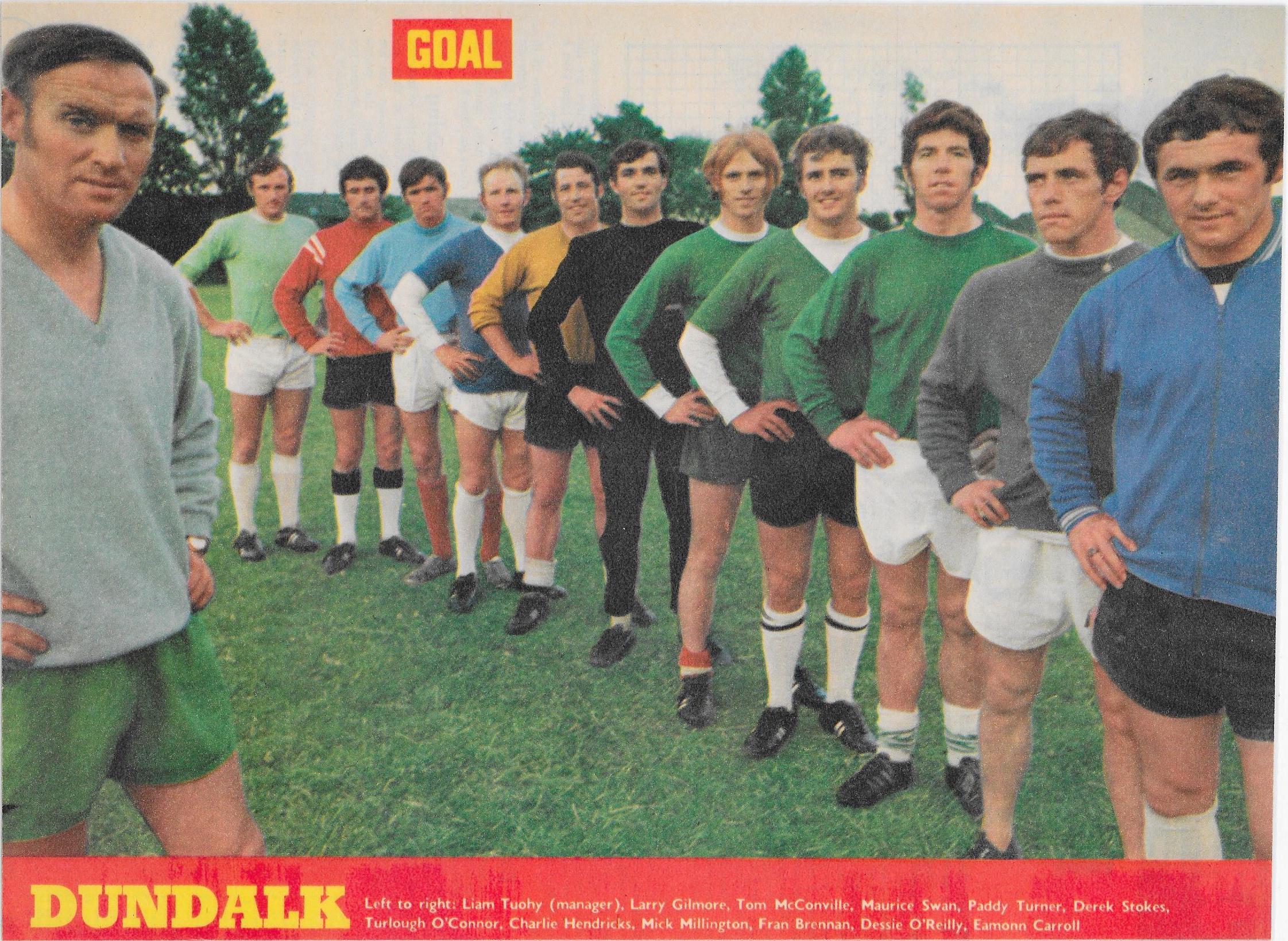 Liam Tuohy, pictured with his Dundalk team in 1969

After finishing second behind a Waterford side that won the league championship and Shield in 1968/69, Dundalk qualified for the old Inter-Cities Fairs Cup, a competition that was replaced and rebranded by the UEFA Cup in 1971.

Along with Shamrock Rovers and Drogheda United, Dundalk were one of three teams that finished the ’68/69 League of Ireland season on 16 points in the table, the Lilywhites pipping both to the runners-up spot on goal average.

Financially, the club wasn’t in a good position during the late sixties as the spending which resulted in an overhaul of Oriel Park – coupled with the money spent on assembling a league winning side in 1966/67 – began to take its toll!

As well as struggling to finance the costs of running the club on a day-to-day basis, Dundalk FC had also accumulated a large ‘capital debt’ which the club was unable to service. Everything came out in the wash in June 1969 when the board resigned and a new group took over the running of the club!

As a group manager with HB Ice Cream, Liam Touhy was based in the north-east region at the time. Struggling to combine his football and work commitments, Liam had to resign from his coaching position at Shamrock Rovers. That paved the way for a move to Dundalk and after accepting the club’s offer to become the team manager, he was also appointed to the board. 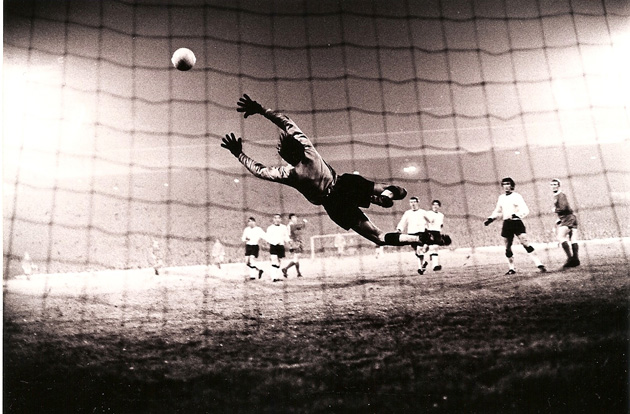 In his definitive book ‘The History of Dundalk FC’ the late Jim Murphy stated that: “The club that Liam Tuohy joined was not a happy one. Personality clashes, lack of stability and continuity at board level and unfulfilled promises given to players led to low morale. As well as that, events off the field had overshadowed the team’s performances in the previous couple of seasons.”

It was against this background that Dundalk were drawn against Bill Shankley’s Liverpool, in the first round of the 1969/70 Inter-Cities Fairs Cup. After refusing a request from Dundalk to switch the first leg to Oriel Park, Liverpool had home advantage for the first meeting on September 16th, 1969 with 32,000 people coming through the turnstiles at Anfield.

Dundalk, who went into the game on the back of some patchy domestic form in the President’s Cup and the Shield, managed to hold the Reds at bay for all of 59 seconds and Alun Evans gave Liverpool the lead when he met an Ian Callaghan corner to head home.

Things went from bad to worse after that and further goals from Chris Lawler, Tommy Smith, Bobby Graham and Evans gave Liverpool a 5-0 lead at the break. Shankley’s men didn’t let up in the second half and further goals by Alec Lindsay, Smith again, Peter Thompson, Ian Callaghan and Graham’s second rounded off an emphatic 10-0 win.

A weary Dundalk left their Southport hotel the following day to head for the sanctuary of home and lick their wounds after the drubbing. Speaking to the Liverpool Echo, manager Liam Tuohy was magnanimous in defeat. 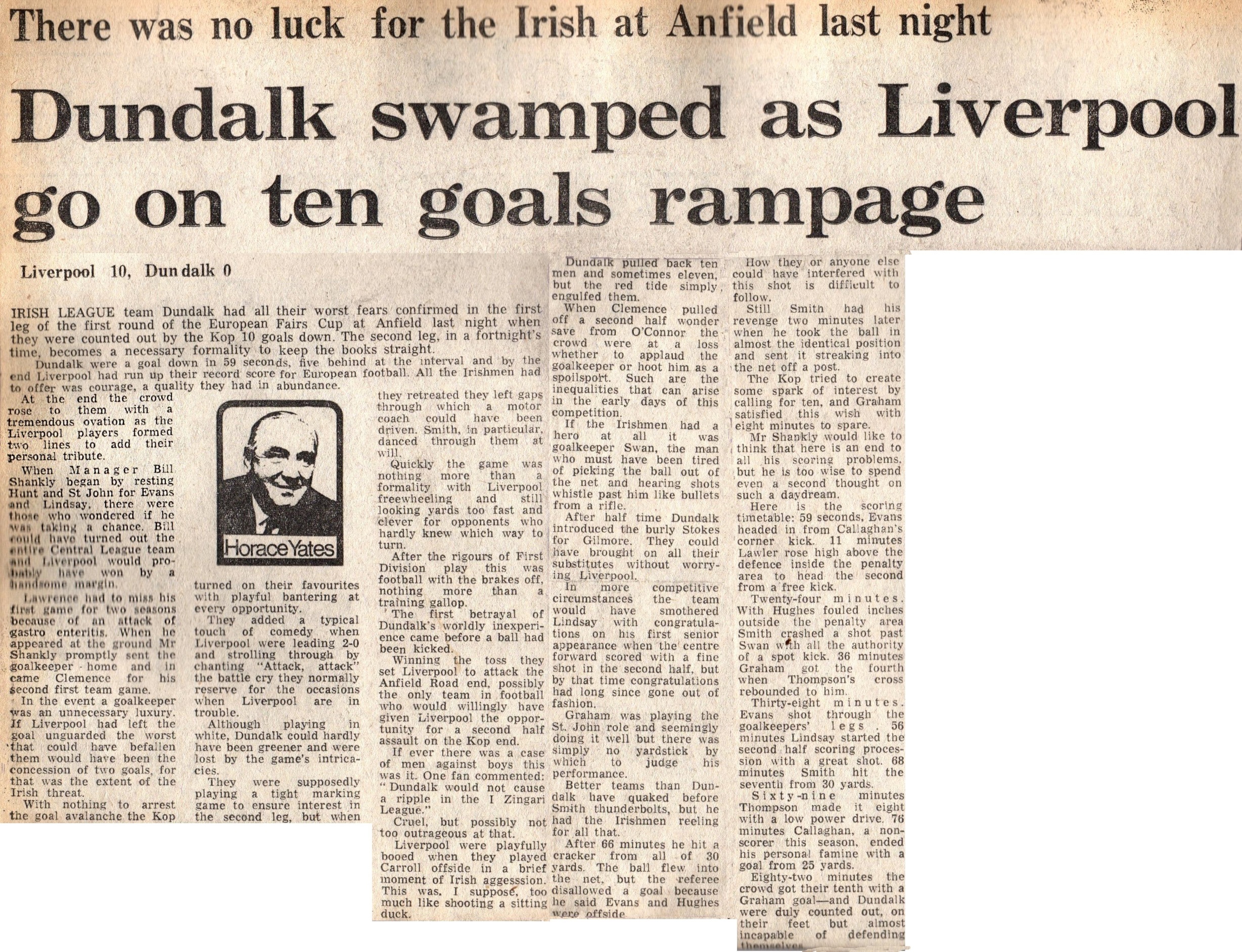 “I expected Liverpool to be a thoroughly professional side, and my fears were confirmed,” he said. “They are a fine all-round side. Many people will, no doubt, criticise them for the thrashing they handed us, but because they are professional this was the only thing they could do and the only thing I expected them to do.

“In fact, I would sooner they had scored 10 than toyed with us for the game. We are really looking forward to the return leg and I only hope that the fans will turn out in force and give them a great reception.”

It was a night to forget for Dundalk but the Anfield game had some novel subplots. In the crowd that night was a French school teacher on secondment in Liverpool by the name of Gerard Houllier who attended the game with a friend who was visiting from France. His fascination and admiration for Liverpool FC was born that night and, 29 years later in 1998, he went on to become their manager.

It is said that during the game Turlough O’Connor asked the Welsh referee, John Lewis, to have some sympathy and give the beleaguered Lilywhites a penalty. Lewis reportedly replied: “If you can get the ball in the penalty area, I’ll give you a penalty!” Whether we got the ball into the Liverpool penalty area after that or not I don’t know, but Dundalk certainly received no penalty! 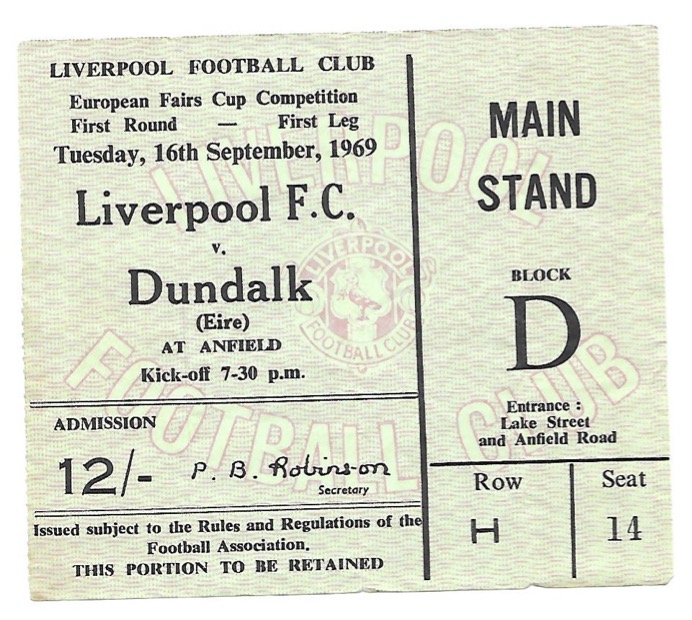 A ticket for the first-leg tie at Anfield

The board’s worst fears were realised in the return game at Oriel Park two weeks later. After missing out on hosting what would have been a lucrative first leg, a disappointing attendance of 5,000 – reflecting Liverpool’s status in Ireland at the time – turned up for the second leg at Oriel Park on September 30th, 1969.

For Dundalk, Mick Millington and Tommy Kinsella replaced Hendricks and Gilmore and the Lilywhites defence fared much better. Dundalk started well and put some pressure on the visitors but it took just 13 minutes for Liverpool to go ahead with a goal from Thompson that Swan should have saved. Thompson scored again on 32 minutes when his shot was deflected past Swan by Murray and Shanley’s side wrapped it up with goals from Graham and Callaghan.

A 14-0 aggregate defeat was an extremely sobering experience for Dundalk, but there was no shame in falling to such a loss against an exceptional team who went on to dominate in England and abroad in the seventies and eighties under a succession of homegrown managers.

Five years later, Liverpool recorded their biggest home victory in European competition, beating Stromsgodset of Norway 11-0 in a European Cup Winners Cup tie at Anfield to spare Dundalk the ignominy of holding that unwanted honour!  Thankfully, when we met Liverpool again in the 1982/83 European Cup we managed to keep the score to a relatively respectable 5-1 aggregate defeat!

It was a surprise when Liverpool made their exit from the Inter-Cities Fairs Cup competition in the next round, losing on the away goals rule to Vitoria de Setubal of Portugal. Ironically, it was our opponents tonight, Arsenal, who went on to win the competition by beating Anderlecht of Belgium 4-3 on aggregate over a two-legged final.