Thirty-five years ago this evening, the great Johan Cruyff – one of the most iconic footballers of all time – graced Oriel Park with his presence when Dundalk played host to the mighty Ajax Amsterdam in the second-leg of our European Cup Winners Cup first-round tie.

A three-time European Cup winner with Ajax as a player, Cruyff was in his second season as manager of the Dutch giants when they made the trip to Ireland.

After winning the UEFA Cup Winners Cup in 1987, Ajax qualified for the 1987-88 Cup Winners Cup and when the draw was made in July, Dundalk, who finished as runners-up to Shamrock Rovers in both the league and FAI Cup in 1986-87, prepared to welcome another European superpower to Oriel Park.

The first leg took place two weeks earlier at the De Meer Stadion in Amsterdam. The story of this match was how Turlough O’Connor’s side managed to contain an Ajax team, containing no less than 11 internationals, to just three shots at goal for 65 minutes until an incredibly unlucky deflection broke Dundalk’s spirit and gave Ajax the lead. This opened the floodgates and Ajax went on to win 4-0.

Alan O’Neill denied John van’t Schip and John Bosman hit the post early on but with Joey Malone, John Cleary and Harry McCue all working manfully to keep the Ajax attack at bay, Ajax were jeered off the pitch at half time.

Cruyff’s men were much improved after the break. This was due to two reasons: the introduction of Republic of Ireland international Frank Stapleton – pictured above – and Frank Rijkaard’s superb performance. Still, the Dundalk backline held out despite Stapleton shooting wide on two occasions.

Disaster arrived in the 65th minute when Rijkaard hit a powerful drive from 25 yards that took a wicked deflection off a Dundalk defender and dropped under the bar, giving O’Neill no chance.

To Dundalk’s credit, they didn’t fold and it took a tremendous 25-yard strike by Danny Blind to break them again. Substitute Aron Winter scored in the 81st minute to make it 3-0 before Rijkaard set up Stapleton for the fourth on 87 minutes. It proved to be his only goal in the red and white of Ajax!

Despite the lure of such a big name, a disappointing crowd of 4,500 turned up for the second leg at Oriel Park on Wednesday, September 30th, 1987. 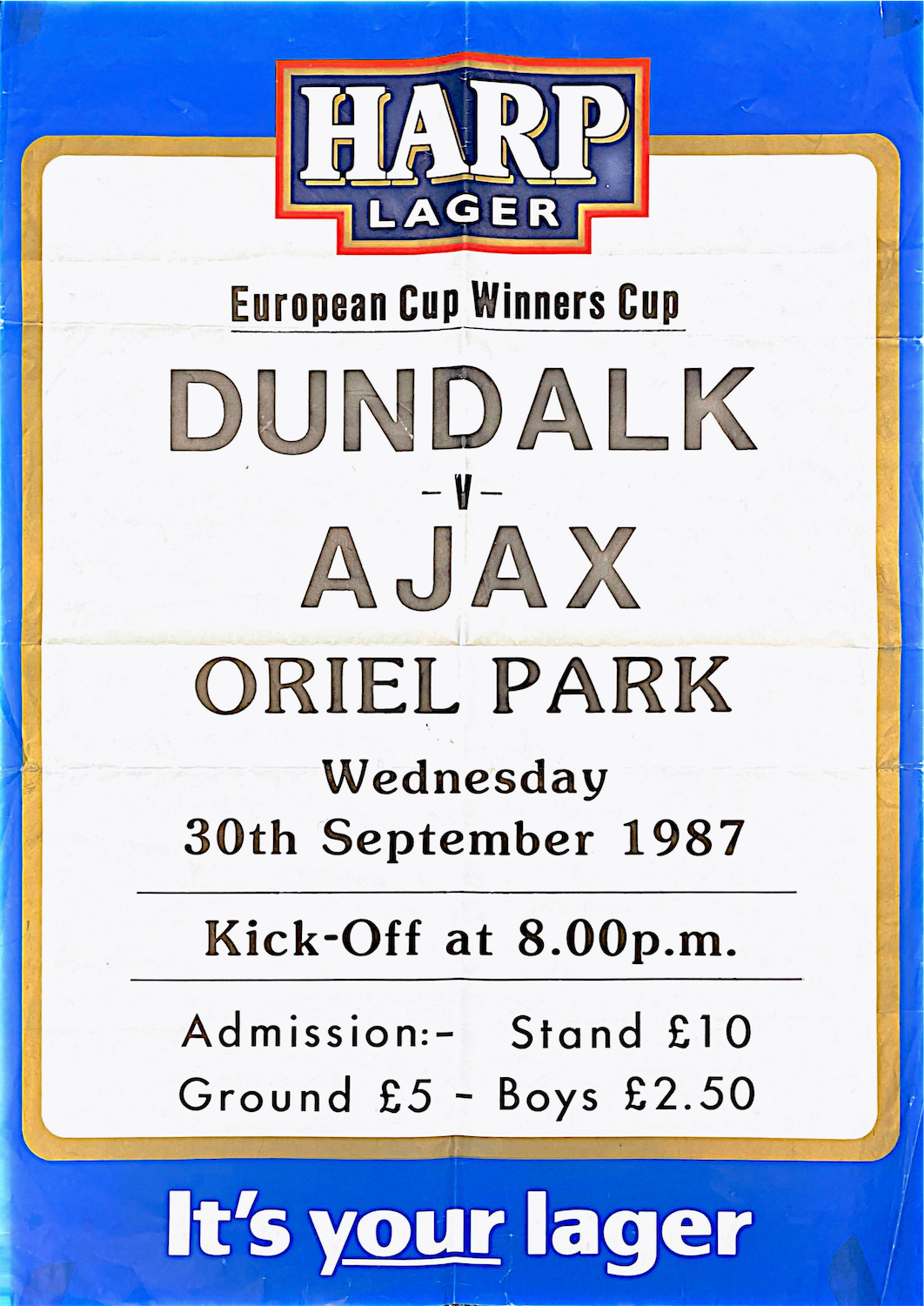 The highlight of the game was the performance of Dundalk goalkeeper Alan O’Neill who produced a string of fantastic saves, starting in the seventh minute when he saved a Ronald Spelbos penalty. His best save came when he brilliantly tipped a 20-yard shot from Bosman over the bar.

Larry Wyse had a rare Dundalk chance when he shot from distance but Stanley Menzo saved easily and Dundalk began to create more opportunities in the second half with Dessie Gorman shooting wide with just the goalkeeper to beat!

Dundalk looked well capable of holding out for a 0-0 draw until a terrible piece of misfortune in the 72nd minute. Paul Newe came back to help his defence but, under no pressure at all, his attempted back pass had too much height and pace and, despite a despairing dive from O’Neill, it ended up in the back of the net!

“It was terrible,” said Newe. “I had 20 family and friends watching from the stand. I remember that we had a corner but Ajax won possession and started a counter-attack. I had just got an earful for not tracking back so I ran the length of the pitch to help out. I thought I was great getting back to defend!

“I won possession and, of course, in those days you can pass the ball back, so I tried to chip the ball back to Alan but ended up chipping it into the top corner. However, despite that moment it was a magnificent experience to play against Ajax!”

Ajax added another with 87 minutes on the clock when O’Neill made a great save from Arnold Scholten only to see the rebound fall at the feet of substitute Hennie Meijer who tapped the ball into the empty net.

“Ajax were an incredible team,” said Larry Wyse. “In both games they were amazing. We could barely get a kick of the ball because they kept possession so well.

“I remember the former Man United player Arnold Muhren playing that night. He was wonderful and at the end of the game there wasn’t a bead of sweat on his forehead!

“Those games were a great experience,” he added. “We thought we were good players but it was a different level and we just chased shadows. It wasn’t nice to be beaten though!”

Dundalk recovered from the elimination to go on and win the league and FAI Cup double but despite also knocking Hamburg, Young Boys and Marseille out, Ajax were beaten by unfancied Belgian side Mechelen in the final. To make matters worse, they finished second in the Eredivisie, nine points behind champions PSV.

Rijkaard, Arnold Muhren, Aron Winter, Jan Wouters, John Bosman and John van’t Schip did have something to celebrate in the summer of 1988, however, as they were part of the Holland team that won the European Championships in Germany, beating Stapleton and the Republic of Ireland on their way to the final!