In a pre-internet, pre-Google summer of 1994, it’s safe to say that many Dundalk fans had never heard of Brian Byrne when Dermot Keely took him to Oriel Park.

‘A left-sided midfielder, acquired from Leinster Senior League outfit Glenmore Celtic’ was the Dundalk Democrat’s description of Keely’s unheralded arrival ahead of the League of Ireland campaign. Even then, people weren’t 100% sure. In the following week’s edition, he was named as ‘Niall Byrne’.

In comparison to fellow new boys Jody Byrne, Anto Whelan and John Coady, the gangly 22-year-old was a relative unknown with just five senior League of Ireland appearances to his name from a short-lived stint at Drogheda United during the 1992-93 season. 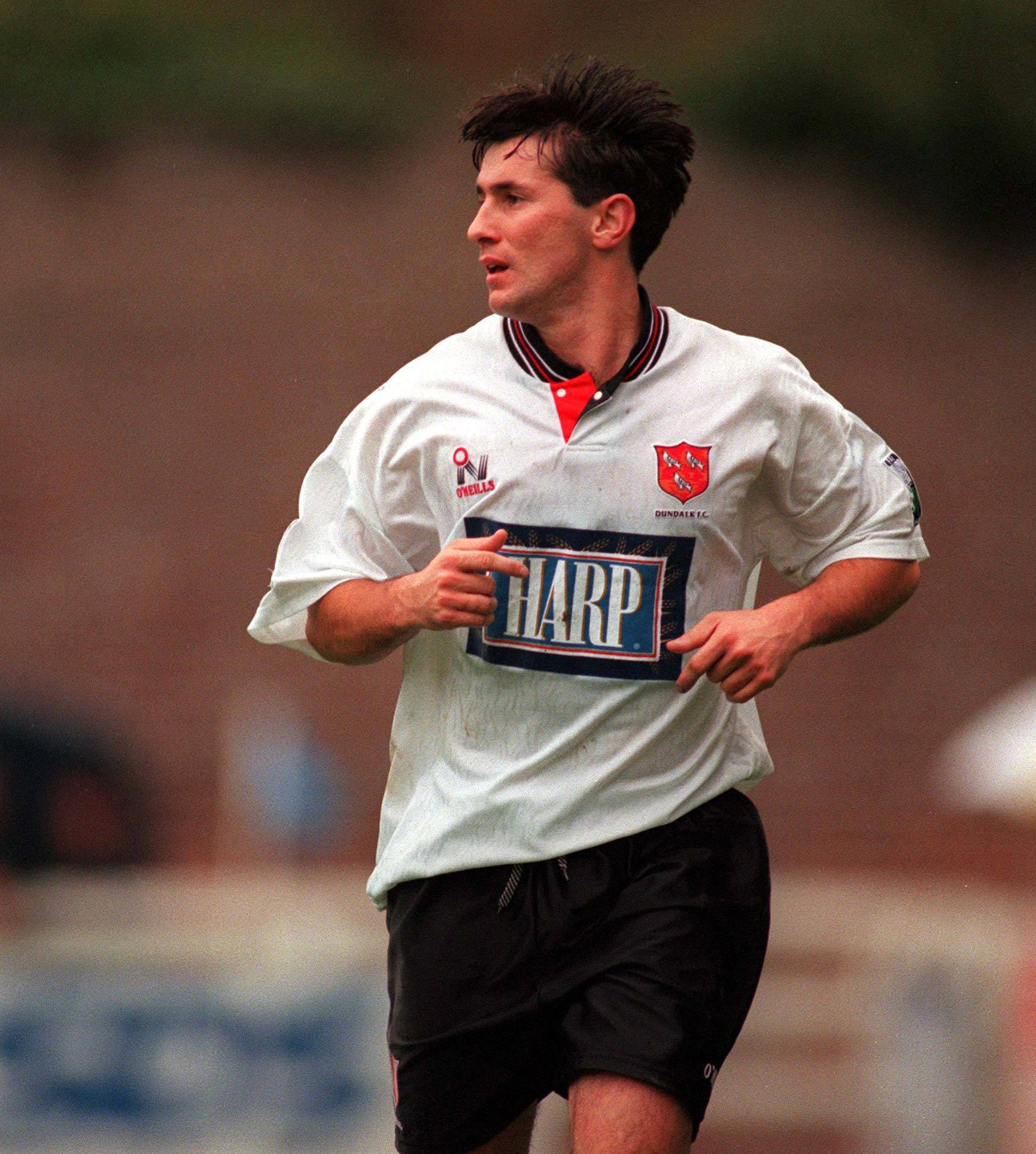 Like many footballers on this island, Byrne tasted life across the water, joining Huddersfield Town as a 16-year-old. He joined up with his namesake, Jason, a fellow product of Lourdes Celtic’s academy, and some other familiar faces at the McAlpine Stadium.

“I went to Huddersfield Town in 1988,” Brian told DundalkFC.com. “Myself and Jason were at Lourdes Celtic when we were kids and he went over a couple of months before me. Eoin Hand was the manager at Huddersfield at the time and there were a few other Irish players there as well.”

One of those was Mick Byrne, the well-travelled Dubliner who was a member of the Shamrock Rovers side that won three league titles on the spin between 1985 and 1987. After leaving Huddersfield, Byrne bounced from club to club in Ireland and rocked up at Oriel Park midway through the 94-95 season, scoring four goals in just eight appearances.

“I was an apprentice at Huddersfield when Mick was there and I used to clean his boots,” laughed Brian. “Little did I know at that time that I’d end up winning a league title with him almost 10 years later!”

Injuries hampered Brian’s progress and four years later he was back in Ireland. When a move to South Africa fell through, he slowly but surely started to drift away from football but a chance meeting with Pat Byrne left the door ajar.

“I was playing in a seven-a-side summer pre-season tournament with Glenmore Celtic out at the Golden Globe in Dublin,” recalled Brian. “I bumped into Pat, who was managing St Jame’s Gate at the time, and he asked me why I wasn’t playing League of Ireland.

“Nobody seems to be interested in me,” was my reply.
“That’s because people don’t seem to think you’re taking football seriously anymore!” said Pat.
“If you’re interested, I know Dermot Keely at Dundalk. I can give him a shout if you want?”

“I rang Dermot myself,” said Brian. “I knew he was a no-nonsense character but he told me to come along and do pre-season at Dundalk and see how it goes. The rest, is history, as they say!”

After running the hills of Ravensdale for a week, Byrne’s first appearance in a Dundalk shirt came in a low-key, pre-season friendly win over Rock Celtic at Sandy Lane on July 16th 1994.

According to the Democrat, Byrne ‘impressed with his darting runs along the left-wing that consistently resulted in good quality crosses being put into the penalty area, and though no goals directly resulted, Keely can take some heart from the service Byrne gave.’

A trip to Shamrock Park to face Portadown was next on the itinerary but the matches became a little more glamorous in the weeks that followed as Sheffield Wednesday, Manchester United and Liverpool all made their way to Oriel Park in pre-season. Byrne fired a ‘sweetly struck’ effort past David James to score Dundalk’s goal in their 2-1 defeat to the Merseysiders. 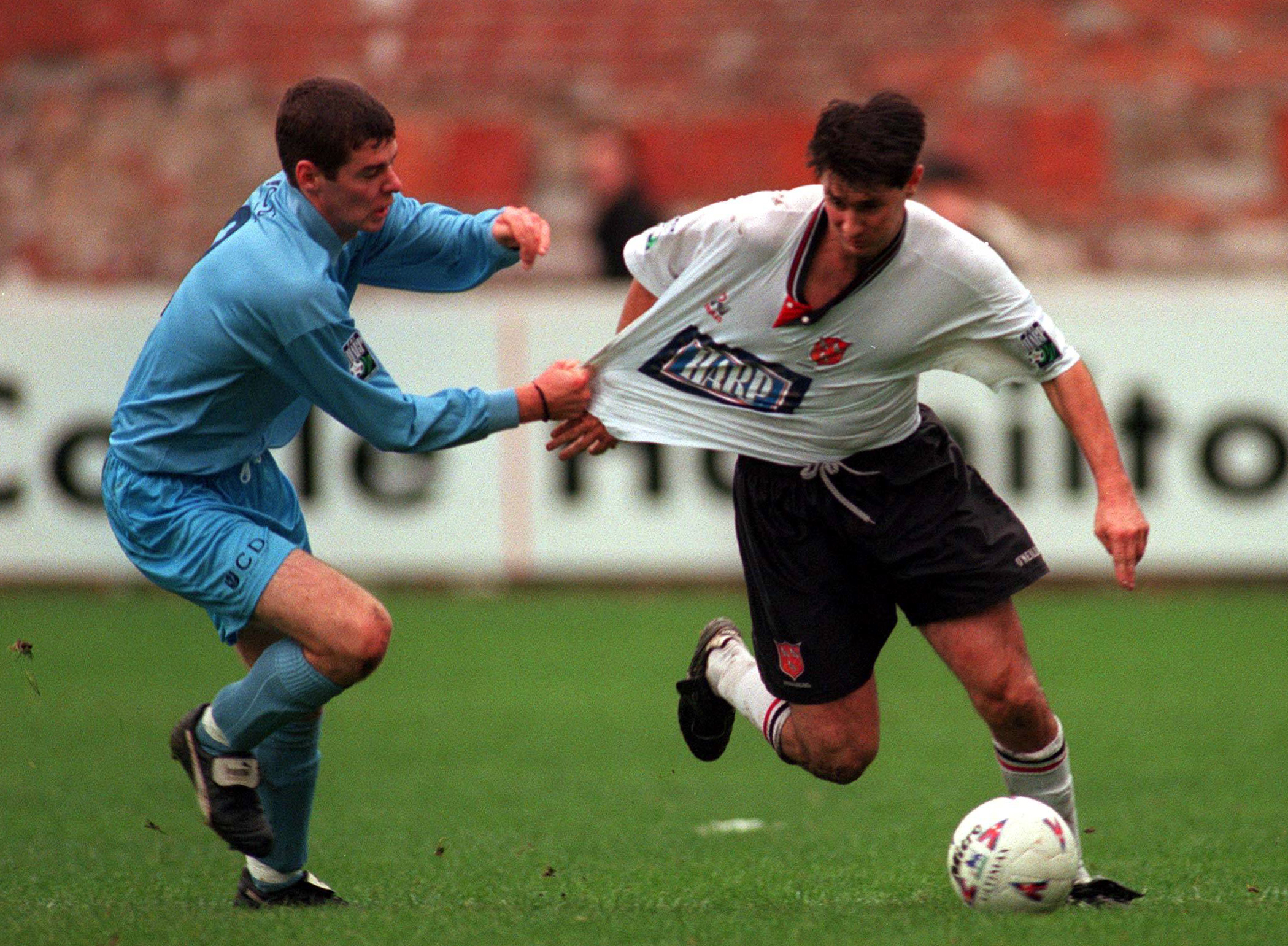 Brian Byrne in action against Eamonn McLoughlin of UCD  at Oriel Park in 1996. Photo by Brendan Moran/Sportsfile

“Unfortunately, with the way the season is played now, League of Ireland clubs miss those sort of games now. They were brilliant matches, played in front of massive crowds and it was something to really look forward to.”

Byrne started in Dundalk’s first competitive game of the season, a 5-0 demolition of Jim McLaughlin’s Drogheda United on Boyneside, but reality hit home in the opening fixture of the league campaign when the Lilywhites slipped to a 2-0 defeat against Bohemians at Dalymount Park.

After coming off the bench to replace the injured Greg O’Dowd with a quarter of an hour played, Byrne lasted just 59 minutes before being hooked for James Coll.

The Democrat put the substitution down to a ‘bad hand injury’ sustained on a ‘trampled surface which was still feeling the effects of hosting the Sunstroke 94 festival three days earlier’. Byrne, however, remembers it differently!

“What was I thinking after that game? I was thinking it’s time to go back and play Leinster Senior League football,” he laughed. “It was my first league game for the club and I was so nervous. My touch got worse and worse and I just couldn’t do anything right. I ended up getting substituted in the second half. I lost my way completely.”

He eventually got to grips with life at Oriel Park and after starting in the 1-0 win over Shelbourne at Oriel Park on October 4th 1994, Byrne made the number 11 shirt his own, playing in 26 of the subsequent 27 league games. His jinking runs made him a hero in the Shed and stand alike.

He scored three league goals, the second a deflected effort past Alan O’Neil in Dundalk’s crucial 2-1 win over Shamrock Rovers at Oriel Park on December 27th, 1994 and the third a side-footed effort against Cork City that snatched all three points at Turner’s Cross during the title run-in.

“I’ve seen those goals on YouTube,” he said. “The weather was awful that day against Rovers. It was lashing rain. The one against Cork was the most important I scored, though. That was in the fifth or sixth last game of the season and Cork were a tough side.”

It’s his first league goal for the Lilywhites, however, that lives in the memory of most supporters. It came against St Patrick’s Athletic on November 24th, 1994. You know the one. It even featured as a ‘What Happened Next?’ on BBC’s ‘A Question of Sport’ programme.

Writing in the Irish Independent on April 1st, journalist Daniel McDonnell described it brilliantly in his ‘My Favourite Game’ column.

‘He (Byrne) was stationed at the edge of the (Dundalk) box when Brian Kerr’s Saints, frustrated by a string of misses, pushed for an equaliser and sent their goalie Tony O’Dowd up for a corner. Giddiness ensued.

‘The delivery was poor and hooked to safety and all of a sudden Byrne was controlling the ball with his head, 70 yards from goal with one defender ahead of him and O’Dowd leading an undignified pursuit.

‘Byrne was skilful rather than speedy, and the muddy pitch added a layer of unpredictability to the dribble but he maintained balance, dropped the shoulder and skipped around the last man on the halfway line as the volume grew.

‘He shunned the temptation to take a pot-shot so he was now a flagging long-distance runner on the last lap, with O’Dowd gaining ground. Alas, the ‘keeper’s desperate attempt to launch his body at either man or ball at the edge of the box fell short.

‘Another Pat’s defender had caught up too but he only succeeded in knocking Byrne off balance and the local hero just about stayed upright to poke the ball into the net before the battery power emptied and he collapsed in celebration.’

“Unfortunately, I never actually saw it on a Question of Sport that time,” said Byrne. “I remember the goal well, though. I’m still trying to get my breath back from it!”

A 1-0 win over Sligo Rovers in the second last game of the season – – the side’s 10th one-goal victory of the campaign – left Dundalk firmly in the title mix on the final day. To pull it off, Keely’s side needed to beat Galway United at Oriel Park, hope that Derry City would drop points away to Athlone Town and St Pat’s could avoid defeat against Shelbourne. It was an unlikely scenario. 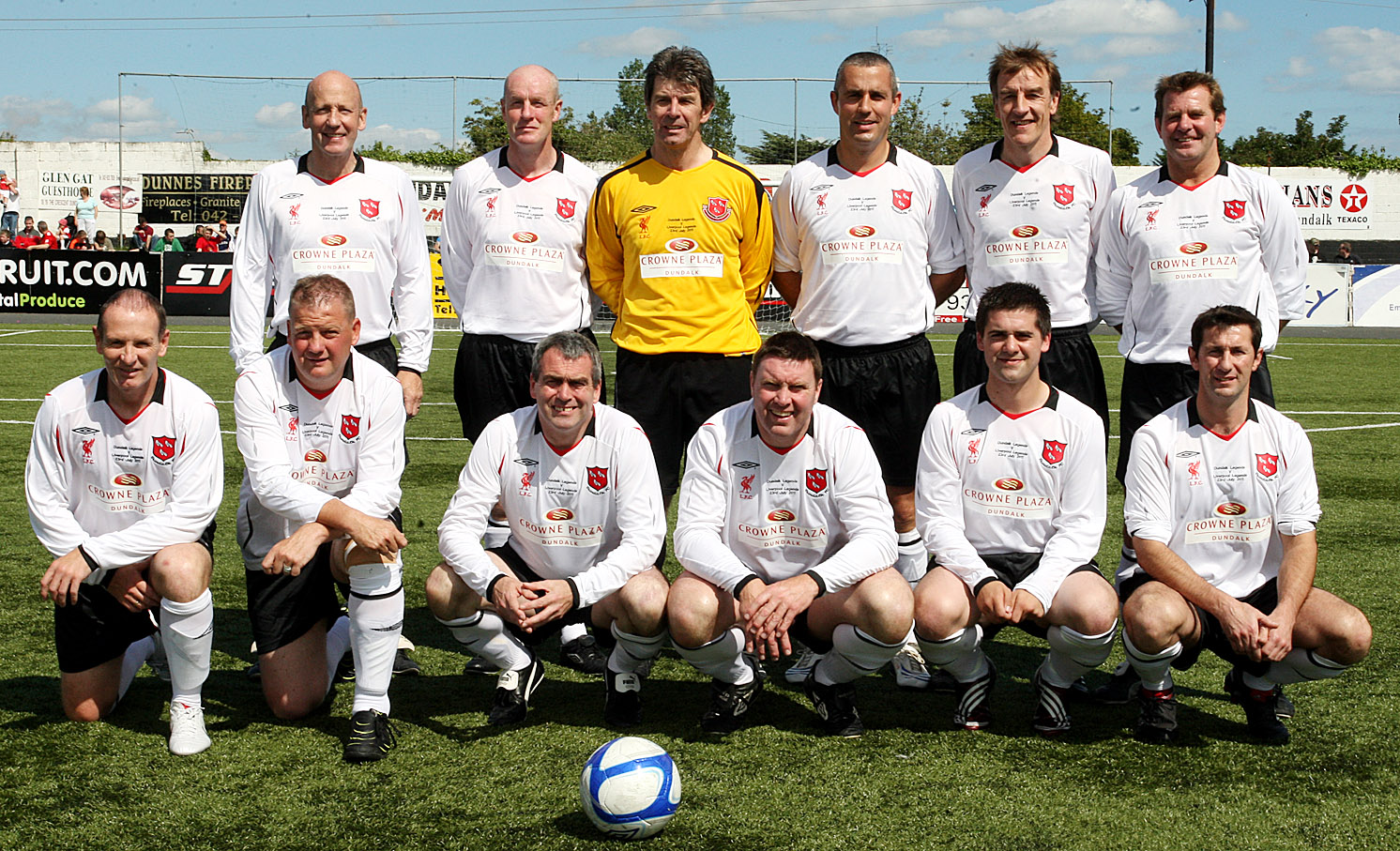 Brian Byrne, front row on the right, pictured with some of his old teammates before a game with Liverpool Legends at Oriel Park in 2011. Photo by Mick Slevin.

“I remember being a bit nervous going to Oriel Park because it wasn’t in our hands and we couldn’t control what Derry were doing. Most of us felt they were going to beat Athlone and nine times out of 10 they would have with the team that they had back then,” recalled Byrne.

“We went into our game thinking that we were going to beat Galway but our finishing wasn’t great on the day until Tom McNulty popped up and broke the deadlock.”

Mick Doohan’s second secured Keely’s side the three points they needed and with Shels losing to Jason Byrne’s goal at Tolka Park, attention turned to the midlands where Athlone were drawing 1-1 against Derry.

LMFM’s Gerry Malone hooked his radio up to the PA and the final, agonising, couple of minutes from St Mel’s Park were played out with Dundalk players – and supporters – kicking every ball.

“Those last few minutes felt like an eternity,” said Byrne. “I remember listening to some of the game on the loudspeaker with the supporters and then a few minutes of it in the dressing room but I don’t recall where I was when we found out the game was over and we had won the league. I just remember the place going crazy and people celebrating like mad.”

It was a title win against all the odds. Faced with debts of almost €200k, the club almost hit the wall the previous November but Keely and his players possessed a fighting spirit that took them all the way to glory, defying pundits and the media alike.

“Nobody really gave us a chance,” said Byrne. “When you look back, none of our players got into the Team of the Year that season. I don’t think that’s ever happened before but I remember on the last day there were only about 1,200 people in the ground and I think that showed that even the people in Dundalk didn’t even believe we were going to win the league.”

Twenty-five years on, many are starting to re-evaluate the vintage of 1995 and Byrne was quick to jump to the defence of many of his teammates.

“We had some excellent players, and everybody really did play a part in us winning the league,” he said. “Stephen Kelly scored a load of important goals from midfield, James Coll was a no-nonsense defender, Joe Hanrahan was a fine player, Richie Purdy was a terrific full-back, and Anto Whelan was very organised and solid. John Coady played left-back – but I did more defending that he did,” he laughed.

“You think of Mick Doohan, who popped up with a lot of important goals, and Peter Withnell who came in and scored a few towards the end of the season. Tom McNulty was always there wrapping his foot around people’s legs and then, of course, we had the infamous Boxer in goals! It wasn’t a bad side at all.” 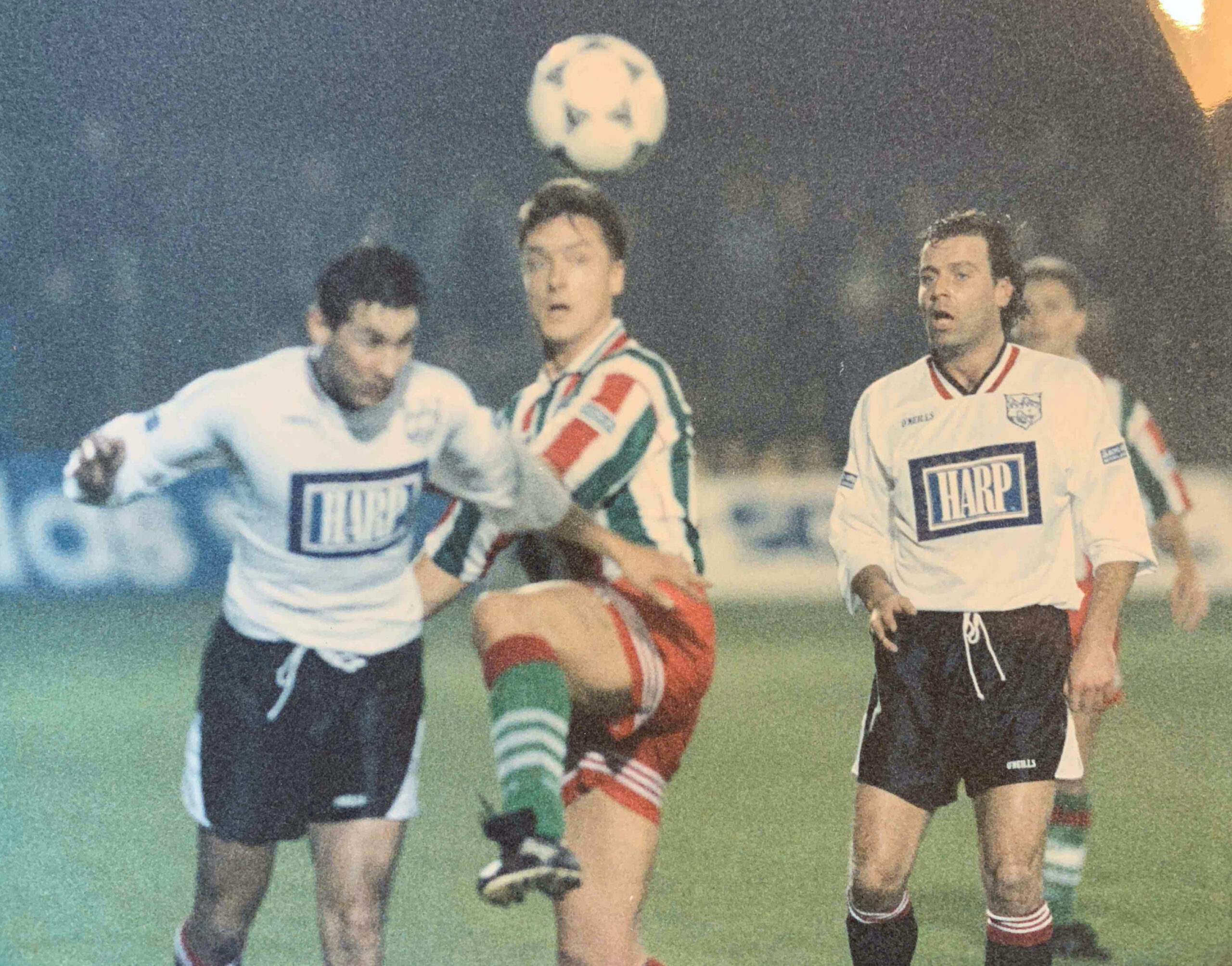 After a patchy opening to the defence of their title, Keely departed in early 1996 but Byrne was a constant for the following two seasons, finishing the 1997-98 campaign as top scorer with 16 goals. When he called time on his Oriel career in 1999, with 169 appearances and 39 goals to his name, everyone knew exactly who Brian Byrne was!

“My biggest regret is that we only won one trophy in my time at Dundalk,” he said. “As well as winning the league in 1995, we got to the final of the Leinster Senior Cup and the League Cup but we just couldn’t follow it up and find that level of consistency again in the seasons that followed.

“That’s disappointing but, without doubt, that title win 25 years ago is the biggest achievement I’ve ever had in football and I’ll never forget it.”