Vinny Perth’s return to the Oriel Park dugout turned out to be a frustrating one as Longford Town held Dundalk to a 1-1 draw in Friday night’s SSE Airtricity League Premier Division fixture.

Aaron McNally gave Longford an early lead but Chris Shields’ powerful header pulled Dundalk level before the interval and both sides had chances to win it in the second half with Patrick Hoban seeing a penalty saved by Lee Steacy while Sam Stanton and Alessio Abibi both made miraculous interventions to deny the Midlanders a first-ever Premier Division win over the Lilywhites.

The result did little for both teams. Dundalk are mired in eighth position, 13 points off the European places, while Longford Town are still rooted to the bottom of the table, 10 points adrift of safety. 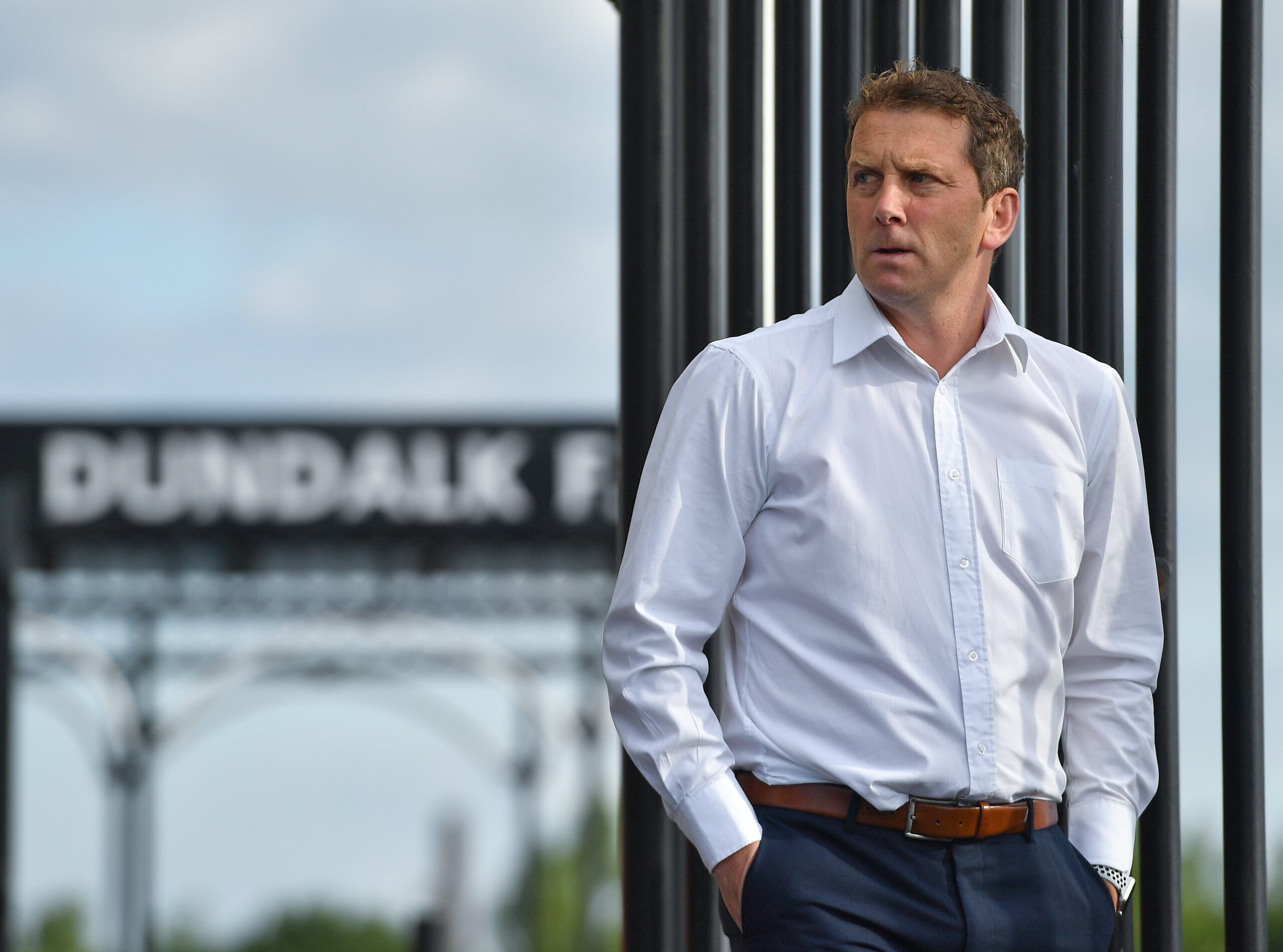 Dundalk started brightly and were unlucky not to take the lead when Daniel Kelly met Michael Duffy’s low cross but his effort was expertly saved by Steacy in the Longford goal.

Aaron McNally made the Lilywhites pay for that miss when he found space on the right-hand side of the Dundalk penalty area to lift the ball across Alessio Abibi and give the visitors the lead after 14 minutes.

The hosts were almost left with a mounting to climb when Dean Byrne tried his luck from 20 yards shortly after but his curling effort came crashing off the crossbar with Abibi beaten.

With questions being asked, Dundalk responded well and they drew level on the half-hour when captain Shields rose to meet Duffy’s corner and his thundering header left Steacy with no chance and the sides went in all square at the break. 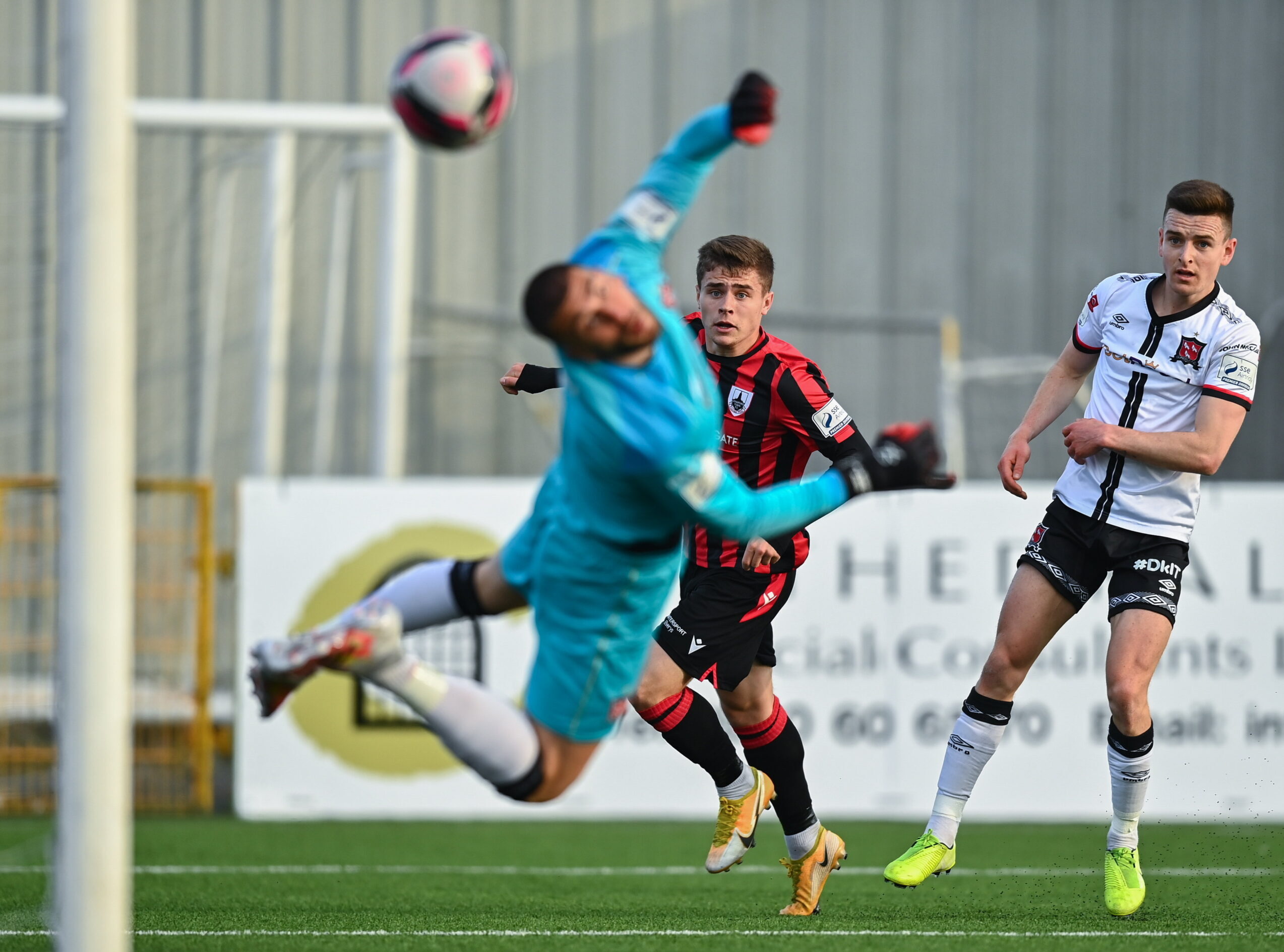 Aaron McNally of Longford Town puts his side ahead in the SSE Airtricity League Premier Division match with Dundalk at Oriel Park. Louth. Photo by Eóin Noonan/Sportsfile

Both sides struggled to keep a hold of possession in the early stages of the second half but chances started to appear and Dylan Grimes looked odds on to make it 2-1 to the visitors when he latched on to a poor pass by Sam Stanton, broke through the heart of the Lilywhites defence and skipped around Abibi but the Scottish midfielder recovered to make a last-ditch, magnificent clearance on the line.

Dundalk raised the intensity after that and Kelly dragged a shot just inches wide from an acute angle before they were handed a golden opportunity to go in front when referee Rob Hennessy pointed to the spot after a handball in the area with 73 minutes on the clock.

Patrick Hoban stepped up but his effort was saved by Steacy with the number nine’s follow up also safely gathered by the Longford ‘keeper. 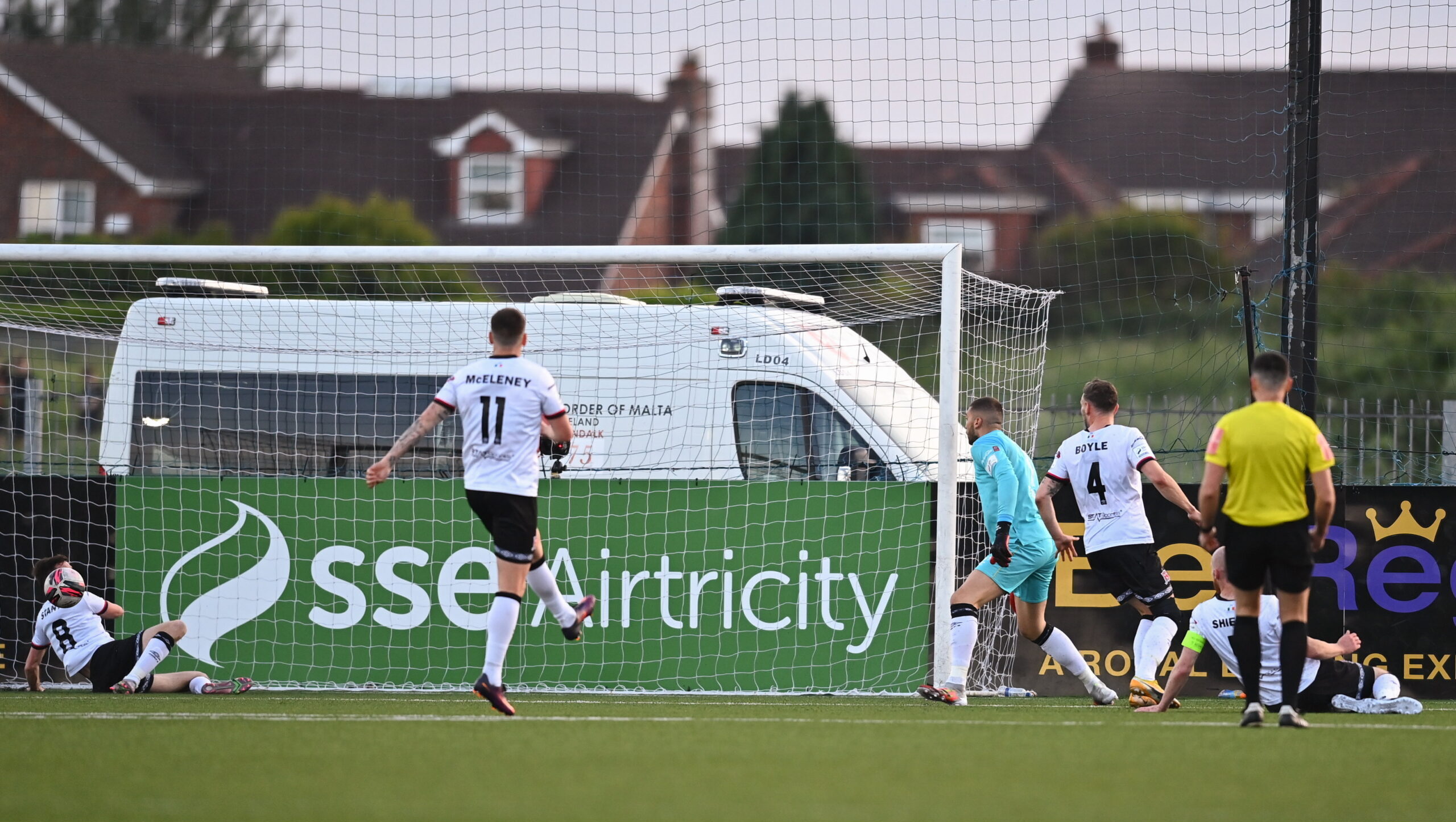 Dundalk continued to push hard for a winner but they left gaps at the back and Abibi had to make a stunning point-blank save from Aaron Dobbs to keep his side on equal terms.

Willed on by the 100 home supporters in attendance, Dundalk kept going to the death and substitute Greg Sloggett forced another outstanding save from Steacy and it looked like they had done enough to take all three points when substitute Raivis Jurkovskis’ cross found Michael Duffy in stoppage time but his effort veered inches wide of the post.