Four of the Dundalk FC Academy teams were in EA Sports National Underage League action at the weekend, with all four sides producing positive results.

In the only game at Oriel Park this weekend, Dundalk U17s hosted Cavan-Monaghan on Saturday morning looking to continue their good start to the season.

As has been the case in all of their games this season, Dundalk pressed high from kick-off and pressured Cavan-Monaghan into mistakes in the early minutes, with Jake Hough in particular causing problems from his role as right wing-back.

The visitors did eventually manage to settle into the game, as the Lilywhites struggled at times against the physical nature of their opponents.

Dundalk continued to pressure Cavan-Monaghan though, and they managed to break the deadly not long after the half hour mark, after a slick attacking move down the right wing between Jake Hough, Hugh Smith and Sam Case lead to a drilled ball across goal, which was finished off by Eoin Kenny to make it 1-0 to the Lilywhites. 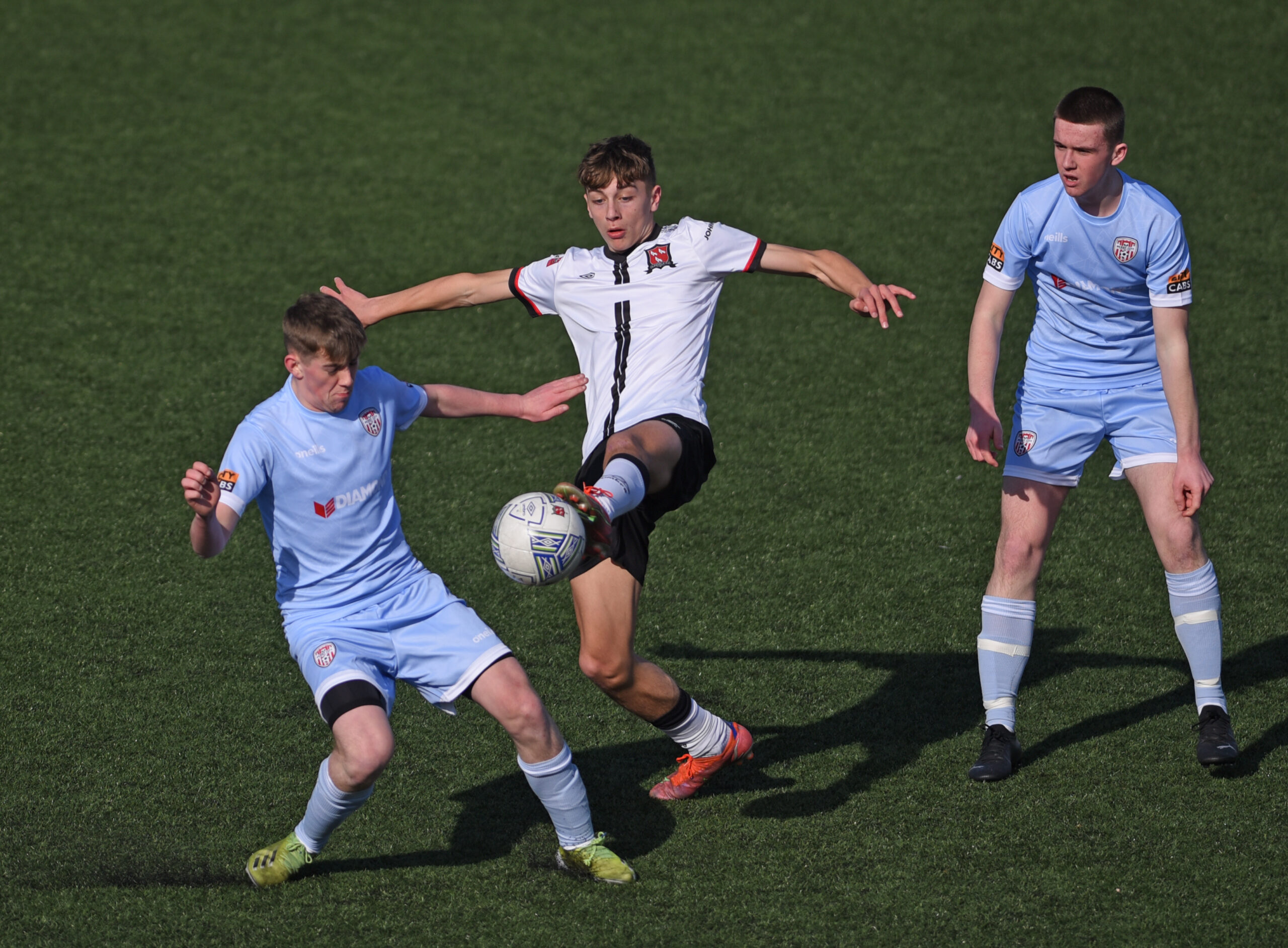 Hugh Smith was heavily involved for the U17s once again

The hosts looked to be well in control at the half came to a close, but disaster struck on the stroke of half time as Cavan Monaghan were awarded a penalty. Full back Ethan Balantine went on a marauding run through the centre of the pitch, but as he entered the box he collided with Luke Mulligan, leaving the referee no choice but to point to the spot. Ballantine stepped up to take the penalty and buried it in the corner to draw his side level heading into the break.

The second half was almost all Dundalk, as they pinned Cavan Monaghan in their own half for large periods and created some excellent chances, with Jake Hough and Rhys Kelly being denied from two good strikes in quick succession.

The game looked to be heading for a draw, but with two minutes to go Dundalk finally found the goal they’d been searching for. Markuss Strodds went on a brilliant run down the left flank before crossing into the box for Hugh Smith, whose effort deflected past the goalkeeper and into the net.

It was a late show for the Lilywhites but a well earned three points after another quality performance.

Also on Saturday afternoon, Roberto Bonello’s women’s U17 side travelled to Dublin to take on top of the group Shelbourne in what was a big test for the Lilywhites.

In an impressive display, the visitors held Shelbourne to a 0-0 draw, Dundalk’s second of the season and a good way to bounce back after last week’s defeat as they aim to build some momentum in the coming weeks.

On Sunday afternoon, Dundalk U19s travelled west as they took on Sligo Rovers at the Showgrounds.

In a tightly contested affair, Sligo ran out 3-2 winners through goals from Patrick Montgomery, Cillian Heaney and Peter Maguire. The Lilywhites pushed Sligo all the way, with Oisin Coleman and Emmanuel Adeboyega getting on the scoresheet for the away side, but they couldn’t find an equaliser as the hosts took all three points and dealt Dundalk just their second defeat of the season.

In the final action of the weekend, Dundalk had a short away trip as they took on Klub Kildare at Tougher Park.

In another tightly contested fixture, the Lilywhites picked up their first point of the group, as Runako Sweetman cancelled out Luke Mahon’s goal to secure a draw for the away side, who will aim to build some momentum in the coming weeks, starting with a home meeting with Bohemians next weekend.