All four academy sides were in action in the searing heat over the weekend in the EA SPORTS National Underage Leagues.

Darren McGarry’s U17 side played host to Athlone Town at Oriel Park on Friday evening while the U14s were at home to St Patrick’s Athletic on Saturday. Finally, there were two sides in action on Sunday, as the U19s hosted Derry City and the U15s were on their travels for the second week running as they took on St Patrick’s Athletic. 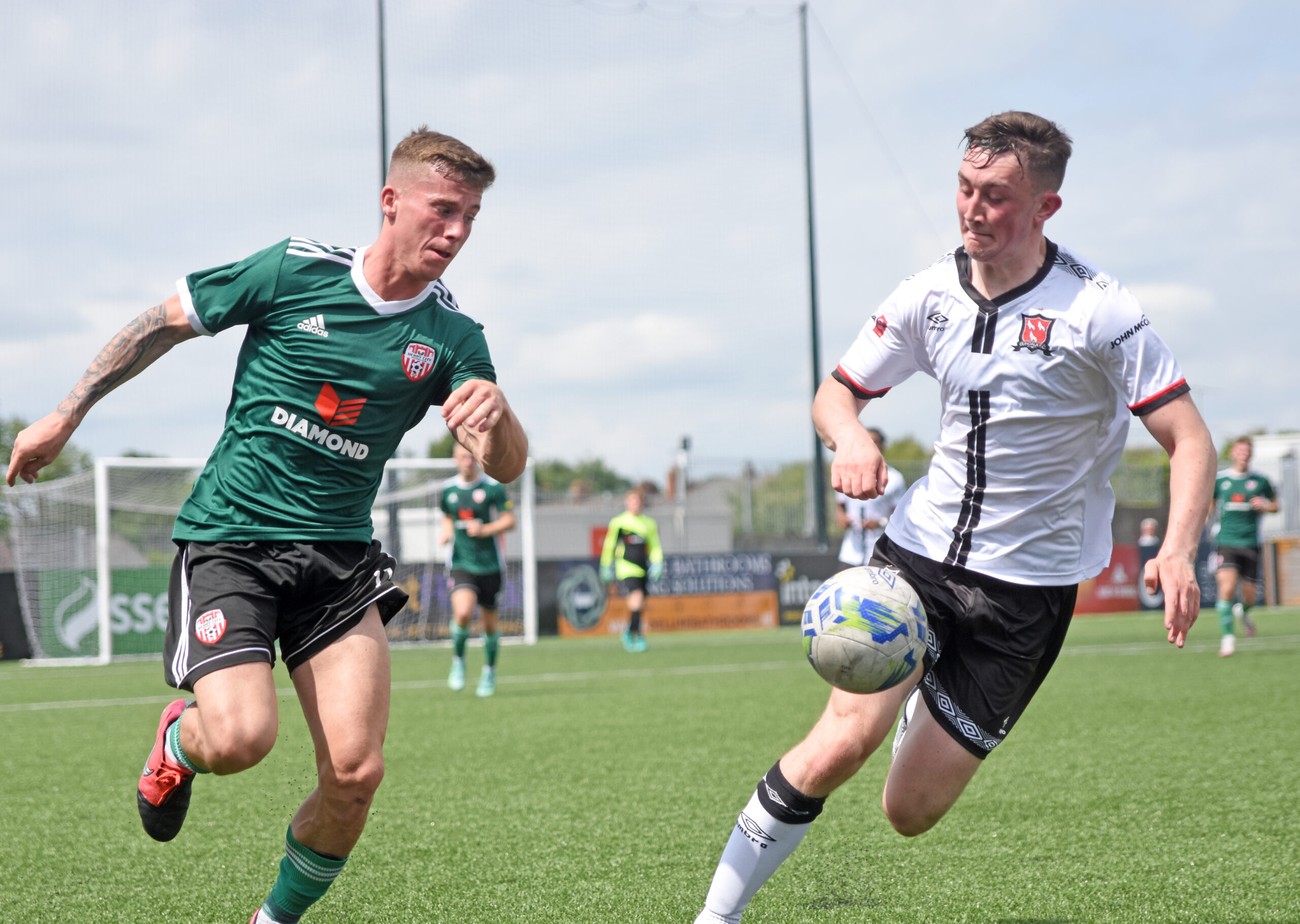 Jack Kavanagh in action against Derry City in the U19 game at Oriel Park on Sunday. Photo by Ciaran Culligan

The U17s continued their unbeaten start to the season with a 1-0 win over Athlone Town.

The young Lilywhites faced a different challenge from anything they’ve had so far this season as Athlone defended deep and forced Dundalk to break them down.

Darren McGarry’s side remained patient on the ball throughout and their dominance of the game was evident with a shot count of 22 with the Athlone goalkeeper producing some excellent saves to keep his side level.

It was beginning to look like the game might end all square when the Lilywhites finally found the breakthrough late on. Two substitutes combined, as Cathal O’Reilly crossed to the back post to find Callum Bonner, who headed home brilliantly to give Dundalk the lead.

McGarry’s side saw out the remainder of the game to pick up all three points and extend their unbeaten start to four games. 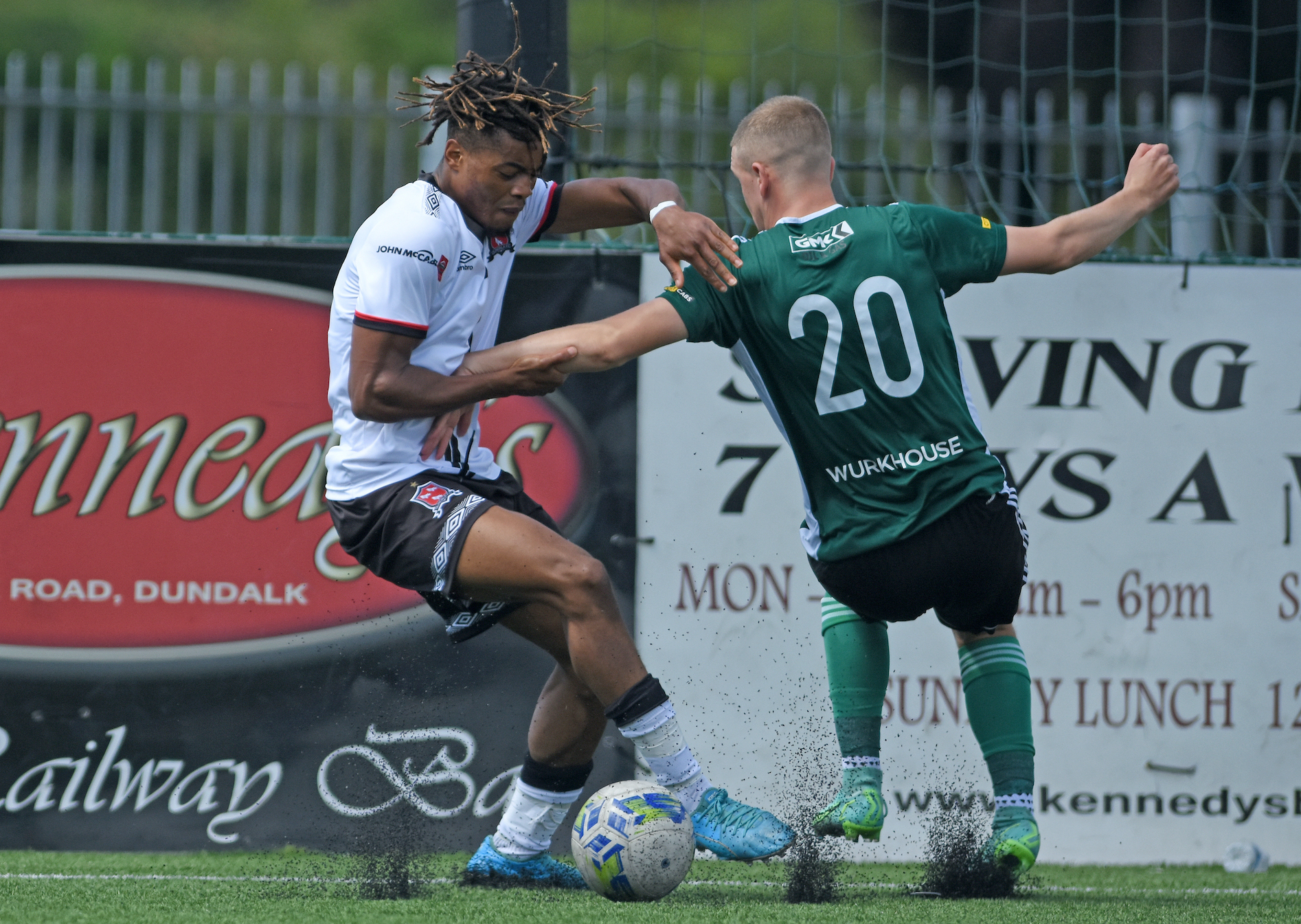 David Doyle in action for the U19 team against Derry City. Photo by Ciaran Culligan

The U14s had a tough game on their hands on Saturday afternoon, as they hosted St Patrick’s Athletic in the blistering summer heat.

It was a very tight first half but Simon Kelly’s side took the lead on the 20 minute mark when Luke Mulligan finished from a corner.

Dundalk thought they had a second when Niall O’Connor converted in the 35th minute but it was ruled out for a foul in the build-up; an unpopular decision amongst those at the game.

St Pat’s upped their game after the half-time break and they were gifted an equaliser when a mix-up at the back resulted in an own goal. The Saints grew in confidence after the equaliser and they went on to take the lead 10 minutes later from a superb long range effort.

They quickly added a third with another superb effort from range and despite Dundalk’s best efforts they couldn’t find that finishing touch against a very good side. It was a disappointing result for the U14s but they put in a high quality performance that they can build on over the coming weeks. 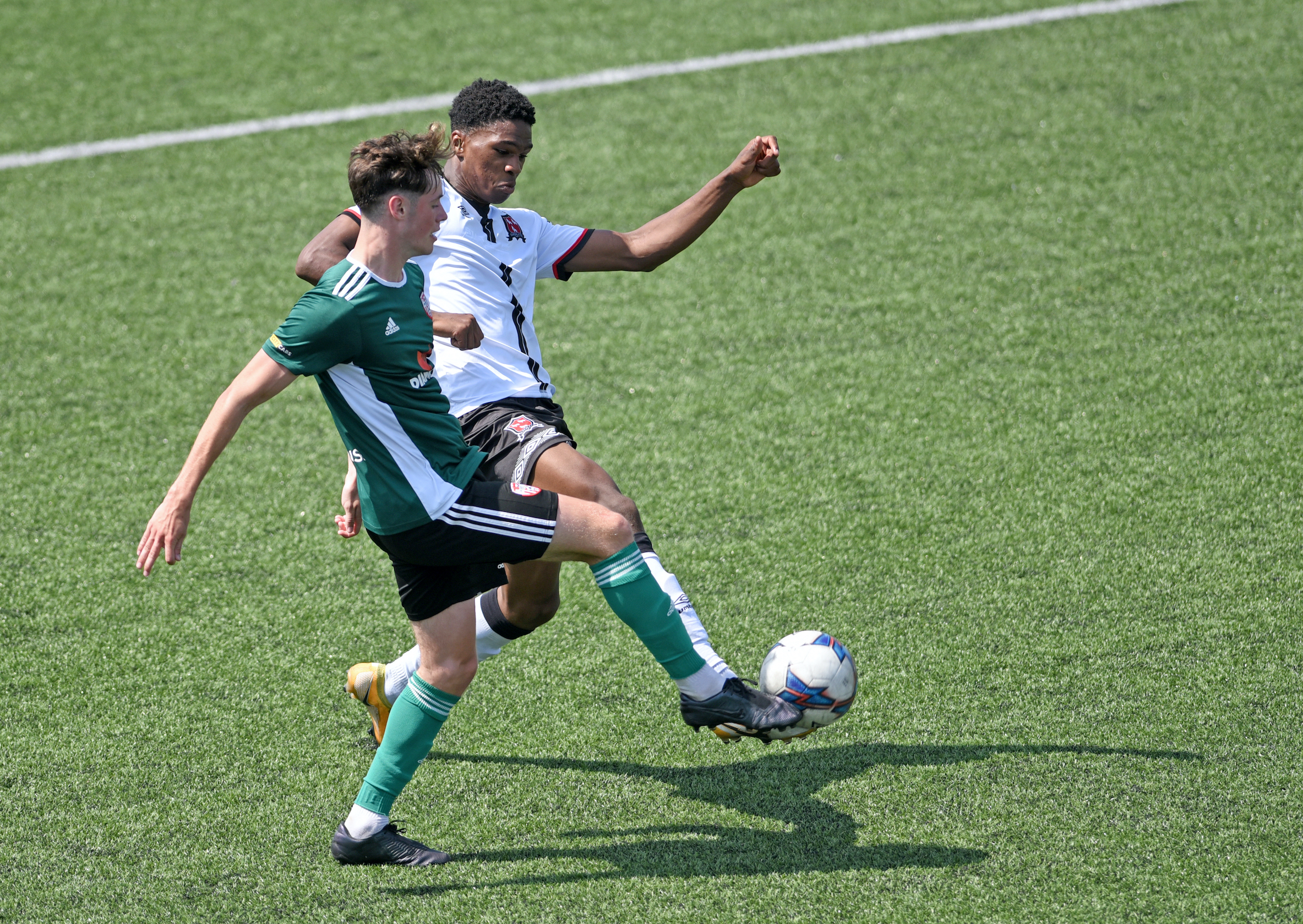 David Doyle in action for the U19 team against Derry City. Photo by Ciaran Culligan

The U15 side were on their travels again this weekend as they took on St Patrick’s Athletic on Sunday afternoon.

The game took place in difficult conditions, with the extreme heat playing its part as the game wore on. Despite the conditions, Dundalk put on an impressive defensive display for large parts of the game and showed resilience throughout. The Lilywhites best chances in the first half came from some brilliantly worked set-pieces, which have been a real thorn in the side of their opponents this season.

Dundalk’s best opportunity of the first half came in the 36th minute as Jack O’Flaherty struck narrowly wide following a well worked free-kick.

Despite their danger from set-pieces, Dundalk failed to take advantage and it was St Pat’s who took the lead just before the break to put the Lilywhites on the back foot.

After some encouraging words from head coach Conor Woods at the break, Dundalk came back out and continued to work hard, but the weather conditions weren’t helping the U15s in their efforts to find an equaliser.

Just after the hour mark, the Saints bagged a second goal of the afternoon and saw it out to take all three points.

Speaking after the game, head coach Conor Woods was full of praise for the commitment shown by his side throughout the game.

“Today we faced the best U15 side in the country,” he said. “I couldn’t ask for anymore from my side. To work as hard as they did in such difficult conditions, putting it up to the best team in the country, I can’t fault their effort at all.

“There are plenty of positives to take from it heading into our game on Thursday when we welcome Galway United to Oriel Park.” 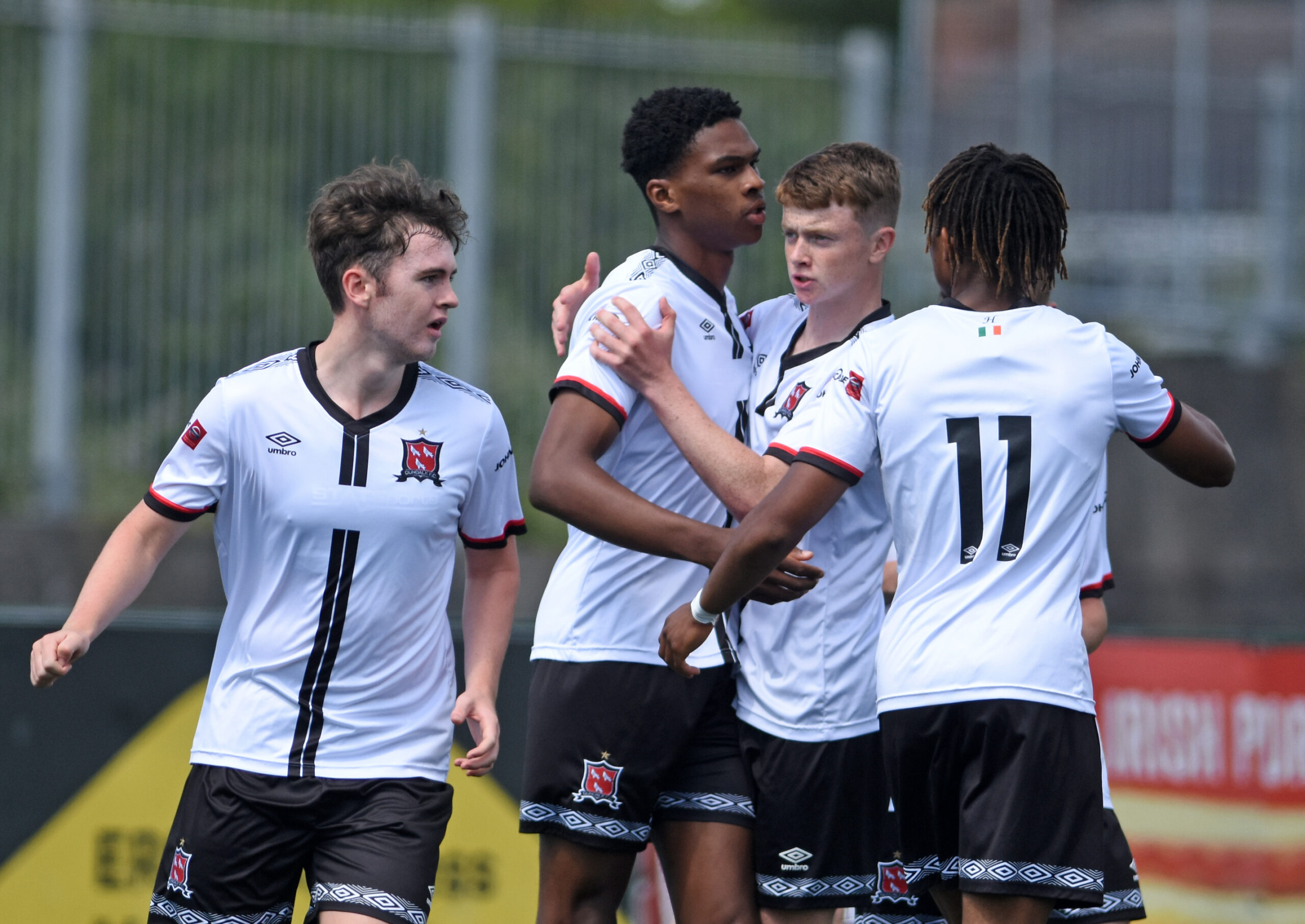 Mayowa Animasahun celebrates his goal against Derry City in the U19 game at Oriel Park. Photo by Ciaran Culligan

In the final game of the weekend, the U19s hosted Derry City at Oriel Park on Sunday morning.

Head coach Stephen McDonnell drafted in a number of the U17 squad for the match, as he was missing four of his team due to involvement with the first-team squad on Saturday, as well as two other injuries to the team. Kayle Wajsczuk, Nico Aleksandrovic, Josh Hand, Craig Moore and Oisin Coleman all came in from Darren McGarry’s U17 team.

Dundalk started the better of the two sides, and were rewarded for their good start on the 25-minute mark, as Mayowa Animasahun finished off a good set-piece.

The Lilywhites were consistently dangerous on the counter-attack throughout the first half, but as the second period wore on the heat began to play a part, as it did in the other matches over the weekend.

After making a couple of changes, Dundalk seemed to lose their rhythm and Derry City capitalised, equalising on the hour mark.

The Candystripes grew in confidence after the equaliser and it was one-way traffic for large parts of the second half. Derry once again took advantage of their period on top, as they took the lead with ten minutes to go through a top quality free-kick into the top corner.

Despite the disappointing result, the U19s can be pleased with what was a very positive performance and something to build on in the coming weeks.