Two of the Dundalk FC Academy sides were in action in the EA Sports National Underage Leagues on Sunday afternoon, with mixed results for both sides.

In the one and only competitive game at Oriel Park this weekend, Dundalk U15s hosted Athlone Town at 1pm. Coming into the game off the back of a defeat to Galway United last week, the Lilywhites were keen on picking up their maiden win of the 2022 campaign.

The hunger of the home side was evident from the off and they made their early dominance count as they took the lead after just four minutes, when Luke Mulligan was on hand to head home from a Cian Murphy corner.

Despite some opportunities for the visitors, it was Dundalk who almost doubled their advantage as the first period came to a close, as Cian Spaight broke through the opposition defence before drilling a ball across goal to Runako Sweetman, who rushed his effort and scuffed it straight at the goalkeeper. 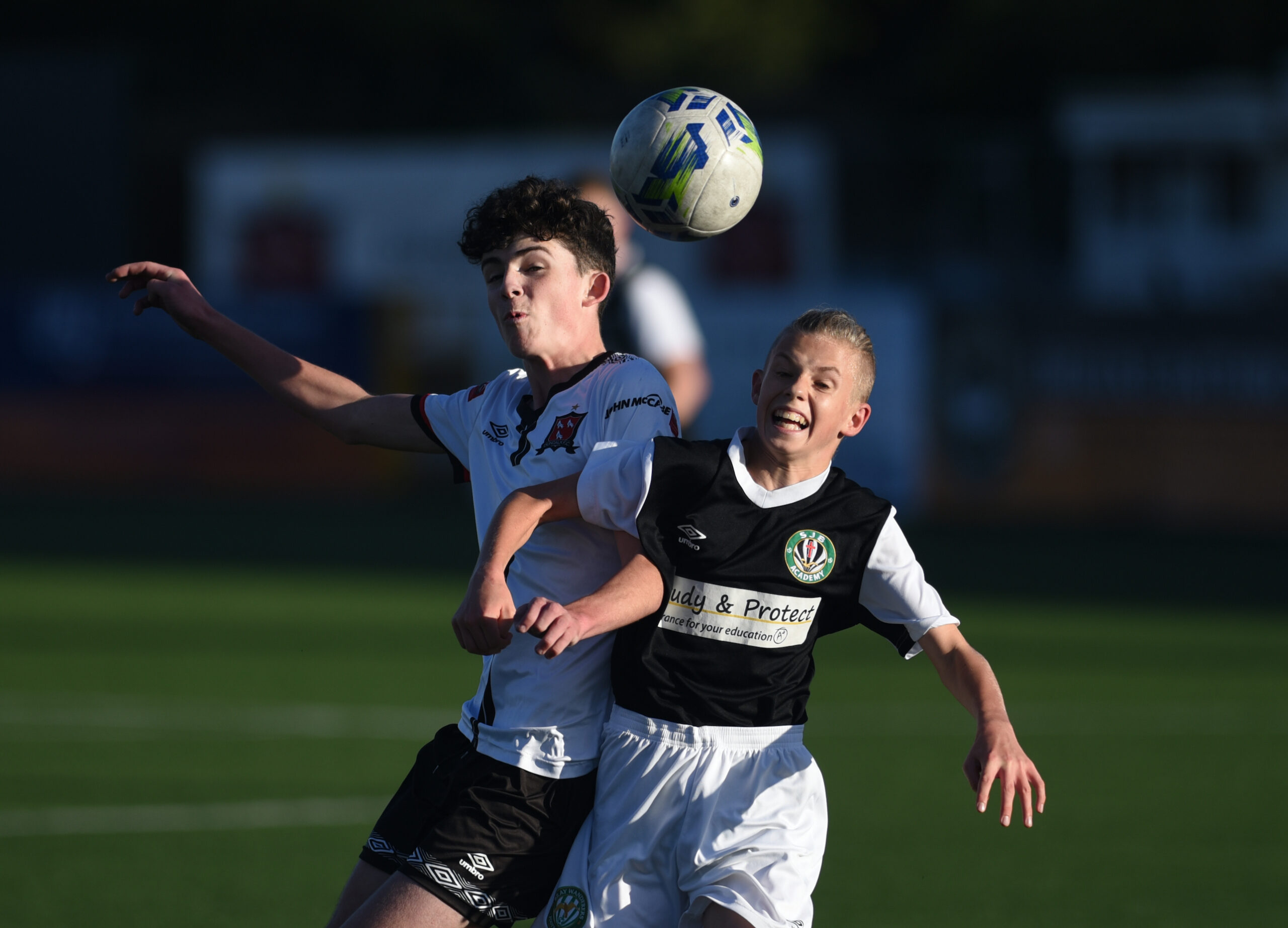 Luke Mulligan challenges for the ball.

The visitors had the better of the early exchanges in the second period, but struggled to break through the Lilywhites’ backline, and Luke Mulligan in particular, with the Ireland U15 international producing a brilliant defensive display on the day.

Just as the game was reaching a fever pitch, it came to a shuddering halt, as Dundalk goalkeeper Calum O’Reilly went down with a head injury after colliding with the post after a free kick. After a lengthy spell receiving treatment, he was deemed unable to continue, and was replaced by forward Jayden Clarke, who bravely stepped into the role in O’Reilly’s absence.

Athlone got back into the game as things got underway again, and capitalised on the unsettled Lilywhites to equalise through Jack McCann in the 65th minute following a quality counter attack.

The third period was dominated by Dundalk as they searched for a winner, but disaster struck in the 92nd minute, as Daniel Krasterbergs broke away on the counter to score and steal all three points for Athlone Town.

In the other fixture of the day, Dundalk U19s travelled to Navan to face Drogheda United in their first Louth Derby of the season.

In what is always a tight and tense fixture, it was Ebuka Kwelele who rose to meet the challenge, bagging two excellent goals to secure the three points for the Lilywhites and a return to winning ways.

It wasn’t all smooth sailing for the away side though, as Drogheda kept things close through a goal from former Dundalk academy player Stefan Ugbesia, but they couldn’t find an equaliser as Tiarnan Mulvenna’s side took maximum points.