Three of the Dundalk FC Academy teams were in EA Sports National Underage League action, with a mixed bag of results for those involved.

In the first action of the weekend, Roberto Bonello’s WU17 side hosted Peamount United at Oriel Park on Saturday morning. In a tense first half, Peamount controlled the ball in the early stages, but struggled against Dundalk’s pressing, which presented chances for the Lilywhites in the opening twenty minutes.

After keeping the hosts pinned in their own half for a spell, Peamount found the breakthrough, as goalkeeper Emma Goodman was unlucky to be beaten by a drilled effort into the bottom corner.

The Lilywhites weren’t fazed after the concession and struck back just two minutes later, winning a penalty after Grace Kelly was bundled over in the box. Kelly stepped up to take the spot kick and she hammered home to equalise for Bonello’s side. 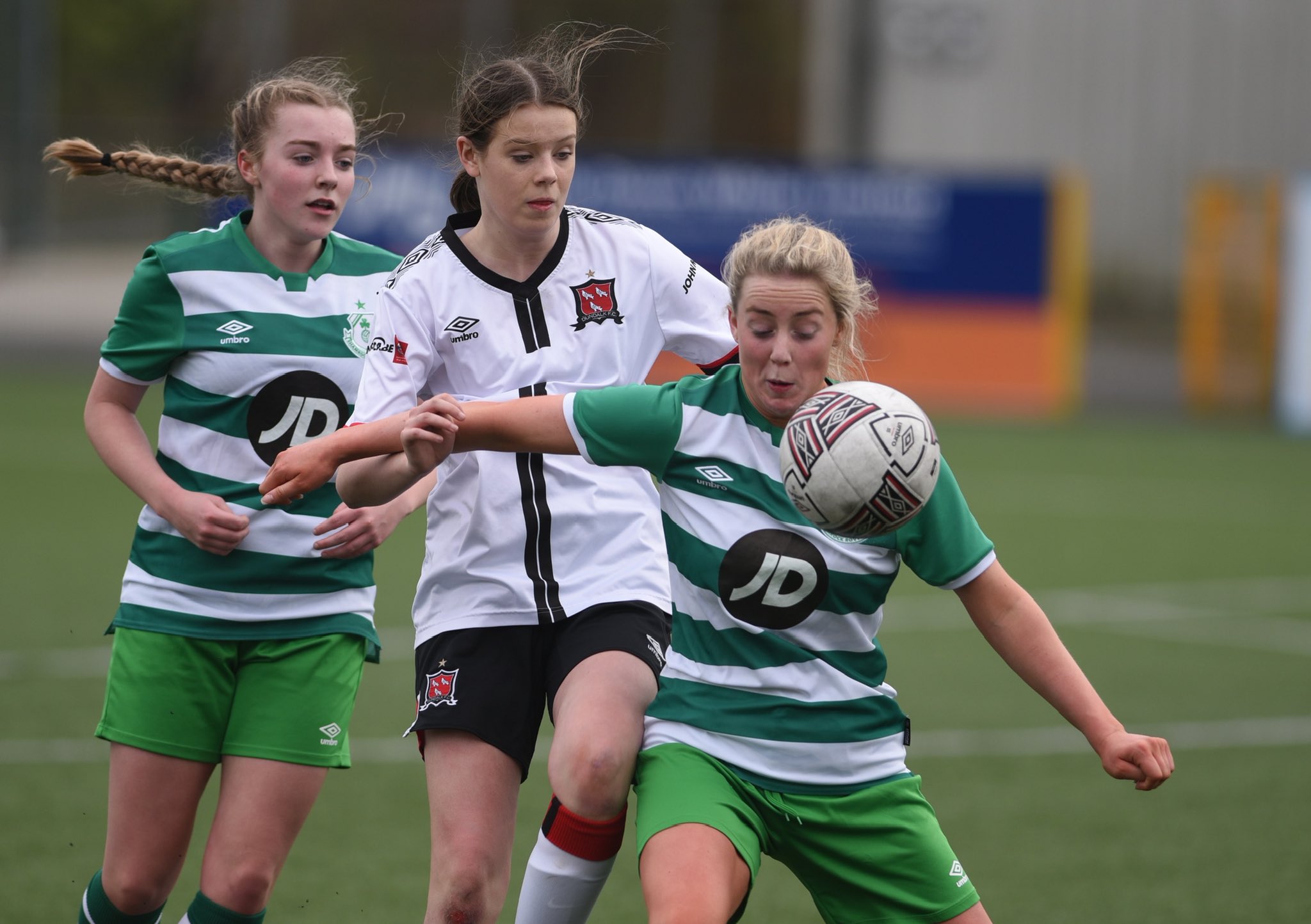 Grace Kelly was on the scoresheet once again for the WU17s

The sides went in level at the break, and were evenly matched early in the opening minutes of the second period, with both sides creating goalscoring opportunities, with Sarah McSherry going close with an effort ten minutes in.

Peamount managed to gain the upper hand for a spell, and they took the lead just before the hour mark. They were given a free-kick on the edge of the box, and the subsequent strike was placed just out of Goodman’s reach and into the net.

Dundalk pushed for an equaliser as the game entered the final minutes, and had a good chance put over by Molly Williams, who played well on the day, but the Lilywhites couldn’t find a breakthrough as Peamount left with all three points.

In the second game of the weekend, Dundalk U17s hosted Finn Harps on Saturday afternoon. The game began at a frantic pace, as Dundalk gained the upper hand and pinned Harps back with their aggressive pressing.

The visitors struggled to maintain possession for extended periods in the first half, as Dundalk harried them all over the pitch and forced them into mistakes.

The Lilywhites had a couple of goalscoring opportunities just before the half hour mark, but it was Finn Harps who took the lead on 32 minutes against the run of play, with captain Mark McGlynn providing the finishing touch.

Dundalk should’ve been level less than two minutes later, as Eoin Kenny, who had a huge influence on proceedings, missed a couple of good opportunities from close range.

The Lilywhites finally found their equaliser just before the break, as a cutback found Hugh Smith, who rifled his effort into the top corner.

Dundalk continued the second half in a similar vein to the first, with their relentless pressing causing problems for Finn Harps, who were struggling to keep up with the high tempo being set by the hosts.

It took just eight minutes of the second half for the Lilywhites to take the lead, as Jake Hough latched on to Hugh Smith’s flick on before drilling his effort into the bottom corner.

The hosts eased off slightly after taking the lead, but were still creating chances. Finn Harps began to push forward as the game entered the final ten minutes as they searched for an equaliser, but were leaving themselves open to a counter attack. 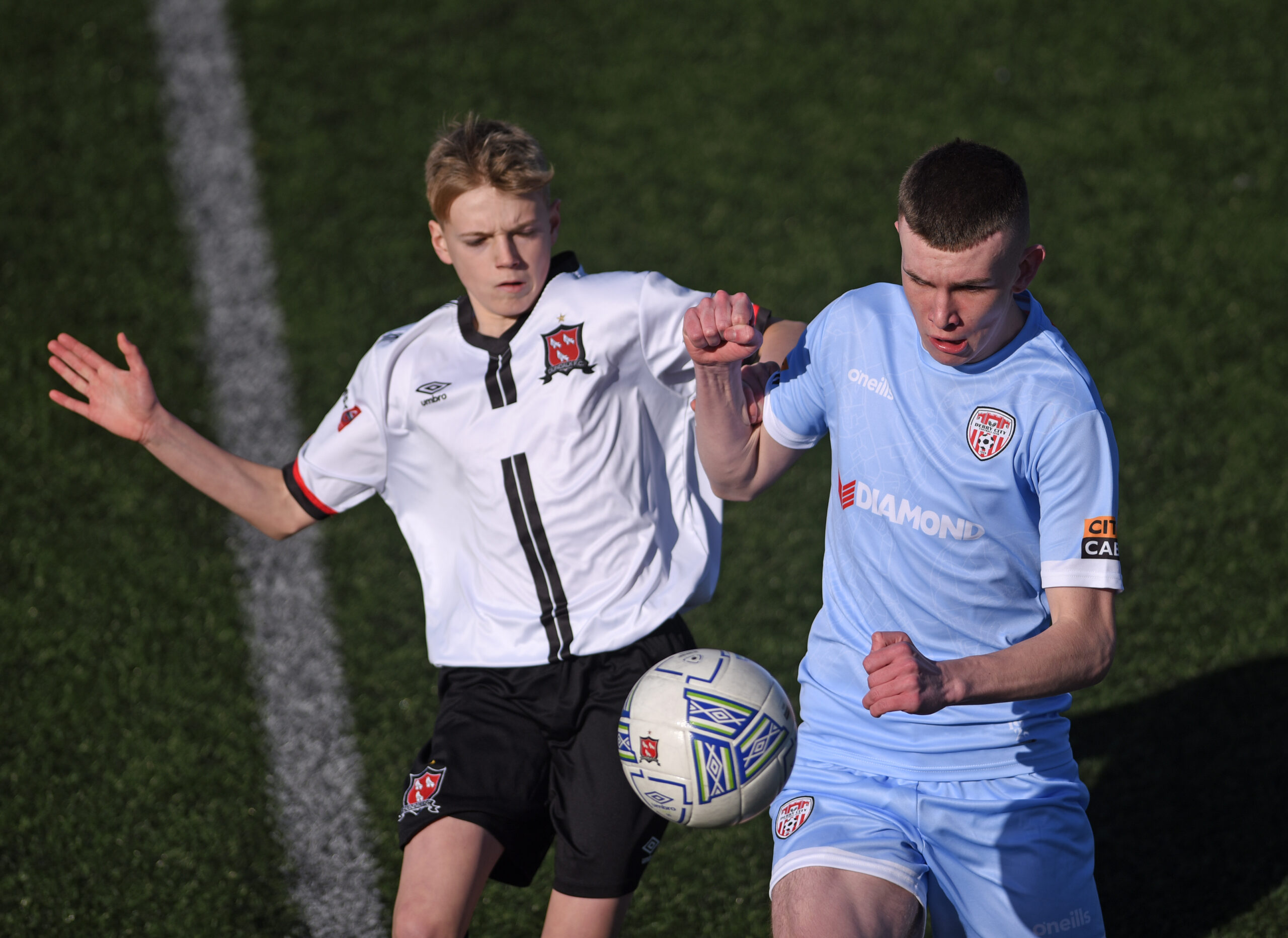 Jack O’Flaherty of the U17s

Dundalk took full advantage of the gaps in the Harps back line with seven minutes to go, as Josh Hand went on a solo run down the left, playing a one-two with Kenny before sliding the ball through the goalkeeper’s legs to gain a two goal lead for the home side.

However, it wasn’t all smooth sailing for the home side, as Nathan McDaid finished off a slick Finn Harps attack with three minutes remaining to set up a tense finish. The final minutes of stoppage time were made even more tense after Dundalk were reduced to ten men, with Josh Hand sent off for dissent, but the hosts held on to secure a well deserved three points after another brilliant performance.

In the final action of the weekend, the Dundalk FC U19s hosted Shelbourne on Sunday afternoon. It was a day to remember for Tiarnan Mulvenna’s side ran out 4-1 winners.

It was the Lilywhites who opened the scoring 17 minutes in, with Michael Soyemi providing the finish. Soyemi soon added a second, but Shels responded shortly before the break through Francis Campbell.

Dundalk regained their two goal advantage early in the second half through Dualta Honey, before Oisin Coleman secured all three points for the hosts to make it four games unbeaten for Mulvenna’s side.