CHINO LOOKING TO MAKE HIS MARK AT ORIEL

CHINO LOOKING TO MAKE HIS MARK AT ORIEL

After causing quite a stir off the field last year, new Dundalk signing Jesus ‘Chino’ Pérez is hoping to become a social media star for his actions on it this season after completing a move to the Lilywhites before the end of the transfer window.

Chino spent a couple of weeks on trial at Oriel Park at the beginning of 2020, inadvertently breaking the news himself thanks to the bio on his Tinder profile which read: ‘Footballer for Dundalk FC’.

The story went viral around the world but the 23-year-old Illinois native opted to return to the USA after being picked by New York City FC in the 2020 MLS SuperDraft.

He subsequently moved to Seattle-based outfit Tacoma Defiance in February and made 16 appearances for the USL Championship side, scoring three times, but when his contract expired at the end of the season, it paved the way for a return to Dundalk.

“I had a couple of other contract offers from the USL and USL League One but when I got offered this one from Dundalk, it was a no brainer and I wanted to come back,” he told dundalkfc.com. “I enjoyed my time here last year with the guys, I got to know them a bit, and the style of football really suits me.

“The Tinder stuff? That was just me being a bit immature,” he smiled. “I’m happily married now and I’ve grown up a lot more so you definitely won’t be seeing me on that anymore!”

Pérez had the unique distinction of making a ‘double debut’ for the club after coming off the bench twice in last Friday’s pre-season friendly win over Bohemians.

His first taste of the action came midway through the first half when he replaced Ole Eriks Midtskogen and after going off at half-time, he reappeared again in the second half as a substitute for David McMillan, leading to various tweets about the ‘second coming of Jesus’ on social media!

“Brian Gartland came up to me after the game and congratulated me on making two debuts,” he laughed. “It was important for me to get some minutes and it was a chance for me to show my abilities and help the squad.” 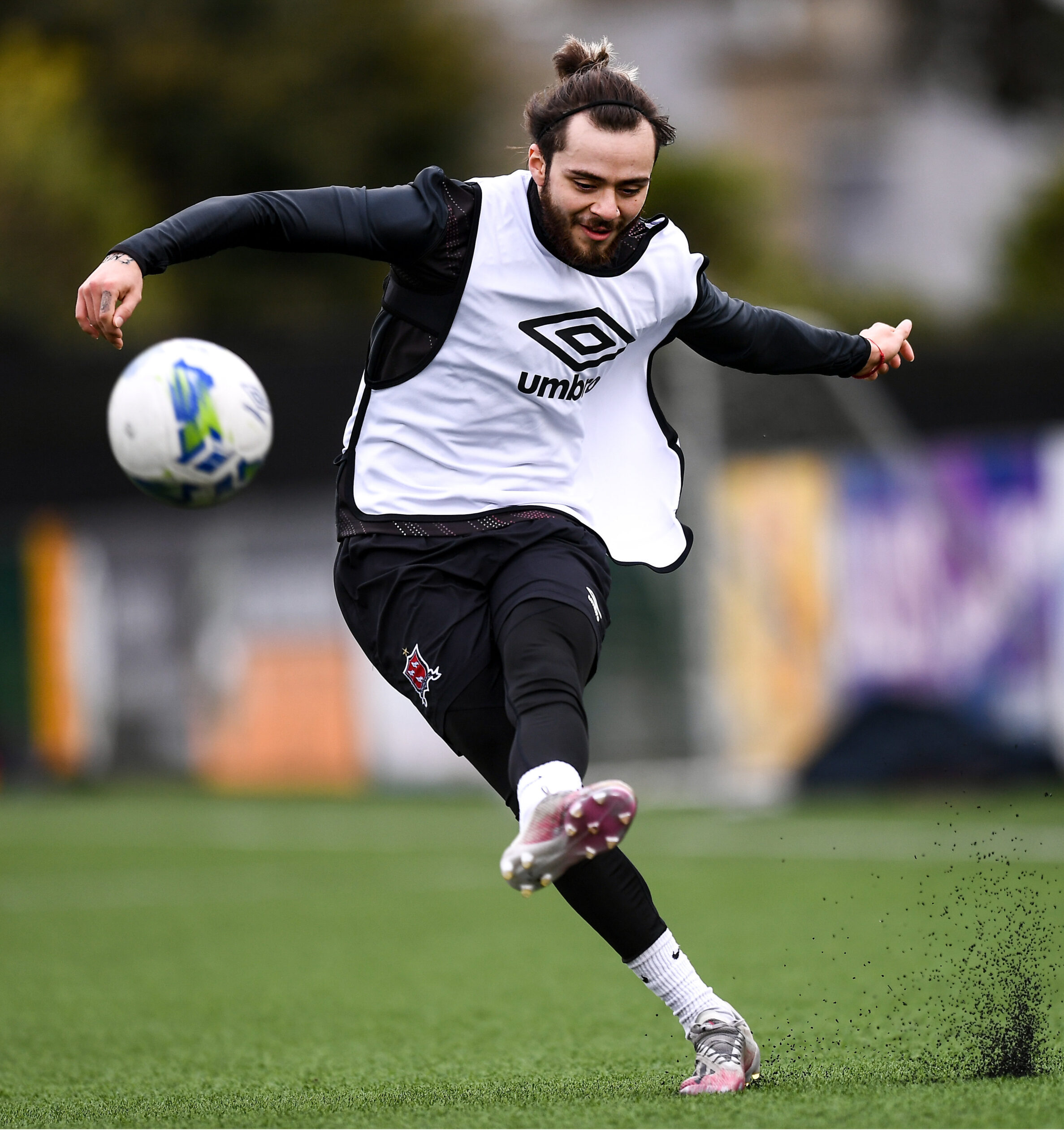 Pérez wore number 24 against Bohemians but will become the first player in the club’s history to adorn the number 90 shirt when the competitive football begins with the FAI President’s Cup tie against Shamrock Rovers on March 12th.

“My first professional number was 90,” he explained. “I wore 10 when I was at college but it wasn’t available so I’m happy to wear 90. I’m going to try and make my own legacy wearing it.”

Chino has set himself a number of personal goals for the season ahead. His first task was earning a contract, and a place in the Lilywhites first-team dressing room, and with that checked off the list, he is now determined to become a regular in the Lilywhites squad on match days.

“I’ve set levels for myself and the next goal is to get myself into the squad of 18 for match days,” he said. “In the first half against Bohemians they played me out wide and when I came back on I played up top.

“I’m comfortable anywhere along the front three and I hope to make an impact when I get to know the league a bit more and settle into the style of play.

“Last year was great for me,” he added. “It was my first professional year and it was a new experience, getting a feel for that environment and that level and getting used to the pace of the game.

“It was definitely a learning experience. I had to deal with things I had never dealt with before and it was good. Now, I’m in my second year and I can definitely improve at Dundalk based on the experience of that.”

Off the field, Chino has also set some targets. Plans are currently afoot for his wife to move to Ireland in the coming months and start their married life together.

“It’s really tough at the minute,” he said. “We only got married in January and we’re trying to figure out what to do but I hope to get her over here so we can move into an apartment and start our lives together.”