Dundalk FC is aiming to break the League of Ireland attendance record – virtually – in order to raise funds for ex-ladies player Sonia Hoey.

Sonia, who scored the winner for Dundalk City in the Women’s FAI Cup final in 2005, was diagnosed with stage three cervical cancer in February 2019. She had been in remission for almost a year when the cancer returned.

Her family recently established a #SaveOurSonia campaign to raise vital funds for treatment in Mexico, hitting their €80,000 GoFundMe target in a matter of days.

However, Dundalk FC is aiming to raise further funds for the 42-year-old’s ongoing treatment by selling virtual match tickets for the Louth Derby against Drogheda United on April 24th. Interestingly, their opponents won the Men’s FAI Cup the same year as Sonia’s goal clinched the Ladies’ final.

The Lilywhites are aiming to smash the League of Ireland attendance record – which stands at 7,522 for the club’s tie at Tallaght Stadium against Shamrock Rovers last season – by selling virtual match tickets for the first SSE Airtricity League Louth Derby since 2017.

“We’re delighted to launch this #DerbyForSonia campaign to raise as many funds as possible for her treatment,” said Dundalk FC sporting director Jim Magilton. 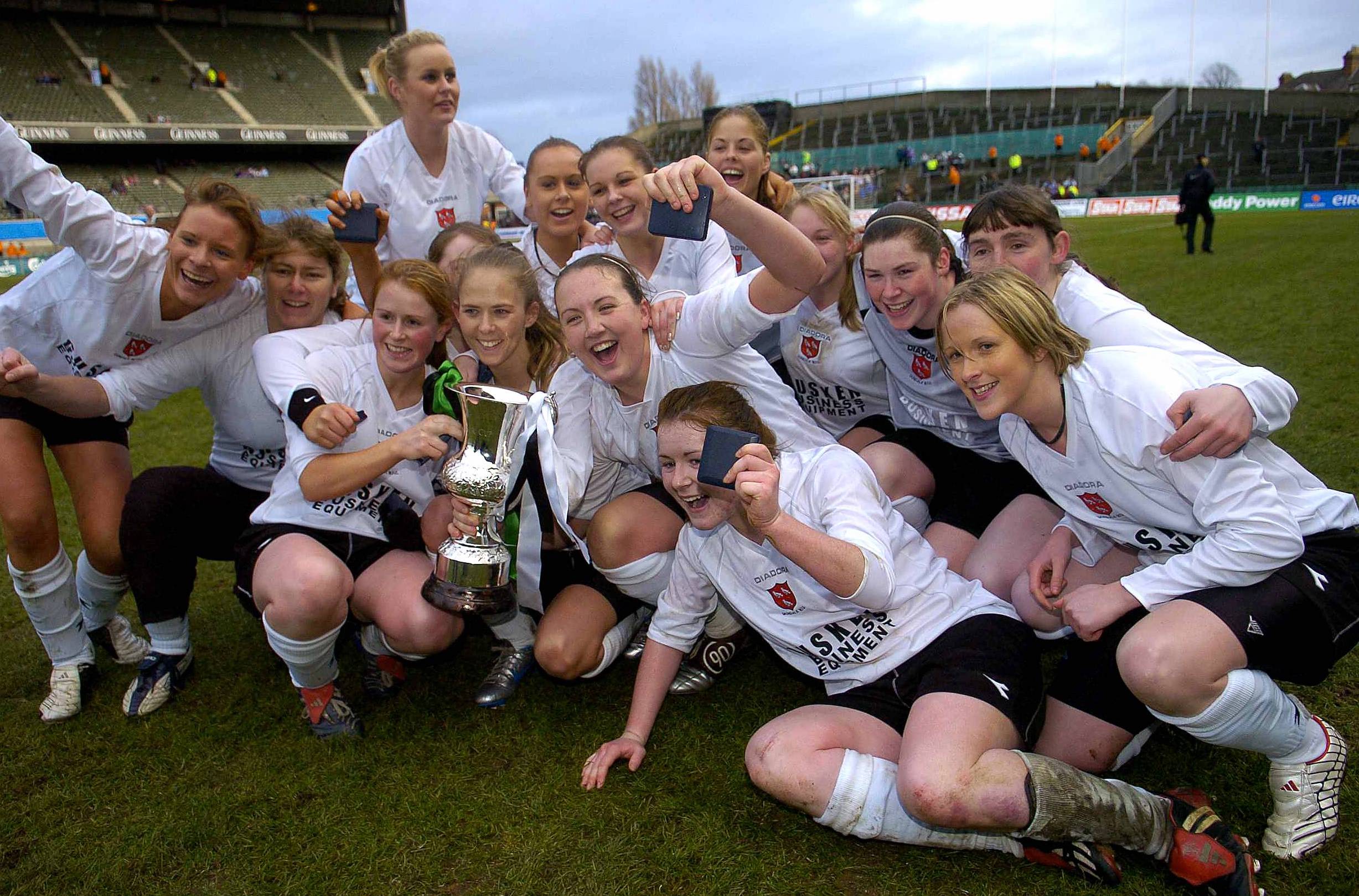 The Dundalk City team, with Sonia Hoey holding the trophy, celebrates with the WFAI Cup after their win over Peamount United in the 2005 final at Lansdowne Road. Picture credit: Brian Lawless / SPORTSFILE

“We encourage the whole of the Irish football community to get together and support this cause and smash the league’s attendance record.

“We would love to sell at least 8,000 virtual tickets for the match against the Drogs, which would raise an incredible €40,000 for her. Sonia’s story has really touched our hearts at the club and we are honoured to do our bit for her campaign.”

“As teammates and friends of Sonia, we would ask everyone, from the bottom of our hearts to please support #DerbyforSonia and give an amazing person the opportunity to receive life-changing treatment in Mexico,” said Tara Nevin, captain of the 2005 cup-winning team.

“Football has always been such a huge part of Sonia’s life and now more than ever she needs the Irish football family to shine a beacon of hope into her life, and raise the much-needed funds to make this happen.

“Individually we are one drop. Together we are an ocean. C’mon the Town!”

Virtual tickets are priced at €5 and are available now from shop.dundalkfc.com. All proceeds will go to the #SaveOurSonia campaign.