Dundalk continued their stunning home form on Friday night with a 3-0 win against Finn Harps to make it nine wins on the bounce at Oriel Park.

First half goals from Darragh Leahy, Keith Ward and Steven Bradley were enough to seal all three points on a summer’s night on the Carrick Road.

There were two changes to the starting XI from the side which drew 1-1 with St. Patrick’s Athletic seven days ago for Stephen O’Donnell as Steven Bradley and Paul Doyle came in for Robbie Benson who picked up a shoulder knock last week and Mark Connolly who has been recalled by Dundee United.

It was a blistering start from the Lilywhites as they almost took the lead through Leahy in the opening minutes when he attempted to catch Mark McGinley off guard at his near post but the goalkeeper recovered well to push it wide for a corner.

It was from that corner though that Leahy would give the side the lead when he was first to react to Steven Bradley’s shot, which was charged down, on from Ward’s quick corner to fire to the net.

That was on four minutes and on six the advantage was doubled when a quick breakaway saw Bradley find himself through on goal but he unselfishly squared it to Ward who passed the ball to the empty net.

It could have been 3-0 just before the 20 minute mark when Patrick Hoban found space but could only fire just wide of the right hand post.

Harps did have a chance to pull one back when Ethan Boyle’s long throw wasn’t dealt with in the 20th minute but Robert Jones’ header was just over the bar.

Ryan Rainey then forced a good save from Peter Cherrie and Sam Bone cleared the danger as Jones closed in on goal to maintain the two goal lead. 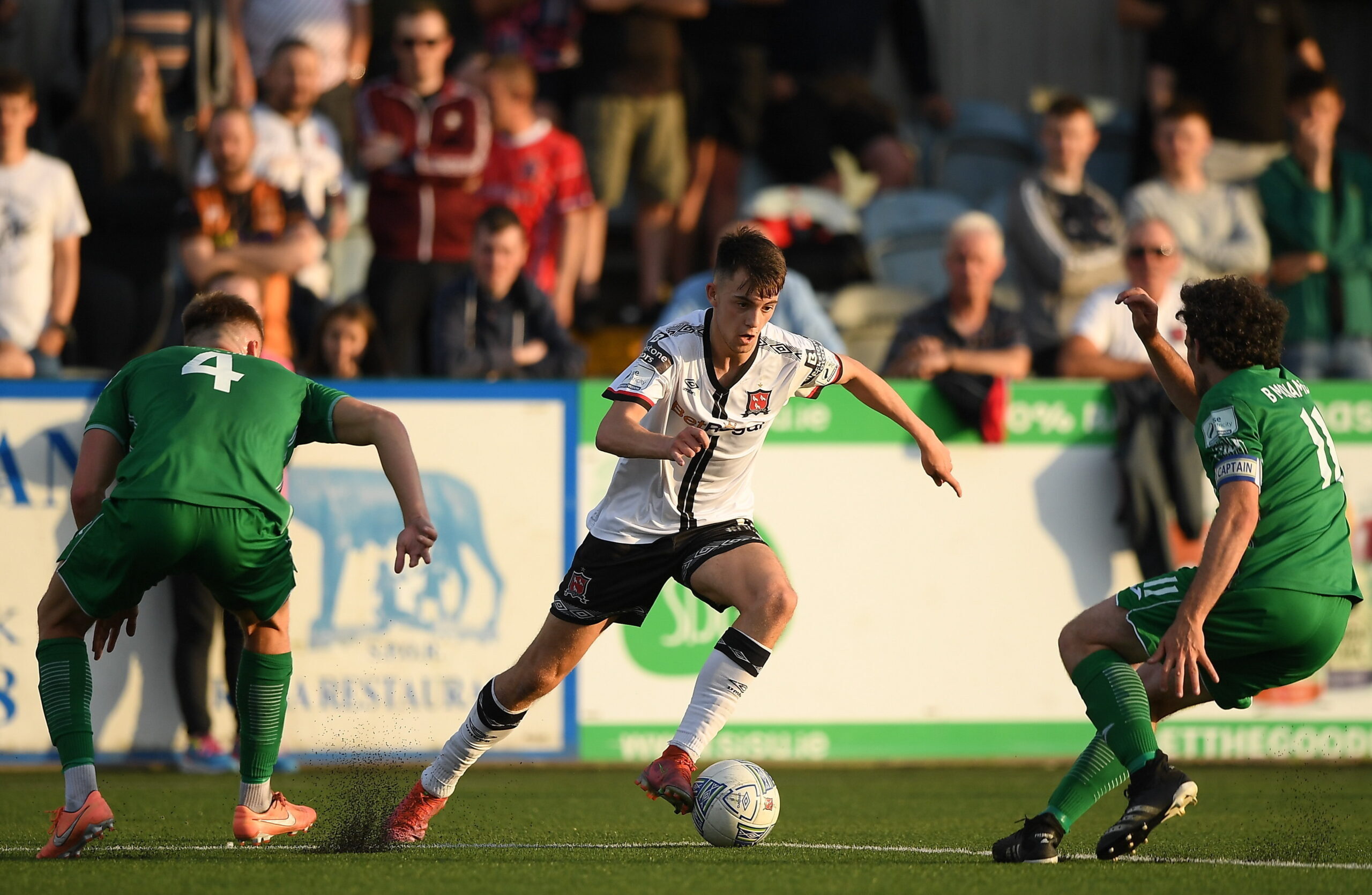 The Harps pressure wore off and Dundalk responded in the most resounding fashion possible when Bradley showed some quick feet to create space for himself 30 yards from goal and unleashed a simply stunning drive to give McGinley no chance in goal.

The visitors started the second half the stronger and looked like they got off to the ideal start when Conor Tourish met a Barry McNamee free-kick on the volley but Peter Cherrie produced a stunning save to keep it out.

Ward almost got his second of the match when his clever curling effort came crashing off the post and Hoban ought to have got his first of the night on the hour mark but he glanced a header just wide from Bradley’s cross. 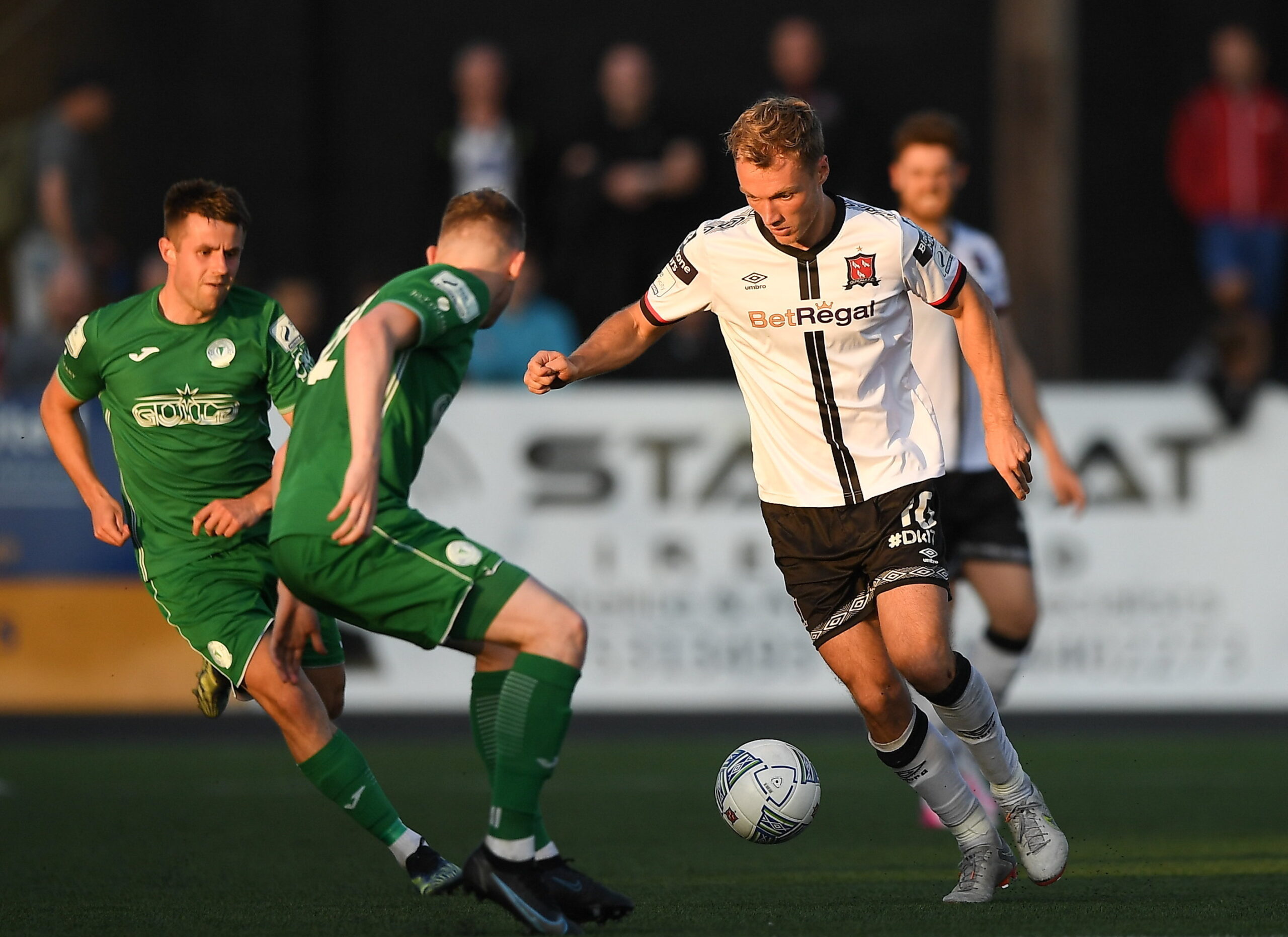 Greg Sloggett gets past Ryan Rainey. Photo by George Tewkesbury/Sportsfile

Lewis Macari almost found another assist when his cross was met by Leahy but he couldn’t direct it goalwards.

The biggest cheer of the night was reserved for John Mountney who rejoined the club in December after a year away and 11 months on from suffering a cruciate ligament injury. The Mayo man received a standing ovation on his return.

There would be no action of note following Mountney’s introduction and O’Donnell’s troops saw the victory out to return to second place in the table.