Georgie Kelly returned to haunt his old club as Dundalk’s difficult start to the SSE Airtricity League Premier Division continued with a 1-0 defeat by Bohemians at Oriel Park on Friday night.

With both teams desperate for a first win of the season, Dundalk showed more intent in the early moments and almost had the lead in the fourth minute when Andy Boyle’s header came back off the crossbar.

However, with their first attack, Bohs got their noses in front as Daniel Cleary fouled Ross Tierney just inside the box and ex-Lilywhite Kelly coolly converted from the spot.

There was little in the way of clear-cut chances but Dundalk should have equalised before the hour-mark when the ball kindly came to Sam Stanton, but from close range, James Talbot produced a superb point-blank stop.

And that proved a match-winning save as Bohs held firm, leaving the 14-time champions – who roared loudly for an 88th-minute penalty – still searching for their first league victory of 2021. 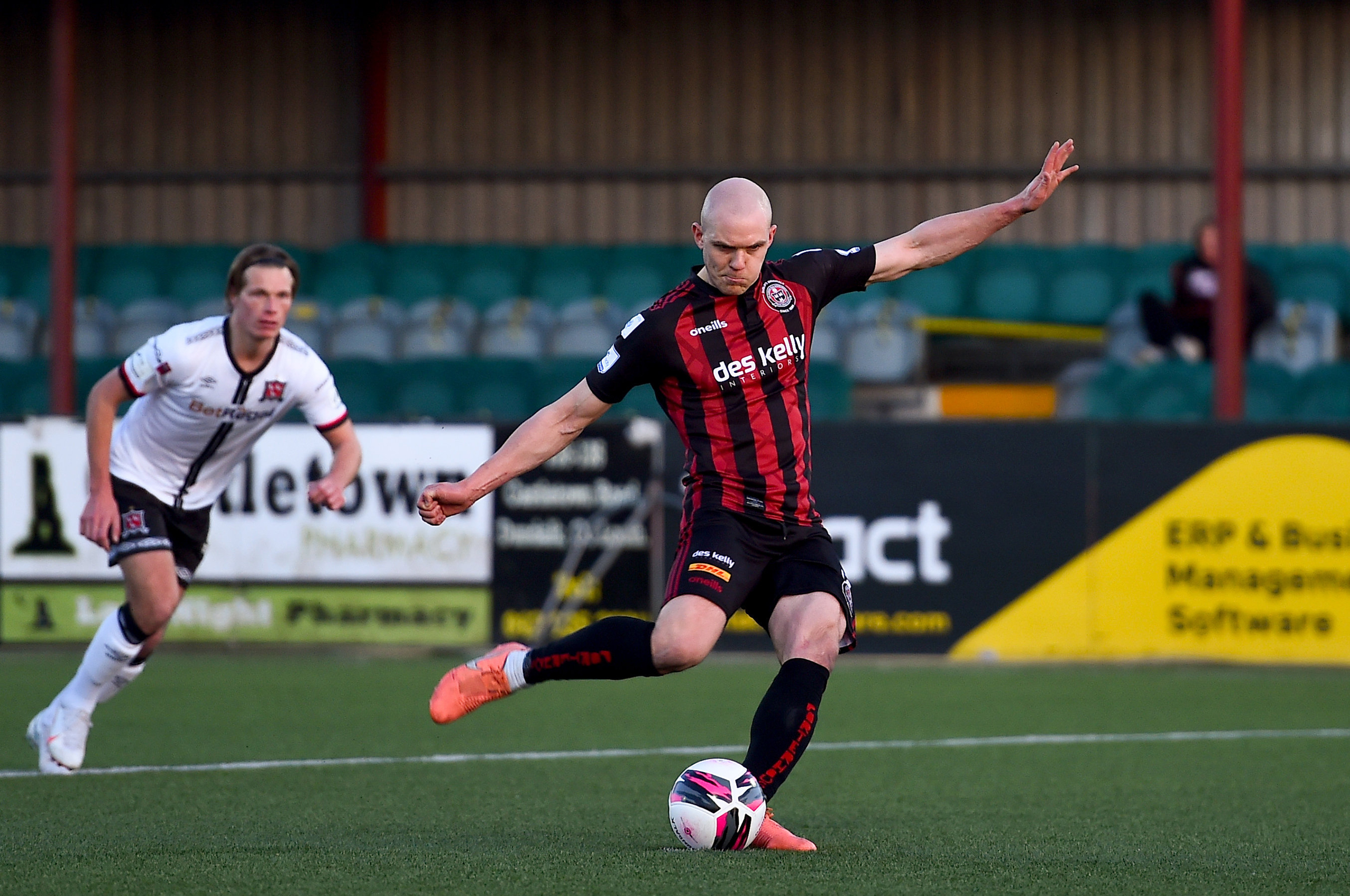 Georgie Kelly of Bohemians shoots to score his side’s first goal, a penalty, during the SSE Airtricity League Premier Division match between Dundalk and Bohemians at Oriel Park. Photo by Ben McShane/Sportsfile

Dundalk made three changes from their defeat by Shamrock Rovers in the capital a week earlier as Peter Cherrie, Han Jeongwoo and Ole Erik Midtskogen were all handed starts in place of Alessio Abibi, Brian Gartland – who faces a long-term absence – and Ryan O’Kane.

It was a landmark evening for Patrick Hoban who made his 200th appearance for the club, while Cherrie was starting in goal for Dundalk for the first time since the league-winning night of 2014.

It was a bright start from the Lilywhites. Bohs centre-half James Finnerty picked up a yellow card as early as the third minute when he dragged down a threatening Jeongwoo just outside the area. From that, Michael Duffy clipped in a free-kick which was headed off the bar by Boyle.

On 11 minutes, Hoban found Latvian international Raivis Jurkovskis and, from a tight angle on the right, he flashed a shot across the face of goal. 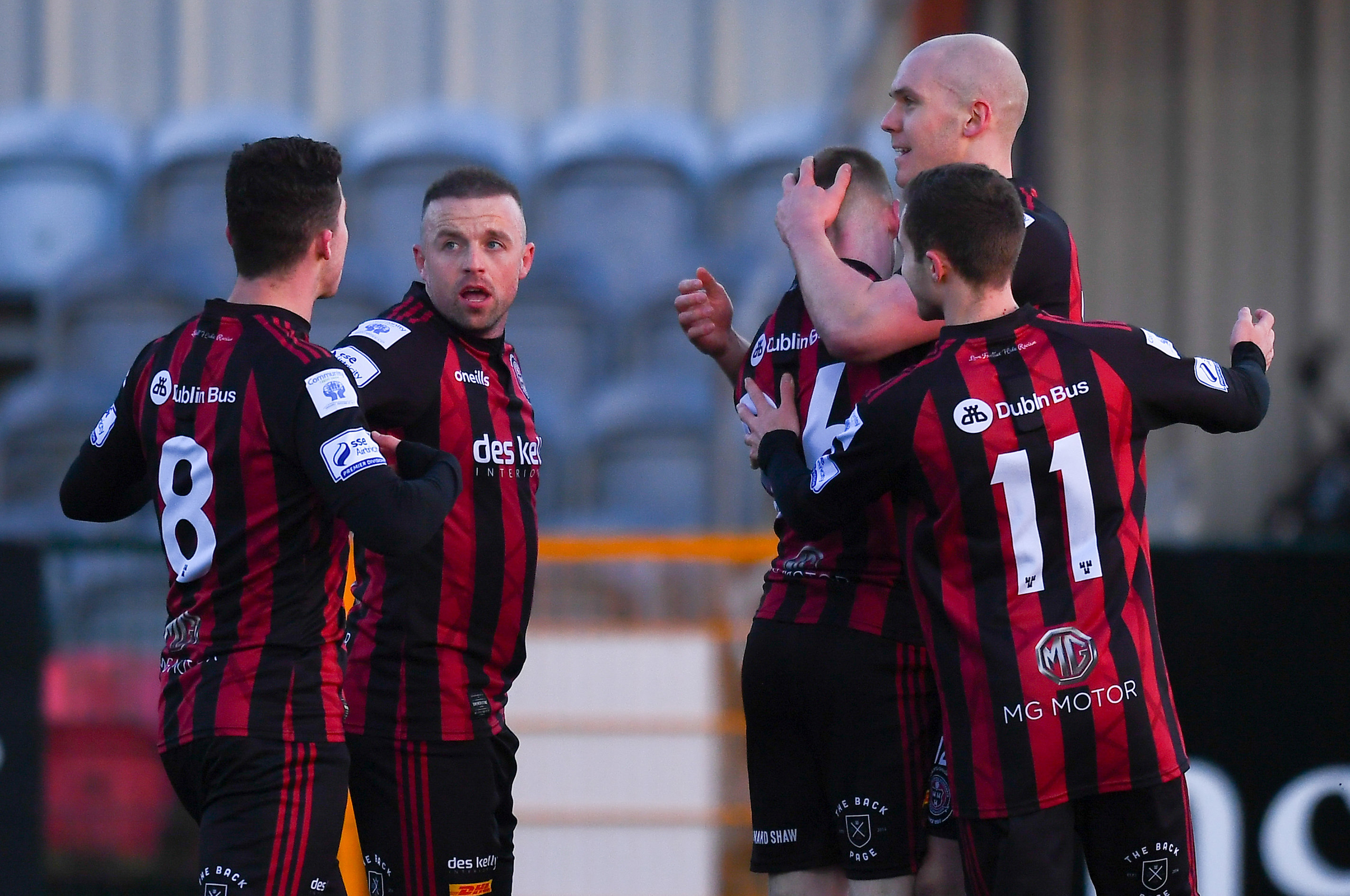 Georgie Kelly, second from right, celebrates with his Bohemians team-mates after scoring his side’s first goal, a penalty, during the SSE Airtricity League Premier Division match between Dundalk and Bohemians at Oriel Park. Photo by Ben McShane/Sportsfile

However, within sixty seconds, Dundalk were stunned as referee Robert Harvey pointed to the penalty spot after Cleary brought down Tierney, Hoban receiving a caution for dissent in the aftermath. Kelly – prolific from the bench during his spell at Oriel Park – stepped up and slotted into bottom corner.

That had come against the run of play and, after it, Dundalk continued on the front foot. Midway through the half, Midtskogen showed good feet down the right and dug out a cross which Hoban attacked at the near post, but the Bohs defence cleared behind for a corner which came to nothing.

On 26 minutes, the hosts were more threatening from that source when Hoban nodded over from Duffy’s delivery, Dundalk’s striker appealing for a penalty after coming under pressure from Rob Cornwall.

Ten minutes before the break, Bohs skipper Keith Buckley fired wide from range as the visitors started to see more of the ball. As they continued to come more into it, Liam Burt drove inches past the post, as the Gypsies confidently took their lead into half-time. 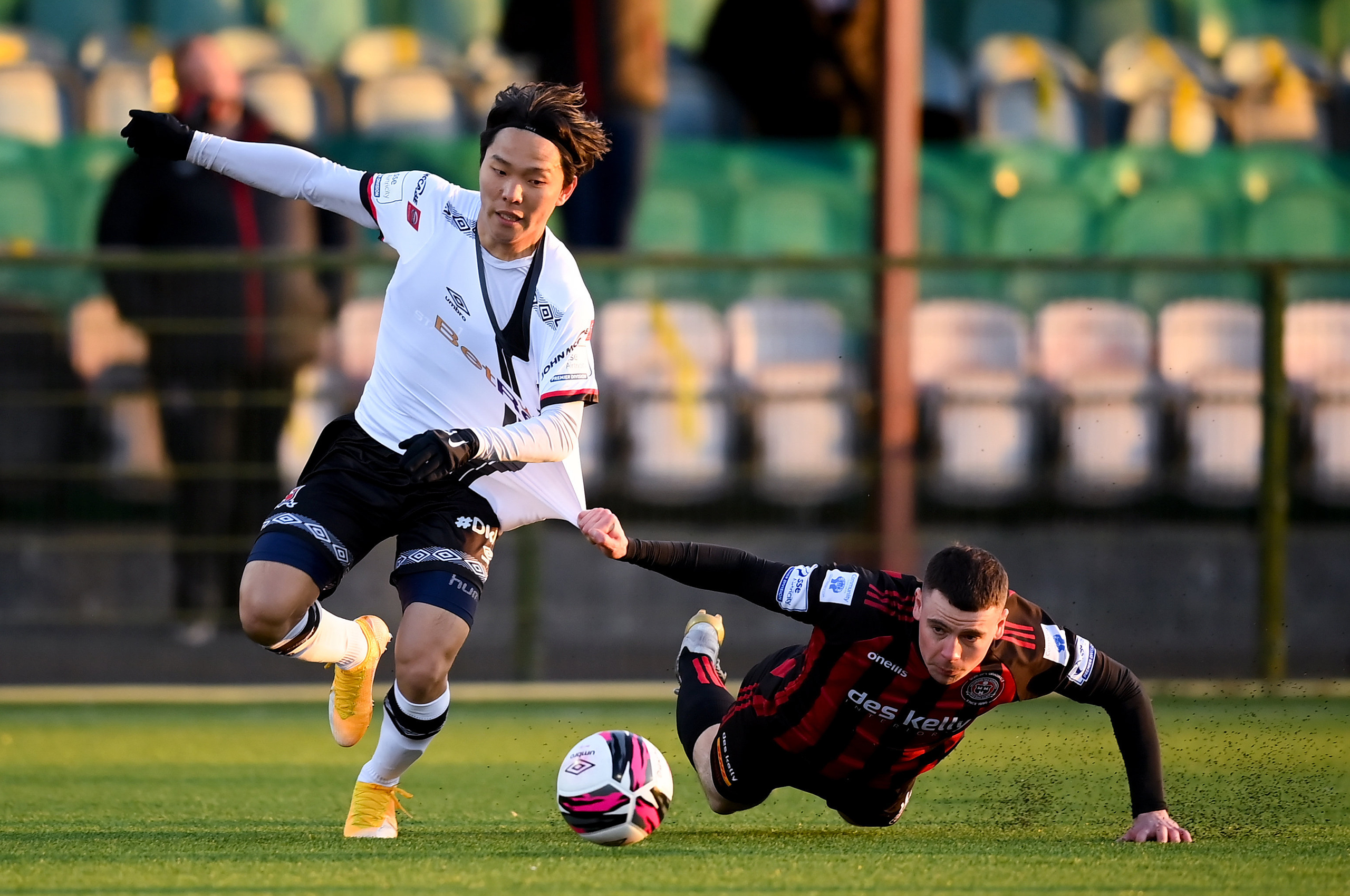 Han Jeongwoo of Dundalk in action against James Finnerty of Bohemians during the SSE Airtricity League Premier Division match between Dundalk and Bohemians at Oriel Park. Photo by Stephen McCarthy/Sportsfile

At the interval, Jeongwoo was sacrificed for Patrick McEleney as Dundalk looked for some inspiration. Six minutes after the restart, Bohs lost Andy Lyons through injury, with Rory Feely replacing the right-back.

On 54 minutes, McEleney’s free-kick – from a promising position 25 yards out – was easily collected by Talbot. Talbot was seriously tested five minutes later when the ball fell to Stanton but, from no more than 10 yards, the Bohs ‘keeper denied the Scottish midfielder with a brilliant save.

Under pressure for a result, Dundalk called on their reserves on 64 minutes as David McMillan, Junior Ogedi-Uzokwe, and Darragh Leahy were thrown on but Bohs continued to threaten. On 68 minutes, substitute Rory Feely floated in a cross which Tierney attacked and Dundalk were relieved to see the effort go off target. Dundalk survived again moments later when Finnerty diverted the ball over from underneath the bar before Cornwall headed wide as Bohs sought a second.

Into the final ten minutes, Junior had a penalty appeal turned down, and there was an even louder shout in the 88th minute when substitute Leahy crossed into the box but an apparent handball by Cornwall was missed by the officials, as Dundalk suffered a third straight defeat.