Patrick Hoban hit a 10-minute hat-trick as Dundalk booked their place in the quarter-finals of the Extra.ie FAI Cup with a 5-1 win over St Mochta’s at Oriel Park on Friday night.

Sami Ben Amar scored his first goal for the club to give Dundalk an early lead but Gareth McCaffrey levelled things to give the Leinster Senior League leaders a real boost going into the break.

Vinny Perth’s men stepped it up after the interval, though, and Hoban overtook Eddie Carroll in the club’s list of record goalscorers with his flurry, the first coming from the penalty spot. Hoban now has 115 goals for Dundalk, just 27 short of the great Joey Donnelly.

Han Jeongwoo added a fifth late on as the Lilywhites booked their place in next Tuesday’s quarter-final draw to keep their hopes of a record-breaking seventh successive cup final appearance alive. 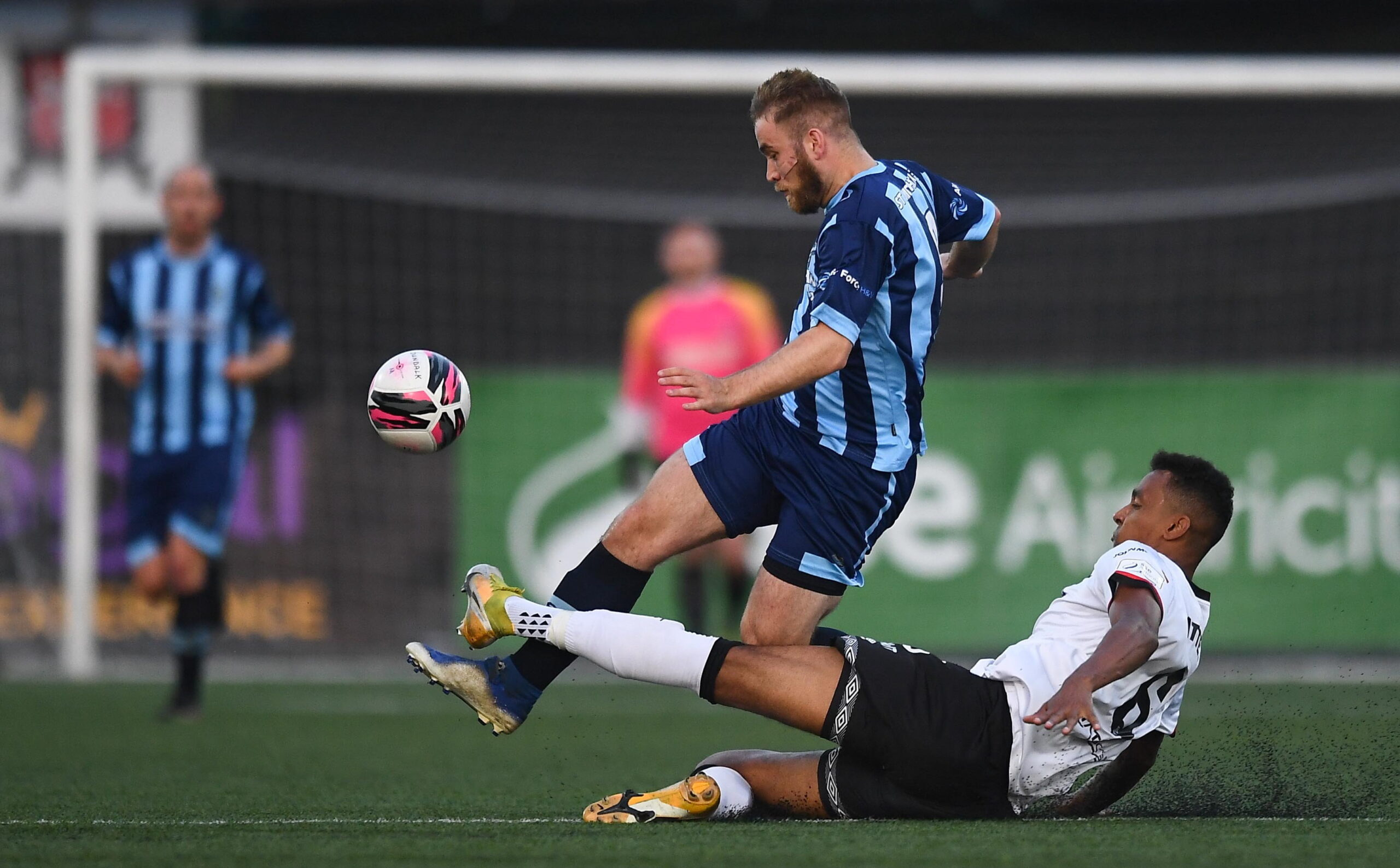 Gareth McCaffrey of St Mochta’s is tackled by Sonni Nattestad of Dundalk during the extra.ie FAI Cup second-round match at Oriel Park in Dundalk. Photo by Ben McShane/Sportsfile

Perth handed new goalkeeper Cameron Yates his debut for the club while Wilfried Zahibo, Han Jeongwoo and Ben Amar all started but a host of injuries meant the Lilywhites head coach could only name seven players on the bench.

Mochta’s, who arrived on the back of five straight wins from their opening five games in the Leinster Senior League named a side that wasn’t low on League of Ireland experience. Two former Dundalk players, Mick Daly and Gareth Brady both started, while another ex-Lilywhite, Cathal O’Connor, was on the bench for Brian McCarthy’s FAI Intermediate Cup holders.

Dundalk took the lead with virtually their first attack. Sean Murray’s corner caused havoc in the Mochta’s six-yard box and Ben Amar peeled off the goalkeeper to head home from close-range with just eight minutes played.

Mochta’s looked shaken and Cameron Dummigan thought he had doubled the lead in the 10th minute when he curled an effort over Adam Kmet but the ball hit the underside of the crossbar and bounced away with referee Graham Kelly ruling that it didn’t cross the line. The replays suggested otherwise.

Brian McCarthy’s side pulled level in the 13th minute. Sam Stanton got his feet stuck on the edge of the box, allowing Karl Somers an opportunity to pick his pocket and Gareth McCaffrey pounced on the loose ball, rounding Yates to roll home the equaliser.

Ben Amar was then hacked down in the box with no penalty given and the ball broke to Han but his effort from the edge of the area was easily gathered by the goalkeeper. Stanton then forced a good save from Kmet when his volley was palmed away and the Scottish midfielder had a second effort charged down shortly after.

Dummigan again had a shot from distance saved by the Mochta’s netminder and Kmet produced the save of the match before the interval when he managed to keep out Hoban’s header from point-blank range after Murray’s perfect cross. 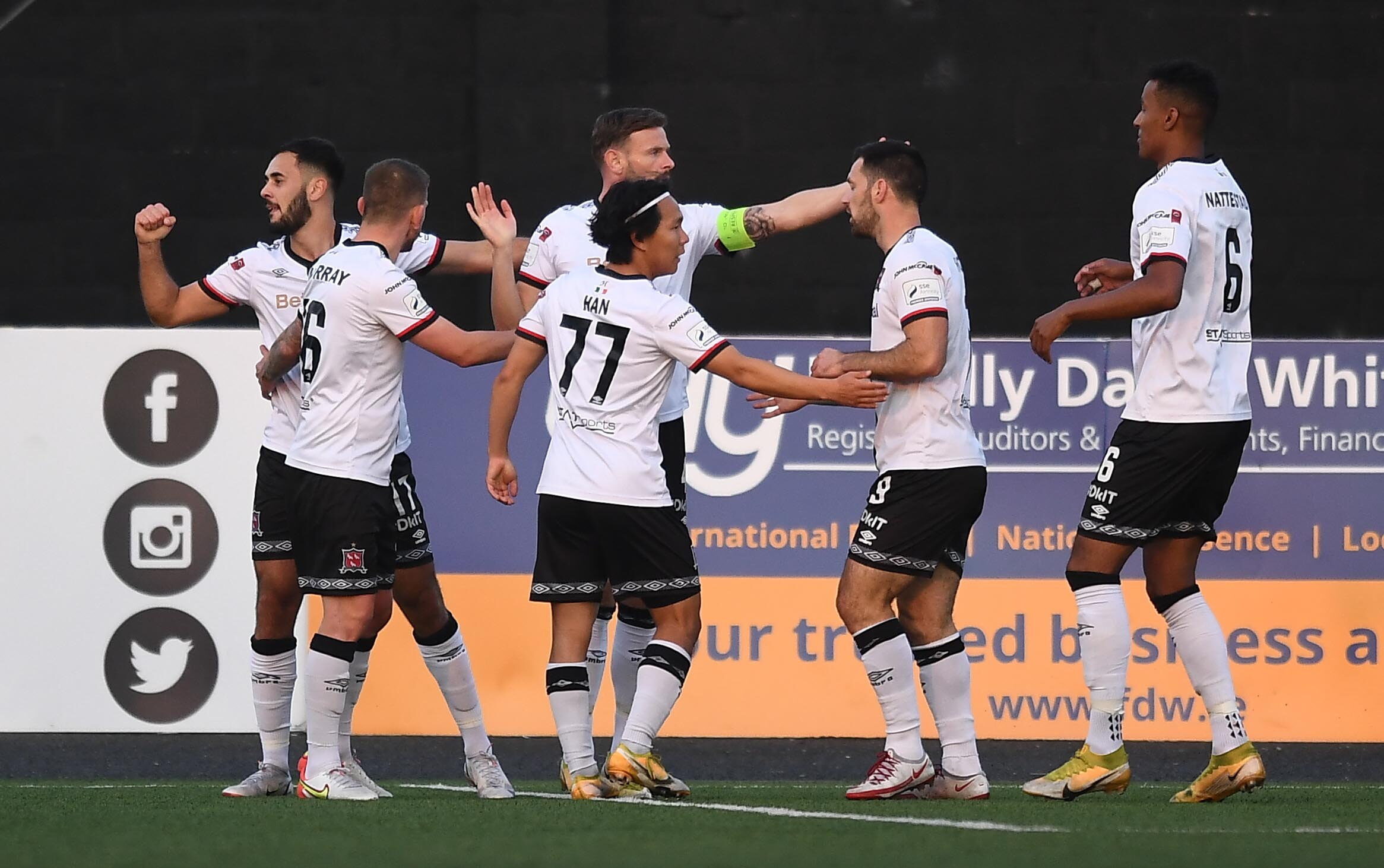 Andy Boyle headed over just after the restart as Dundalk burst out of the traps and they restored their lead when Ben Amar was brought down inside the area by Brady and Hoban made no mistake from the spot, firing past Kmet.

The Dundalk hitman made it 3-1 moments later, showing some clever footwork to dance into the box and curl a brilliant drive into the bottom left corner and he completed his hat-trick when he latched onto a superb through ball and finished past the goalkeeper.

Murray saw a 30-yard free-kick whistled past the post with Kmet beaten and substitute Greg Sloggett, who came on for the injured Zahibo in the first half, went close to adding to the total when he almost found the net from Murray’s corner.

Hoban should have had a fourth when he somehow headed over from two yards out but Han Jeongwoo made it 5-1 with a crisp finish when the ball fell kindly to him after Hoban’s shot was well saved by Adam Kmet.

Teenager Mayowa Animashun came off the bench with 15 minutes to go to make his debut for the club while Perth also gave Ryan O’Kane and Mark Hanratty some game time towards the end as Dundalk cruised into the last eight for the 11th year on the trot. 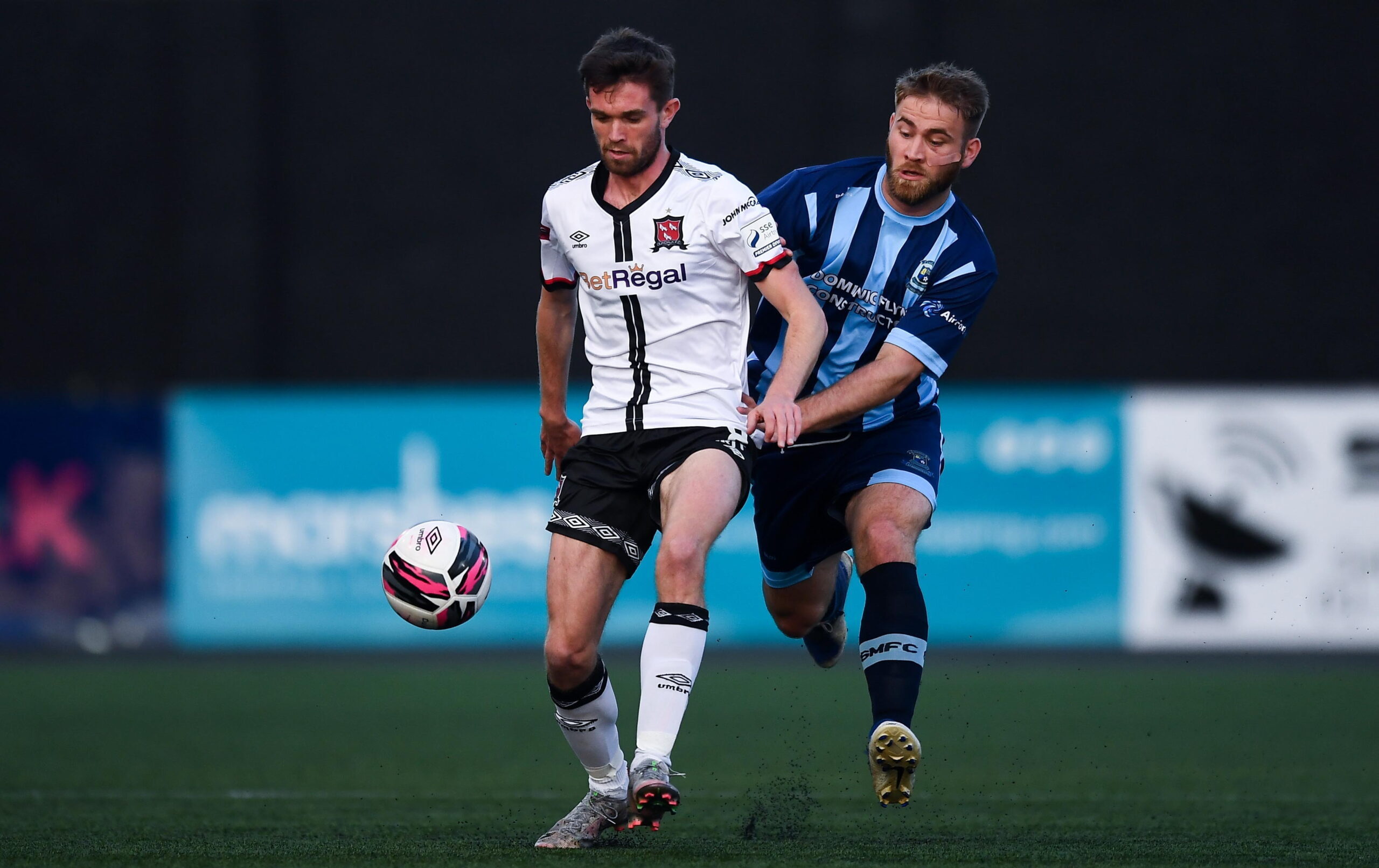 Sam Stanton in action against Gareth McCaffrey of St Mochta’s during the extra.ie FAI Cup second-round match at Oriel Park in Dundalk. Photo by Ben McShane/Sportsfile