Dundalk continued their winning start to pre-season with a 3-2 victory over Drogheda United in the annual Jim Malone Cup tie at Head In The Game Park on Saturday afternoon.

The Drogheda starting XI featured three former Dundalk players with David Odumosu, Ronan Murray, and Dane Massey all lining out against their old club. The Dundalk team saw a late change as Sonni Nattestad pulled out with a knock. He was replaced by youngster Val Adedokun, who was paired with fellow young talent Ryan O’Kane down the left-wing, both of whom would go on to have a very good afternoon.

Tim Clancy’s side enjoyed the better start as they put pressure on Dundalk right from kick-off and the first chance of the game came after five minutes when Brandon Bermingham found space on the right-hand side. He drilled the ball across goal but the Lilywhites managed to put it out for a corner, which was eventually cleared by Chris Shields.

Dundalk had a penalty appeal turned down after 12 minutes when both Junior and Sam Stanton looked to have been fouled in the box following some good combination play on the right but referee Derek Tomney decided not to point to the spot, which left some of those in black and white looking perplexed. 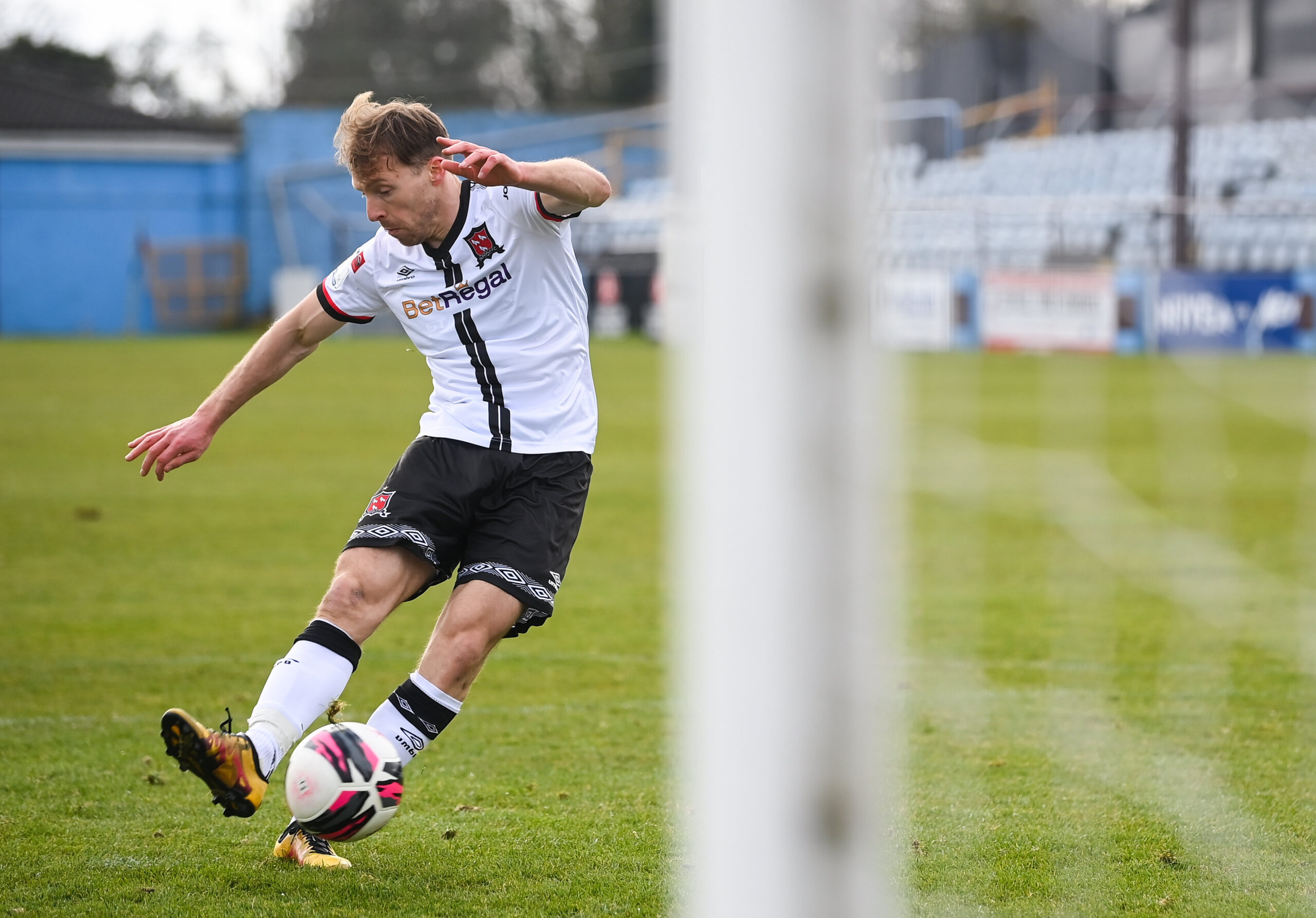 David McMillan opens the scoring from the penalty spot. Photo by Stephen McCarthy/Sportsfile

Another Dundalk opportunity came and went just three minutes later as Andy Boyle somehow missed a free header after a brilliant free-kick from Ryan O’Kane found him unmarked in the six-yard box and it was Drogheda who took the lead after 20 minutes. Bermingham found himself in space on the right after a well-worked move and his cross picked out Chris Lyons, whose flicked header nestled into the far corner past Alessio Abibi.

Drogheda’s lead, however, lasted just four minutes as some great combination play between Adedokun and O’Kane allowed the latter to take the ball into the box, where he was fouled by Luke Heeney. The resulting penalty was placed calmly into the bottom left corner by David McMillan.

Both sides had chances after that with Bermingham again causing problems with his runs down the right but Dundalk proved to be the more clinical of the two sides and they took the lead on 37 minutes. Junior carried the ball down the right on the counter before crossing to the back post for the unmarked Adedokun, who had time to shift the ball onto his right foot before placing it into the top corner to claim his first senior goal for the club. 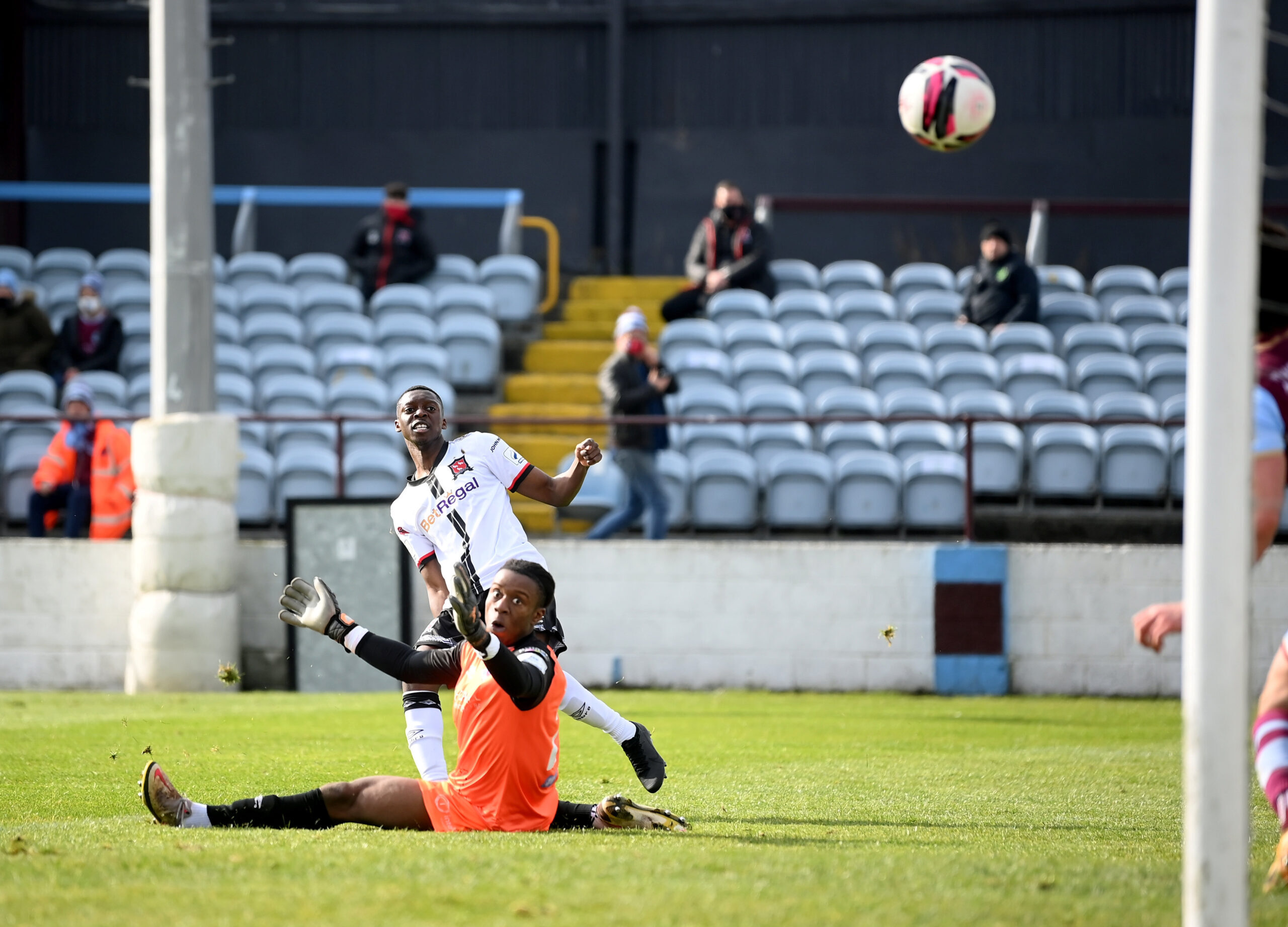 Patrick Hoban replaced McMillan at half-time to make his first appearance of 2021 while Patrick McEleney replaced O’Kane, who was very impressive once again with his general play, and the second half started at a frenetic pace as both sides produced half chances.

Drogheda drew level on 52 minutes when Ronan Murray hit a stunning free-kick from range into the top corner that left Abibi helpless but after bringing Greg Sloggett on for Sam Stanton and Jesus ‘Chino’ Perez on for Adedokun, Dundalk regained control and the lead in the 67th minute when McEleney’s excellent free-kick found Sloggett and he managed to squeeze his header past Colin McCabe.

Dundalk controlled the game more and more as the minutes ticked on and Hoban was denied twice in the latter stages as the Lilywhites saw it out to secure their sixth straight Malone Cup victory.