Jordan Gibson’s first-half strike was a deserved winning moment for Sligo Rovers as Dundalk once again disappointed in the SSE Airtricity League Premier Division at Oriel Park on Friday night, going down 1-0.

For all Dundalk’s endeavour, the home side only mustered half-chances in the opening period, where Sligo made the most of what came their way.

Walter Figueira rattled the crossbar from distance early on, and it was from a similar range that the Bit O’ Red struck the front six minutes before the break when Gibson powered past Peter Cherrie. 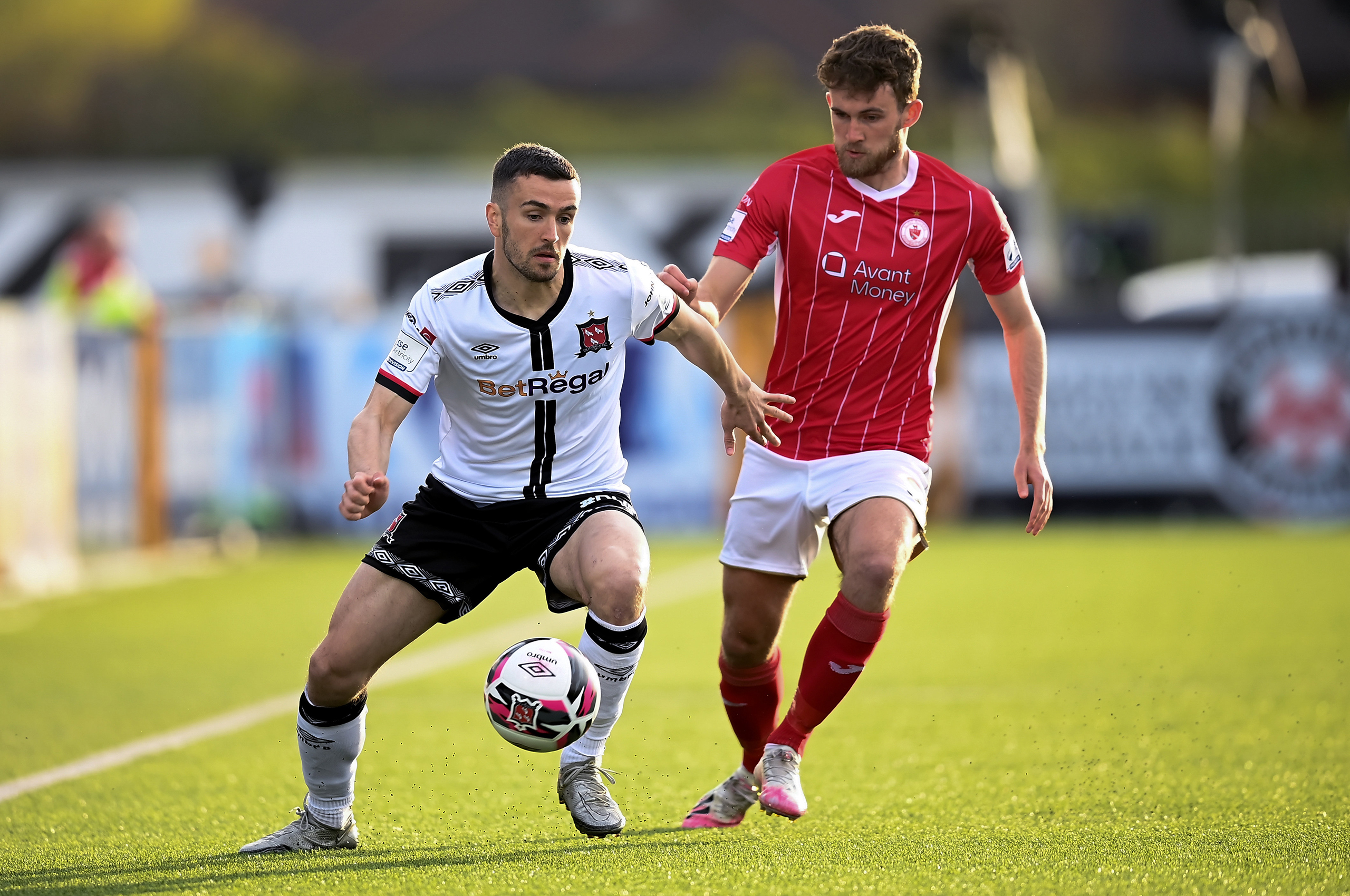 Michael Duffy of Dundalk in action against Lewis Banks of Sligo Rovers during the SSE Airtricity League Premier Division match between Dundalk and Sligo Rovers at Oriel Park. Photo by Stephen McCarthy/Sportsfile

Sligo were reduced to ten men early in the second half when Garry Buckley received his marching orders for a second high boot of the night.

However, it was an advantage that Dundalk never appeared likely to capitalise on as Sligo saw the game through – with Wilfried Zahibo denied twice by Ed McGinty in injury-time – to continue their own fine form.

Dundalk interim boss Jim Magilton made two changes to the team that drew 2-2 in Longford on Bank Holiday Monday, as Zahibo and Han Jeongwoo came in for Greg Sloggett and Patrick McEleney, with Cherrie surviving despite costly mistakes in the midlands. 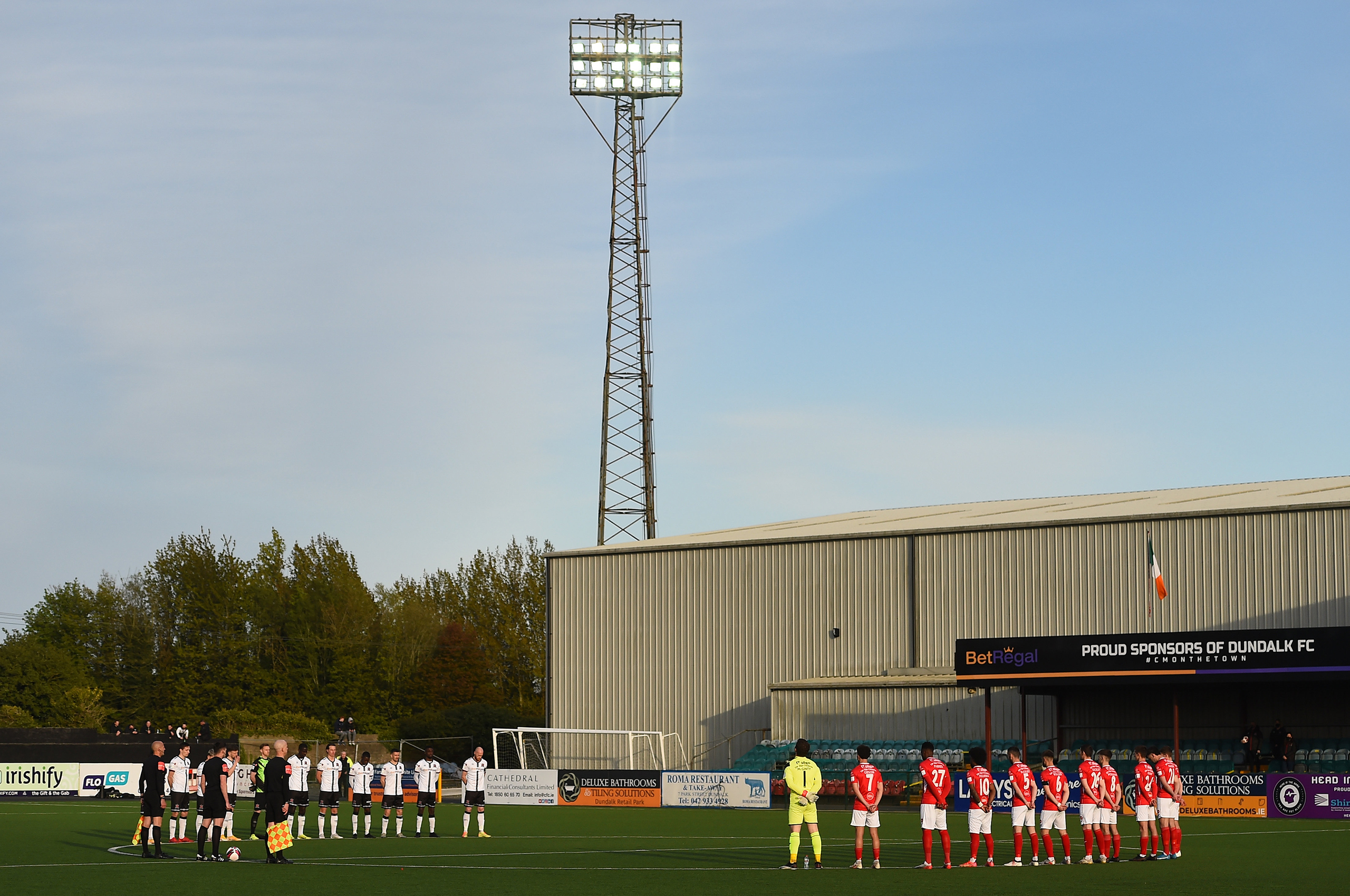 Players of both sides stand for a minutes silence for the late Alan Keely before the SSE Airtricity League Premier Division match between Dundalk and Sligo Rovers at Oriel Park. Photo by Ben McShane/Sportsfile

Prior to the game, there was a minute’s silence for Alan Keely – son of club legend Dermot, a spectator on the evening – who so sadly passed away at the age of just 38 last Monday. Alan had settled in Dundalk and was living close to Oriel Park.

On three minutes, a long ball by Cherrie was knocked on by Michael Duffy into the path of Junior who skipped past John Mahon in the box but McGinty blocked well.

While Dundalk had started brightly, Sligo almost took the lead out of nothing on 11 minutes when Gibson played the ball to Figueira who cut inside and unleashed a 25-yard strike that smashed the underside of the crossbar and bounced out.

On the quarter-hour, pressure from Seán Murray and Chris Shields won possession just inside the Sligo half and Han created an opening for Junior whose shot from the edge of the box was straight at McGinty. 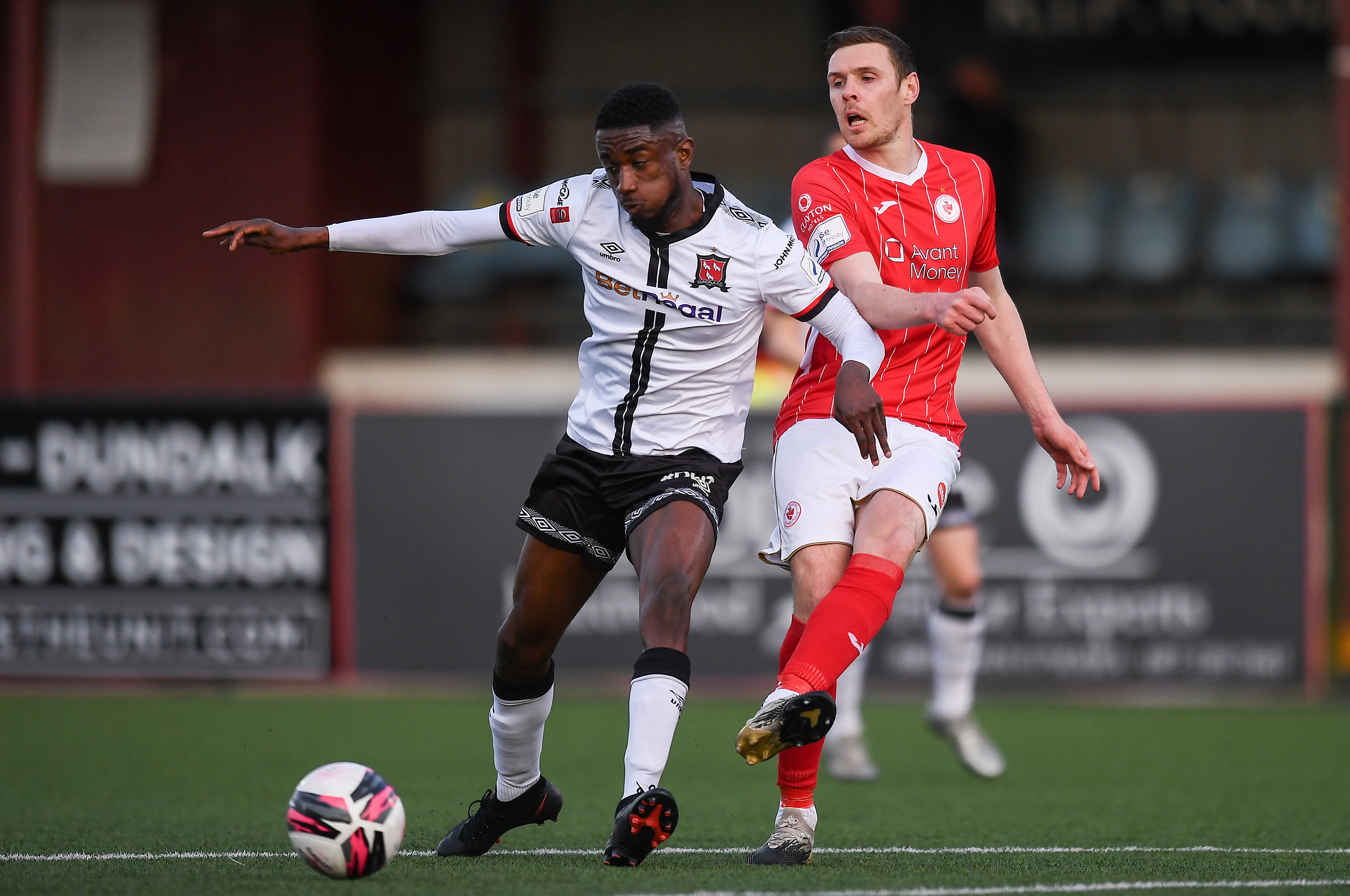 Junior Ogedi-Uzokwe of Dundalk in action against Garry Buckley of Sligo Rovers during the SSE Airtricity League Premier Division match between Dundalk and Sligo Rovers at Oriel Park. Photo by Ben McShane/Sportsfile

There was little in the way of creation or quality from either side for long periods of the opening 45, or the game as a whole. Indeed, Dundalk were almost masters of their own misfortune yet again on the half-hour. Johnny Kenny stole the ball from Val Adedokun on the halfway line and raided forward, but Cherrie denied the youngster at his near post.

Then, from nowhere, Sligo hit the front in the 39th minute when Romeo Parkes controlled well and cleverly picked out Gibson who eased around Andy Boyle before drilling low beyond Cherrie from over 25 yards out.

Dundalk were thrown a lifeline in the 53rd minute when Buckley received a second yellow card for a high challenge on Junior, having done similar on Adedokun in the first half. Sligo responded by sacrificing Parkes for Shane Blaney, while the hosts introduced Daniel Kelly for Han. 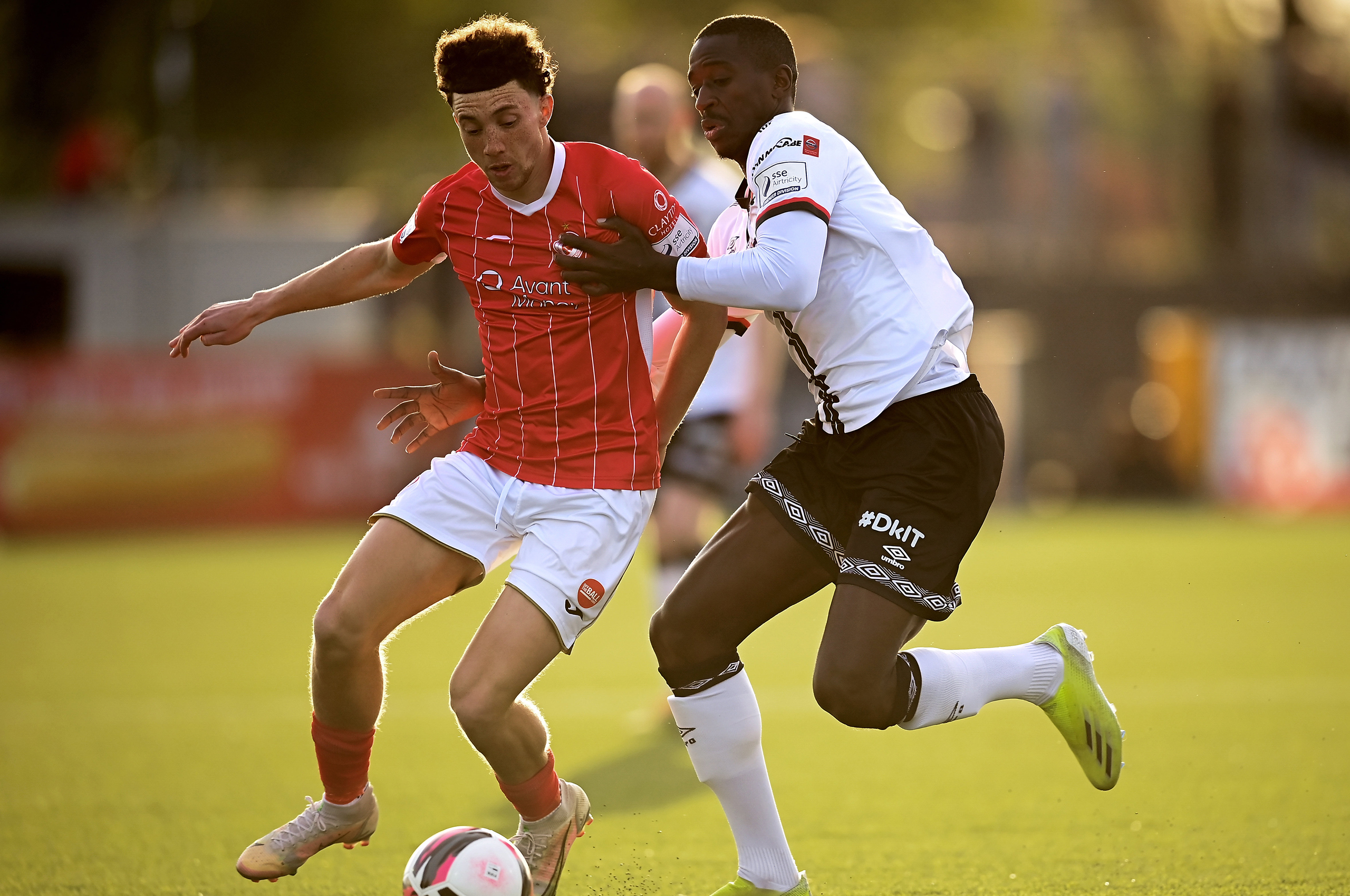 Jordan Gibson of Sligo Rovers in action against Wilfried Zahibo of Dundalk during the SSE Airtricity League Premier Division match between Dundalk and Sligo Rovers at Oriel Park. Photo by Stephen McCarthy/Sportsfile

On 62 minutes, a combination of Junior and Shields found Murray in the area and his clever feet opened up an opportunity for Kelly but the substitute blazed over from a difficult angle.

Shortly after, Murray tried his luck from distance – attempting to replicate his heroics against the westerners a couple of seasons ago – but the ball flew over the bar.

In a last throw of the dice, with ten minutes remaining, Magilton gambled on Midtskogen – wearing a mask as he nursed a broken nose – with Junior departing.

Dundalk never looked threatening for much of the match but they did stage a rally in stoppage time. Zahibo was denied twice, firstly his header from a McEleney cross saved by McGinty before the young ‘keeper pushed away the midfielder’s header from Duffy’s corner, as the Lilywhites’ five-match unbeaten run came to an end. 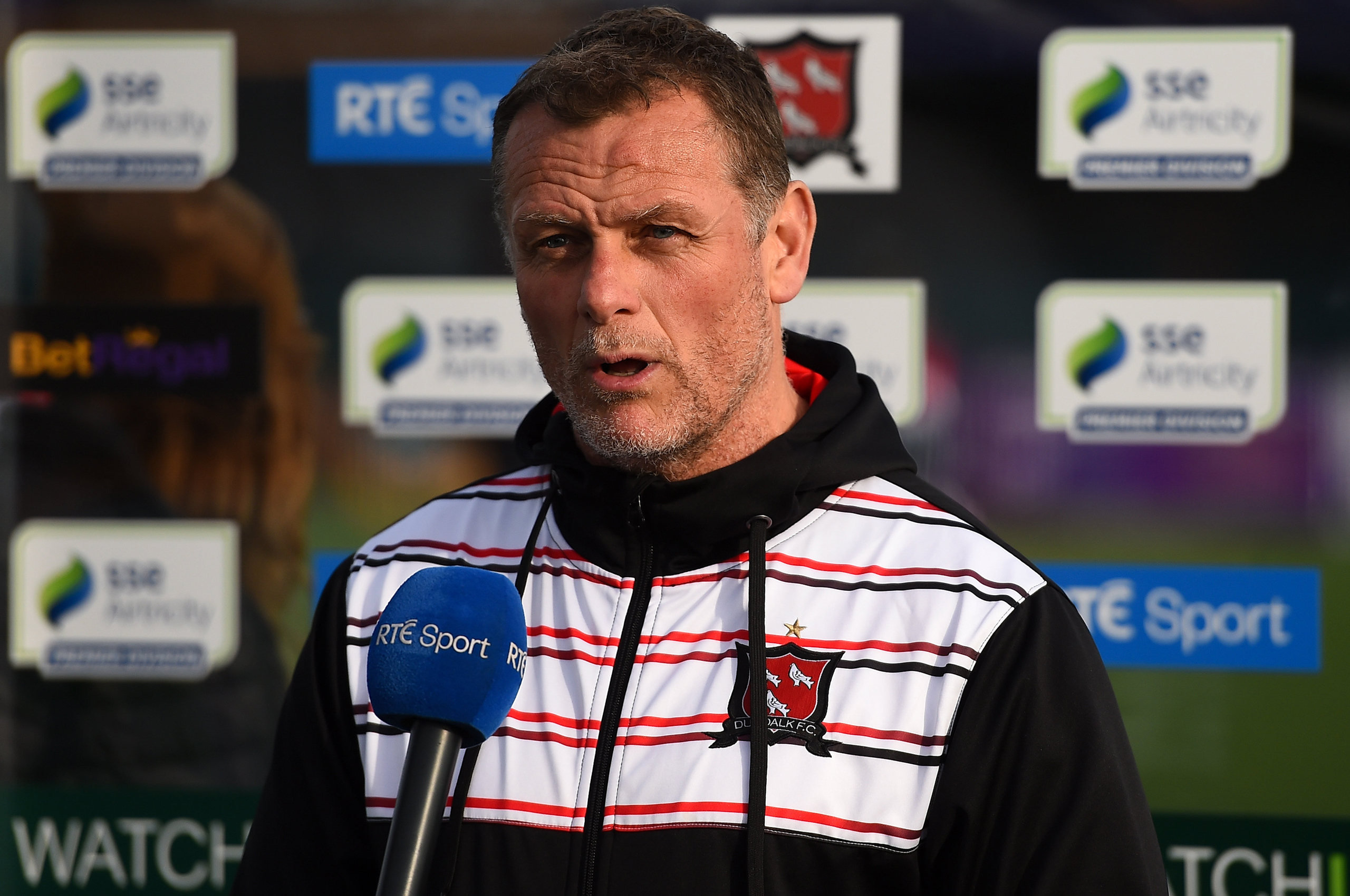 Afterwards, Magilton told RTÉ Sport: “I thought it was a really good game of football, first half. I thought technically, both teams tried to go and play. I really enjoyed it – there was good intensity in the game. They’ve had two shots, they’ve scored one. Again, I felt there was nothing really in the game.

“It happens in football. You go down to ten men, the opposition have got something to hold onto. I just didn’t think we showed enough quality in the final third. We didn’t test the goalkeeper enough. I think there were a few opportunities, but just not enough.

“It didn’t happen for us tonight and, again, you have to give credit to Sligo – they defended for their lives.

“I thought there was really good quality and I thought we had good intensity in our game, in the first half. In the second half, we just didn’t take advantage of the ten men and we didn’t do enough in the final third.”