The 23rd edition of the Jim Malone Cup takes place this Saturday when Dundalk FC take on Drogheda United at United Park.

The game will be streamed live on the Drogheda United YouTube page while LMFM will also be providing live commentary on their website and app. The action gets underway at United Park at 1pm.

Introduced in 1997 to commemorate the man who held the position of president, chairman and vice-chairman during his long association with the Lilywhites, the fixture has become an annual pre-season event.

Incredibly, the Drogs won 13 of the first 15 meetings between the sides, with 10 years separating Dundalk’s first win in March 2000 and their second in February 2010. The tables have turned in recent years, though, with the trophy having resided in the Oriel Park Dundalk’s trophy cabinet since 2015.

The 2021 season will be the first time since 2017 that both sides have been in the Premier Division, following Drogheda’s promotion last season. In the build-up to Saturday’s fixture, we take a quick look back at some notable meetings over the past decade. 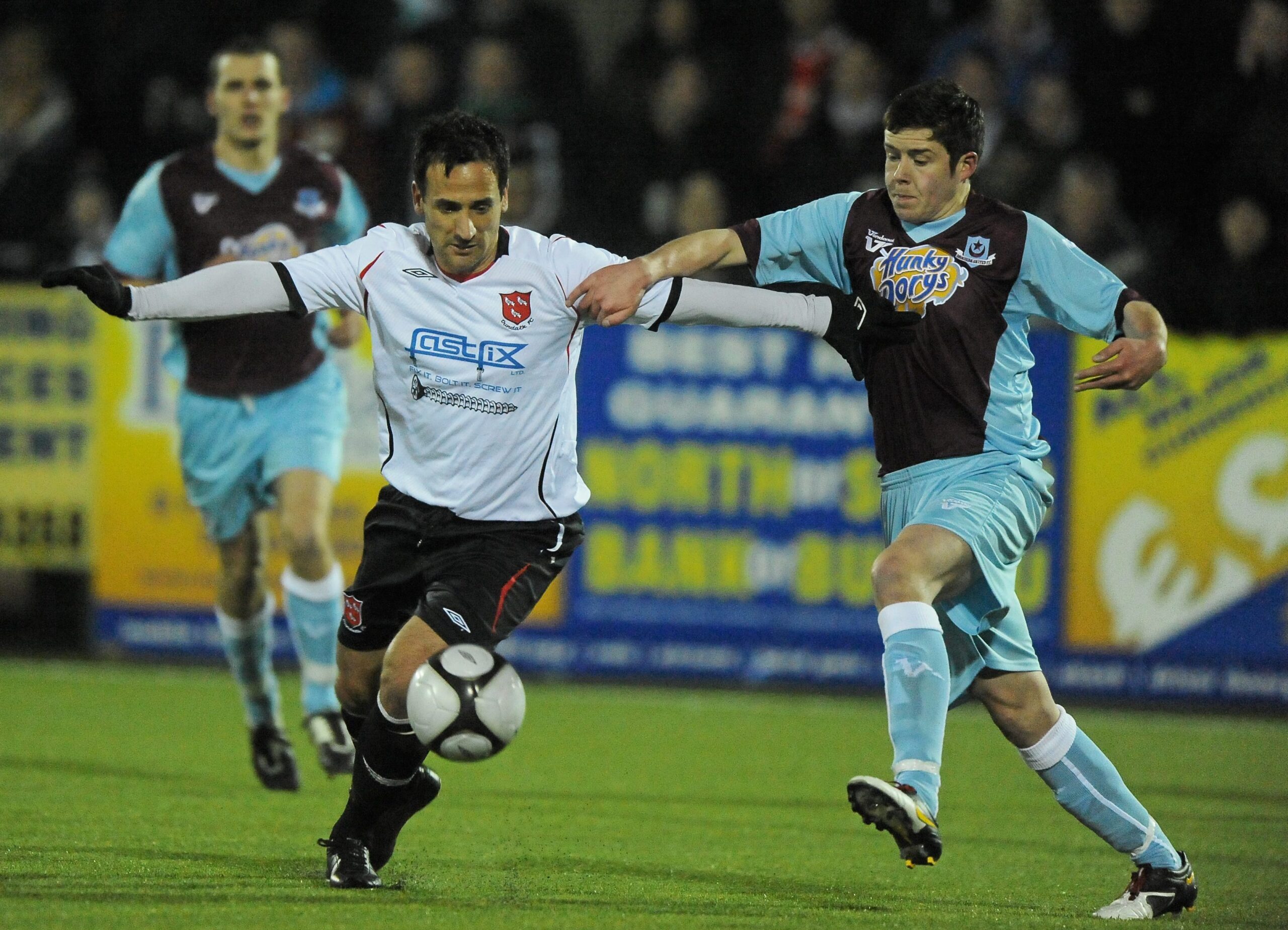 After 10 years of Drogheda domination, the Jim Malone Cup made its way back to Dundalk for the first time since 2000 as Ian Foster’s new-look side recorded a 2-1 win.

A disjointed game was settled by trialist John Flood who endeared himself to the Lilywhites faithful by grabbing both goals, either side of a Paul Crowley header. Despite that brace, the former Bray striker wasn’t offered a contract and he started the 2010 season with the Drogs!

There was no fixture the following year, as Drogheda found themselves in dire financial straits after finishing bottom of the Premier Division in 2010. They were spared relegation following Sporting Fingal’s extinction, but the Malone Cup game was put on ice for 12 months due to the Drogs not having enough time to assemble a competitive team.

Chris Shields and John Mountney both started while Brazilian Hernany Macedo made a rare appearance for Sean McCaffrey’s side while the Drogs squad included some familiar names such as Gabriel Sava, Shane Grimes, Tiarnan Mulvenna and Johnny Breen. 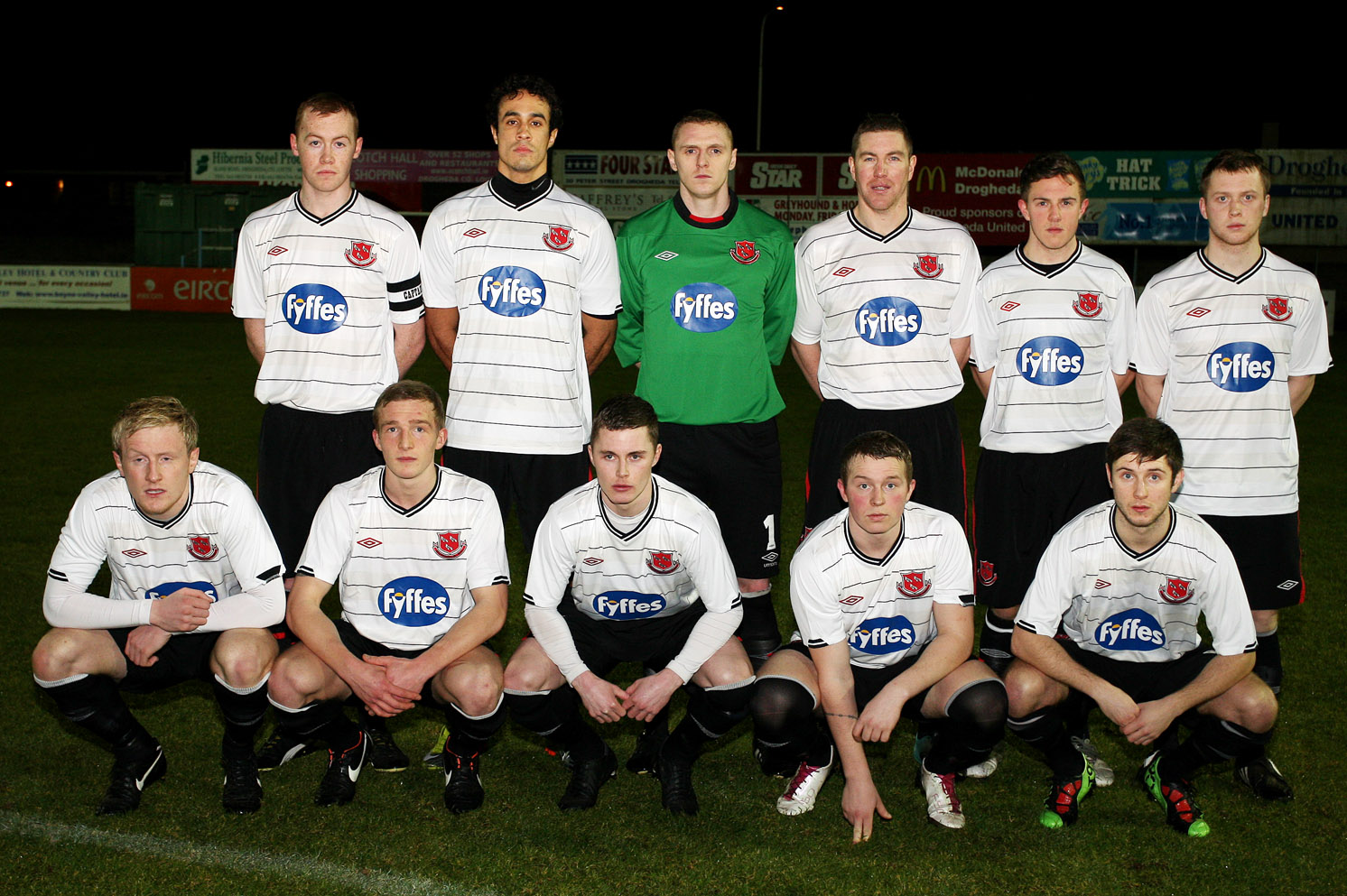 The first Malone Cup of the Stephen Kenny-era ended in defeat for Dundalk as the Drogs, who finished the 2012 league campaign as runners-up to Sligo Rovers, won a penalty shootout in sudden death when Gabriel Sava turned Mark Rossiter’s effort away.

New boy Richie Towell came off the bench in the 16th minute while there were also starts for Rob Maloney and Eoghan Osborne as Kenny went about shaping a squad that would go on to dominate the league.

Just three weeks before they met in the opening league fixture of the 2014 season – that infamous 4-1 defeat! – the Malone Cup was settled by a penalty shootout for the eighth time. Gavin Brennan gave the hosts the lead before Patrick Hoban popped up with an injury-time header to send the game to penalties. In the shootout, new recruit Daryl Horgan was denied by Michael Schlingermann as the Drogs won the trophy for the 13th time in 15 games.

This was the eighth time Dundalk had lost the Malone Cup on penalties, and the second successive year the Lilywhites had lost in this fashion. However, this would turn out to be the last time in recent years that Dundalk would lose the fixture. 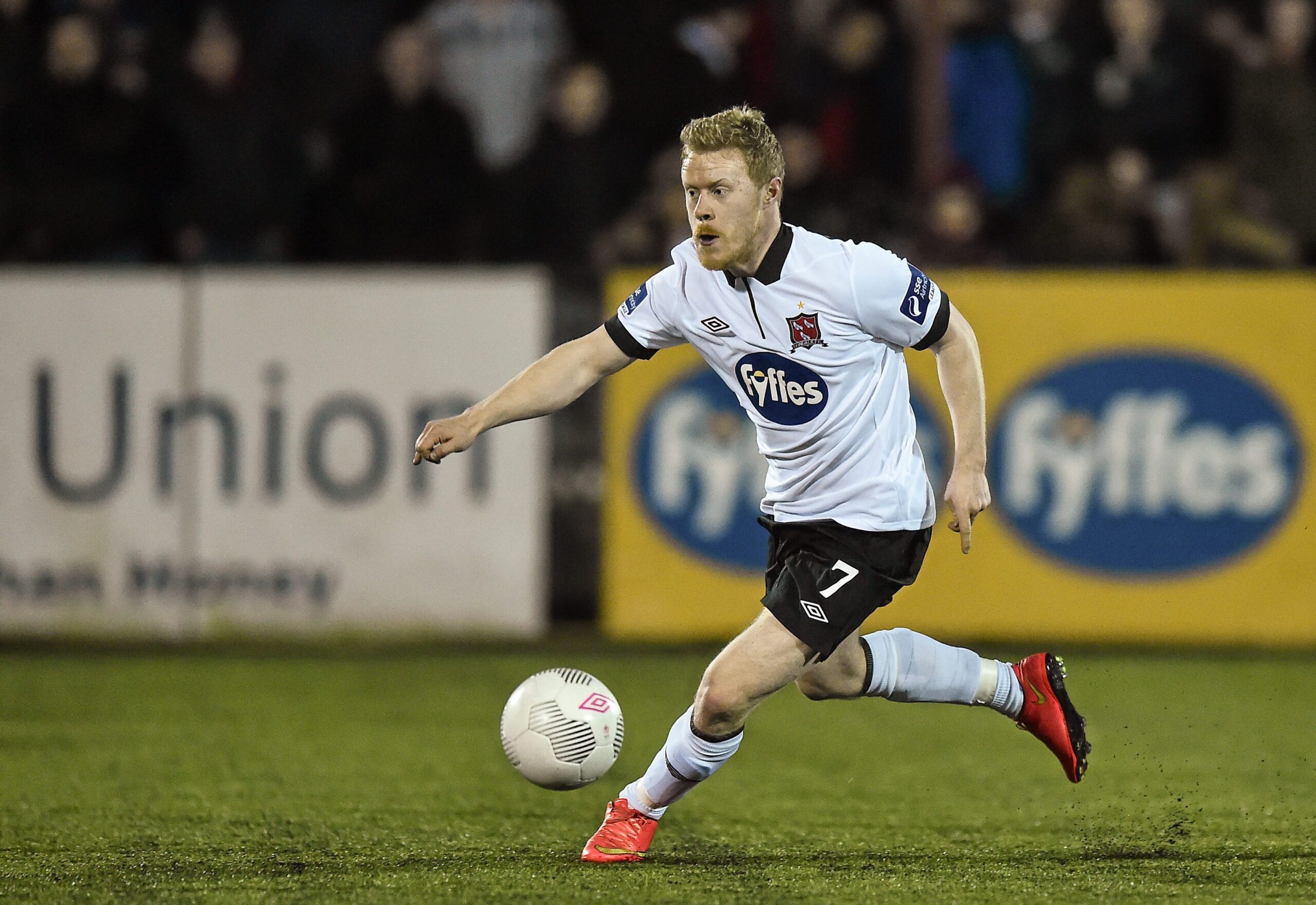 Daryl Horgan on the ball for Dundalk in the 2015 Malone Cup at Oriel Park. Photo: David Maher / SPORTSFILE

New signings Jake Kelly and Ronan Finn both featured at Oriel Park as Dundalk, who went on to win the league and FAI Cup double, won the Malone Cup for the first time in five years.

Andy Boyle headed home a Darren Meenan corner to make the breakthrough before Daryl Horgan came off the bench and set up the second for another substitute, Ciaran O’Connor. The Lilywhites would retain the trophy the following year for the first time in their history.

Dundalk retained the Jim Malone Cup for the first time in their history with a 2-0 win over neighbours Drogheda United. Ciaran Kilduff, who went on to score a couple of pretty important goals in Europe that season, was the hero as he struck a goal in either half to secure the win at United Park.

With a pre-season trip to Spain, where they faced Espanyol’s B team, on the itinerary, Dundalk put the Malone Cup on ice for a year in 2017. Lilywhites boss Stephen Kenny offered to play the game early in the season but he was met by an angry response from Drogheda manager Pete Mahon who accused the Lilywhites ‘of a lack of respect’. Unimpressed, Kenny simply labelled Mahon’s claims as ‘totally untrue’. 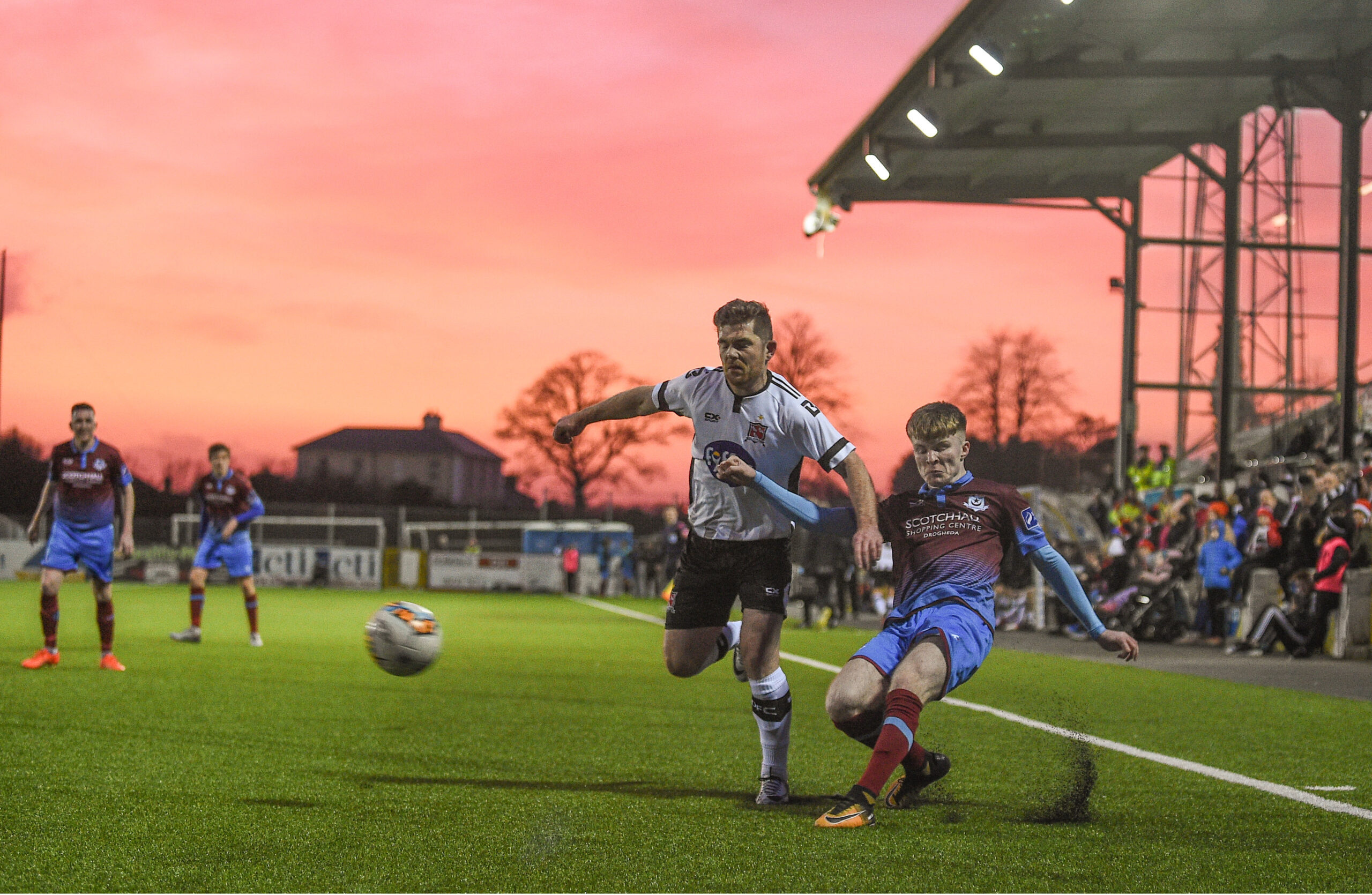 Dundalk’s Ronan Murray in action against Drogheda during the 2018 Malone Cup at Oriel Park. Photo by Sam Barnes/Sportsfile

Both sides have always had contrasting fortunes when this fixture rolls around, and that was particularly evident in 2018, as Drogheda began life in the first division for the second time in three years. Meanwhile, Dundalk had their sights set on regaining the Premier Division title which was lost to Cork City the previous year.

A host of new faces featured as Dundalk ran out 3-1 winners at Oriel Park. Lee Duffy gave Drogheda the lead in the first half but Stephen Folan – a winter recruit from Galway United – equalised and late efforts from Michael Duffy and Dylan Connolly sealed the victory and a third consecutive Malone Cup win.

This would prove to be the last Louth Derby under the management of Stephen Kenny, as he departed to take over as Ireland U21 head coach at the end of the season.

This meeting between the sides is notable as it was one of the last home fixtures that fans had the opportunity to attend before the outbreak of Covid-19 in Ireland.

Dundalk emerged 2-0 winners at Oriel Park through second-half goals from Jordan Flores and Georgie Kelly. The home side were on top for large periods of the first half, but the deadlock wasn’t broken until three minutes into the second as Daniel Kelly’s cross found Flores who headed home.

The game was then put to bed 10 minutes from the end as Kelly made another clever run down the right before cutting the ball back for Kelly to tap the ball into what was virtually an empty net to keep the Jim Malone Cup at Oriel Park for a sixth straight year.