Introduced in 2014, the annual curtain-raiser sees the reigning league champions take on the FAI Cup holders, and although it is technically viewed as a non-competitive game, Keegan is expecting an intense battle when the sides clash for the first time since they ended the Hoops’ double hopes with an epic 4-2 victory at the Aviva Stadium in December.

“In terms of getting ready for the league opener against Sligo, a game of this standard, that has a real competitive edge to it, is ideal,” Keegan told Black and White Town, the Dundalk FC Patreon members podcast. “We’ve had two tough games in our friendlies so far and it will go up another notch in Tallaght.

“There’s silverware on offer and it’s a game between two teams that have gone head to head over the past couple of seasons so there will be that natural bit of bite to it.

“All of the other league clubs would love to be involved in this game,” he added. “It gives the teams that play in it a bit of an advantage in terms of preparation for their first game the following week.

“It might not be a league game but, realistically, it will be played at a full game tempo which is match-for-match for what we will encounter in Sligo the following week.”

Both clubs have had to contend with changes over the winter. After prizing Sean Gannon and Sean Hoare away from Oriel Park, Rovers also pounced for Bohemians’ Danny Mandroiu, but they subsequently lost two key midfielders in Jack Byrne and Aaron McEneff.

“We’ve seen a couple of their pre-season games and the biggest thing to note is that there hasn’t been a change in Rovers’ style of play,” said Keegan. 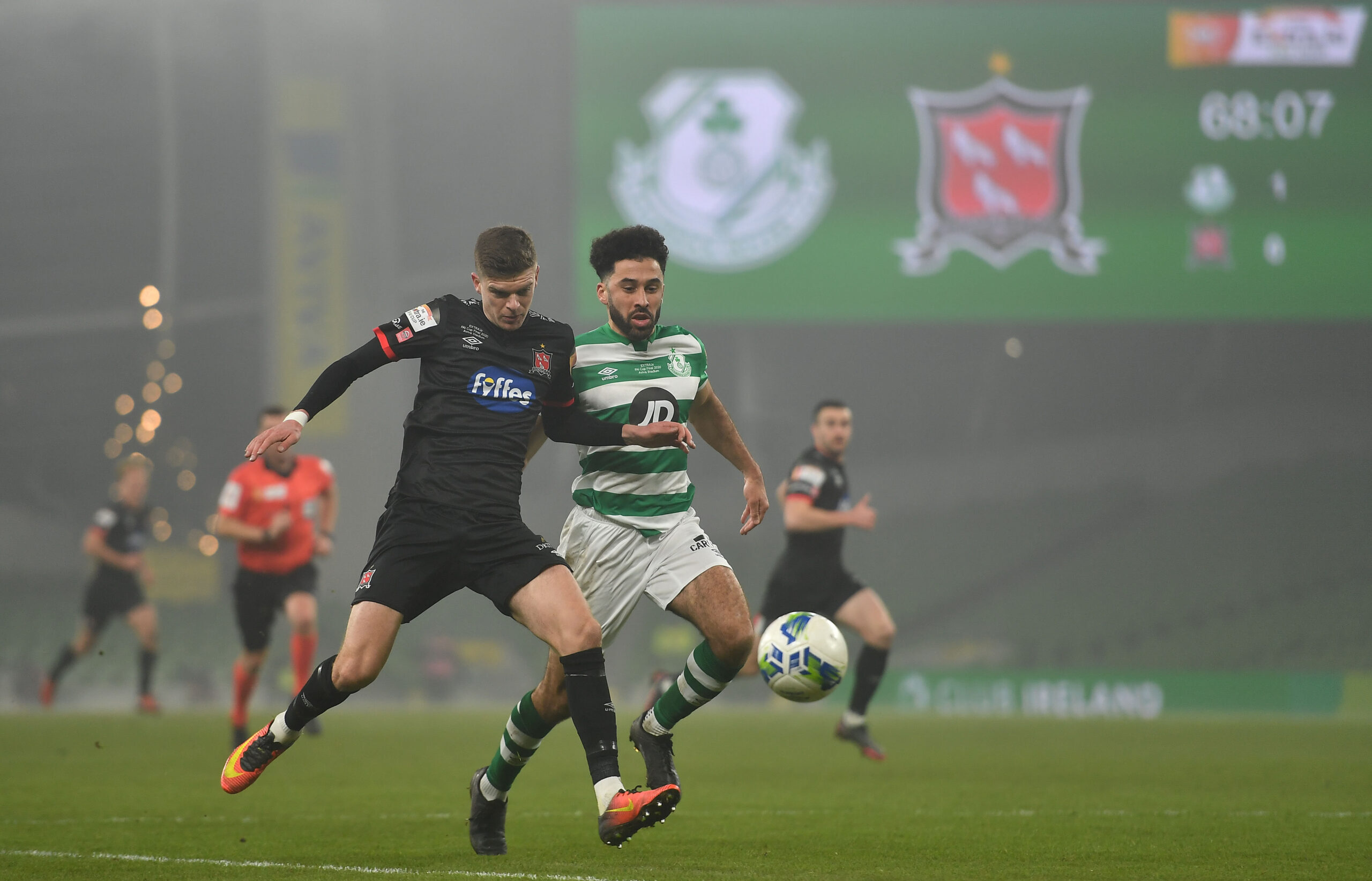 Sean Gannon tackles Roberto Lopes of Shamrock Rovers during the FAI Cup final at the Aviva Stadium in December 2020. A month later, the full-back signed for Rovers. Photo by Eóin Noonan/Sportsfile

“They’ve been clever with the players they’ve signed and they had a very definitive style of play that worked very well for them so why would they vary away from that?

“Chris McCann has also come into their midfield and Rory Gaffney is like a new signing because they didn’t get much out of him last season so yes, the two players they’ve lost were big players, but they have done really well in filling and, arguably, even strengthening the gaps.”

The Dundalk squad trained at Clancy Park on Wednesday and Thursday, and after eight weeks of pre-season training, Keegan said that the players were chomping at the bit to get the ‘real thing’ underway.

“The players were like children at Christmas when they got out on the grass,” he smiled. “Massive kudos must go to Quay Celtic for working with us. The rain came out at the same time so it made our preparations and rehearsals more realistic.

“We’re licking our lips and all looking forward to it now,” he added. “It’s brilliant to have football back. The players and coaching staff are no different from anyone else. Everybody is dying of boredom and looking for something to do so the league coming back is a huge boost to everyone.”

After missing the Malone Cup win over Drogheda United last week, Sonni Nattestad and Cameron Dummigan are pushing to be involved in Tallaght but the game has come too soon for Michael Duffy and Ole Erik Midstkogen while Sean Murray, Brian Gartland, and Daniel Kelly are also still a couple of weeks away from full fitness.

Friday night’s game will be streamed live, free of charge, on WATCHLOI. Kick-off is at 7.45pm