Dundalk left The Showgrounds with a point on Saturday evening as an impressive Sligo Rovers outfit held the Lilywhites to a 1-1 draw in their opening fixture of the 2021 SSE Airtricity League season.

Romeo Parkes canceled out Patrick McEleney’s cool finish and although both teams hit the woodwork through Jordan Gibson and Patrick Hoban respectively, the points were shared with Alessio Abibi making a couple of fine late stops to deny the home side all three.

The Lilywhites made three changes to the team that won the President’s Cup in Tallaght a week earlier with Greg Sloggett, Cameron Dummigan and Patrick Hoban coming in for Sam Stanton, Darragh Leahy and David McMillan respectively. Michael Duffy was fit enough to take his place on the bench.

The first half got off to a tetchy start with both sides giving away possession cheaply but Dundalk made the breakthrough in the 16th minute when some great pressing from Greg Sloggett saw him dispossess Greg Bolger on the edge of the Sligo box. The ball ended up at the feet of Patrick McEleney, who shifted it onto his right foot and placed it into the top right corner of Ed McGinty’s net. 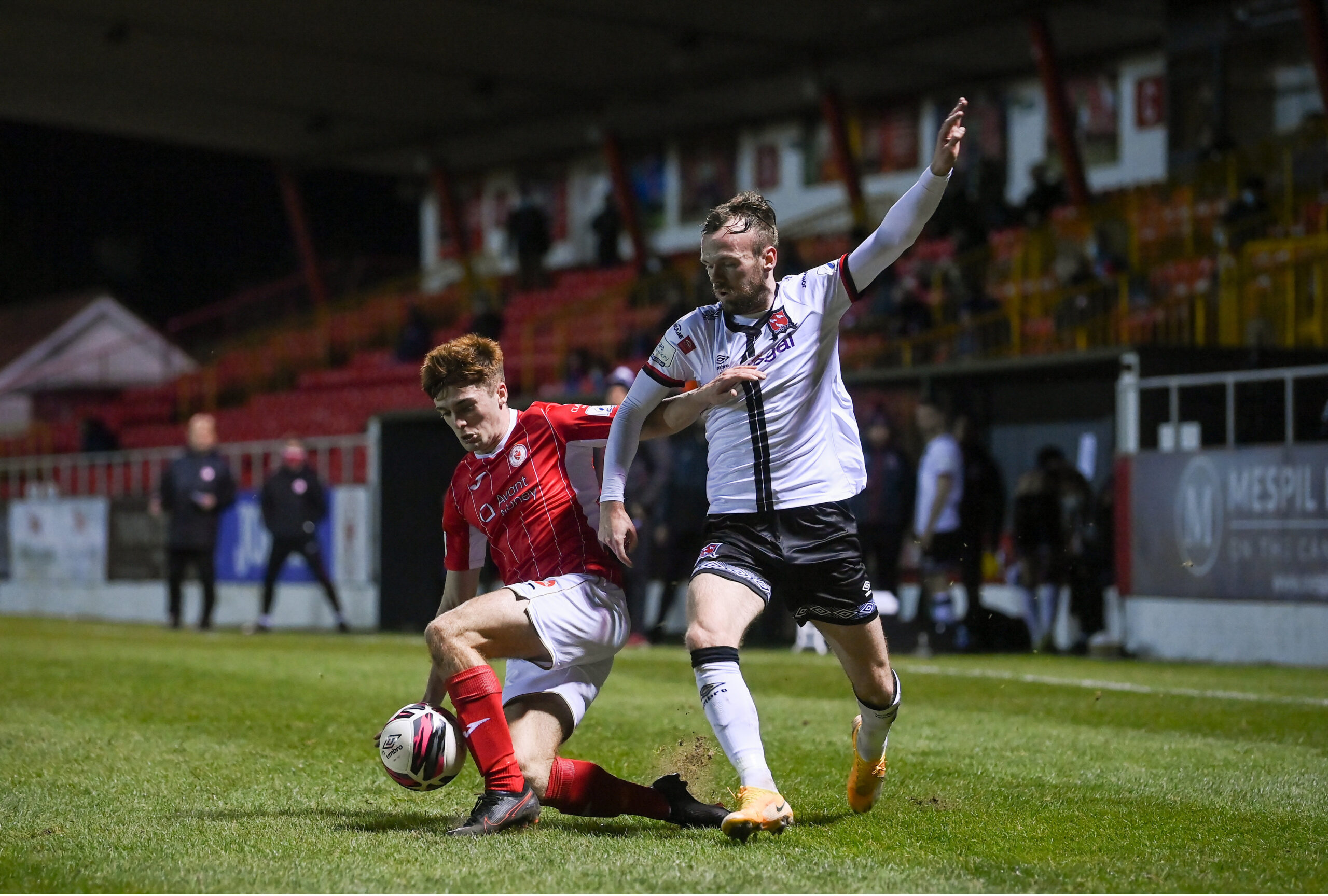 Niall Morahan of Sligo Rovers in action against Cameron Dummigan of Dundalk. Photo by Stephen McCarthy/Sportsfile

However, it was far from plain sailing for the Lilywhites after that as Sligo continued to put pressure on the Dundalk backline. They produced chances of their own, with 17-year-old striker Johnny Kenny shooting narrowly wide after controlling a long ball forward. Liam Buckley’s men were rewarded for their pressure just a minute after Kenny’s chance, as a good free-kick from Robbie McCourt found the head of Romeo Parkes and he nodded past Abibi.

Sligo kept possession well in the remainder of the first half and Jordan Gibson hit the post after being played through by Romeo Parkes. Dundalk had a chance of their own just before half-time when a ball down the right-wing was chased by Junior. Sligo goalkeeper Ed McGinty left his box to clear it but completely missed the ball, allowing Junior to cut the ball back to Hoban, who dragged it wide.

The second half started in a similar vein to the first, with Dundalk struggling to maintain quality possession under pressure from Sligo. The Lilywhites did manage to create chances, though, with Cameron Dummigan blazing the ball over the bar after good set up play by Hoban. Greg Sloggett then saw a 20-yard effort creep just wide before Hoban headed an inch-perfect Daniel Cleary cross against the post. 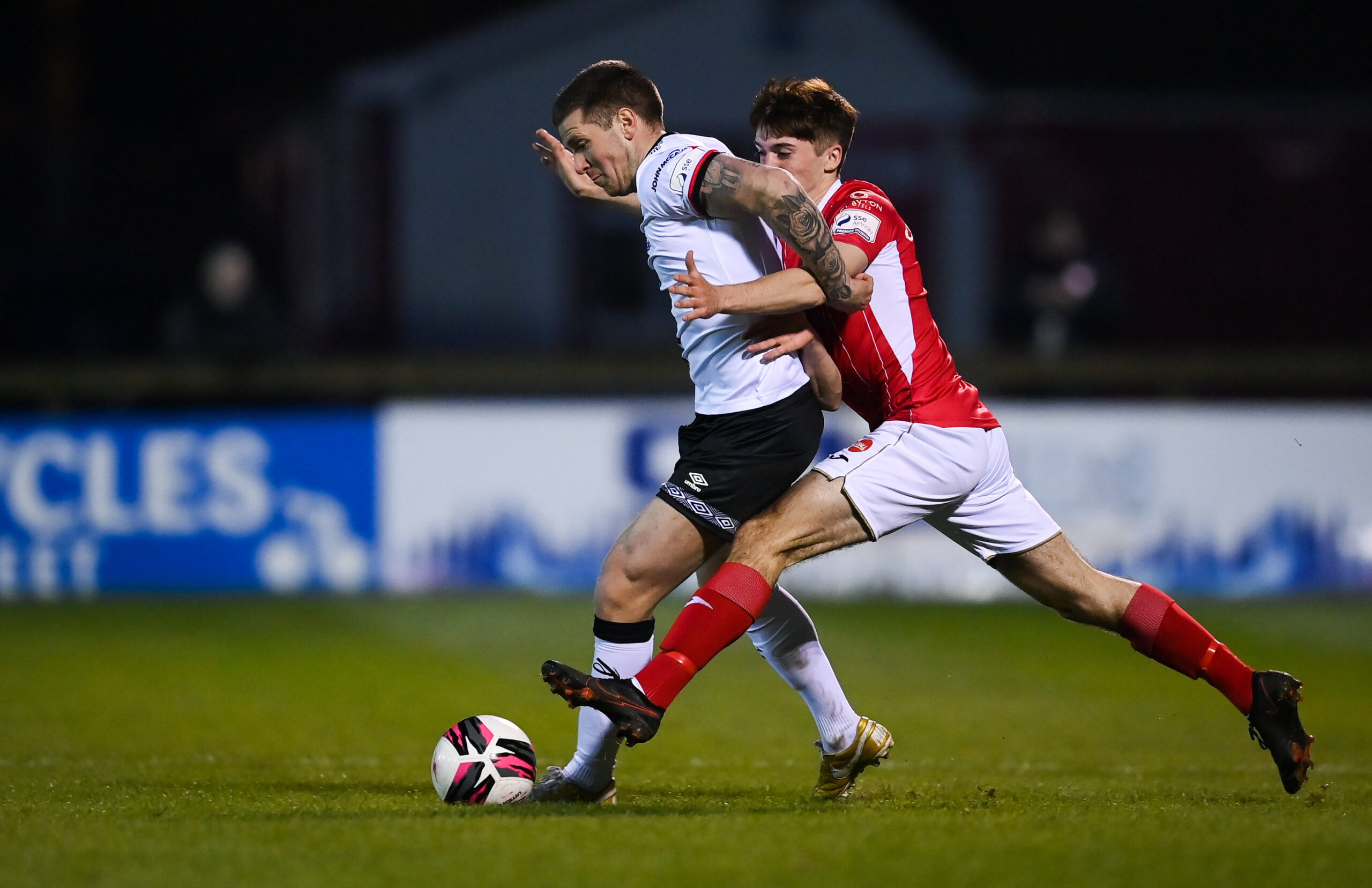 Sligo then took control of the game and maintained it for almost the entire second half, earning a number of corners, six in total throughout the game. Kenny was given another great chance to score a second for his side in the 86th minute when he went through one-on-one with Abibi but the Albanian goalkeeper produced a fine save to deny him.

Then, just two minutes later, Sligo players and staff thought they had the game won when substitute Mark Byrne tucked the ball away on the rebound after a long-range strike from Kenny was palmed into his path by Abibi, but the goal was ruled out for offside. Both sides pushed for a winner in stoppage time, but neither managed to snatch the three points as the spoils were shared on opening night.