Dundalk left Tallaght Stadium empty-handed on Friday night as they suffered a 2-1 defeat to Shamrock Rovers.

Danny Mandroiu and Dylan Watts put the Hoops 2-0 in front before Patrick Hoban pulled one back late on but it wasn’t enough and after three matches the Lilywhites are still searching for their first league win in 2021.

All eyes were on teenager Ryan O’Kane who was handed his first start for his hometown club but the night got off to a bad start when Brian Gartland, who also came in for his first appearance of the campaign, was stretchered off after hitting the turf with a serious-looking knee injury inside the first minute. After a lengthy stoppage, he was replaced by Greg Sloggett who lined up alongside Andy Boyle and Daniel Cleary in a three-man defence.

Rovers took the initiative after that and Chris McCann was the first to have an effort that was tipped over by Alessio Abibi while at the other end Hoban looked destined to make the breakthrough when he got on the end of Michael Duffy’s superb cross but Liam Scales did brilliantly to deflect the ball wide. 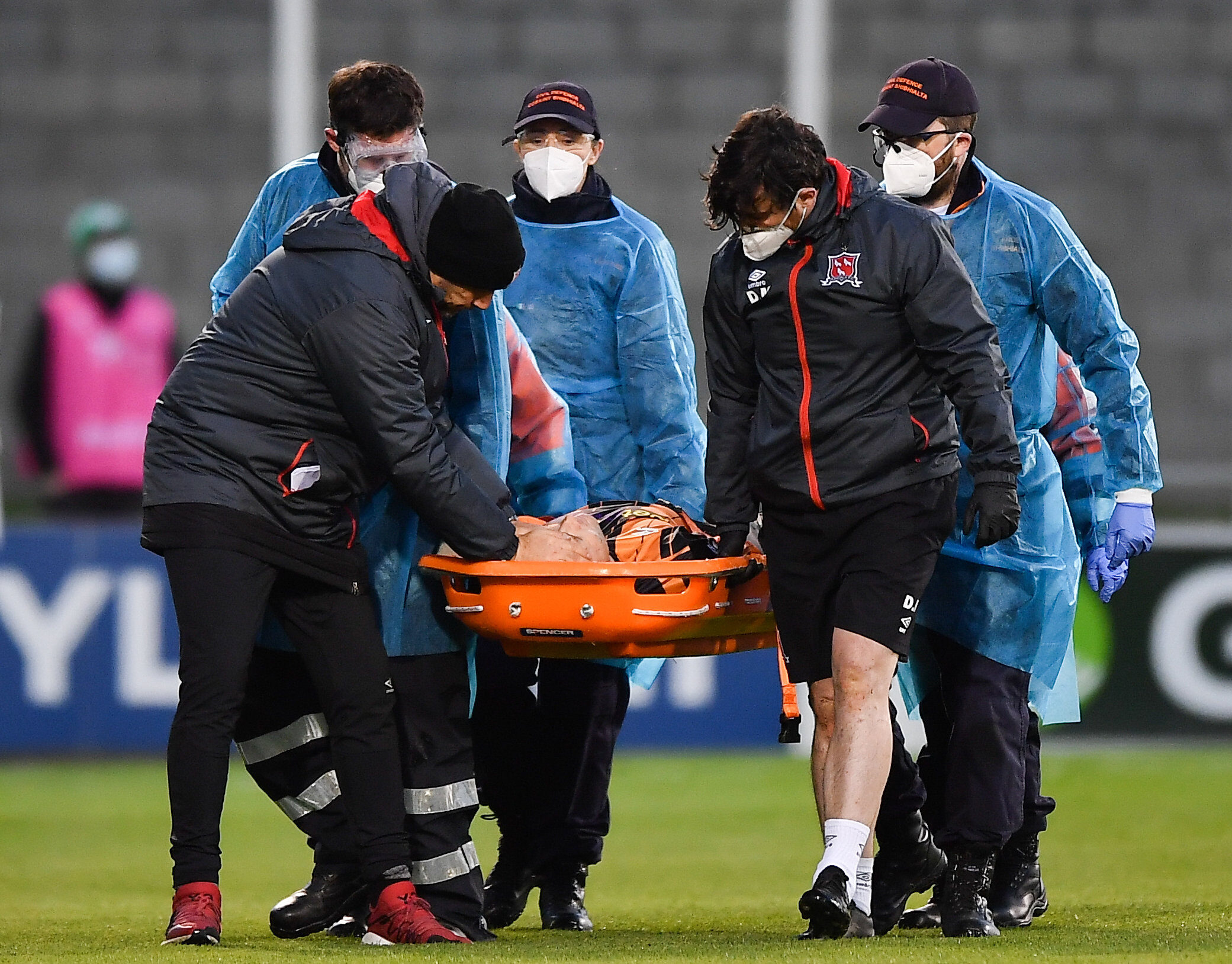 Dundalk coach Filippo Giovagnoli checks on Brian Gartland as he is stretchered from the pitch during the SSE Airtricity League Premier Division match with Shamrock Rovers at Tallaght Stadium. Photo by Seb Daly/Sportsfile

Sloggett headed a Sam Stanton corner into the arms of Mannus before Abibi was forced into action once again when he had his palms stung by an Aaron Greene effort; the Albanian netminder getting his body behind it to push it to safety.

Rovers continued to boss the possession without creating too much from open play. Graham Burke shot over the bar when he got on the end of Sean Kavanagh’s neat cross and Burke himself was the creator after that when his free-kick from close to the halfway line found the head of former Lilywhite Sean Hoare but his effort looped up and over the bar.

Greene got in behind Jurvkovskis and had a chance to shoot himself but he delayed and waited for Danny Mandroiu to arrive at the back post and the chance went dead. Rovers, however, did take the lead shortly after that when Burke laid the ball into the path of Mandroiu and he unleashed a stunning shot from 25 yards that nestled in the corner.

Dundalk went in one goal down at the break but they upped the tempo in the second half and half-time substitute Ole Erik Midtskogen, who came on for O’Kane, almost made an instant impact when he cut in off the right but his effort went straight at Mannus. 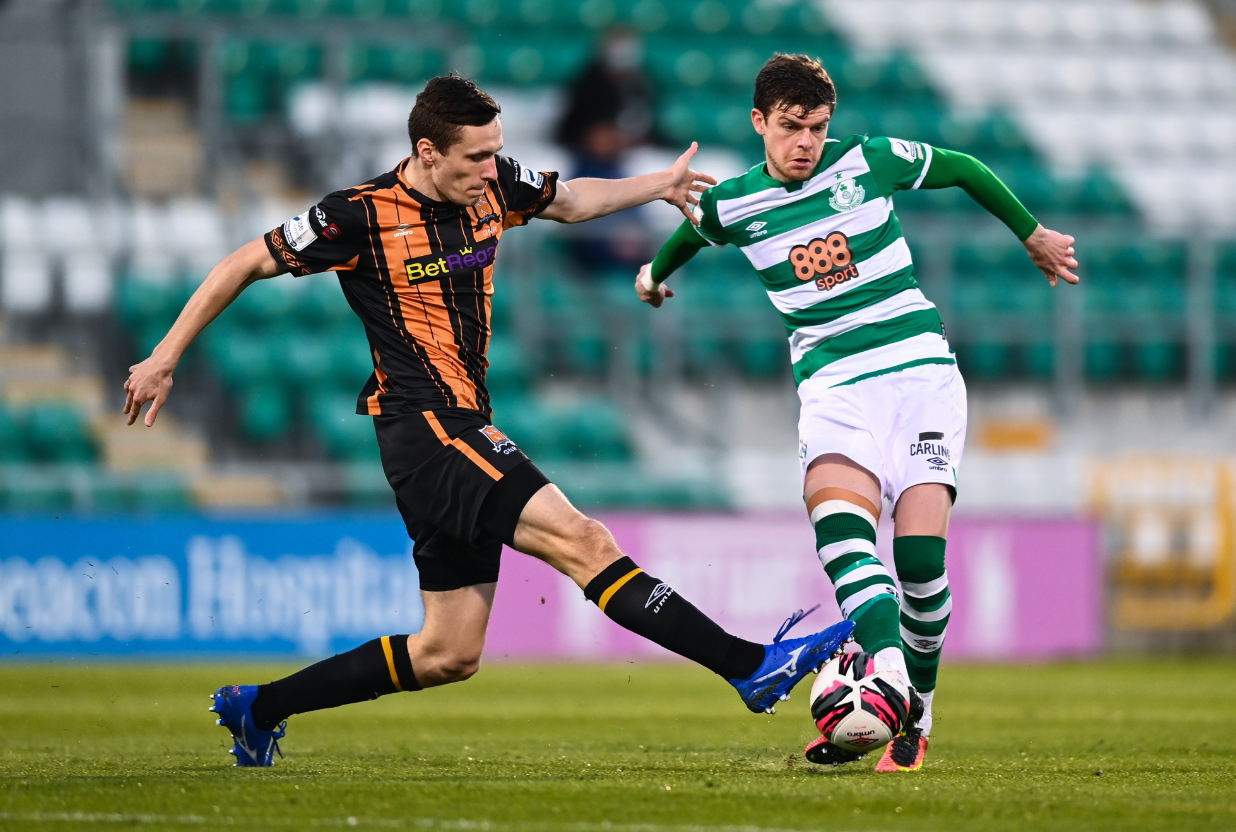 It looked like Rovers had doubled their lead shortly after that but Aaron Greene’s tap-in was ruled offside after Burke played him in and Dundalk responded to the let-off when Duffy forced an excellent save from Mannus; the winger’s effort blocked by the goalkeeper’s chest.

Duffy looked the likeliest to find the net and Dundalk almost restored parity when he collected a lovely pass from Cameron Dummigan only to see his stunning drive came back off the crossbar with Mannus beaten.  Things started to open up and former Lilywhites full-back Sean Gannon saw a stinging drive from distance go inches past the post with Abibi beaten.

The outcome was determined in the space of the next five minutes as Duffy forced another superb save from Mannus before Sam Stanton flashed one just inches wide. With their next attack, however, Rovers doubled their advantage when substitute Dylan Watts let fly from distance and beat Abibi.

The Lilywhites mounted a late response and Hoban got the goal Dundalk deserved when he got on the end of a Chris Shields cross to glance a header past Mannus. This came just moments after the number nine guided another header against the post from Andy Boyle’s centre. 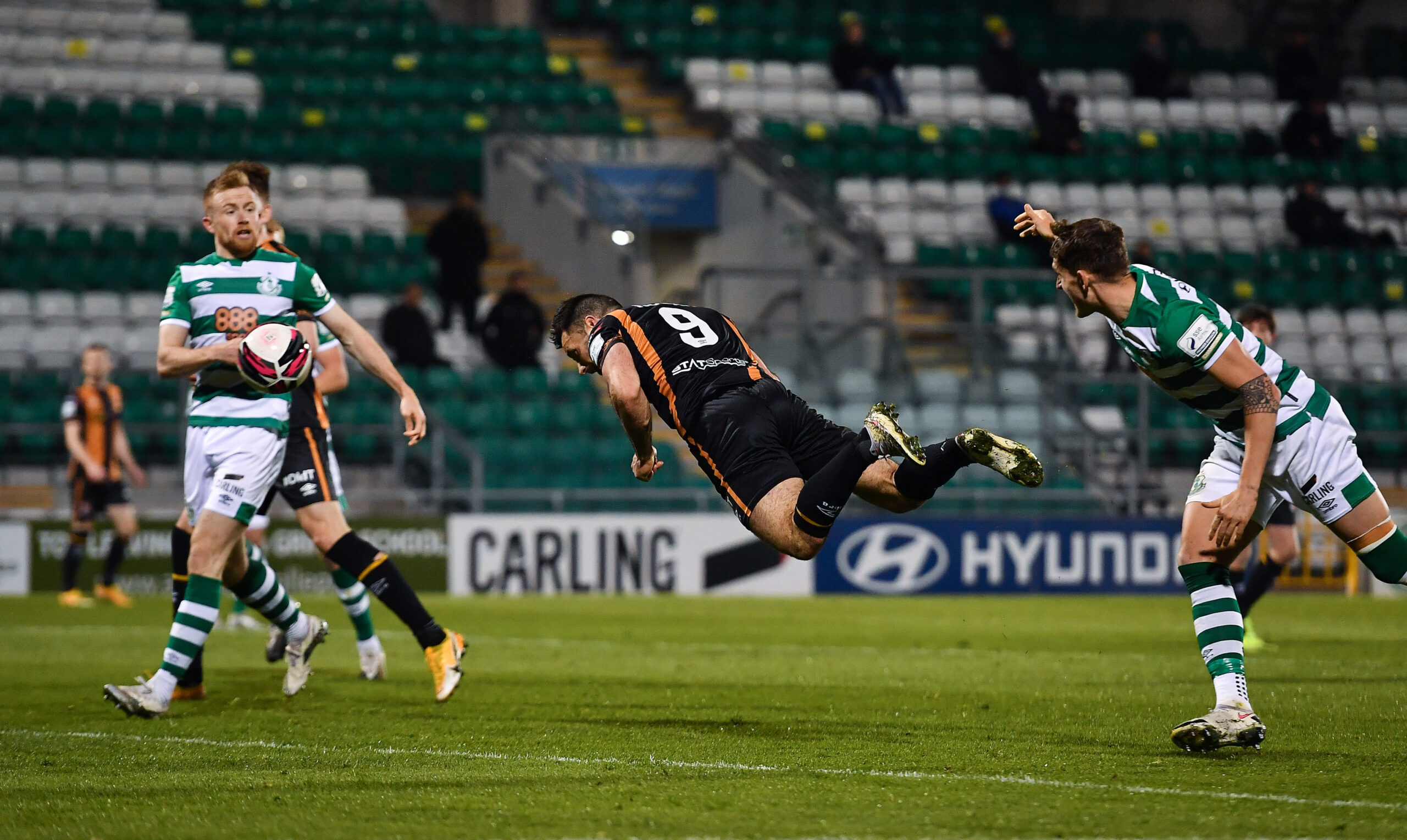 Substitute Rory Gaffney had an opportunity to restore the two-goal advantage for the reigning champions but he fired wide and that was the final effort of the evening in what proved to be another frustrating night for the Lilywhites.