Dundalk head coach Stephen O’Donnell was disappointed with the goals his side conceded in Friday night’s Malone Cup defeat to Drogheda United.

The Lilywihtes started well with new signings like Joe Adams and Dan Williams looking comfortable in their new surroundings but James Clarke broke the deadlock from a first-half corner with Drogheda’s first effort of the night.

“The first half was a bit messy and there wasn’t much happening on both sides,” said O’Donnell afterwards. “We didn’t really get a foothold in the game and we conceded a sloppy goal from a corner.

“I think some of the lads were eager to go and show the home support what they could do but things were a bit scratchy and we didn’t find the opposite full-back enough. We did that a lot better in the second half.”

The second half was interrupted by a lengthy stoppage after a supporter required treatment in The Shed and Dundalk were caught cold when play resumed as Chris Lyons drew a foul from Mark Connolly before converting the subsequent penalty.

“I thought we started the second half well before the interruption but we didn’t deal with a direct ball into the box and gave away a penalty,” said O’Donnell.

“Mark has been brilliant in pre-season but the surface at Oriel Park does take a little bit of time to get used to and that game will bring him – and the rest of our lads – on massively. 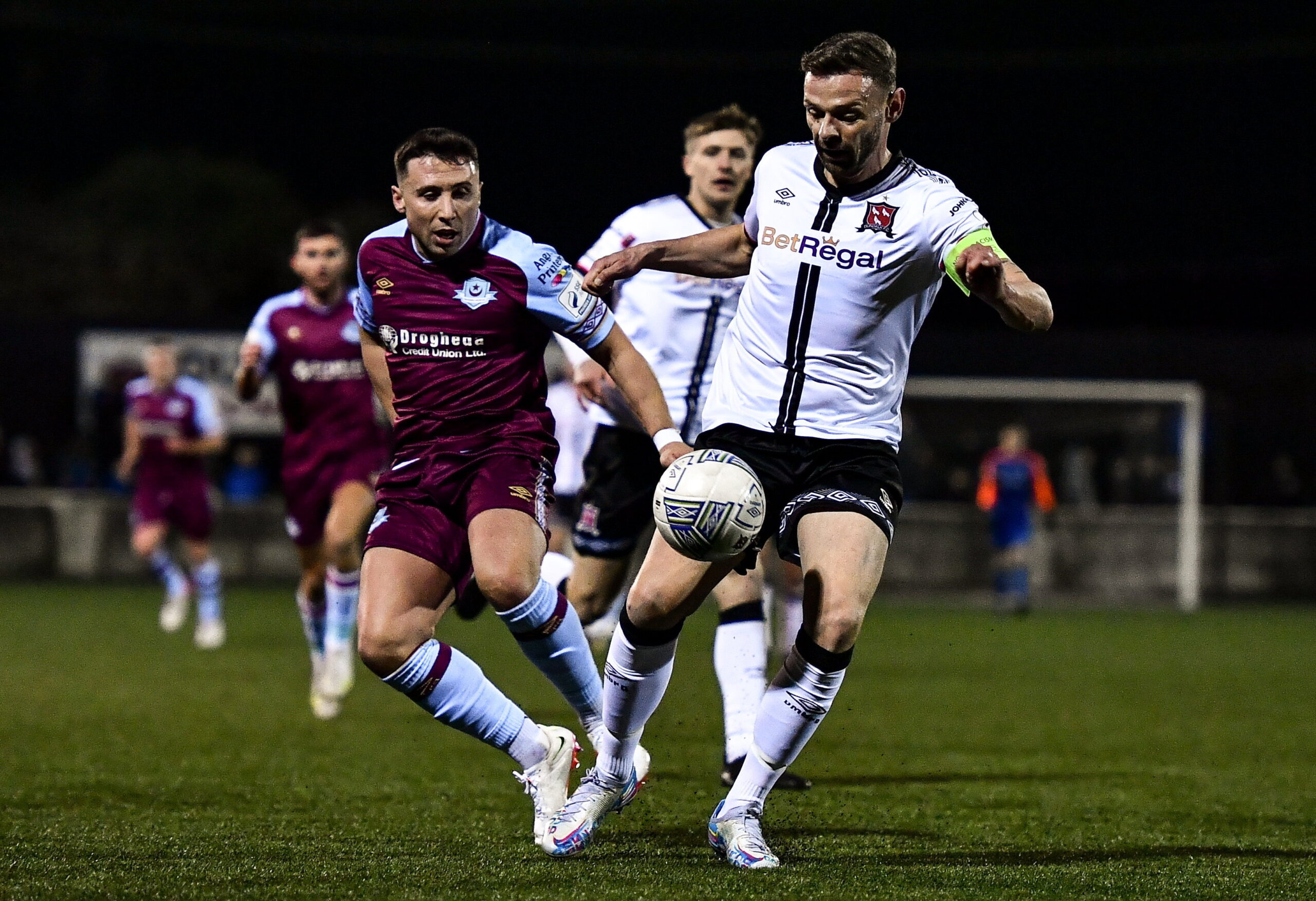 Andy Boyle in action during the Malone Cup tie with Drogheda United at Oriel Park. Photo by Ben McShane/Sportsfile

“When we pulled one back we finished the game strongly and played with more of a foothold in the game, and for the last 25 minutes we dominated the game and pushed for an equaliser.”

One of the big positives of the night was the return of Andy Boyle. The centre-back underwent surgery before Christmas and O’Donnell said his comeback was a massive boost ahead of the league opener against Derry City on Friday.

“It was good to see Andy back,” he said. “You could see in the half-hour that he was on that he’s moving well and he gives that bit of assurance ay the back.

“I’m very happy to get him back and I’m looking forward to seeing him get a full week of training under his belt.”

On the flip side, Darragh Leahy had to be helped off by the medical team in the final minutes after going down in the far corner of the pitch while trying to stop a cross into the box.

“Darragh went over on his ankle right in front of the hoarding trying to block a cross so we’ll have to see what damage there is but it doesn’t look to be anything too serious,” said O’Donnell.