Dundalk’s FAI Cup defence began with a gruelling first-round tie at the Markets Field in Limerick on Sunday afternoon as Treaty United pushed the holders all the way before finally succumbing to a Patrick McEleney goal in the first period of extra time.

Vinny Perth’s side dominated for large periods of the game but they were left frustrated by the performance of the first division side’s goalkeeper,  Tadhg Ryan, who made a host of good saves to take the first-ever meeting of the clubs to extra time.

However, Ryan – and Treaty’s – stiff resistance was finally broken with 104 minutes played when McEleney, who came off the bench in the second half, saw his low shot creep into the net with the aid of a deflection to book Dundalk’s place in Tuesday’s second-round draw and keep our hopes of a seventh successive FAI Cup final appearance alive. 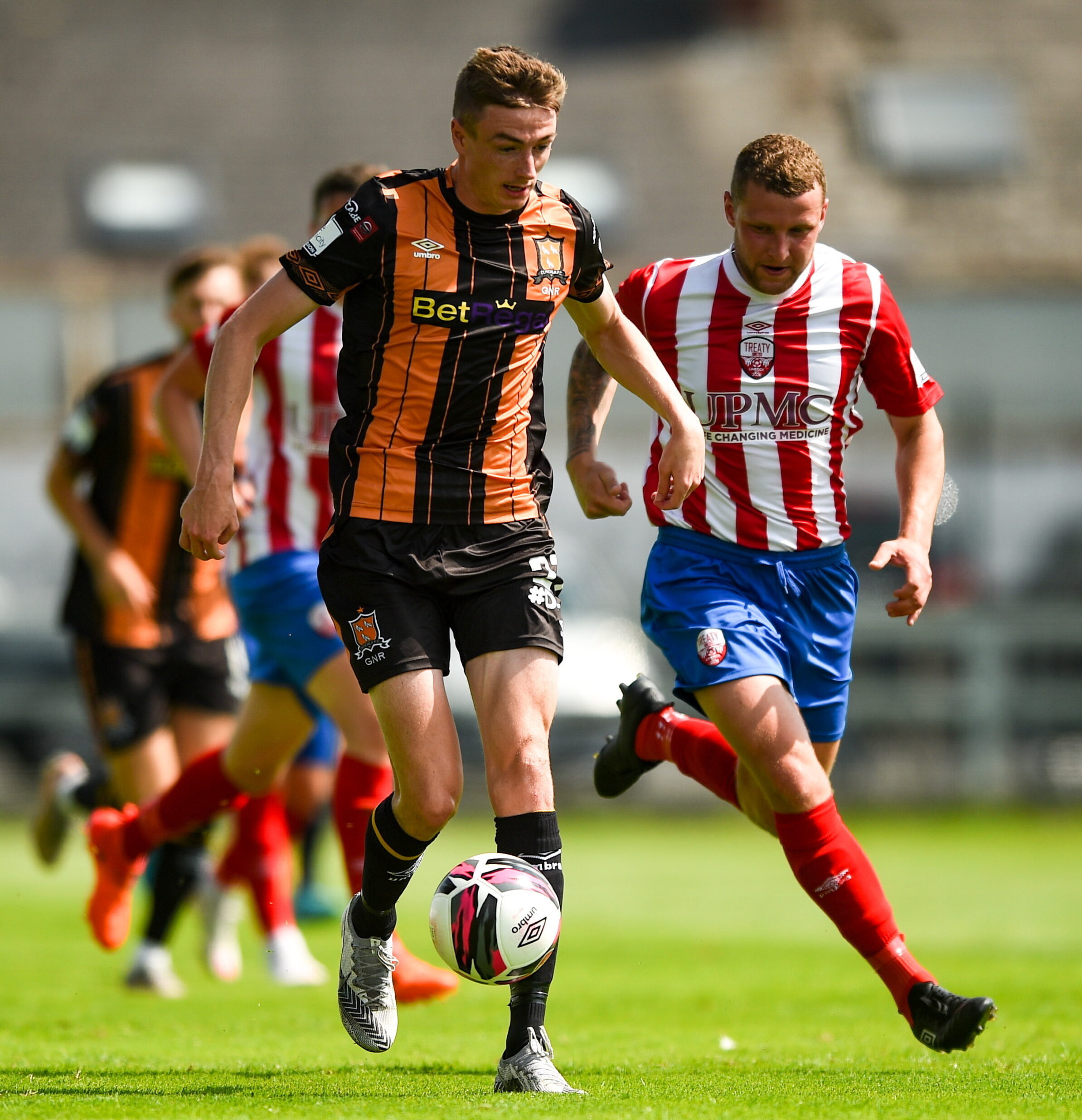 Daniel Kelly of Dundalk in action against Anthony O’Donnell of Treaty United during the FAI Cup First Round match at Market’s Field in Limerick. Photo by Diarmuid Greene/Sportsfile

Perth made four changes to the team that drew with Levadia Tallinn less than 72 hours earlier with Cameron Dummigan, Sean Murray, Greg Sloggett and Han Jeongwoo all restored to the starting XI.

The South Korean winger went closest to breaking the deadlock in the first half when he flashed a thunderous left-footed half-volley at the Treaty goal in the 13th minute but Ryan stuck out a strong hand to turn it around the post. Prior to that, the first chance of the afternoon fell to Darragh Leahy when he met Sean Murray’s free from the right but the full-back couldn’t keep his header down.

Tommy Barrett’s side showed plenty of energy in the sweltering conditions and their best opening of the half came in the 22nd minute when Joel Coustrain cut in nicely from the right but Alessio Abibi was equal to the task, smartly tipping the curling effort around the post. 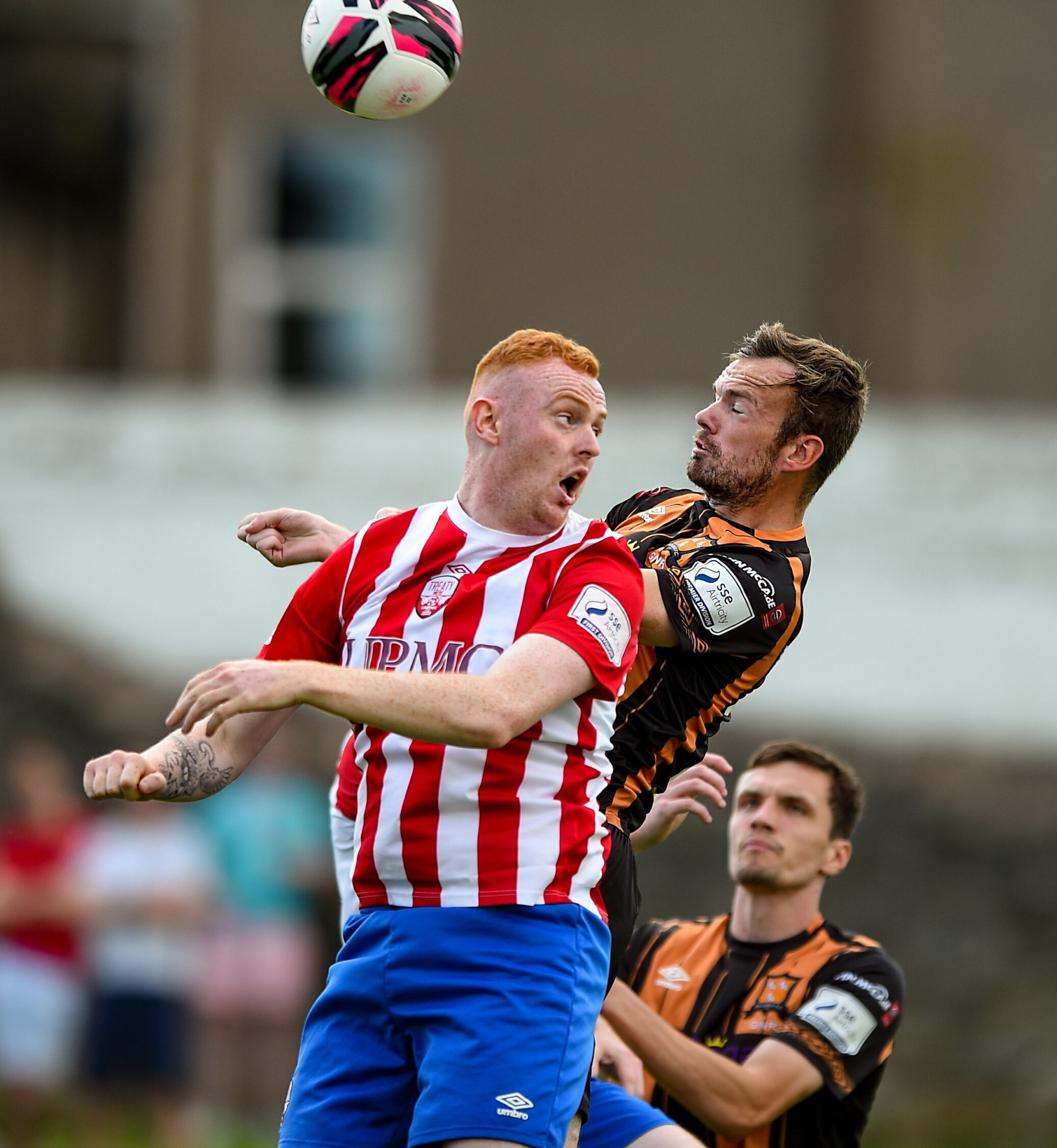 Kieran Hanlon of Treaty United in action against Cameron Dummigan of Dundalk during the FAI Cup first round tie at Market’s Field in Limerick. Photo by Diarmuid Greene/Sportsfile

The sides went in scoreless at the interval and with the temperature showing no signs of abating, Perth made his first change 14 minutes into the second half, bringing on Will Patching and McEleney for Sam Stanton and Sean Murray respectively.

Dundalk upped the tempo after that and a big chance came and went in the 63rd minute when Daniel Kelly forced his way past a couple of Treaty players on the right but he couldn’t pick out Han, who found himself in oceans of space in the six-yard box.

The cup holders created two more openings in quick succession after that. First up, McEleney was denied by a good Ryan stop before the Derryman then picked out the unmarked David McMillan but the striker’s header didn’t have enough power to bother the keeper. 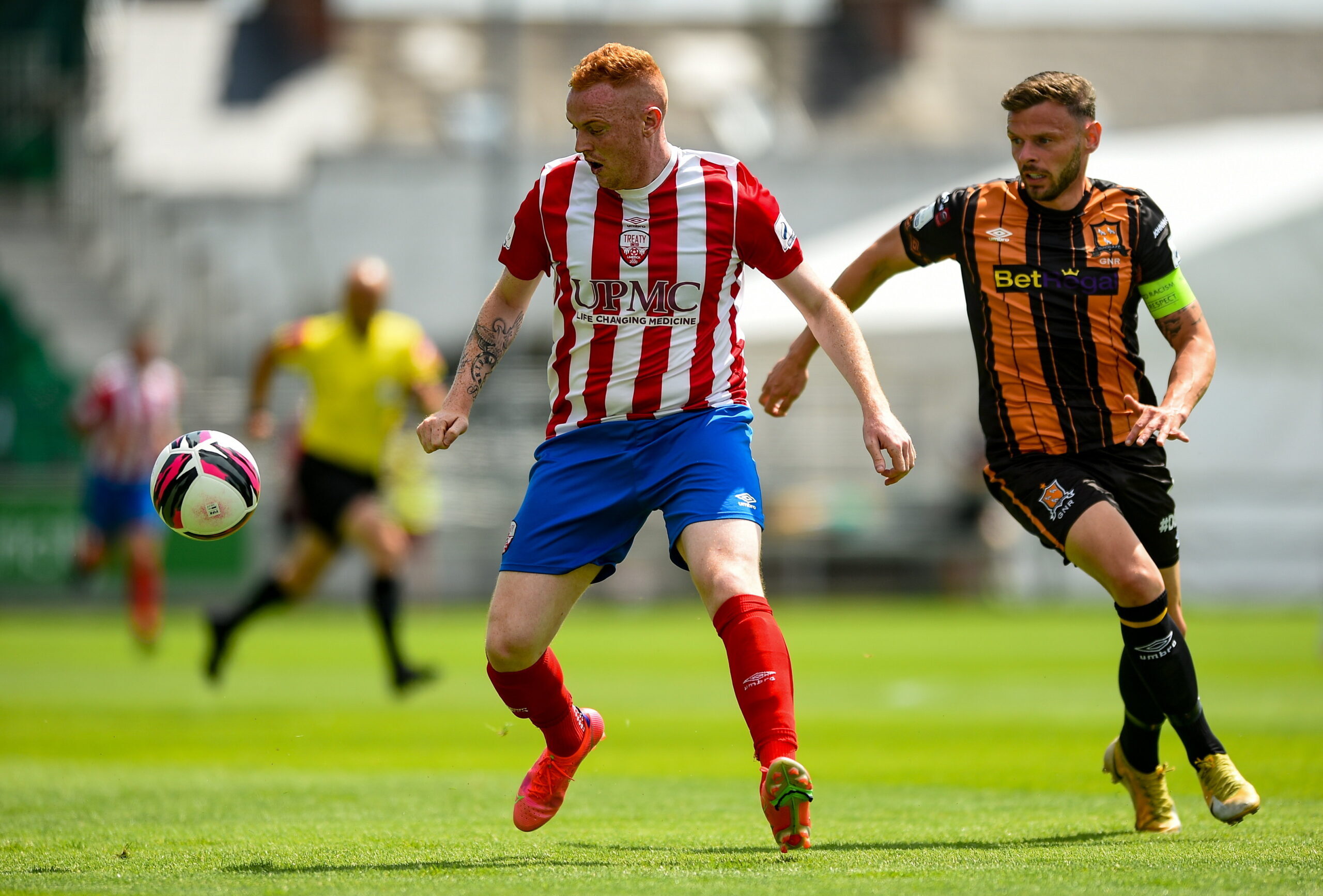 Kieran Hanlon of Treaty United in action against Andy Boyle of Dundalk during the FAI Cup First Round tie at Market’s Field in Limerick. Photo by Diarmuid Greene/Sportsfile

The Treaty netminder drew another warm round of applause from the home support shortly after when he clawed Daniel Kelly’s difficult cross over the top. From the corner that followed, Patching picked out McEleney but his first-time effort went wide of the post.

Dundalk continued to pen the hosts back and Andy Boyle guided a volley past the far post before Ryan made two more neat saves before the death, denying McMillan, who showed great technique to meet a Patching corner, before throwing himself to his right to save Patching’s goalbound free-kick.

Despite finding themselves on the back foot for most of the second half, Treaty, who were willed on by the home crowd, stuck to their task and William Armshaw gave them encouragement when he let fly with a 25-yard drive that cleared Abibi’s crossbar before Neil Doyle brought the 90 minutes to a close shortly after. 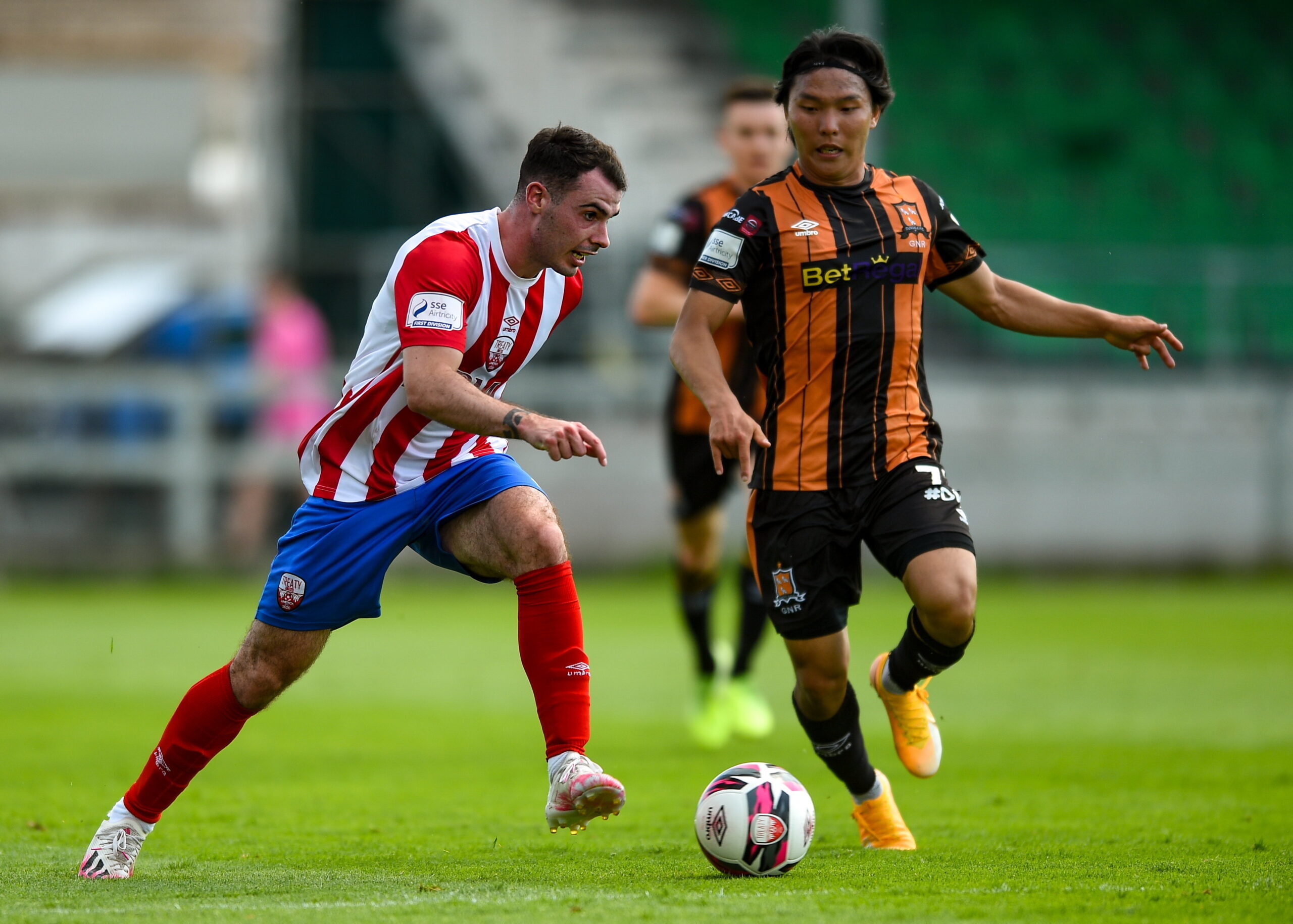 Joel Coustrain of Treaty United in action against Han Jeongwoo of Dundalk during the FAI Cup First Round match at Market’s Field in Limerick. Photo by Diarmuid Greene/Sportsfile

After huffing and puffing, Dundalk finally blew the Treaty house down when McEleney’s shot squirmed into the net but the tie was still far from over and it took a magnificent last-ditch block by Darragh Leahy to deny Treaty’s Alan Murphy an equaliser on the stroke of half time in the extra time.

With Andy Boyle leading by example, Dundalk held the battling hosts at bay and Treaty played the final eight minutes with 10 men after Anto O’Donnell was shown a straight red card for hacking Han down.