NO PODCAST, NO PARTY: PART ONE

NO PODCAST, NO PARTY: PART ONE

In a new three-part series for the DFC Magazine, Tom O’Connor spoke to members of three popular Dundalk FC-themed podcasts to find out a little bit more about each.

First up is The Town End, a post-match discussion-type podcast that is broadcast live on Facebook and Twitter shortly after every Dundalk FC game and available as a podcast the next morning.

DFCM: Where did the name for the podcast come from?
CC: Pingu had the name picked early on. I think it’s perfect…
DA: The Town End – it’s a great spot to watch a match.
AG: The name, as, far as I can remember, came from Pingu when he mentioned the idea from the off…a great name.

DFCM: What does Dundalk FC mean to you?
CC: Dundalk means community to me. There are so many people I know, a place I know very well with so many memories
DA: Dundalk FC means ‘home’ to me, especially being so far away.
SMK: It means a lot. From my late uncle Paul Thornton buying my annual stand season ticket at Christmas, playing with the youths and graduating to the first team and playing a handful of matches in the First Division winning league season to now full circle and bringing my sons to Casey’s Field/Oriel Park.
DH: Usually high blood pressure!
AG: That’s a tough one to answer in a short way…but I’d have to say it’s being part of a close community that spans generations of football fans. We are there because our parents/grandparents were. 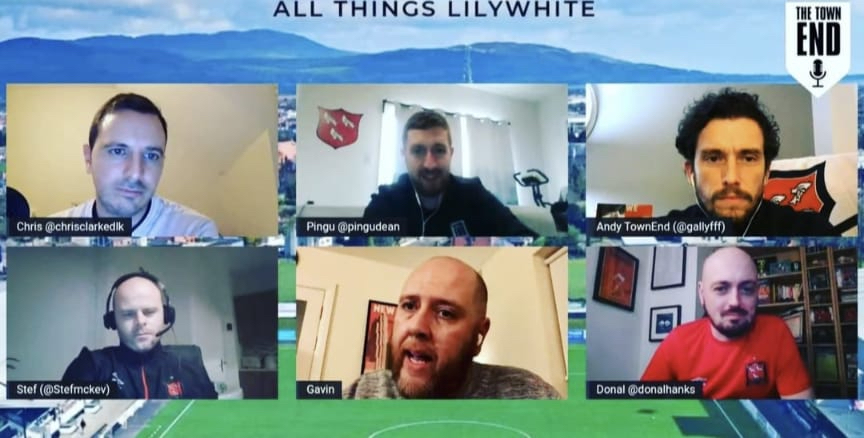 DFCM: What makes your podcast different?
CC: When we decided to do the pod, I wanted to do something completely different to a regular podcast. In the UK, post-match reaction shows are massive so I thought we could be a voice for the fans after a match plus some legendary guests to add some flavour too.
DA: I think we are different because I feel we know what we’re talking about, apart from Gally! We are fans, coaches, and former players. Also, the ‘live’ aspect of our show sets us apart from others.
AG: The fact that it’s live with post-match chat… so the raw emotion, whether good or bad, really makes the show what it is. Live comments and interaction where (almost) anything goes.
SMK: I think we have people from all corners of the ground. Myself in the Town End, Gally and Hanks in the stand, Chris on the broadcasting production team and Dean as an overseas fan. Along with some fantastic guests, too many to name. Plus, we’re brutally honest in my opinion….
DH:*Martin Tyler voice* ‘Four or five clowns who don’t know what they’re talking about for about an hour…AND IT’S LIVE!’

DFCM: What was your favourite episode and why?
CC: Wow! Where do I start? I had a few people on my wish list that I hoped we could reach out to and get on the show, but my expectations have been blown away. Having legends like Martin Lawlor, Alan O’Neill, Faz, Dave Rogers, Darius Kierans, Dermot Keely, John Gill and many more, it’s been amazing. I also like giving the DFC Community a platform too which I think is important.
DA: My favourite episode was our first one. It was the start of a new season and we had so much hope after winning the President’s Cup. It soon disappeared that season though!
SMK: There have been quite a few but I’m gonna be greedy and say two. The first was the one with Martin Lawlor, whose passion for the club is infectious. Then, my old friend Dave Rogers, who had been linked to the managerial position when he was on. His elite mentality and vision of how football should be played intrigued me greatly!
DH: There have been plenty but the episode where Pingu’s WIFI went down and left me on my own on the screen with nothing to say always stands out!
AG: Easy, Martin Lawlor….right up there for me, a brilliant man to listen to, just so passionate about the club and he’s one of our own.

DFCM: What are your hopes for Dundalk FC in the future?
CC: I think we are on a journey back here but I hope Dundalk can get back to being a team that challenges throughout the season. I think we have had so much success on the field, yet we failed to build off it, so I would love to see us start to build an environment in Oriel, infrastructure-wise, to the standard that the team on the pitch strives to.
DA: I hope the Town can get back to competing at the top again in the future. European adventures become a very special time for fans so to get back there again would be great.
SMK: If we can gain a European spot this season it will be a massive success and a platform to build on for years to come and hopefully see us get back to where we belong, winning league titles and cups.
AG: Plenty of things I’d hope for but a sustainable club that can hold its own financially and compete each season for league titles…A plan for a stadium upgrade, however long it takes, would be fantastic for everyone.
DH: That we’re class again and back where we belong. Back giving me high blood pressure! C’mon the Town!

DFCM: Thanks very much, everyone!

As the Town Enders would say, no podcast, no party!