Dundalk suffered their second defeat at Richmond Park in three days this time in the SSE Airtricity League losing 1-0 to St. Patrick’s Athletic on Monday night.

Billy King’s first half strike was enough for the Saints to take all three points and see Dundalk drop to eight place in the standings.

Vinny Perth made three changes to the side which contested the extra.ie FAI Cup semi-final on Friday evening with David McMillan, Daniel Kelly and Raivis Jurkovskis coming in for Patrick Hoban, Sean Murray and Daniel Cleary, with the latter serving a one match suspension after picking up an eighth yellow card of the season.

It was a quiet opening with neither side able to reach the heights of the frantic opening of the semi-final three days previous however Dundalk almost took the lead with two quickfire chances on the quarter hour mark.

Will Patching’s free-kick was expertly tipped over the bar by Jaros and from that corner, Michael Duffy’s clever kick fell to Sam Stanton but his effort was blocked on the line by the home defence.

Former Lilywhite Robbie Benson was the first Pat’s man to threaten when his volley from the edge of the box looked goalbound however Cameron Dummigan got his body in the way to prevent.

Darragh Leahy looked like he had given the Lilywhites the lead only for Jaros to produce an excellent save to keep his diving header out.

Much like Friday though, the hosts took the lead after a spell of Dundalk pressure when Billy King cut in off the right and fired to the net from 20 yards past Cherrie. 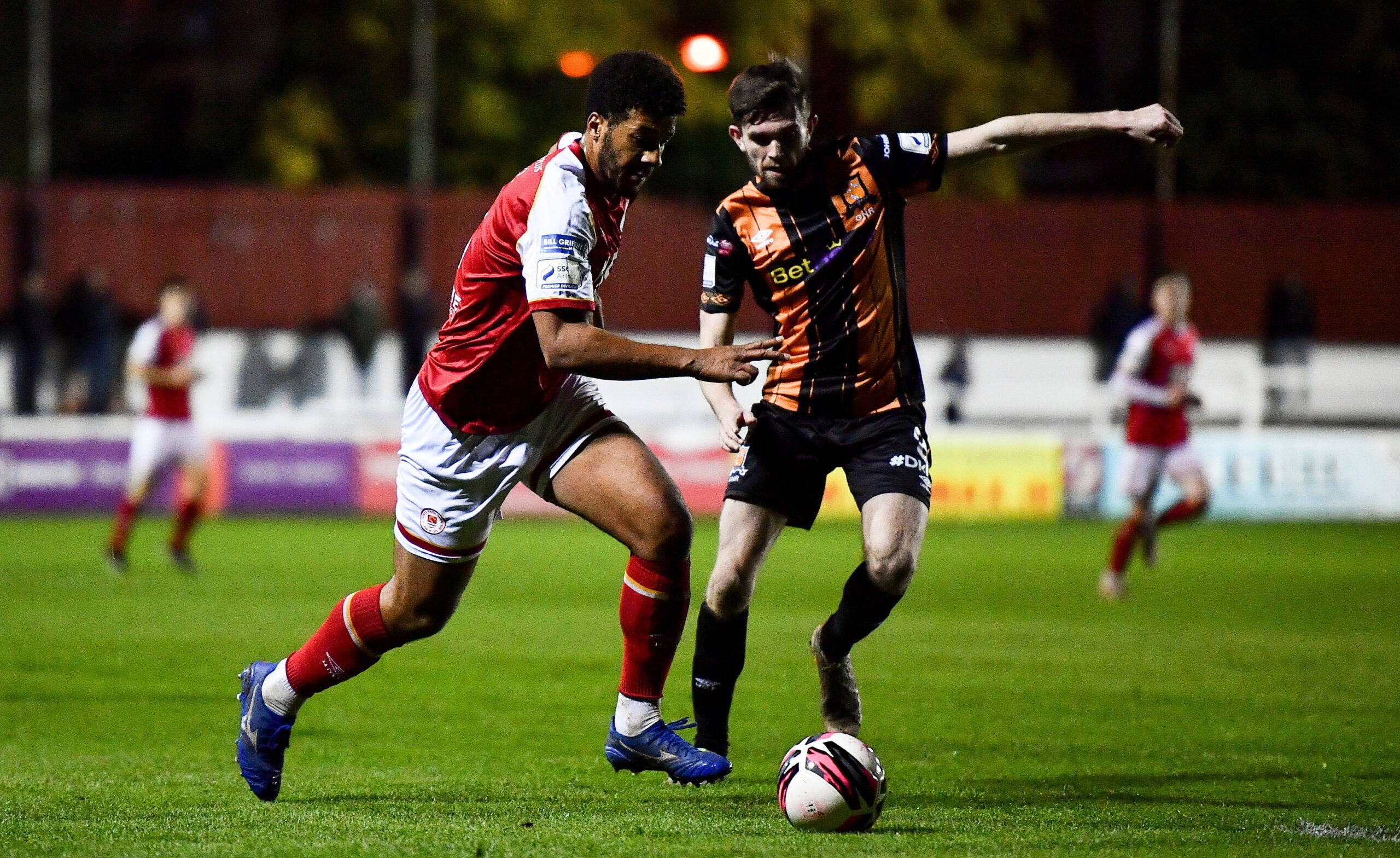 Sam Stanton comes away with the ball. Photo by Ben McShane/Sportsfile

Kyrian Nwoko almost made it 2-0 when he got free at the back post however his header was blocked on the line.

Duffy had a header deflected inches wide of the post and from the following corner it looked like the Lilywhites had equalised.

The ball fell to Patching on the edge of the area and he showed flawless technique to volley the ball to the net however it was ruled out for Greg Sloggett being in an offside position.

The second half began at a slower pace than the first half finished and King had a shot go just wide for Pat’s as he tried to get his second of the night.

At the other end, Daniel Kelly was well placed from Duffy’s cross but his shot was well over the bar. 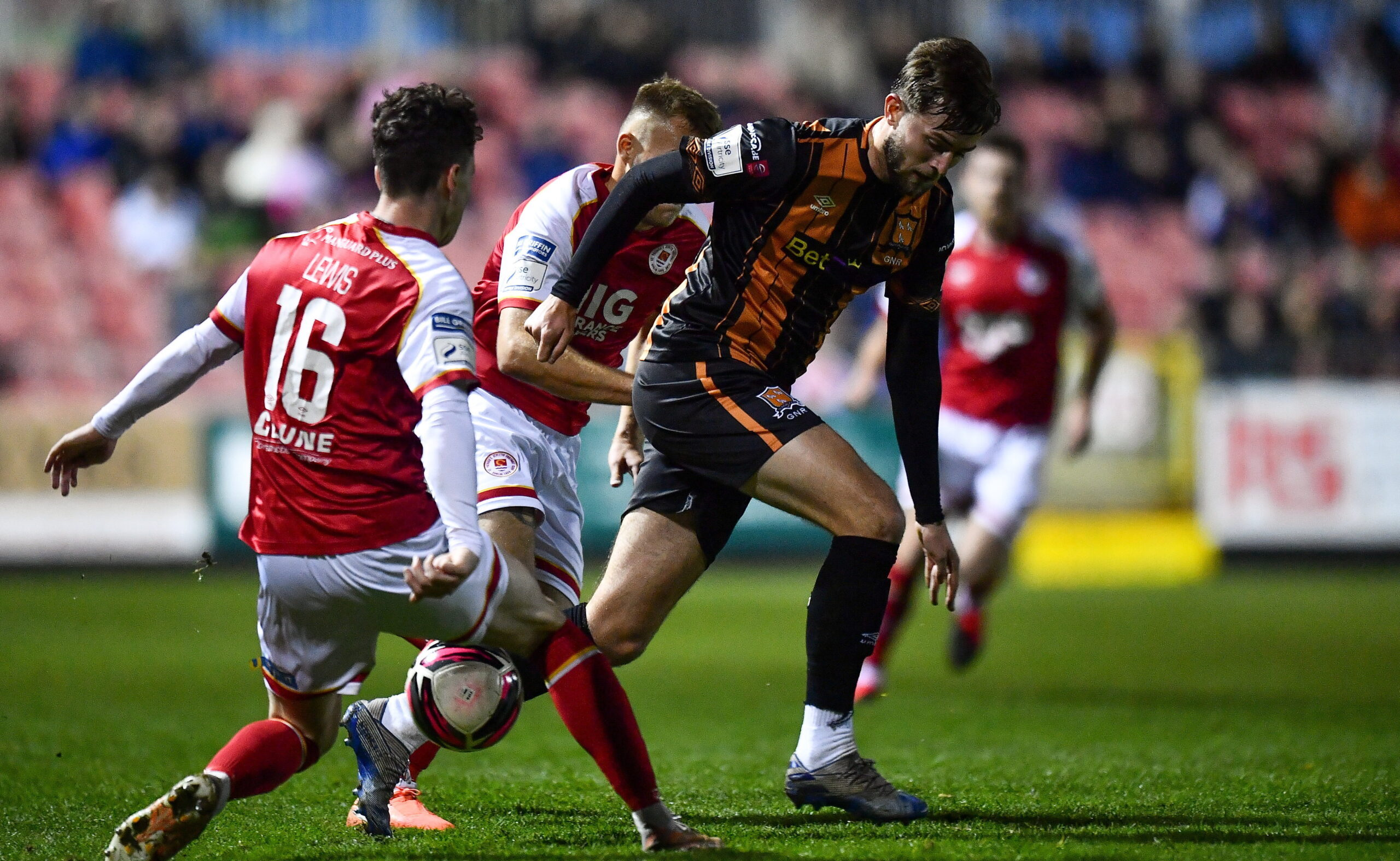 Will Patching skips past Alfie Lewis. Photo by Ben McShane/Sportsfile

Duffy himself then got the better of Jack Hickman and was in behind but his cross turn shot was inches wide of the post with Jaros beaten.

Patching then lined up one from distance with just under half an hour left on the watch but it cleared the crossbar.

The game was scrappy for a period after that as both teams made changes which disrupted the flow.

Leahy looked like he had the perfect chance to get the equaliser when he got in the right position to head a cross however he missed the target from point blank range.

They wouldn’t get another and the home side held out for the three points.