PRESIDENT’S CUP: A LOOK BACK

PRESIDENT’S CUP: A LOOK BACK

Introduced in 2014, the President’s Cup is the annual curtain-raiser at the beginning of every season, where the SSE Airtricity League Premier Division winners and FAI Cup winners of the previous campaign face-off.

With the exception of the inaugural game, Dundalk have featured in every President’s Cup fixture from 2015 onwards, winning the trophy on two occasions.

Ahead of this Friday’s meeting with Shamrock Rovers in Tallaght Stadium, we look back at Dundalk’s five previous appearances in the President’s Cup. 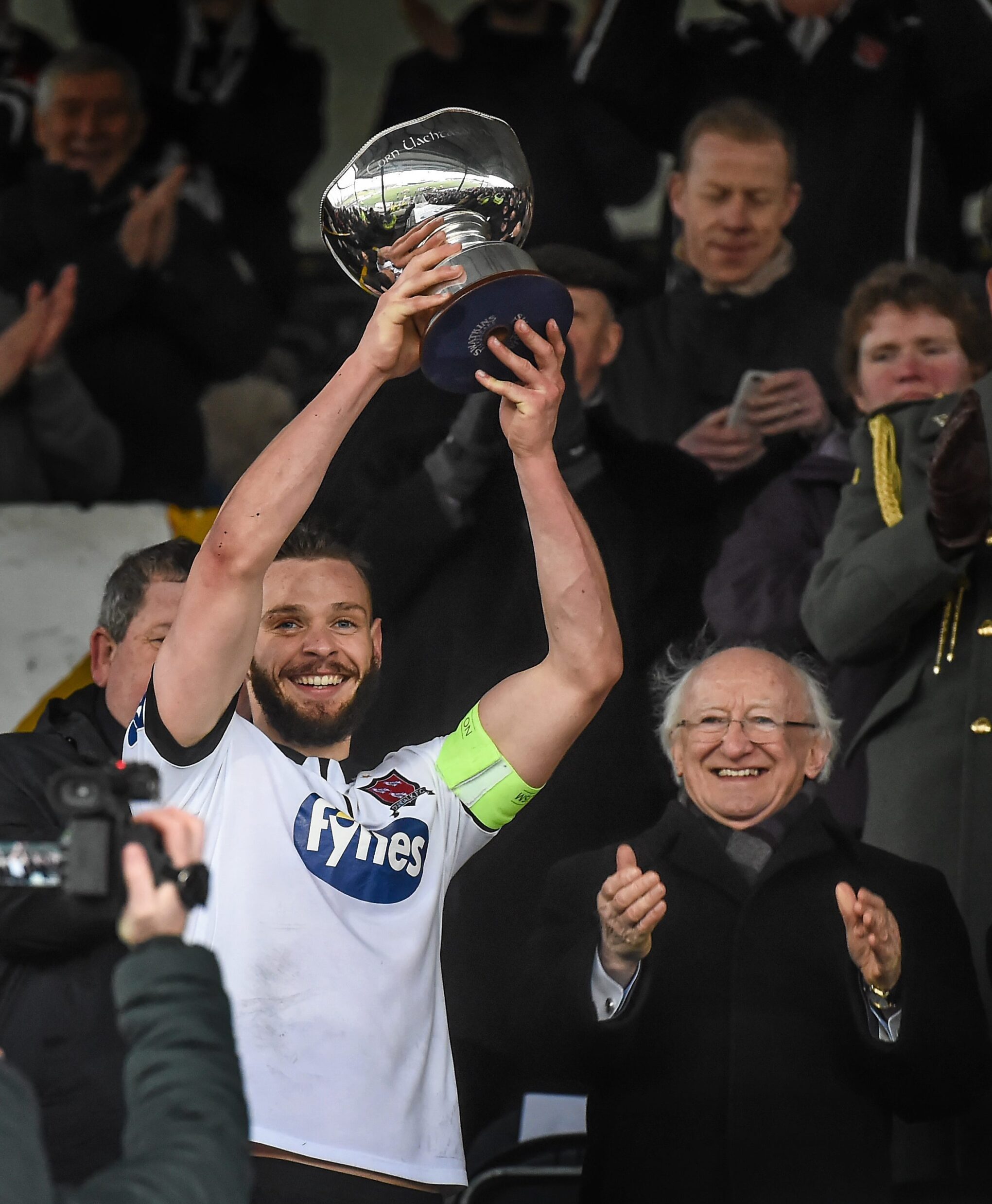 The Lilywhites had ended the previous season in dramatic fashion, clinching the league title on the final day of the season with a 2-0 win over runners-up Cork City, adding to their EA Sports Cup win earlier in the season.

However, it was the 2014 FAI Cup winners who took the lead after 35 minutes as Chris Forrester turned home a cross from Conan Byrne to break the deadlock.

The game had barely restarted before Dundalk were level. Ronan Finn pressed the Pat’s backline, forcing Jason McGuinness into an error and Daryl Horgan punished him, rifling a blistering 20-yard volley into the top left-hand corner of Brendan Clarke’s goal.

The goals continued as Dundalk pulled ahead to cap a crazy three-minute spell. Finn was again involved, his cross from the left evading a host of bodies, before falling kindly for Richie Towell to guide home. The Lilywhites then comfortably saw out the second half to secure a maiden President’s Cup win. 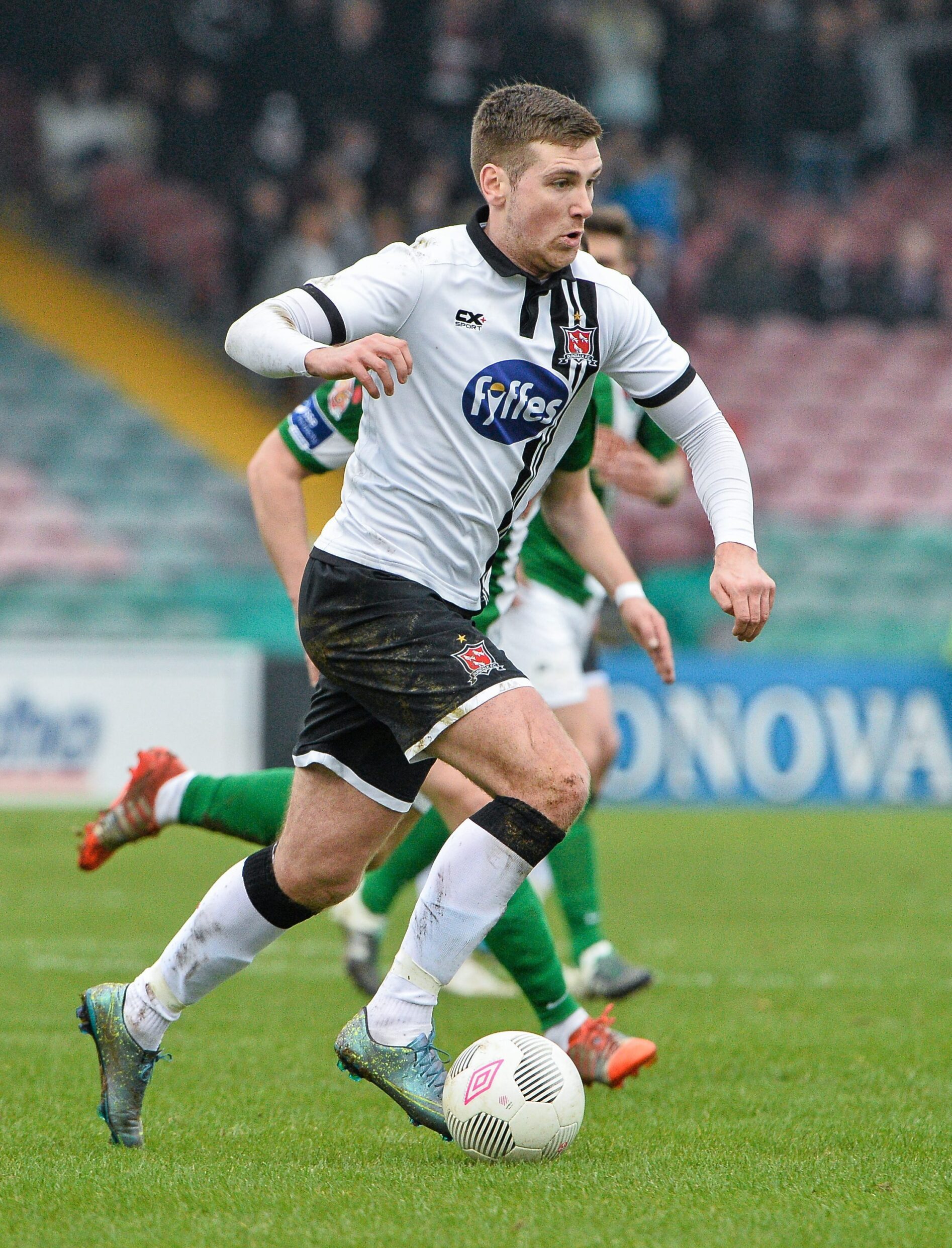 Coming off the back of a domestic double in 2015, including an FAI Cup final win over their President’s Cup opponents, Dundalk would have been expecting a similar result when this game rolled around at Turner’s Cross, but that was not the case as the Rebels beat the Lilywhites for the first time in 10 meetings.

John Caulfield’s new look side took the lead after 20 minutes when former Dundalk man Sean Maguire pounced on a rebound from Stephen Dooley’s shot to set up Gavin Holohan for a tap-in. Maguire was heavily involved throughout the game and he added Cork’s second with 62 minutes on the clock with a diving header that nestled in the bottom right corner.

Brian Gartland was sent off for a second yellow after hauling down Steven Beattie late in the game as Cork secured the victory, laying down a marker ahead of the new season.

Caulfield’s side would go on to beat Dundalk in the FAI Cup final, but the Lilywhites retained the league title for the third successive year whilst making history in the Europa League group stage. 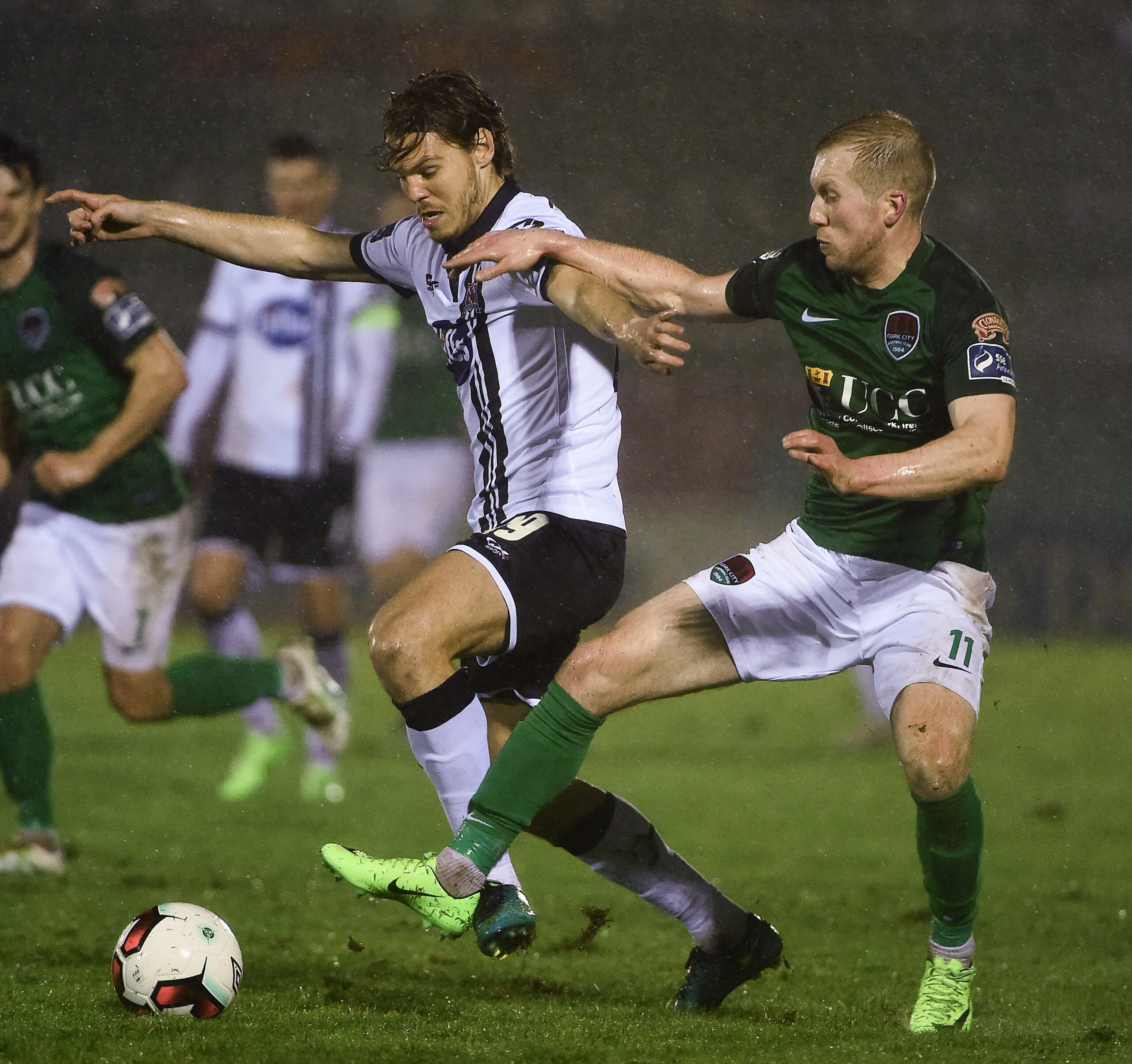 17 February 2017; Niclas Vemmelund in action against Stephen Dooley in the 2017 President’s Cup in Turner’s Cross. Photo by David Maher/Sportsfile

The bad luck against Cork in the President’s Cup continued in 2017 as a much-changed Dundalk side lost 3-0 to John Caulfield’s side at Turner’s Cross.

Sean Maguire, who had been a thorn in the Lilywhites’ side ever since leaving the club at the end of 2015, opened the scoring after 16 minutes after Garry Buckley found the pacey striker with a long ball upfield which caught out Paddy Barrett; Maguire fired through the legs of Gabriel Sava in the Dundalk goal.

Dundalk struggled to create clear-cut chances throughout the game, while Cork had a number of opportunities to put the game to bed before they finally added a second after 69 minutes with an excellent Kevin O’Connor free-kick.

The Rebels added a third late in stoppage time through Karl Sheppard as Cork retained the President’s Cup. They would go on to win the league and FAI Cup double, despite losing Sean Maguire and Kevin O’Connor to Preston halfway through the season. 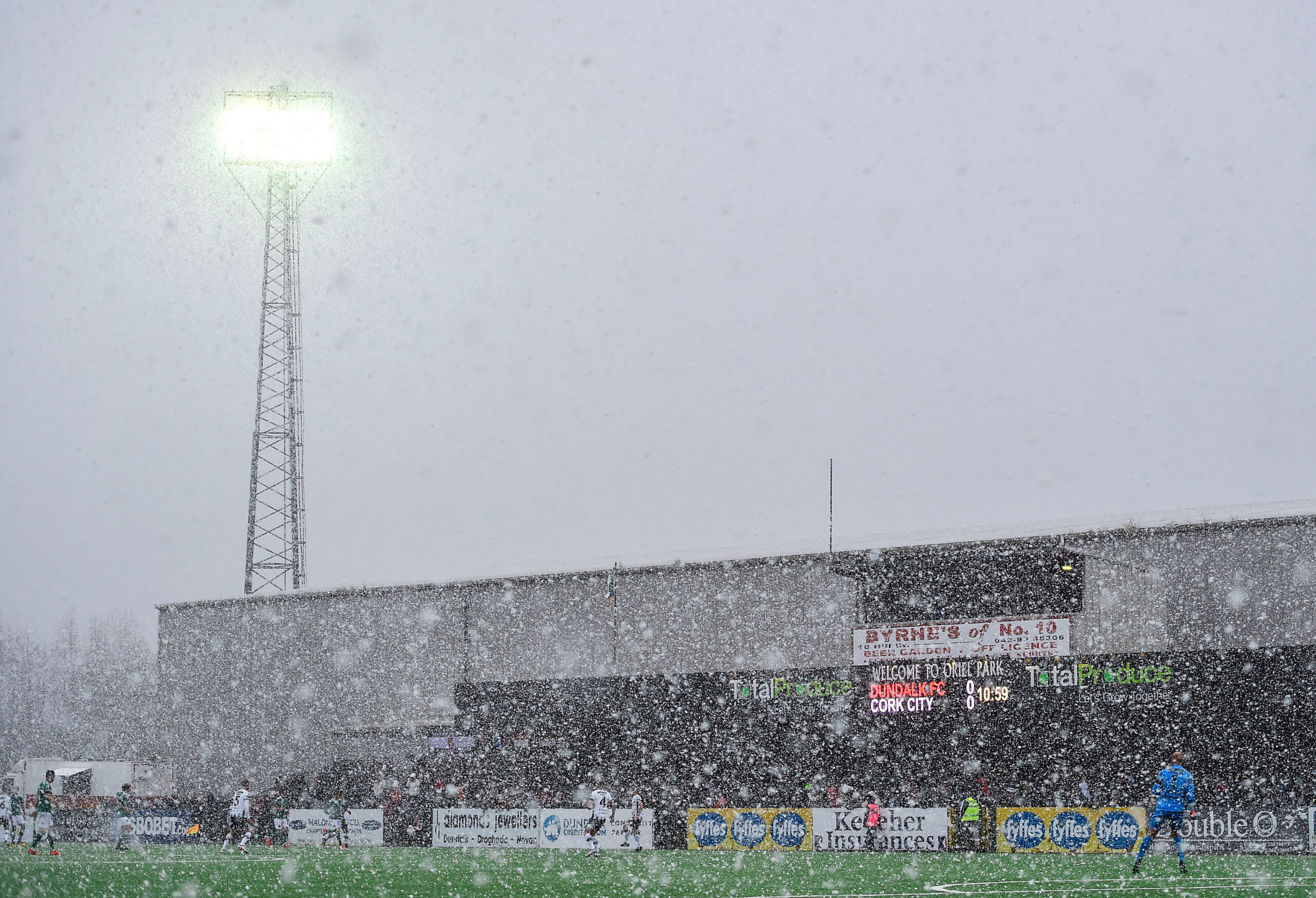 A general view of action during the 2018 President’s Cup at Oriel Park. Photo by Seb Daly/Sportsfile

By far the most exciting meeting the two sides ever had in the President’s Cup, there was action from start to finish as a second-half collapse from the Lilywhites allowed Cork to run away with the game and secure a President’s Cup victory for the third straight year.

A blizzard hit Oriel Park just after kick-off to disrupt the flow of the game and cover the playing surface in a white blanket of snow, but it didn’t impact the quality on display as a first half double from new man Ronan Murray gave Dundalk a 2-0 lead at half time.

Following Sean Hoare’s departure due to injury, Chris Shields was dropped into the back four, and Cork targeted him as they scored four in the second half in a dramatic turnaround.

Karl Sheppard halved the deficit moments after his introduction at the beginning of the second half, and Barry McNamee headed home a Kieran Sadlier cross to level terms on 56 minutes, before Sadlier turned goalscorer to send them in front. Graham Cummins then made sure of the result for John Caulfield’s men late on as he turned home another Kieran Sadlier cross.

This, however, would be the peak of Cork’s season, as Dundalk regained the league title from their rivals, before securing the double after a 2-1 win over Caulfield’s team in the FAI Cup final. 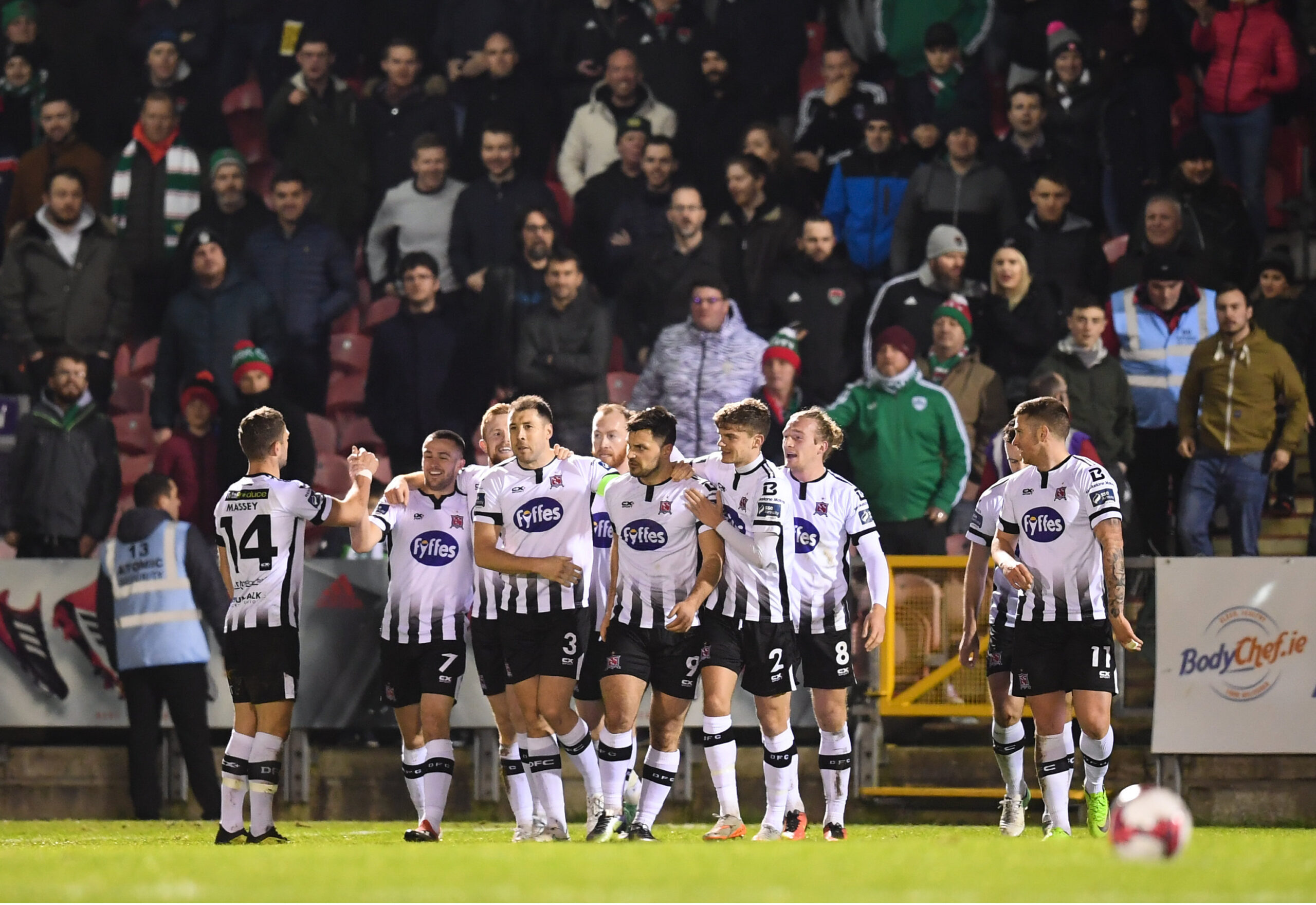 While City had the better of the second period, an utterly dominant first half for the Lilywhites ensured that the silverware returned to Oriel Park.

Headed goals from Dane Massey and Patrick Hoban had Dundalk in the ascendancy at the break. Kevin O’Connor, whose return to Cork on loan from Preston North End was only confirmed the day before the game, gave the home side hope by scoring with an excellent free-kick just moments after being introduced.

However it wasn’t enough to prevent Dundalk’s victory in what was the last President’s Cup fixture before this weekend, after last year’s postponement due to Storm Ciara. The Lilywhites went on to secure back to back league title wins, while they were bested in the FAI Cup final by Shamrock Rovers.