Stephen O’Donnell is hoping to be involved in another memorable Louth Derby when Dundalk entertain Drogheda United at Oriel Park on Friday night.

The SSE Airtricity League Premier Division encounter will be the 169th time the sides have met in a competitive game since the derby was first played back in August 1963. On that occasion, Dermot Cross scored a late winner to secure Dundalk a 4-3 victory in a Dublin City Cup game played in front of 4,000 people at Oriel Park.

The first league meeting between the clubs came three months later when Cross, Jimmy Hasty, Francie Callan (2) and Mick Dalton (2) were all on target as Dundalk hit Drogheda for six at Lourdes Stadium in November 1963.

A further 98 league matches have taken place since then and Dundalk’s record makes for positive reading – W53 D25 L20 – although the Drogs did win the last encounter at Head In The Game Park back in March.

“My biggest memory of the Louth Derby games that I was involved in as a player at Oriel Park was scoring the late goal against Drogheda United with the last kick in 2013. I didn’t score that many but that was a good one!” he smiled.

“It came just after Marty Shields passed away and it was a nice way to remember him. I saw his daughter Glenda after the game against Shelbourne last week which brought back memories too. 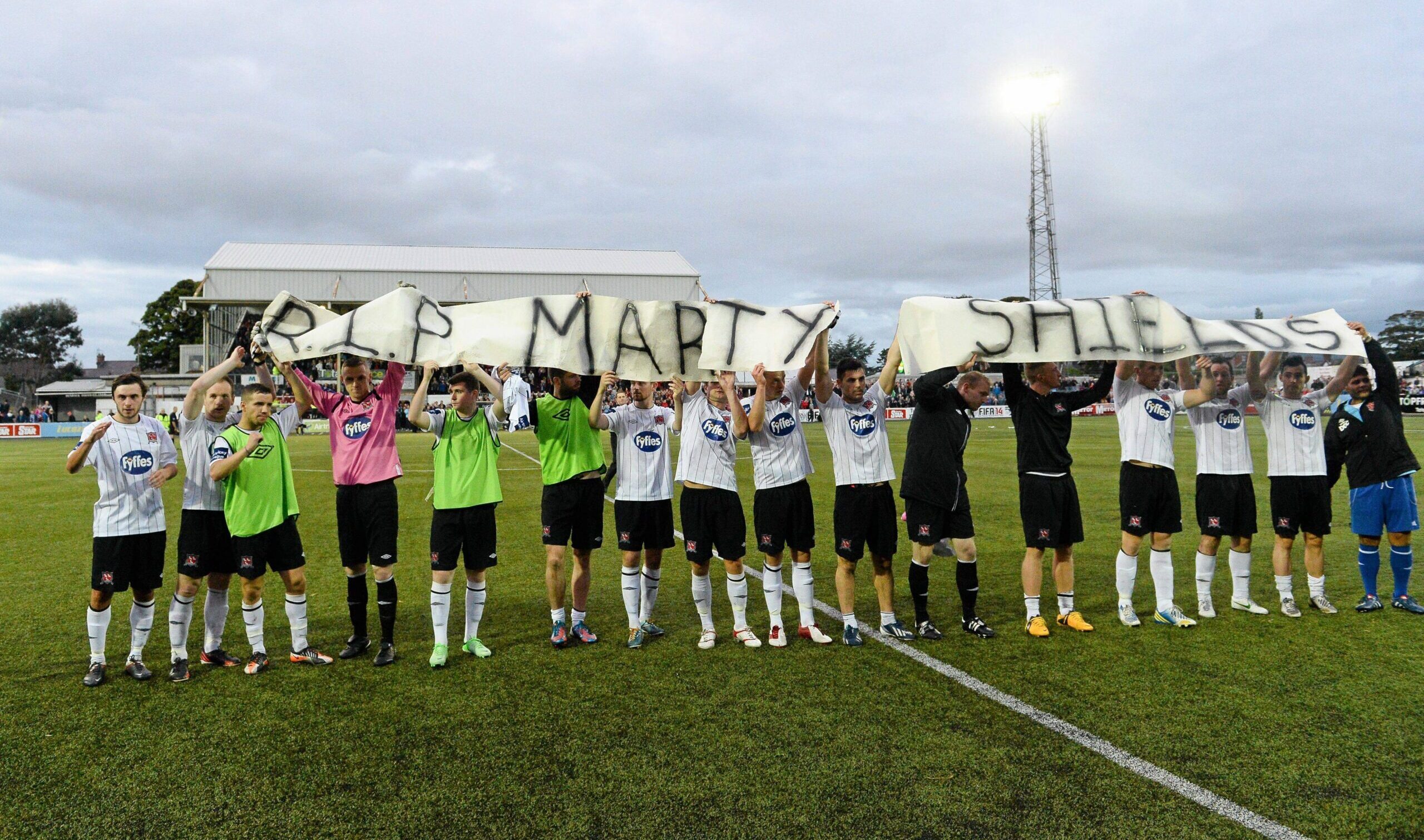 8 September 2013; The Dundalk players hold a banner up in tribute to lifelong supporter Marty Shields who passed away before the Louth Derby with Drogheda United. Photo: David Maher / SPORTSFILE

“Traditionally, derby games are always tight battles and they always have an extra bit of meaning, no matter where the two teams are in the league.

“There’s always a competitive edge to it. For a lot of our lads, it’s their first taste of a proper derby at Oriel Park and we’re really looking forward to it.”

Both sides go into the game on the back of some decent form. Dundalk have picked up 10 points from their last five games and are looking for a fourth consecutive home victory while Kevin Doherty’s Drogs – who also beat the Lilywhites in the Jim Malone Cup in early February – have lost just one of the six games that followed the 1-0 win over Dundalk in March.

“We know it will be a tough game,” said O’Donnell. “Drogheda United have been on a good run. They had a bad start against Sligo Rovers last week and were two down after just five minutes but they came back into the game and lost it at the death after having a man sent off.

“Between the Jim Malone Cup and the first league game, they’ve beaten us twice this season so it’s not a case that we’re sleepwalking into the game on the back of two convincing wins over them this season.

“They’ve beaten us twice but, from our point of view, we’re really looking forward to it and we’ll be trying to take the momentum from last Friday’s win over Shelbourne into the game.”

Team news
Dundalk will have to plan without Steven Bradley who has been given a one-game ban for his red card against Shelbourne last week. Dan Williams is doubtful but Robbie Benson is expected to be fit and John Mountney, who was an unused substitute against Shels, is back in full training after making a full recovery from a serious knee injury.