A host of familiar names will return to Oriel Park on Friday night when Derry City come to town for one of the biggest games of the season thus far.

Their presence will only add extra spice to what should be a tantalising encounter but Lilywhites head coach Stephen O’Donnell said he was only concerned about Dundalk’s present, and not the past.

“There will obviously be a lot of focus on the lads in the Derry team who are coming back to Oriel Park,” he said. “A lot of them had a good history with Dundalk. They are all good lads, I know most of them, and they were excellent for Dundalk.

“They’ll be looking forward to coming back and we look forward to welcoming them back but our crew here at the minute have been brilliant and we’re forming a new team, a new squad, and a new identity and, hopefully, in years to come we’ll be talking all about this current crop. 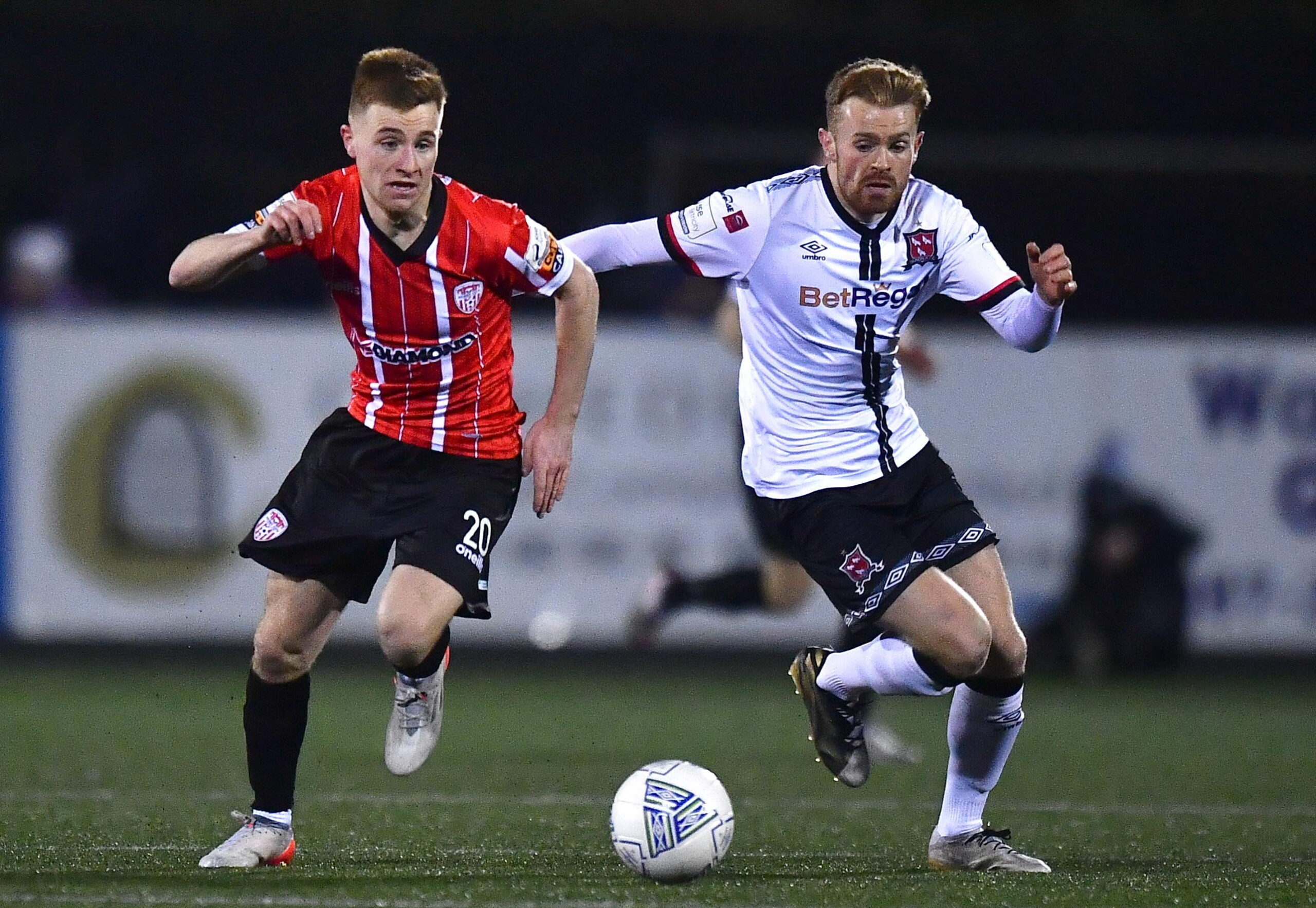 Brandon Kavanagh of Derry City and Paul Doyle of Dundalk in action during the 2-2 draw at Oriel Park on the opening night of the SSE Airtricity League season in February. Photo by Ben McShane/Sportsfile

“We have already enjoyed some good memories this season,” he added. “We have won 10 on the bounce at home and the players that we have now have been brilliant.

“Some of them have been here for a longer period of time but in the main, we have new players who we believe can establish themselves as firm favourites and really good Dundalk players in their own right from here on in.”

O’Donnell and Higgins were part of the Dundalk side that won the league title in 2014 and have remained close ever since. O’Donnell, however, said that friendship will go out the window on Friday night.

“We’ll have a chat before the game but when the whistle blows, both sets of coaches will be fully focused on their own team,” he said. “Ruaidhri is a good friend but you forget about that during the game. Your only focus is on what is happening in front of you. 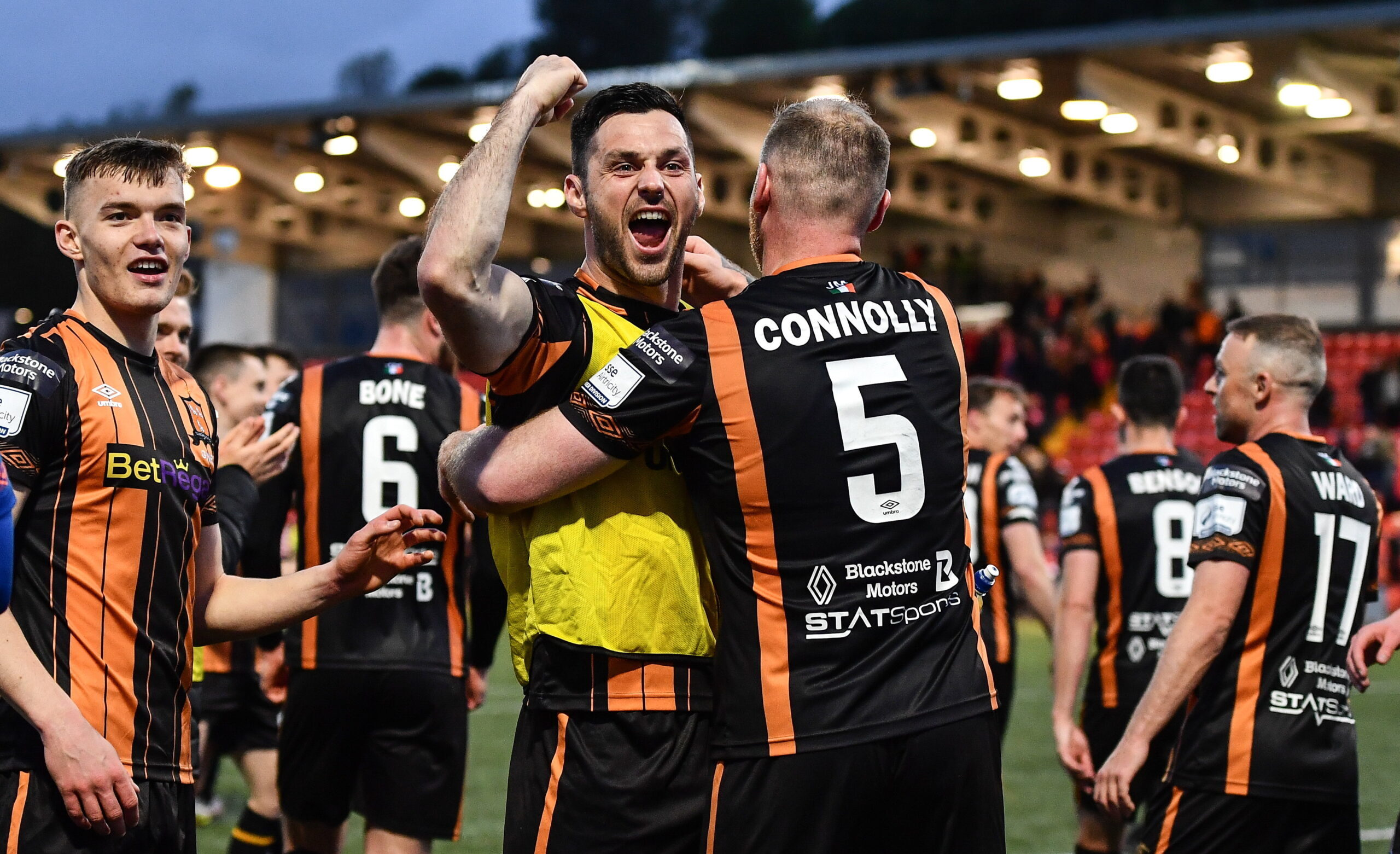 Patrick Hoban and Mark Connolly – who signed for Derry City last week – celebrate Dundalk’s win at the Brandywell in May. Photo by Ben McShane/Sportsfile

“In Ireland, the industry is so small and if you’re coaching, you’re inevitably going to be looking at and competing for similar players. That’s the game we’re in. It doesn’t make a difference to our friendship but Friday night will be like any other Friday in that I want to win the game.”

A Dundalk victory would not only make it 11 on the spin at Oriel Park but also see the Lilywhites move five points ahead of Derry and close the gap on league leaders Shamrock Rovers to just four points.

This will be the third meeting between the clubs this season. A 2-2 draw at Oriel on the opening night was followed by a 2-1 win for Dundalk at the Brandywell in May and midfielder Greg Sloggett, who was named as the 1903 Dundalk FC Supporters Club Player of the Month for July this week, said there was no hiding the importance of Friday night’s fixture.

“It’s the business end of the season that we’re coming into now,” he said. “As much as every game is important, now is the time when push really comes to shove and we need to get points on the board. We want to be in the mix for Europe next year and put ourselves in the best possible position to do that.”