Dundalk will be looking to extend their long, unbeaten record at the Ryan McBride Brandywell when they meet Derry City in a crucial SSE Airtricity League Premier Division fixture at 3pm on Sunday afternoon.

The last time the Lilywhites tasted defeat at the Brandywell was back in 2012. Since then, they have won 13 of the subsequent 16 meetings that have taken place in all competitions between the clubs in the Maiden City, including the EA Sports Cup final in 2019.

Derry City did record a ‘home’ win over Dundalk during the 2017 campaign but that game was played in Buncrana.  The last fixture between the two teams at the venue ended in a 1-1 draw in April when David McMillan put Dundalk in front only for Cameron McJannett to bag an equaliser for the hosts.

Vinny Perth’s men currently occupy seventh place in the table, four points behind the Candystripes, albeit with two games in hand, and a further seven adrift of third-placed Sligo Rovers.

A top-three finish would guarantee European football in 2022 and with domestic matters now the sole priority following Thursday’s Europa Conference exit to Vitesse Arnhem, Perth believes his players are capable of finishing the campaign with a flourish.

“I think qualifying for Europe is really achievable,” he said. “We need a few things to go our way but I think we can do it and it’s up to myself and the players to lead the club back into Europe again.

“It’s going to be a real challenge for us on Sunday,” he added. “Derry City are obviously a lot fresher than we are so we will have to be at our best but it’s a challenge we are all looking forward to.” 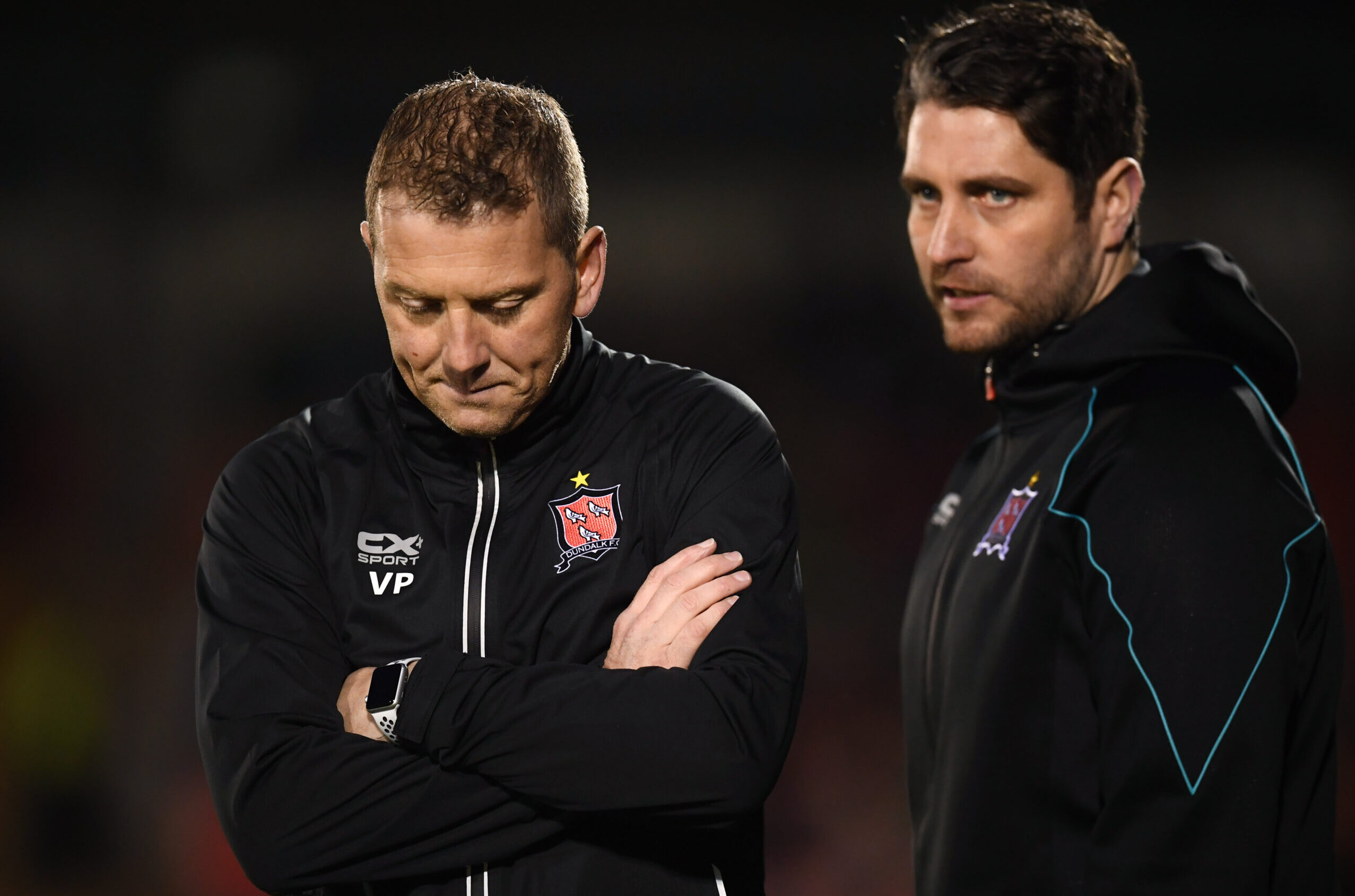 Vinny Perth and Ruaidhri Higgins, pictured during the 2019 President’s Cup final at Turners Cross in Cork. Photo by Stephen McCarthy/Sportsfile

Perth will once again come head-to-head with his old assistant manager, Ruaidhri Higgins, and he was full of praise for the job the Limavady man has done since taking over the reins from Declan Devine in April.

After slipping to a 4-2 loss at home to Shamrock Rovers in mid-July, Derry have strung together a three-game unbeaten run. In their last league outing on August 6th, they beat Drogheda United 3-0 with new arrival Jamie McGonigle amongst the scorers.

“I know all about Ruaidhri’s strengths from his time here at Dundalk in 2019,” said Perth. “What we achieved together that season is something I will never ever forget so I am looking forward to going up against him once more.”

Team News
Daniel Cleary is fit again after recovering from a serious hip injury that kept him out for three months. “Dan is almost there,” said Vinny Perth. “We have a lot of sore bodies and Dan will likely be part of the squad. We trained on Saturday morning so we will assess things after that and see what way we are fixed.”

Supporter Information
Dundalk FC supporters are being urged not to travel to Sunday’s SSE Airtricity League Premier Division fixture with Derry City at the Ryan McBride Brandywell, as they will not gain entry to the ground. The match will be streamed live on LOITV.ie. A match pass costs just €5. Live commentary will also be available on the LMFM website and app.

Will Patching Quotes
“It’s a massive game and it’s about picking up as many points as possible and trying to finish in a European spot. We’re four points behind Derry City now but I think we have two games in hand and we are totally focused on Sunday.”