Dundalk will be hoping to pick up their first win of the season when they visit the Ryan McBride Brandywell Stadium to take on Derry City on Tuesday evening at 7.45pm.

Lilywhites sporting director Jim Magilton, along with academy manager Stephen McDonnell, and coach Giuseppe Rossi, took training on Monday morning following the departure of Filippo Giovagnoli and Shane Keegan over the weekend and speaking to dundalkfc.com, McDonnell said that they were happy with the players’ response.

“A lot has happened over the past few days but now it’s a matter of refocussing the players and in fairness to them, they already have an understanding of what we are looking for. The session today was good, it was loud and there was plenty of energy which was a good thing to see. We’ve planted seeds about how we want them to go about things and that’s important.”

Dundalk ended their three-match losing streak on Saturday with a 1-1 draw at home to St Patrick’s Athletic. Junior Ogedi-Uzokwe came off the bench to equalise with five minutes remaining after Pat’s took the lead early in the second half through Sam Bone.

The Candystripes have also endured a rough start to the 2021 SSE Airtricity League Premier Division season. After beginning their season with three straight losses to Longford Town, Waterford and St Patrick’s Athletic respectively, Declan Devine’s men gained their first point of the campaign with a 1-1 draw at home to Drogheda United on Friday night.

“Declan was here for our game with St Patrick’s Athletic on Saturday and I think he would have seen us really put it up to them in the last 20 minutes,” said McDonnell. “We heavily outweighed Pat’s in terms of goalscoring opportunities and we’ll be prepared for the game.

“It’s always tough up in Derry and they have a lot of local lads involved who are passionate and proud to play for Derry but we’re confident of getting a result.” 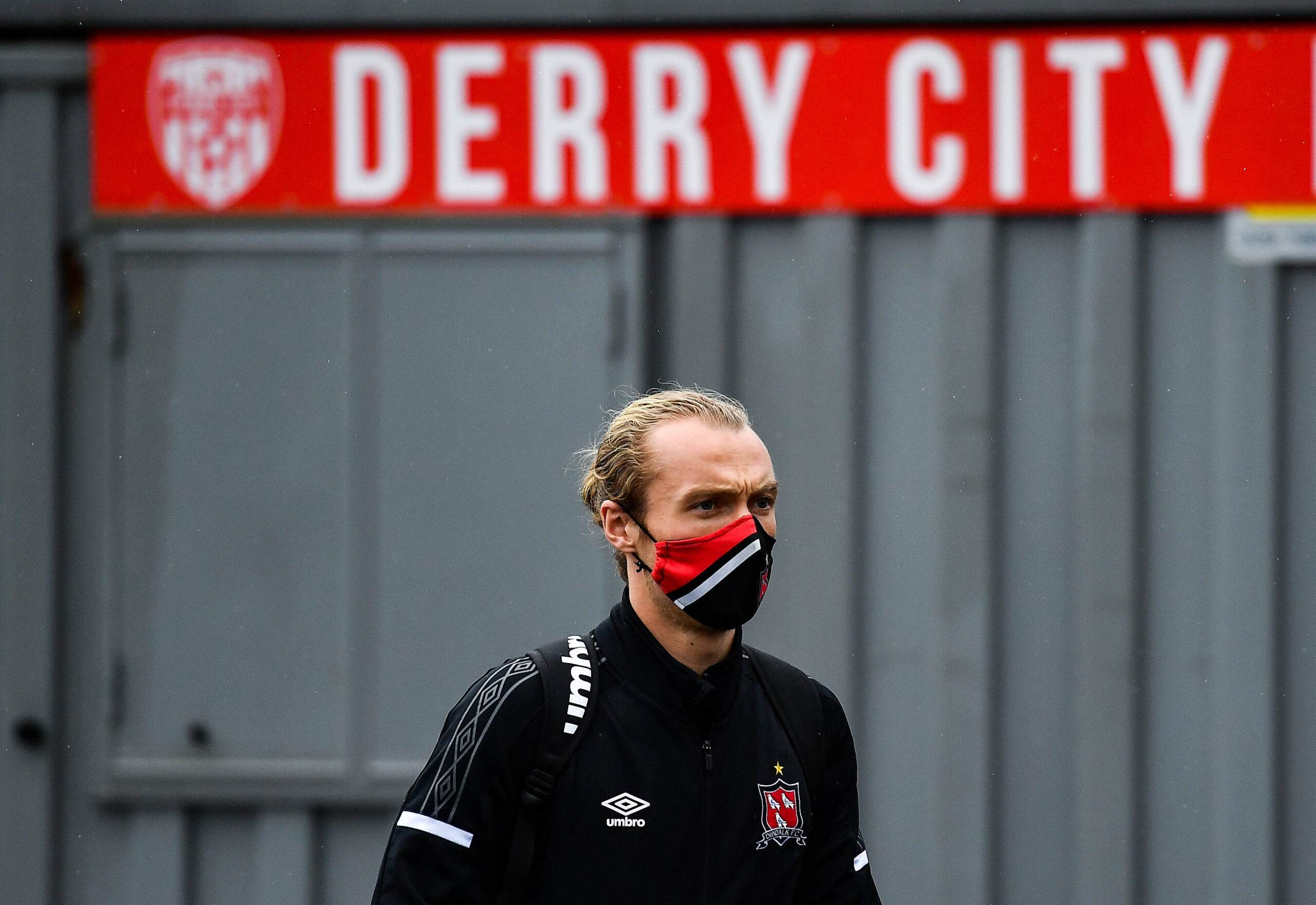 Greg Sloggett arrives at the Ryan McBride Brandywell Stadium in Derry before Dundalk’s game with Derry City in 2020. Photo by Harry Murphy/Sportsfile

Team News
Ole Erik Midtskogen is available after coming off against St Patrick’s Athletic with a bloody nose while new signing Wilfried Zahibo, who was an unused substitute, is also in the squad. Sonni Nattestad is pushing to be involved after missing out on Saturday but Brian Gartland and Daniel Kelly are ruled out with knee injuries.