Peter Cherrie insists that Dundalk will be doing everything in their power to take the race for fourth place to the final day of the SSE Airtricity League Premier Division season.

Thursday night’s Louth Derby win over Drogheda United, coupled with Derry City’s 1-1 draw with Finn Harps 24 hours later, means that Dundalk can move level on points with the Candystripes if they can beat Longford Town at Oriel Park on Sunday evening.

Bohemians, who entertain Drogheda United at 5pm on Sunday, are also in the hunt for a top-four finish but Cherrie said he was only concerned about what Dundalk did and that means picking up three points against a relegated Longford side who have won one and drawn two of their three previous meetings with the Lilywhites this season.

“We have two massive home games left now and we need to keep our foot on the pedal,” said Cherrie. “We’re hoping that there’s something on the line when Derry come here on the final day of the season but we have to beat Longford first to make sure of that.

“We have a great record at Oriel Park and that’s no surprise with the fans we have. They mean everything. I don’t think I’ve heard them stop singing since they’ve been allowed back in. They just keep going and going and get behind the team which is incredible.

“We’ll definitely need them behind us on Sunday again because this is a game that is far from handy. We need to go in all guns blazing because Longford will come up here thinking they can get something from us again.

“As you can see with the way the league is this year, every team is capable of turning anyone over. We have to go in focused and if we want something to play for on the final night of the season, we have to make sure it’s full steam ahead on Sunday.”

Cherrie had a relatively quiet night at Head In The Game Park on Thursday night with the only goal of the game coming from the unlikely source of Daniel Cleary!

“I watched the game back when I got home afterwards and we had a really good spell in the second half where we penned Drogheda in,” said the Scottish goalkeeper.

“We had four or five corners and they were clearing things off their line so there was definitely a feeling that the goal was coming but I don’t think anyone would have thought it was Dan who was going to get it!

“It could have been one of those games that just petered out but they kept going and got the late goal and you can see what it meant to the fans. There was a picture on the club’s social media pages of the celebrations that followed Dan’s goal and I think it captures everything, the passion from the crowd and exactly what it meant to the boys.” 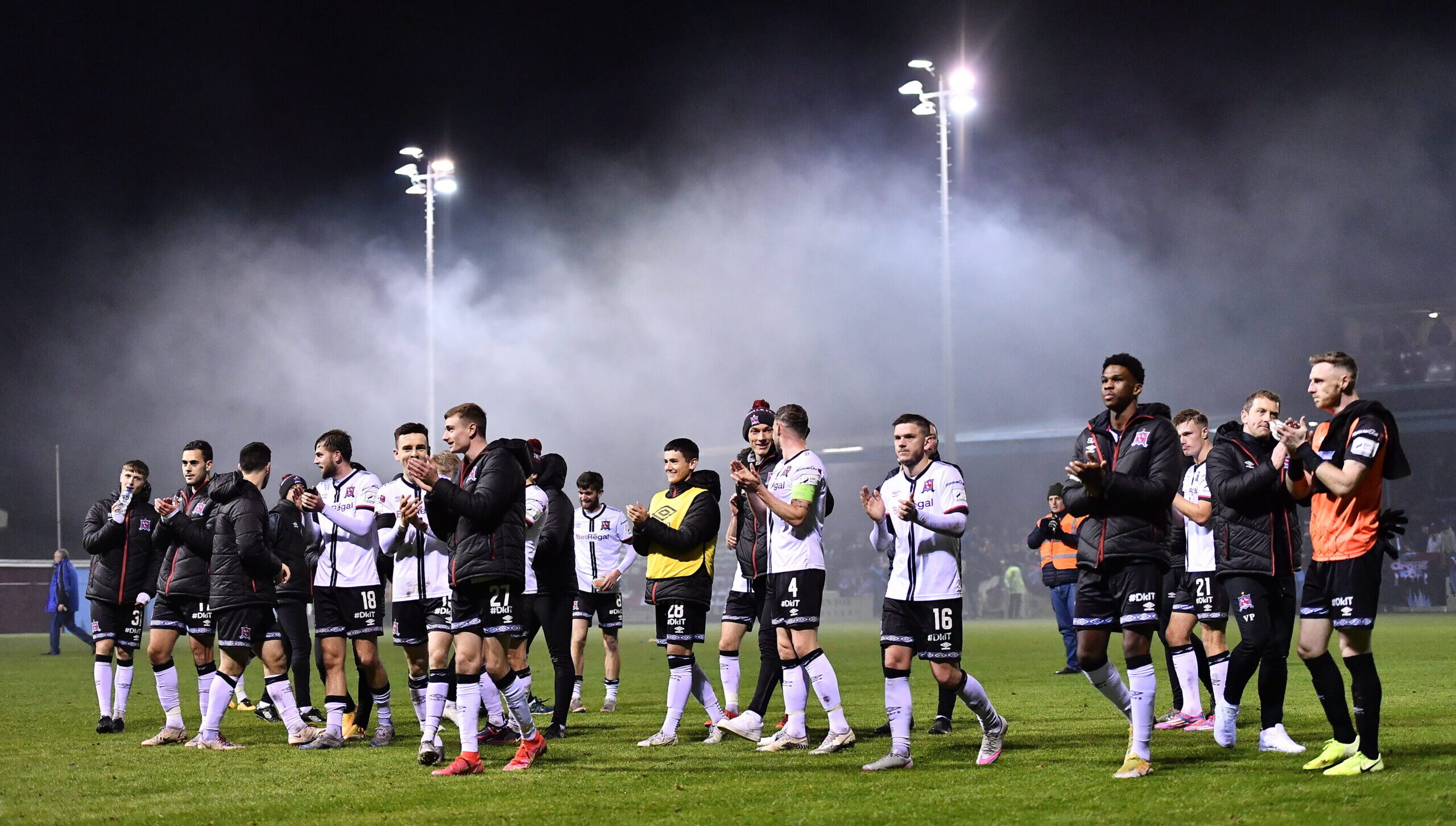 4 November 2021; Dundalk players applaud towards supporters during the SSE Airtricity League Premier Division match between Drogheda United and Dundalk at Head in the Game Park in Drogheda, Louth. Photo by Ben McShane/Sportsfile

Vinny Perth Quotes
“The game kicks off at 5pm on a Sunday and I really hope our fans can get behind the team again as they have done over the past few months.
“I think it’s important that we all stick together. There is no doubt that changes are on the way but what they are, I don’t know. I just hope that the club makes the right decisions, learns from the mistakes of the past, and fixes this great club going into next season.
“For me and the players, our job is to finish the season on a high. If this is our last couple of games as a group, then it’s up to us to leave the club in the best possible position, whether that be fourth, fifth or sixth, and that is our goal.”

Team News
Greg Sloggett is touch and go after missing the derby win over Drogheda United with a back injury while Raivis Jurkovskis is still unavailable due to a family bereavement. Brian Gartland, Patrick McEleney and Wilfried Zahibo are still sidelined.

Previous Meetings
Despite being relegated, Longford Town are the only team in the Premier Division that Dundalk have failed to beat this season.

The opening fixture at Bishopsgate in May ended in a 2-2 draw when goals from Junior Ogedi-Uzokwe and the now-departed Chris Shields rescued Dundalk a point.

The second meeting at Oriel Park also ended all square. The visitors took the lead through Aaron McNally but Shields equalised before Lee Stacey saved Patrick Hoban’s second-half penalty in Vinny Perth’s first game back in charge of Dundalk.

The Midlanders won the meeting between the clubs at Bishopsgate in early September thanks to an Aaron O’Driscoll goal. Longford ended the game with nine men while Han Jeongwoo was also dismissed late on.

Ticket News
Tickets are available online and⁣ will also be available at the ground before kickoff.⁣