After playing out a 3-3 draw in their very first encounter back in September 1926, Dundalk and Shamrock Rovers will do battle for the 365th time when they meet at Oriel Park on Friday night.

Friday night’s game, which will be televised on RTE2, is the only SSE Airtricity League Premier Division fixture of the night. A win for Dundalk would move the Lilywhites into sixth place with just six league games remaining.

Previous Meetings
This is the fourth, and final, league meeting between the sides this season – and the fifth overall.

In March, Alessio Abibi was the hero as the Lilywhites won the FAI President’s Cup at Tallaght Stadium. After a 1-1 draw in 90 minutes, where Sonni Nattestad scored his first and only goal for the club to date, Dundalk emerged as 4-3 winners in a penalty shootout.

The sides met again at Tallaght Stadium less than a month later with goals from Danny Mandroiu and Dylan Watts securing Rovers a 2-1 victory in the first league meeting of the season. Patrick Hoban was on target for the visitors.

Oriel Park played host to the second league meeting in May and the hosts took all three points as goals from Patrick McEleney and Daniel Kelly, either side of Joey O’Brien’s equaliser, secured Dundalk the win.

The last meeting between the sides took place in Tallaght in July, when Patrick Hoban’s opener was cancelled out by goals from Liam Scales, Sean Gannon and Aaron Greene as Rovers recorded a 3–1 win.

Form Guide
The Lilywhites go into the match on the back of a five-game unbeaten run in all competitions and win would see Vinny Perth’s side rise to sixth in the table.

After just one defeat in their last five league games, Shamrock Rovers sit nine points clear at the top of the table with a game in hand over second-placed St Patrick’s Athletic.

After defeat away to Finn Harps at the start of September, they’ve since gone on a four-game winning run, including victories over each of the three sides in the European spots below them.

Team News
Raivis Jurkovskis and Sonni Nattestad are on international duty while Patrick McEleney, Brian Gartland, Daniel Kelly, David McMillan and Wilfried Zahibo are all injured. Will Patching is doubtful after limping off in the 2-2 draw with Finn Harps in Ballybofey last Friday. 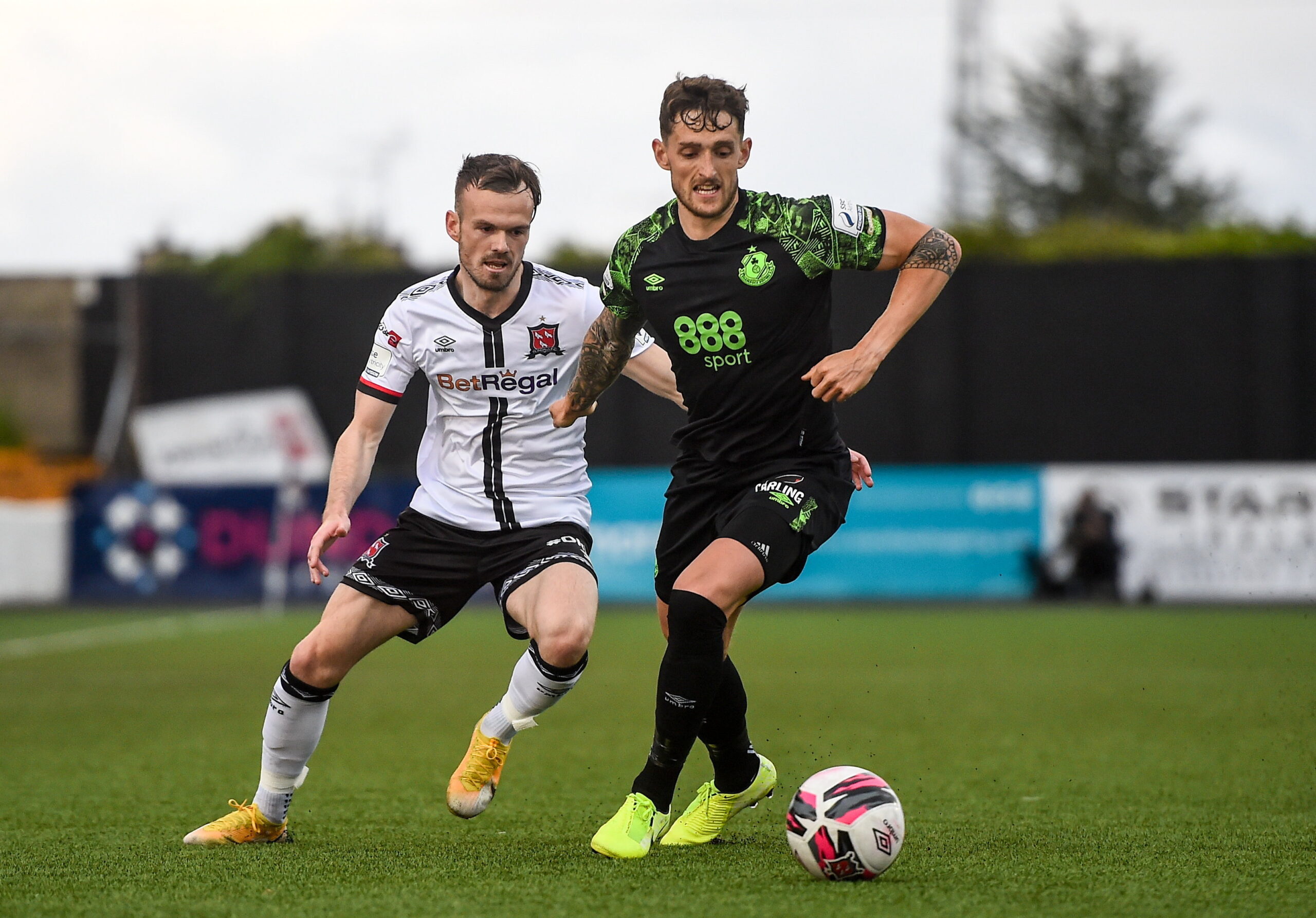 Lee Grace of Shamrock Rovers and Cameron Dummigan of Dundalk during the SSE Airtricity League Premier Division match at Oriel Park in May. Photo by Ben McShane/Sportsfile

Vinny Perth Quotes
“Stephen Bradley and his staff deserve real credit for the way they have managed their group this year. They have spent heavily and brought in a lot of top players but they have also had to manage those players, which they’ve done really well.

“There is no doubt that the Rovers squad is far superior to ours at the moment but benches win games of football and when we have our best players available, we are as good as anybody in the league.

“The crowd have played a huge part in our last three games at Oriel Park and we’re going to need that again on Friday night. It’s been great for the players but I think the fans have really enjoyed being back at matches. The last 18 months have been very difficult for everyone in the country and what else would you rather be doing on a Friday night than supporting your local team?”

Match Sponsors
Friday night’s game is kindly sponsored by Macfar Property Management. Based in Park Street, Dundalk, Macfar specialises in the management and maintenance of residential and commercial property in the North East region. For more information, list their website at www.macfar.ie

Ticket News
A limited number of tickets are still available from the ticket office at Oriel Park, which is open from 10am-5pm on Friday. Tickets will not be available online or from the ground before kickoff.

Food and Beverages
The Lilywhite Lounge and Enda McGuill Suite will both reopen their doors ahead of this Friday’s SSE Airtricity League Premier Division game with Shamrock Rovers at Oriel Park.

Supporters must show proof that they are fully vaccinated or have recovered from COVID-19 in the past six months to gain entry to both bars. Children under the age of do not need proof of vaccination or recovery.

⁣Tea, coffee, beverages, hot food, ice cream and a variety of snacks will be available inside the ground from our official club partners RockSalt and XXI Ice.

Live Stream
As the game will be broadcast live on RTE2, supporters are advised that there will be no live stream of the game.