All eyes will be on Tallaght Stadium on Sunday evening when Dundalk make the trip to South County Dublin looking to ramp up the pressure on reigning champions and SSE Airtricity League leaders Shamrock Rovers.

Rovers go into the game sitting top of the table with 53 points from 25 games while Dundalk sit four behind on 49 – with an extra game played. Derry City, who drew 1-1 with Drogheda United on Friday night, occupy third position, on 46 points with 26 games played.

A win would move the Lilywhites within touching distance of Rovers with the final furlong in sight and Lilywhites head coach Stephen O’Donnell, who will have to plan without the suspended Andy Boyle, said his players were hungry to make their first season together a memorable one.

“We’re not talking about long-term projects when we play every Friday,” he said. “We’re trying to grasp the moment in every game. It’s the here and now. We never bring in further down the line, it’s about the game in front of us. There are three points on offer and there’s a game to be won and that’s the way we approach it.

“Looking at the bigger picture probably comes during the week and at the end of the season when you think about what trajectory you’re on but when the game’s come around, it’s all about what’s happening on the pitch and how you react to it.

“The players have been brilliant from day one and to get themselves into such a good position at the latter end of the league speaks volumes for their attitude and quality,” he added.

“They’ve been so receptive to what we want to try and do and they’ve really bought into it as a group and individuals. I can’t speak highly enough of them and tomorrow’s game is another step. 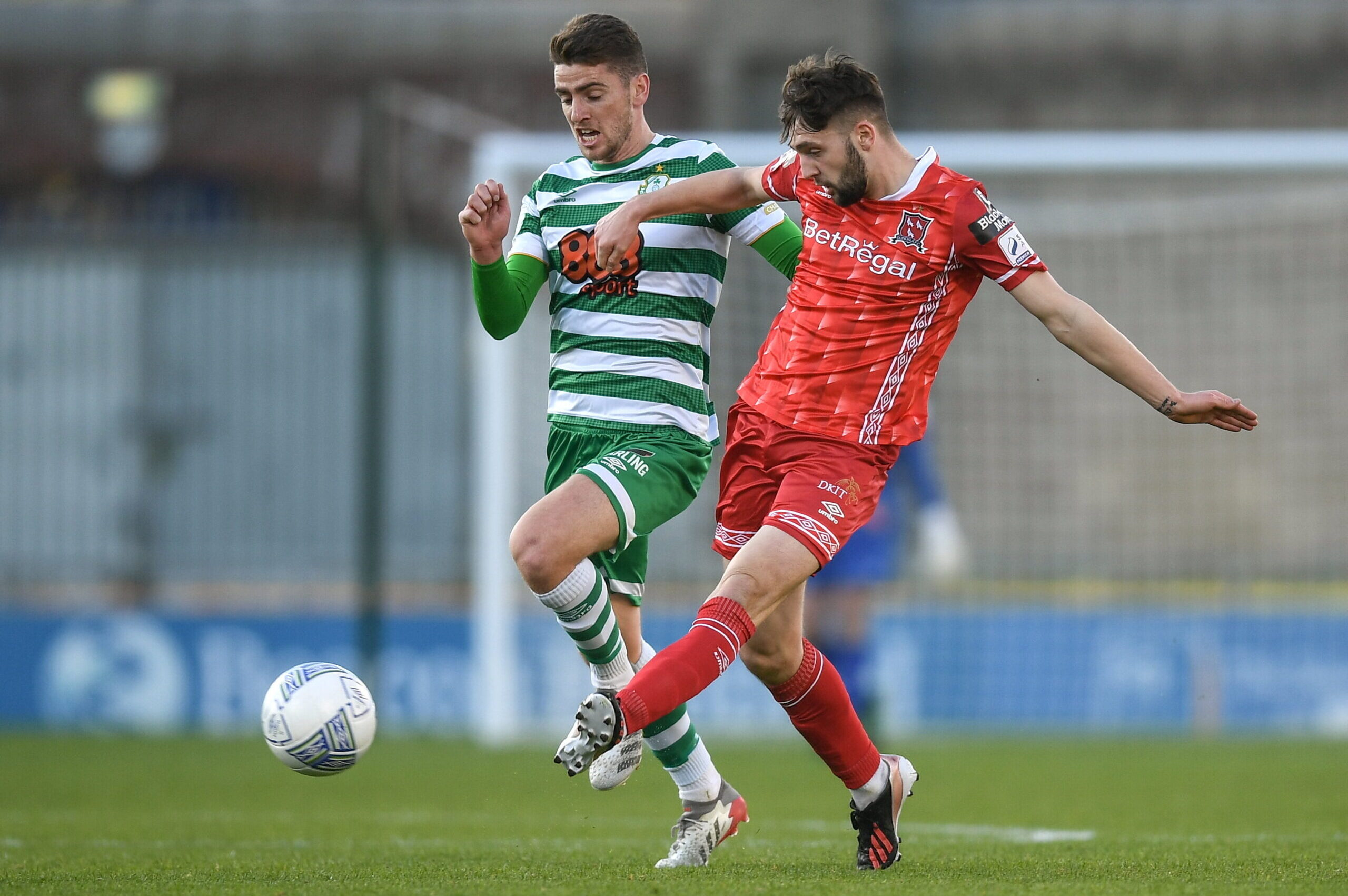 Joe Adams of Dundalk in action against Dylan Watts of Shamrock Rovers during the SSE Airtricity League Premier Division match at Tallaght Stadium in April. Photo by Eóin Noonan/Sportsfile

“Back in February, I’m sure people wouldn’t have thought this game would be happening in regard to where we’d be in the table going into the last 10 games. That’s down to the players and their quality.”

Asked what a win would mean, the former Dundalk captain replied with a smile.

“A win gets us closer to the top, simple as that. It would close the gap but it’s more about pitting your wits against a good team with good players and seeing where you’re at.

“We’re evolving and we always need to be at our max, application-wise, to be competitive in games and this is another opportunity for players to grow within themselves and for the team to grow as a team and to go and really express themselves.”

The sides have met on three occasions this season. A scoreless draw at Oriel Park in March was followed by a Rovers win in Tallaght the following month courtesy of a goal by the new departed Danny Mandroiu. Robbie Benson’s strike secured Dundalk a 1–0 win at Oriel Park in the third series of games.

Rovers go into the clash on the back of a 4-0 defeat to Ferencvaros in their UEFA Europa League playoff first-leg tie in Hungary on Thursday night but O’Donnell is expecting his counterpart Stephen Bradley to keep changes to a minimum.

“No matter what changes they make, they’ll play a strong team,” he said. “I’m pretty sure that Stephen will pick the strongest team available that he sees fit to win the game. I don’t think he’ll be taking players out and giving them a rest for this one.”