Shane Keegan is expecting a stiff test in the west on Saturday evening when Dundalk begin their 2021 SSE Airtricity League campaign against Sligo Rovers at The Showgrounds.

After a poor start to last season, Liam Buckley’s side flourished when the league returned to action last July and a return of eight wins and a draw from their 14 games was enough to secure a fourth-place finish and a place in Europe.

Home and away victories over the Lilywhites were included in that run and the Dundalk team manager knows that the Lilywhites will have to be at their best to open the season with a positive result.

“In terms of their first 11, and the next three or four players that they can bring in, I don’t see a huge difference between what Sligo can put out, what we can put out, what Shamrock Rovers and the likes of St Patrick’s Athletic and Bohemians can put out,” said Keegan.

“They have real quality. I think they were pointless when Covid struck last March – they were bottom of the table anyway – and you were looking at them thinking that it didn’t make sense because of the quality they have.

“The surprise was their start to last season, not where they ended up. Where they ended up was where I would’ve expected them to based on the quality that they have, and they were probably kicking themselves that the season didn’t go on a bit longer because they were coming like a steam train towards the end.” 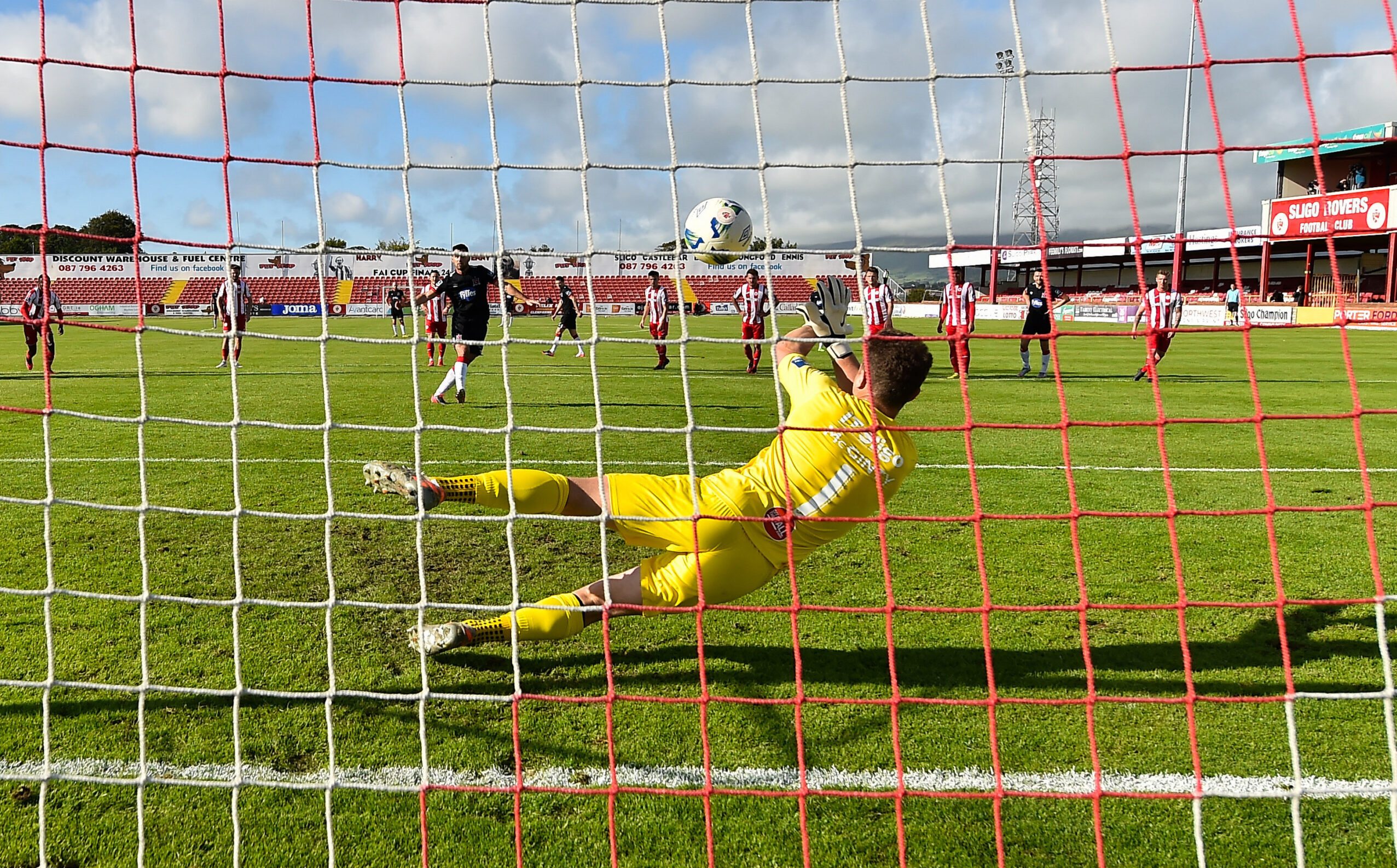 Ed McGinty of Sligo Rovers saves a penalty from Patrick Hoban during the SSE Airtricity League match at The Showgrounds in 2020. Photo by Seb Daly/Sportsfile

Buckley has bolstered his squad over the winter and while the likes of Junior Ogedi-Uzokwe and Ronan Coughlan have departed, Keegan pointed to the likes of Romeo Parkes, Greg Bolger and teenage striker Johnny Kenny as examples of the quality at the Dubliner’s disposal.

“Kenny certainly has a fair bit about him,” said Keegan. “I’d have to admit I didn’t know him before I started watching Sligo’s pre-season games but, by all accounts, he has been banging the goals in fairly regularly over there for a while and he looks like a real livewire.

“Parkes coming back is obviously a huge addition to them because you looked at the loss of Coughlan and you were thinking; for the rest of the quality, they’ve brought in, if they didn’t have that focal point at centre forward they might be in trouble so he is a big addition in that area.

“I suppose the key to them is Bolger. If you look at how good he was in previous Liam Buckley sides; if he can get the same tune out of him that he got out of him previously he could certainly be a massive addition to them this year.” 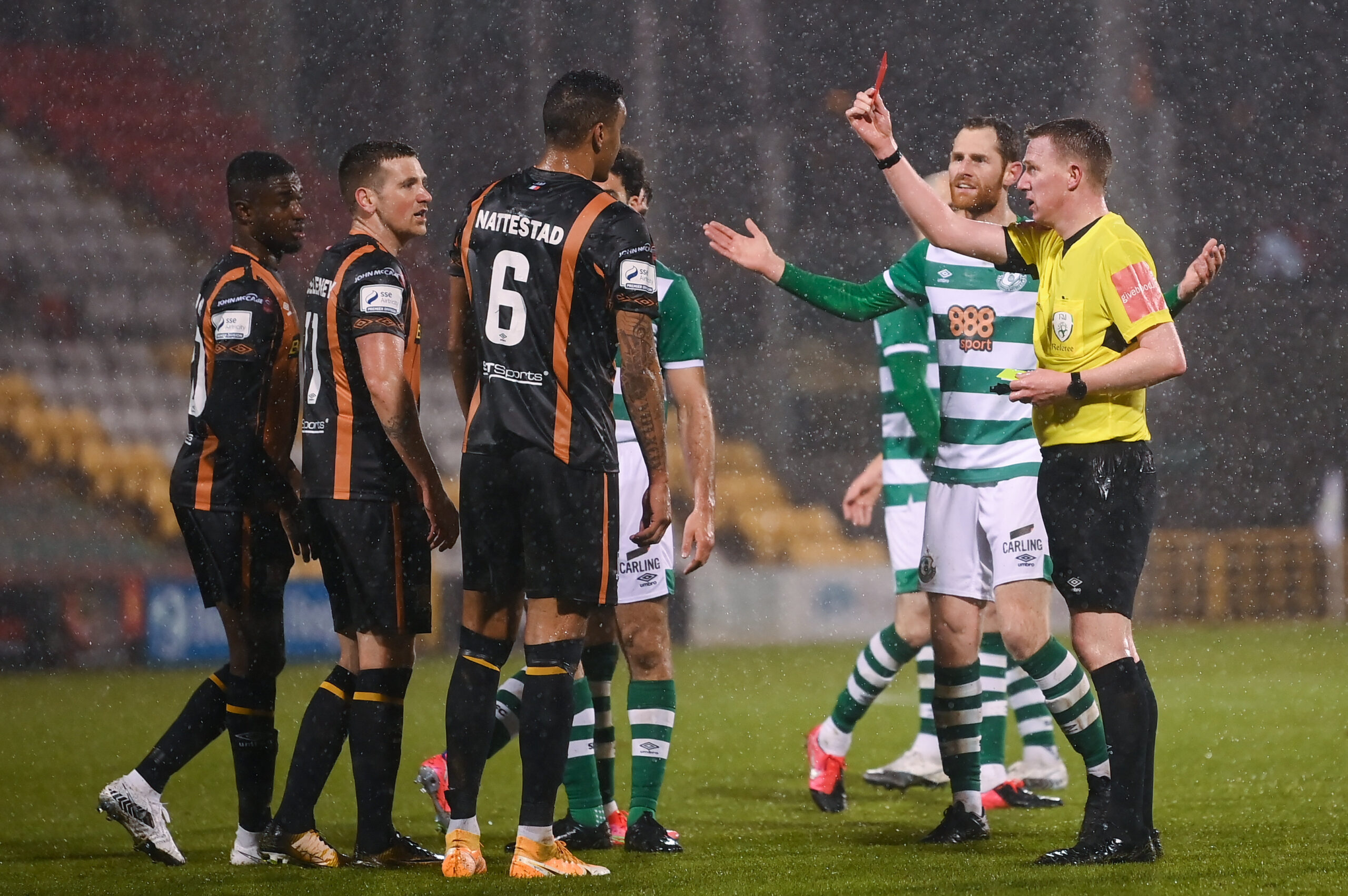 Dundalk were handed a major boost ahead of the game when it was confirmed that Sonni Nattestad, who was sent off in the FAI President’s Cup tie against Shamrock Rovers last week, is available to play.

The centre-back, who will join up with the Faroe Islands national team after the game for their upcoming World Cup Qualifiers, has played at The Showgrounds before. In 2013, he was part of the Faroes’ U21 team that was beaten 5-2 by their Republic of Ireland counterparts. Sonni’s Dundalk teammate, Sean Murray, was part of the Irish side.

Reflecting on the red card he received in Tallaght, Nattestad said he was still perplexed by referee Damien McGrath’s decision to send him off for the tackle on Graham Burke.

“I think it was a disgrace because I thought I hit the ball and everybody else seems to think so as well so I don’t know why I was sent off,” he said. “I don’t know what the referee was thinking. He was going to give me a yellow card but all of a sudden he gave me a red. I don’t know why but now it’s just time to focus on the next game.”

This is the first time in 45 years that the sides have met at The Showgrounds on the opening night of the season. On that occasion, Sligo Rovers ran out 4-2 winners and went on to win the title and Keegan said Dundalk were intent on following the same path this year.

“I think the focus is very much on regaining the league title,” he said. “We’ll obviously still be trying to do well in Europe and go on another FAI Cup run but trying to regain the league crown is the number one priority at the club.”

Ole Erik Midtskogen, Brian Gartland, Daniel Kelly and Sean Murray will all miss the game through injury but Michael Duffy is hoping to be involved after resuming training this week.