Dundalk will be looking to book a place in the quarter-finals of the Extra.ie FAI Cup for the 11th successive year when they play host to Leinster Senior League table-toppers St Mochta’s at Oriel Park on Friday night.

The Lilywhites, who are the cup holders, have also featured in every final since 2015 and are just two wins away from a record-breaking seventh successive appearance at the Aviva Stadium.

And after winning the trophy against Shamrock Rovers at an empty stadium last year, Lilwyhites winger Daniel Kelly said the players were determined to give their friends and family something to look forward to in November.

“Any cup game is always a big one because you think of the big day out in the Aviva with your family and friends,” he said. “I think last year was difficult for everyone. As much as it was an unbelievable feeling to win the cup, you’d miss the fans, the walkout and the celebrations afterwards. It was just different.

“I think the final is at the end of November and hopefully the restrictions are a bit better and there’ll be 30,000 there for it.

“We want to be there, there’s no beating around the bush, that’s our aim; be in the cup final and win it again. We’re the holders and we want to retain that and hopefully come November we’ll be there at the Aviva with everyone’s friends and family.”

It’s just over four years ago since Dundalk last met a non-league side in the competition. The Iveagh Grounds in Dublin was the venue as Stephen Kenny’s side beat Crumlin United 3-1. A year earlier, Dundalk also beat the same opposition en route to the final.

Kelly was part of the Crumlin United side that was beaten 5-0 at Oriel Park in 2016 but he dismissed any notions that Dundalk would have it easy against an experienced Mochta’s side, who won the FAI Intermediate Cup last year.

“It’ll be their cup final and they’ll be well up for it,” he said. “Brian McCarthy’s done a great job there and my brother played for them last year when they won the Intermediate Cup so I know them well.

“They have a few lads who’ve played in the League of Ireland so they’ll know what we’re about and they’ll be no pushovers. It’s a big occasion for them and their club to get to this level and play against some of the top players in the league.”

This will be the 37th time the Lilywhites have met a non-league side in the competition with Ashtownvilla, back in 1991, the only team to have caused an upset at Oriel Park. Kelly is hoping that record remains intact come full-time on Friday night.

“We’ll need to be on it to beat St Mochta’s and I just hope we’re professional about it and we do our job right to get through to the next round.” 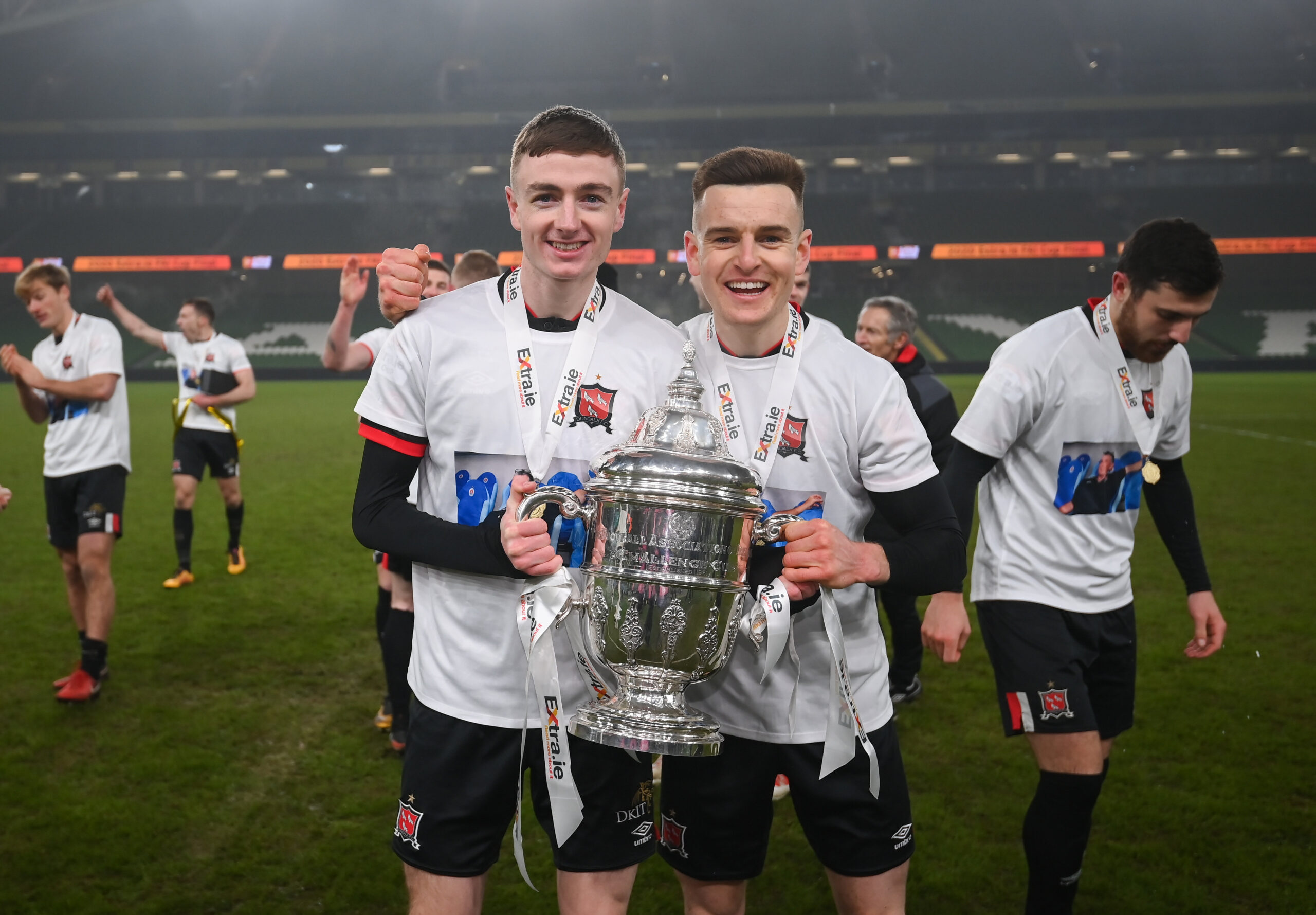 Daniel Kelly and Darragh Leahy celebrate with the Extra.ie FAI Cup after the victory over Shamrock Rovers at the Aviva Stadium in 2020. Photo by Stephen McCarthy/Sportsfile

Match Details
Competition: Extra.ie FAI Cup second round
Date: Friday, August 27th, 2021
Venue: Oriel Park
Kick-off: 7.45pm
Watch it: Live on LOITV.ie. A match pass for the game costs just €5. Please note that this game is not part of the regular subscription and must be purchased separately.
Listen: LMFM.ie

Tickets
Tickets, priced at €15 for adults and €10 for juveniles, are still available and can be purchased from the office at Oriel Park before the game.

Team News
Patrick McEleney, David McMillan, Darragh Leahy and Brian Gartland are out while there are doubts over Daniel Kelly, Daniel Cleary and Michael Duffy.

Vinny Perth Quotes
“St Mochta’s are a really strong side and their manager Brian McCarthy has done a brilliant job over the past seven or eight years building the club to where it is.
“They have a lot going on in the background with the likes of Colin Hawkins, Glen Crowe and Paul McNally, good ex-League of Ireland players, involved. They have real experience, and they have taken over the mantle of being the top Leinster Senior League club from the likes of Crumlin United over the past couple of years.”