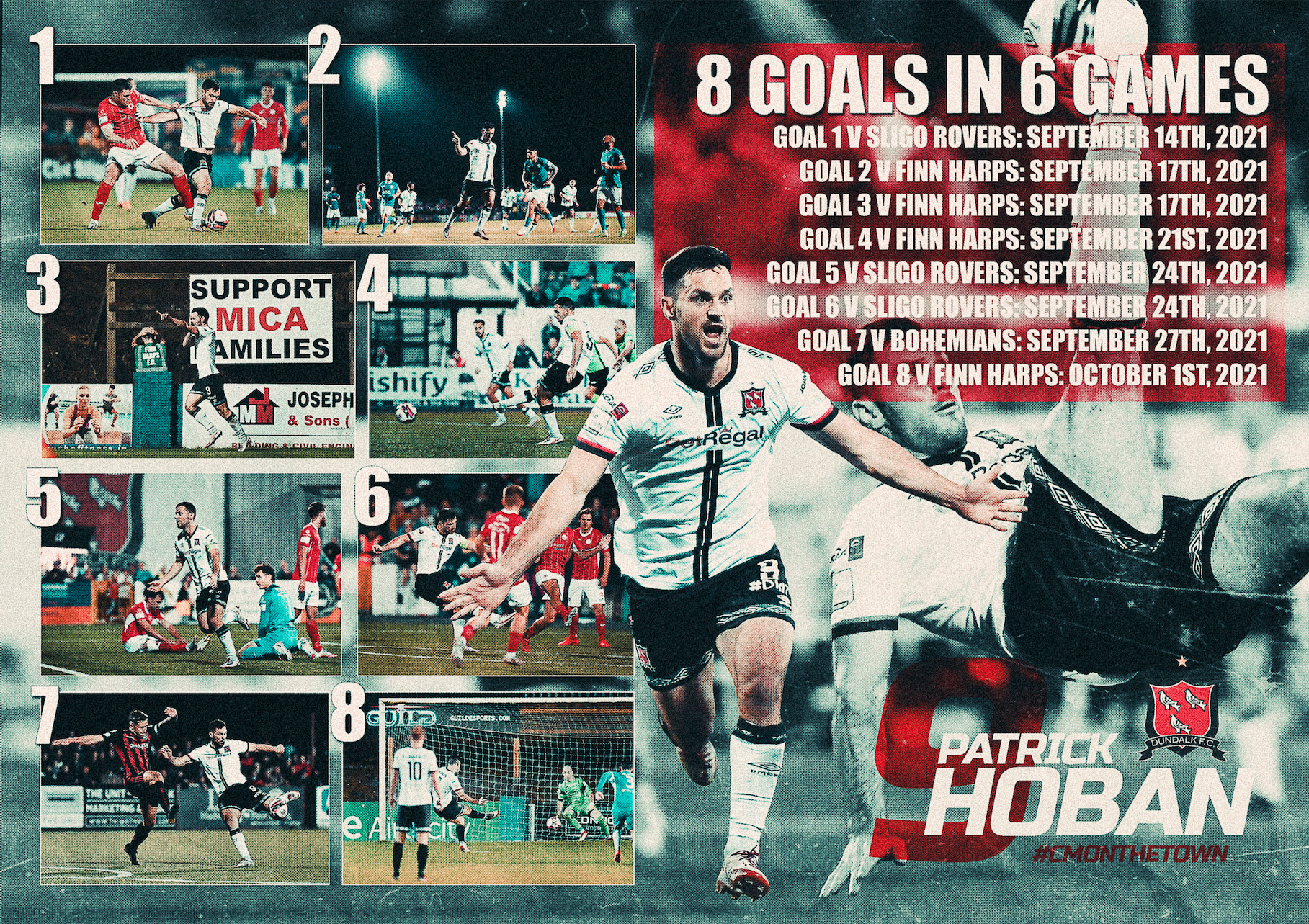 When Patrick Hoban beat Ger Doherty with a second-half penalty during the 2-2 draw with Finn Harps in Ballybofey last week, it was his 123rd goal for Dundalk, leaving him just 19 short of equalling Joey Donnelly’s record.

It also meant that Hoban became just the fifth player in the club’s history to score in six consecutive games, a feat that was first achieved in 1942/43 when Tommy Doran scored nine goals in six games.

In a 12-week spell from the end of December, Doran was at his sharpest, scoring in 10 out of 12 games. This sequence included scoring in six successive matches, highlighted by a hat-trick against his old club Bray Unknowns. His season total of 15 goals put him second on the marksman’s list to Don McDonald’s 17.

The free-scoring George Sterling was next to achieve the milestone, hitting the net in six consecutive matches during the 1945/46 season.

When the former Glentoran man went on a run, he certainly went on a run! In a campaign that saw him finish with 24 goals, he had the unusual distinction of scoring in five consecutive games on two different occasions – and followed that up by scoring in six consecutive league matches!

His first five-game burst came when a goal in a 3-2 win over Waterford on October 14th, 1945 was followed by a further six in his next four games, including a hat-trick against Cork United on November 4th, 1945.

After a barren run of one game without a goal in a 3-0 loss away to Limerick, Sterling was back on the scoring trail, scoring seven goals in his next five outings between December 2nd and December 30th, 1945.

He joined Doran in the six-shooters club with another flurry between January 13th and February 17th, 1946. Ironically, Dundalk only recorded one win in those six games, drawing four and losing one!

His final goal for the club came in a 2-2 draw with Cork United at the end of that run. On March 3rd, he was sent off for fighting with Shamrock Rovers’ Charley Byrne in an FAI Cup match and he played no further part for the Lilywhites!

It was two decades before Doran and Sterling were overtaken when Danny Hale scored in seven league games on the trot during the championship-winning season of 1966-67. In the middle of this run, Danny also scored in an FAI Cup match to stretch his run to eight-in-a-row in all competitive games. 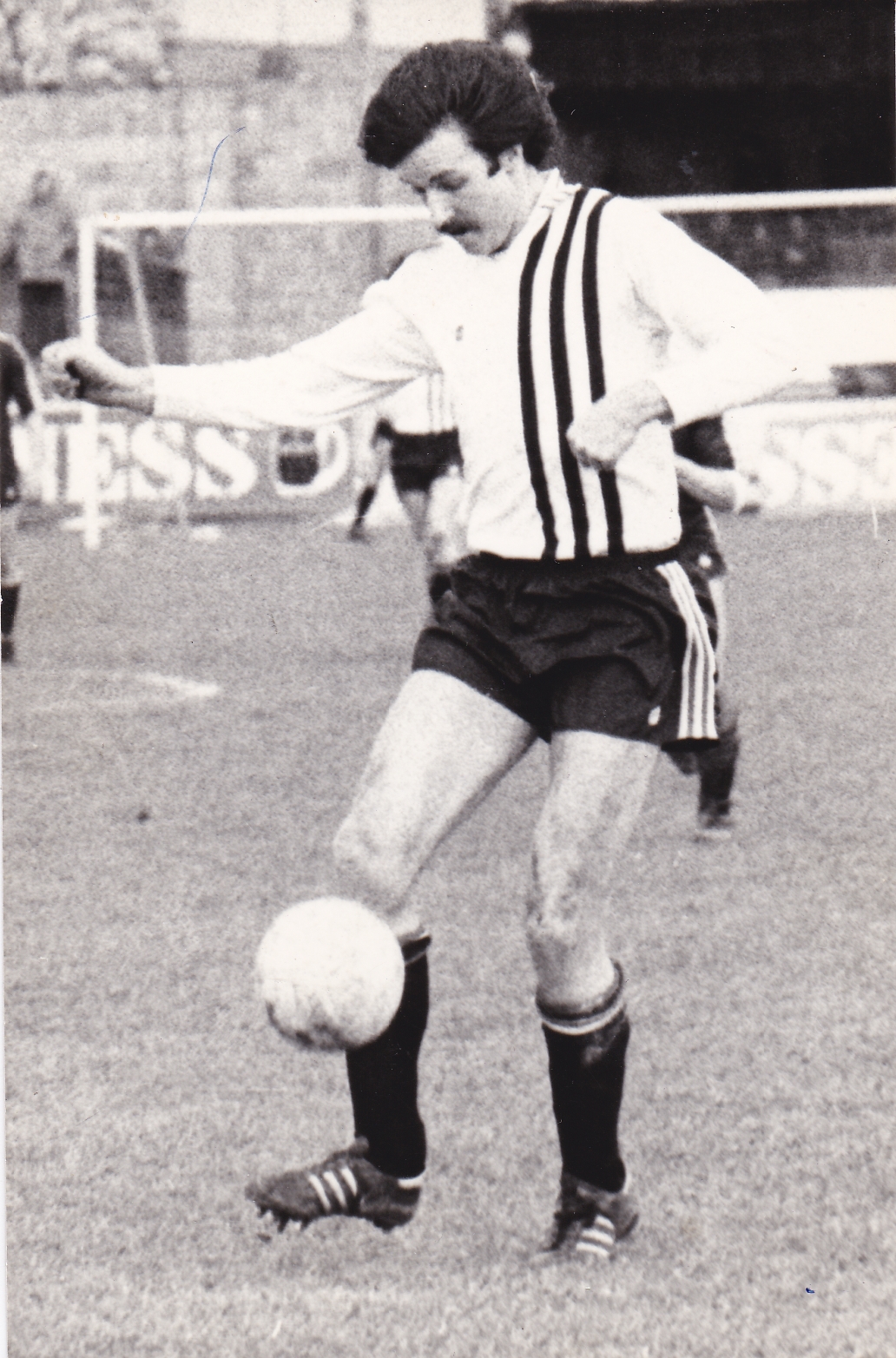 Hale, who finished the campaign with 28 goals in all competitions, 15 of them in the league, started his run with Dundalk’s only goal in a 2-1 loss away to Shamrock Rovers on New Years Day 1967 and followed it up with another in another defeat at home to Sligo Rovers a week later.

He was on the scoresheet over the next five games as Dundalk scored 22 goals and conceded just five in a four-week purple patch from January 15th to February 12th that saw them beat Limerick (3-2), Cork Celtic (4-1), Shelbourne (6-0), Drogheda United (3-1) and Tramore Athletic (6—1), the latter win coming in the FAI Cup.

His eighth goal in as many games arrived in a 2-2 draw with St Patrick’s Athletic before the run came to an end in a 3-0 defeat to Bohemians on February 26th. He was back on the goal trail the following week, however, scoring in a 1-1 draw with Cork Athletic in the FAI Cup.

Cathal Muckian equalled Danny’s run of scoring in seven consecutive league games on the spin in the double-winning season of 1978/79.

Muckian’s feat was made even more impressive by the fact that each of his goals came during a seven-game winning run that helped Jim McLaughlin’s side to the league title.

When Shamrock Rovers arrived at Oriel Park on Christmas Eve in 1978, Muckian had only two league goals to his name. By January 28th, his tally had increased to nine with perhaps his most crucial coming in Dundalk’s 1-0 win away to Home Fram on January 7th, 1979.