September 18th, 2021 marks the 30th anniversary of a famous night in Dundalk FC’s European history when Ricky McEvoy secured the Lilywhites a famous draw against Kispest Honved in Budapest.

The European Cup first-round tie was played at the Bozsik Jozsef Stadion which was demolished in 2019 on what proved to be a memorable night for League of Ireland clubs.

Back home, Cork City were denied a famous UEFA Cup win over Bayern Munich at Musgrave Park as Stefan Effenbeg cancelled out Dave Barry’s opener while Dundalk secured their best away result in Europe for 23 years by drawing 1-1 in Budapest.

Playing his 17th European game, Alan O’Neill was the hero for Turlough O’Connor’s side, making a number of brilliant saves to deny a Honved team that contained six Hungarian internationals.

Turlough O’Connor named three European debutantes – McEvoy, Peter Hanrahan and Paul Brady – in his starting XI and McEvoy pounced on a poor clearance to drill the ball home from 18 yards and bag the Lilywhites a precious away goal with 27 minutes on the clock.

With James Coll and Ronnie Murphy in imperious form at the back, Dundalk stood firm but they were undone with nine minutes to go when a moment of misfortune gave Honved the equaliser. Plokai’s shot came off the crossbar and when Murphy misjudged the rebound, Negaru tapped home the equaliser. 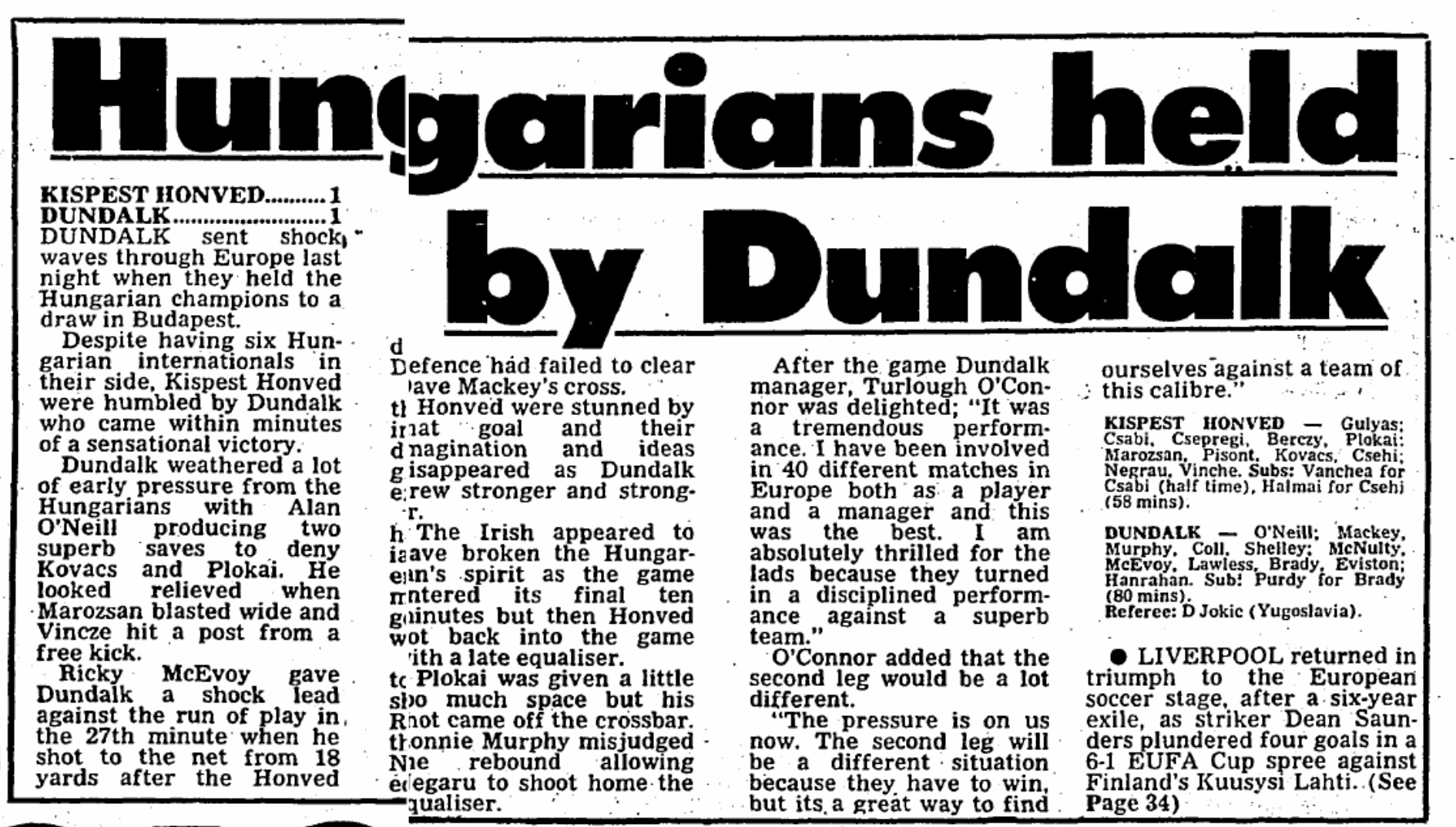 “It was a marvellous performance,” said an overjoyed O’Connor after the game. “I have been involved in 40 different matches as a player and a manager in Europe and this was the best. I’m absolutely thrilled for the lads as they put in a tremendous performance against a superb team.

“The pressure is on us now,” he added. “The second leg will be a different situation because they have to win, but it’s a great way to find ourselves against a team of this calibre.”

Unfortunately, things didn’t go as planned in the return leg in front of 5,000 people at Oriel Park as two goals from Istvan Pisont ended Dundalk’s chances of a second-round showdown with the mighty Sampdoria.