If you are a Dundalk fan, then the chances are you were probably celebrating Tom McNulty’s goal against Cork City at Turner’s Cross which saw Turlough O’Connor’s side clinch the league title. We take a look back at an incredible season.

Few would have predicted that ending after the Lilywhites made a horrific start to the campaign. After making a surprise switch to Shelbourne, Paul Newe returned to haunt Dundalk on the opening day of the season by hitting four goals in a 5-1 demolition of Turlough O’Connor’s men.

After that initial shock, Dundalk recovered and started to settle into the campaign and Peter Hanrahan scored the winner against Athlone Town at St Mel’s Park before Bohemians were dismantled 4-1 at Oriel Park.

Many people didn’t believe that Dundalk could sustain their title challenge after the departure of striker Tony Cousins to Liverpool. Cousins signed off with two goals in a 4-0 win over Limerick.

Dundalk were listless for the next two games – a 0-0 home draw with Waterford and a 2-0 defeat in Sligo – but a turning point in the season arrived on October 14th 1990 when champions St Patrick’s Athletic came to town. O’Connor moved Peter Hanrahan from his midfield position to play alongside Terry Eviston in attack and in a cracking match, Hanrahan scored twice in a 3-0 victory with full-back Dave Mackey also getting on the scoresheet with a fine free-kick. 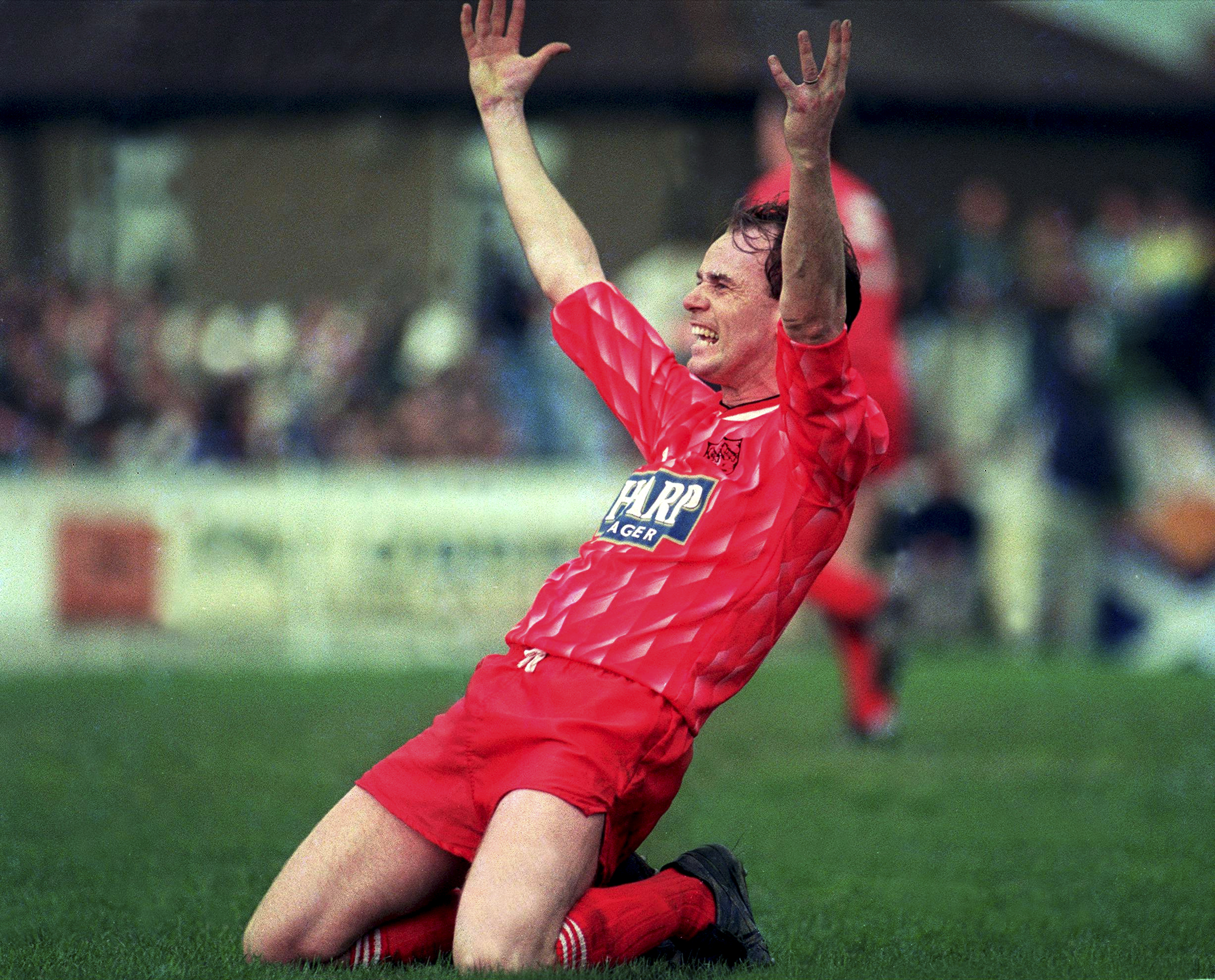 Ronnie Murphy of Dundalk celebrates at the final whistle of the Bord Gais National League Premier Division match between Cork City and Dundalk at Turners Cross in Cork. Photo by David Maher/Sportsfile

McNulty popped up with a priceless winner against Derry City at the Brandywell on October 21st to help Dundalk record a 1-0 win and by mid-November, the Lilywhites had closed to within a point of league leaders Cork City. Back to back games with the league leaders ended in two draws with John Butler rescuing a late point in Turner’s Cross after an earlier Eviston effort had given Dundalk the lead.

Dundalk’s fine form continued up to Christmas. Revenge was achieved at Tolka Park when two tremendous McNulty goals secured a 2-1 win over Shelbourne and on December 9th, 1990, Dundalk defeated Bohemians 2-0 at Dalymount Park with goals from Dave Mackey and Terry Eviston.

Things began to look ropey over the Christmas and New Year period as Dundalk lost at home to Sligo Rovers and were held by Shamrock Rovers but wins over Derry City, Athlone, Limerick and Bohs kept O’Connor’s side hot on the heels of the Leesiders.

A big crowd arrived at Oriel Park to see Hanrahan hit a brace against Shelbourne and after a 0-0 draw with fellow title-challengers St Patrick’s Athletic, Dundalk finally reached the top spot after consecutive wins over Limerick and Waterford.

A seismic FAI Cup shock followed when Sean Murphy hit an 89th-minute winner for non-league Ashtownvilla at Oriel Park and successive scoreless draws against Sligo and St Patrick’s Athletic did little to lighten the mood while also allowing Cork City the opportunity to go clear at the top of the league again. 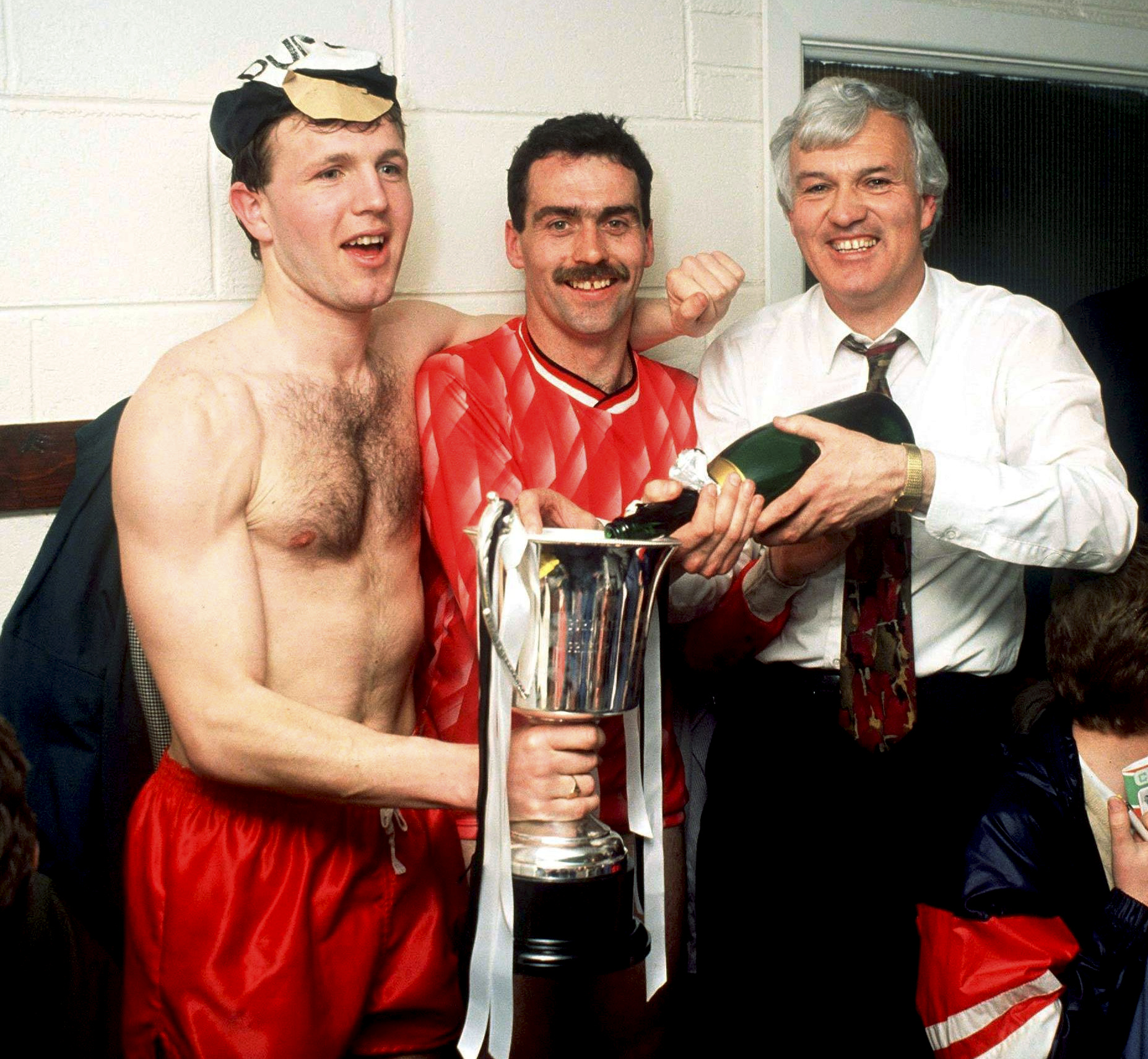 Peter Hanrahan dragged Dundalk out of their bad spell with the winner against Derry City at the Brandywell on April 1st, 1991 and this was followed by a superb 2-1 win over Shamrock Rovers at the RDS thanks to goals from Tom McNulty and Ronnie Murphy.

On April 18th, Cork City’s 0-0 draw with Shamrock Rovers at Turner’s Cross, coupled with Dundalk’s 2-0 win over Galway United, set up a final day decider. Another two goals from Hanrahan took him to 18 for the season.

A capacity crowd of 10,000 packed Turner’s Cross for the decider on April 21st, 1991. Going into the game, Dundalk enjoyed a better goal difference but it had previously been decided that in the event of a tie, a two-legged play-off would decide the title.

The game itself was far from pretty but McNulty’s 73rd-minute winner settled it, securing the club its eighth and – one of its most dramatic – league titles!

Speaking after the match, Turlough O’Connor said: “I’m glad we proved a lot of people wrong who had written us off during the campaign. We always felt that the title was there for the taking and it would go down to the last match of the season.”