If you are a Dundalk fan, then March 8th, 2002 will live long in the memory. It was the night that Martin Murray’s relegation-threatened side completely overran red-hot favourites Shamrock Rovers at Oriel Park to book their place in the FAI Cup final. To mark the 20th anniversary, we’ve managed to dig out this brilliant piece by former Dundalk Democrat sports editor Gerry Prendergast.

By Gerry Prendergast, first printed in the Dundalk Democrat in March 2002

Oriel Park last Friday night was nothing short of spectacular – spectacular crowd, spectacular atmosphere, spectacular win. In the biggest game in ten years, over 6,000 Dundalk people turned out to cheer the home side onto a marvellous victory.

The stand was beginning to fill up an hour before the game. Gardaí and the Civil Defence were on hand to check tickets and keep the rival fans apart. This all added to the excitement of the atmosphere as programme and merchandise sellers called to the loyal fans to buy their wares.

Young boys and girls skipped alongside their fathers and mothers, eager for the excitement and joy the night would hold. They were in awe of the crowds – the likes of which had rarely been seen before in Oriel during their short lives. 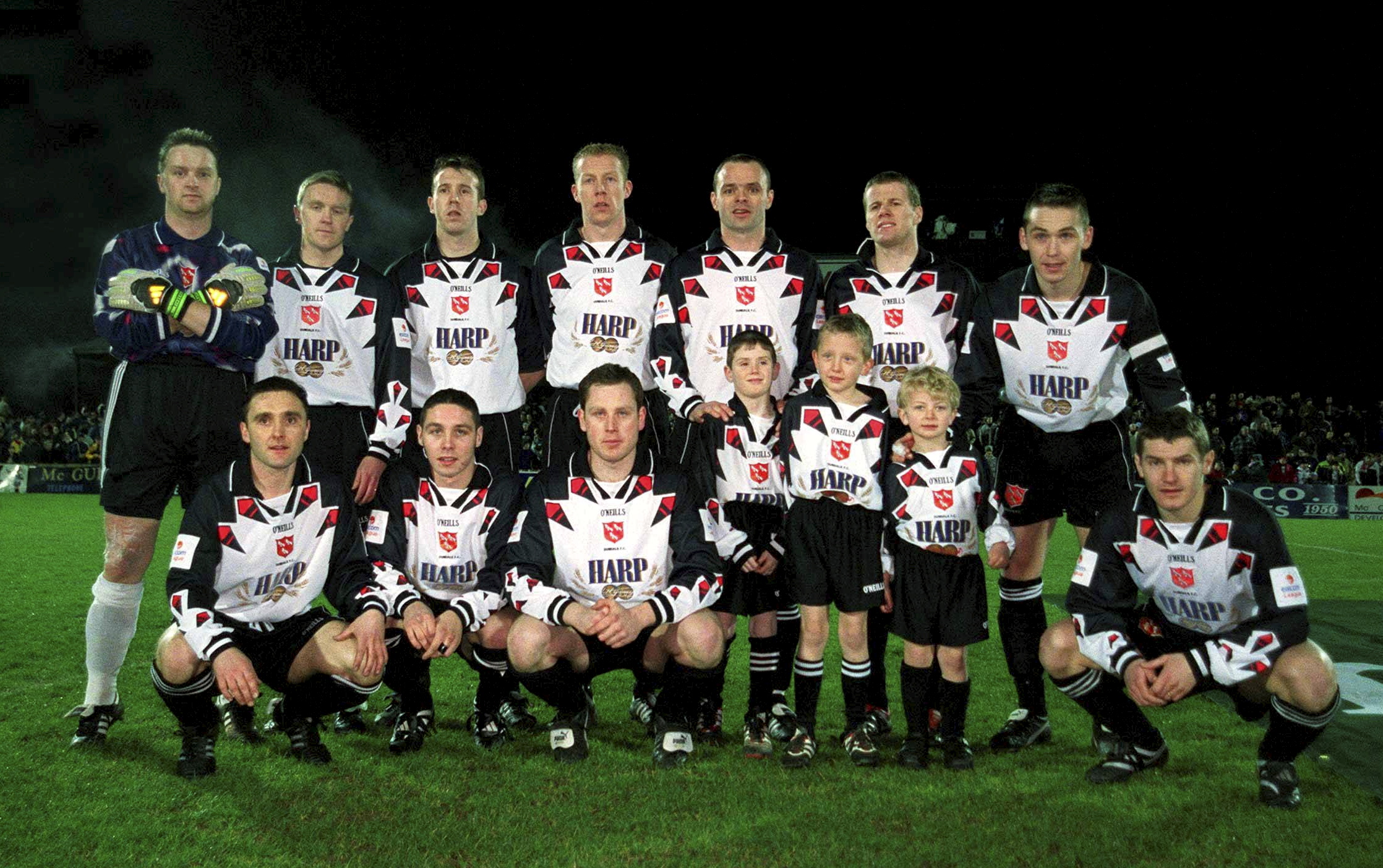 Inside the ground, old friends embraced and shook hands, many hadn’t seen  each other in a long number of years. Dundalk people came from all over Ireland and even further afield for the game that could save the club – financially as well as morally.

The players from Dundalk and Rovers were on the pitch about 45 minutes before kick-off – Dundalk in their tracksuits and Rovers decked out in their Daz-white shorts and shirts. The early Spring sun was setting away to the west, between Ardee and Carrick, illuminating the midnight blue sky with swathes of gold and amber, making it the perfect backdrop for a dramatic clash.

Solicitors joined doctors, council workers, college students and office workers as people from every walk of life in the town filtered through the turnstiles.

The Shed, famed for its attraction to die-hard fans, was silhouetted against the ever-darking night sky and only dark figures, shuffling from one foot to another, hands stuffed in pockets, could be made out. 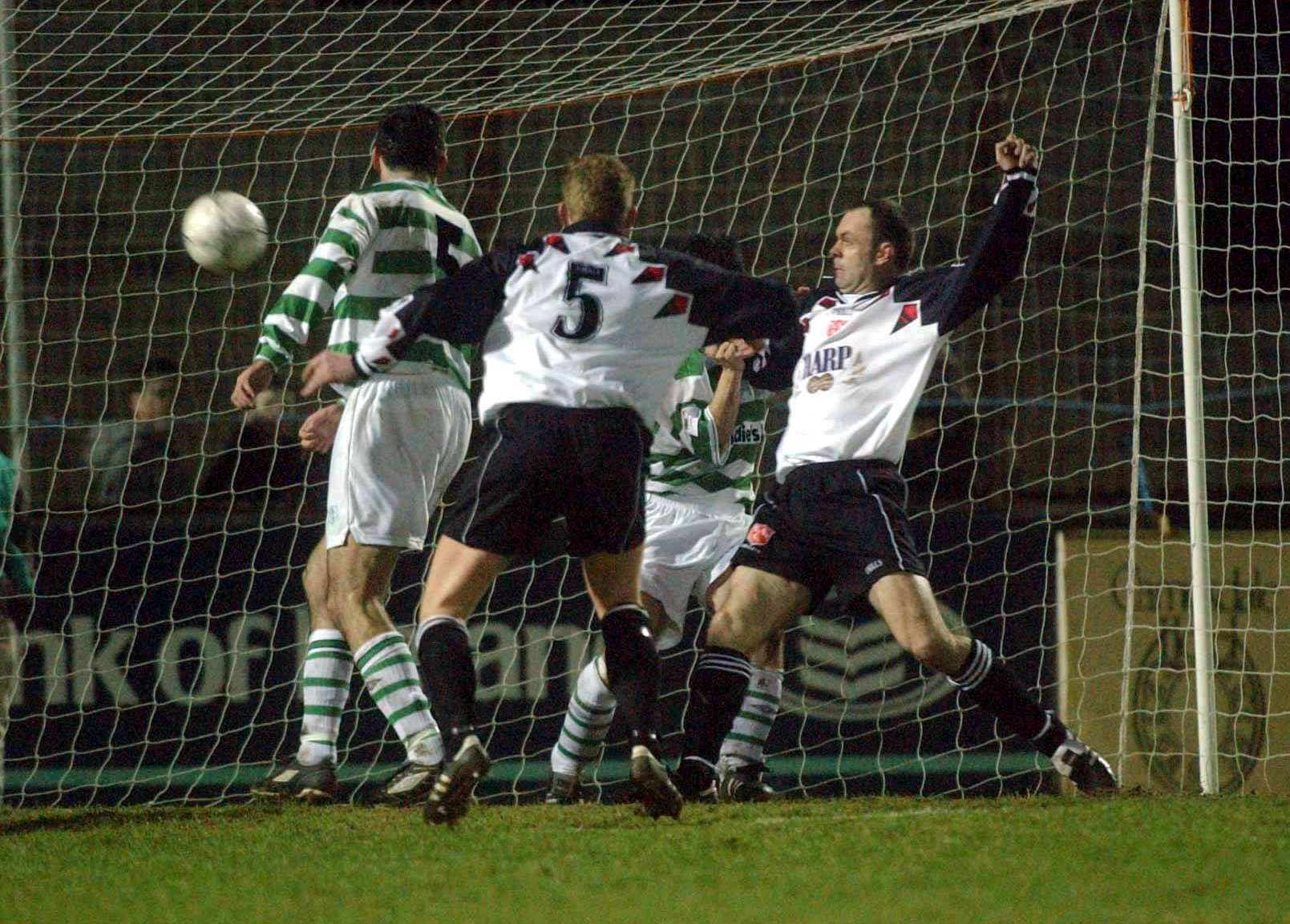 There was a deafening roar as the Dundalk team was led onto the pitch and The Shed began their football chants straight away. You could see that the local team were keyed up for this – all 11 realising what the game meant to the club and the town.

The game got underway and the Dundalk fans never let up in their encouragement for the team. Maybe this is what helped spur Garry Haylock on to score the first goal. The crowd in the stand leapt to their feet as husband turned to wife and brother turned to sister to hug one another. It was more than anyone dared hope for – to be one-nil up in the first half.

Minutes later and just a couple from half-time, Garry Haylock weaved his magic again, sending another top-drawer goal past the Rovers’ goalkeeper.

After the initial jubilation, it seemed like the fans were in shock – Dundalk FC, who are facing relegation in the league, winning in Oriel against Rovers in the Cup semi-final – they hardly dared believe it.

During the interval, many said that while they were delighted to see the team in such a strong position, they were anxious about the second half. Fans had seen the local team throw a lead like that away too many times before.

The bite of the Northerly wind did little to deter fans of all ages as the second half got underway. Dundalk just had to hang on for 45 minutes and they were on their way to Dublin for the final.

A light drizzle began to gently tumble down from a black sky 25 minutes from the end and it was around then that Rovers fans, disgusted with their team’s performance, began to throw coins at the linesmen. A row of Gardai was quickly formed and calm was restored.

You could still feel the tension and the frustration wafting on the breeze from the Rovers’ fans’ side of the stand and what few were still optimistic and chanting, were silenced by James Keddy and Martin Reilly’s goals.

The Dublin fans were sickened at the sight of their team losing to their arch-rivals, especially when they had been on course for a treble just a few short weeks ago.

Bags of newspaper, cut up into one inch squares, rained down like confetti on the Dundalk fans, courtesy of their Dublin counterparts. Nice day for a white wedding – and for once, Dundalk FC were not the bridesmaids.

“We want five, we want five”, some of the Dundalk fans started shouting. It was nail-biting stuff to the very end and the roar that was released by fans after 93 minutes of play probably could have been heard on the Ardee Road.

The Dublin journalists were in shock and for a few minutes after the end, stared at their laptops – their stunned faces reflected in the flickering screens – they hardly knew what to write.

Young fans looked to their parents and smiled – the memory of this glorious night already emblazoned forever on their memories.

After the match, everyone was smiling – there was not one sad Dundalk face to be found. “This was an unbelievable night,” said Darrell O’Kane. “I have to admit that I said before the match that we would have been lucky to get a draw. I can scarcely believe that we are going to Dublin on 7 April.” 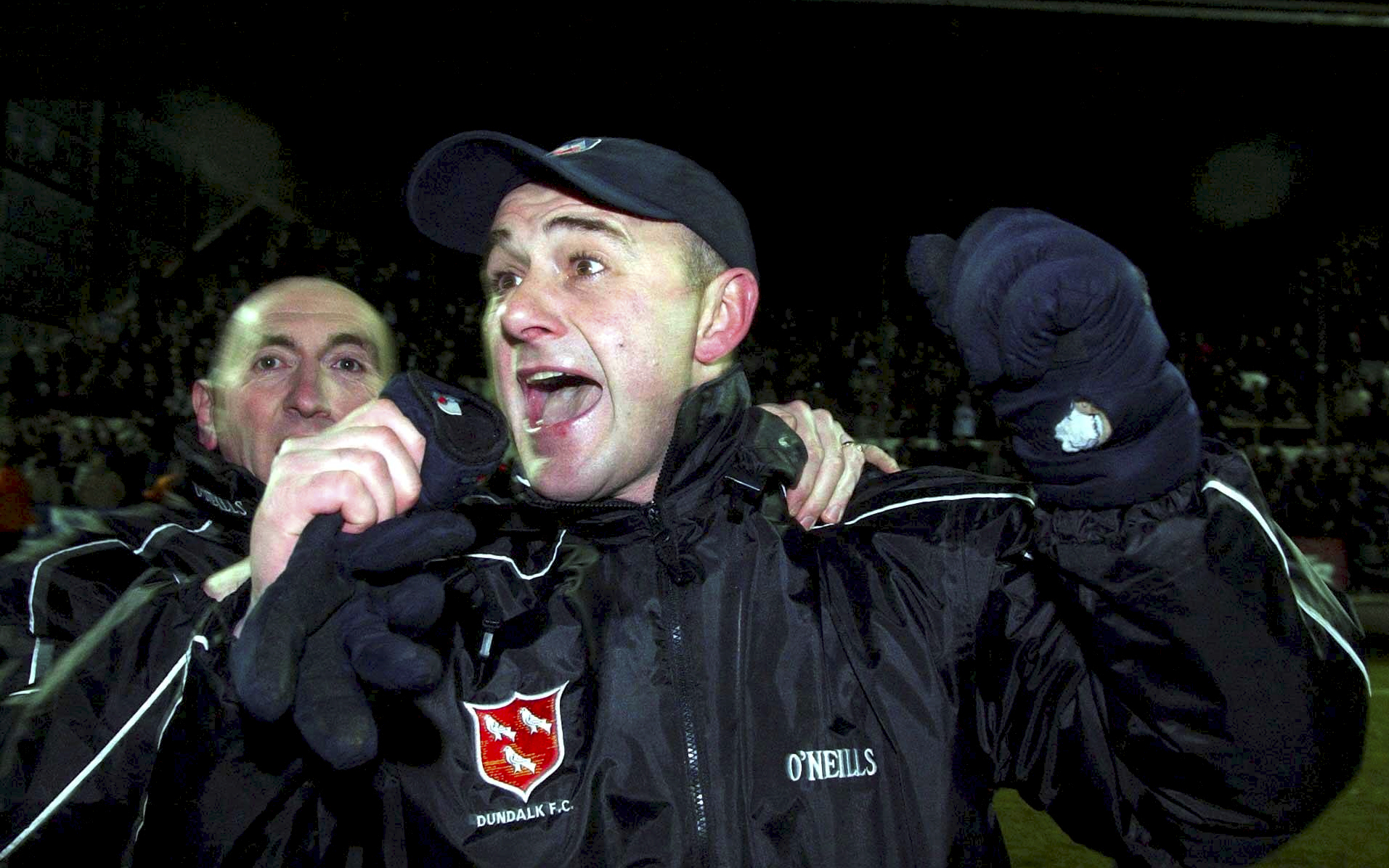 Barry Savage, Liam Rice Junior and Michael Rice were shocked and delighted in equal measure. “It was the best performance I have seen from this team, ever”, said one. “Rovers were favourites for this and I thought we could have maybe got a scoreless draw or even sneaked a late goal.

“But the 4-0 win is fantastic. The lads kept up the pace right up until the final whistle”, said another. “We’ll be on the first train to Dublin that Sunday – we might even be driving it!”

Two female season ticket holders could hardly contain their excitement. Darina Loughran from the Avenue Road and Margaret Callan, Bay Estate, have been coming to Oriel for a long number of years and can hardly remember a better atmosphere.

“The team were great once they got going and after the first goal, they seemed to settle down,” said Darina. “We are definitely going to the final in Dublin. “Garry Haylock is very talented and it was great to see so many people, of all ages, come to the game,” said Margaret. 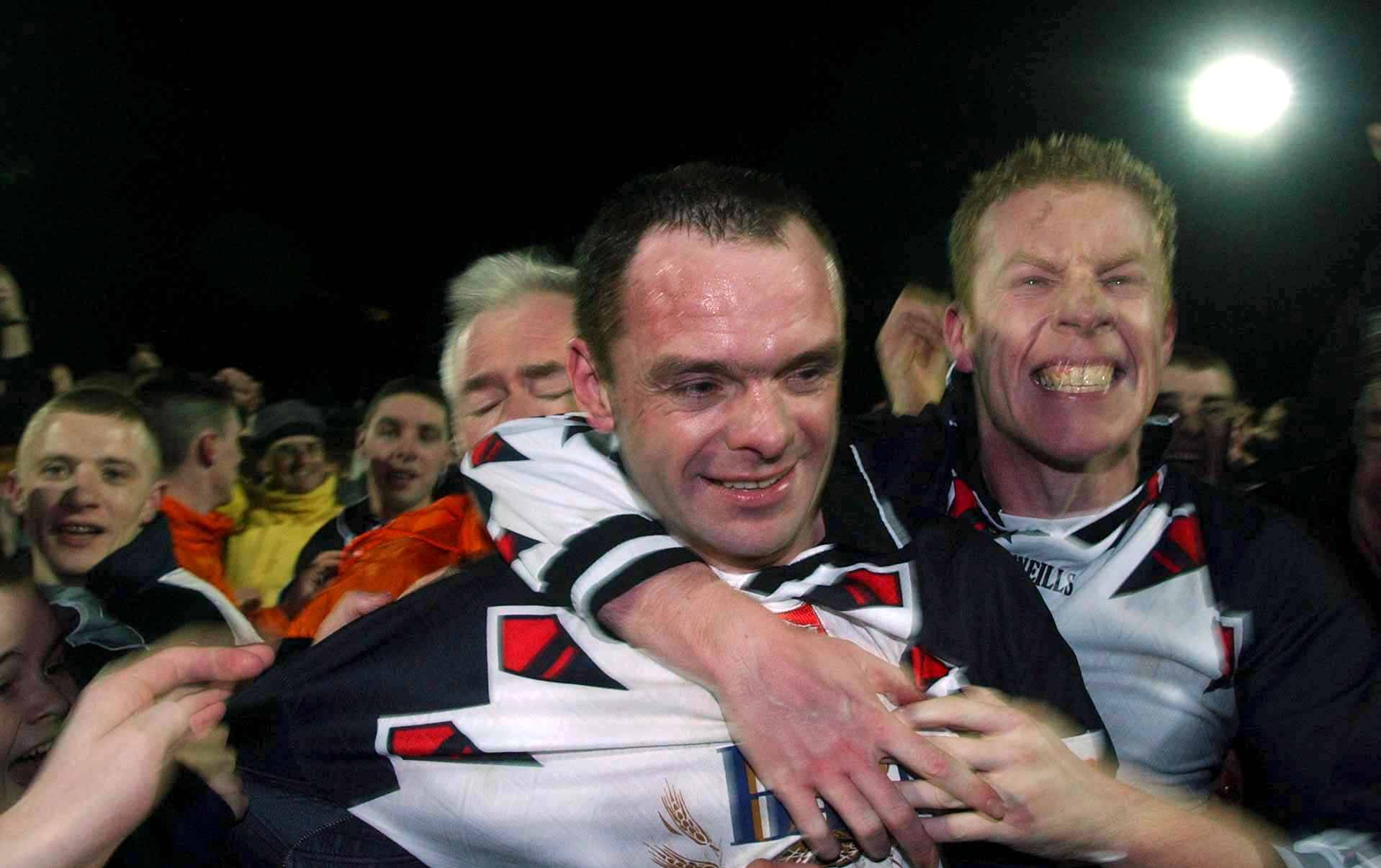 As celebrations got underway at the bar in Oriel Park and in watering holes across the town, the match was analysed with smiles and laughs, rather than the sighs and frowns of previous games.

Players were greeted like heroes as they adjourned to the Lilywhite Lounge – fathers took their sons up to them and got their pictures taken, while others queued up to shake hands with the men who had made their dreams come true.

It was truly a marvellous night – one to remember in a season that most, up until last Friday, were trying to forget.