The introduction of summer football means that League of Ireland fans have had to look elsewhere for their Christmas football fix over the past two decades.

It wasn’t always like this. Traditionally, Christmas was a hectic time for domestic football with the Leinster Senior Cup final and league games regularly pencilled in for St Stephen’s Day.  Indeed, back in 1966, we beat Drumcondra 2-1 in a league game in Dublin on St Stephen’s Day before returning to the capital the following day to lose against Bohemians in the Leinster Senior Cup final!

As a club, we have never played on Christmas Day but a trawl through the archives shows that Dundalk FC have been in action on Christmas Eve on seven different occasions. Four of those seven games ended in defeat, one in a draw and another two in victories.

Our last outing on December 24th was against Shamrock Rovers at Oriel Park in 1978. Here, we take a look back at that Christmas, 44 years ago, when Jim McLaughlin’s men came alive to begin their march into the history books.

The game against Rovers took on extra importance after a 1-0 defeat against Waterford at Kilcohan Park on December 17th, a result that saw McLaughlin’s men suffer their second league defeat in 13 games and drop from joint top to fourth place in the table.

The game was shrouded in controversy, on and off the pitch!

Dundalk’s preparations were thrown into disarray when Cathal Muckian and Paddy Dunning were selected for a 16-man League of Ireland squad to go on a week-long tour of Saudi Arabia!

As it transpired, the two-game trip was abandoned at the last minute.  Muckian was informed of the decision by a journalist, and not the league, on the morning of Saturday, December 16th –  just 24 hours before the squad were due to fly to Jeddah.

“It was the most ham-fisted effort ever,” Muckian told The Argus. After booking time off from his bank job to go on the trip, his appearance at work on the Monday was greeted with quips like: ‘Where’s the sun tan?’

With a squad already hit hard by a combination of flu, injuries and suspension, Muckian and Dunning’s absence meant that Dundalk were facing the prospect of travelling to Waterford with six players missing.

Chairman Enda McGuill tried in vain to get the game called off but despite presenting League of Ireland officials with doctors certificates at an Emergency Committee Meeting at Merrion Square on the Friday night, Dundalk’s protests fell on deaf ears. With nobody on the six-man committee seconding McGuill’s proposal, the game was given the green light to go ahead less than 48 hours later.

Muckian and Dunning were able to take their place in the starting line-up but with Hilary Carlyle suspended, Jimmy Dainty and Kevin Mahon absent with flu, and the injured Tommy McConville deployed in a sweeper role behind the back four, Dundalk battled hard but were beaten by Mel Roche’s 13th-minute goal.

McLaughlin, who was forced to name himself as a substitute, watched the latter stages of the game from the dressing rooms after a ‘set-to’ with referee Paddy Mulhall. The incident occurred after the ball was kicked out of the ground with a second one going the same way seconds later.

A third was introduced but it was deemed too soft to play with and things threatened to spill over when one of the Waterford contingent asked the Dundalk bench ‘Have you not got a pump?’

Speaking to the Democrat afterwards, Jim clarified events, saying: “I was not sent off, I decided to go on my own accord because I was so frustrated. I was protesting to the referee about the time wasting and the switching of balls.

“It was absolutely infuriating and when the ref ordered me back to the bench I twice refused before telling him I would leave of my own volition and he said: ‘Go on then’” 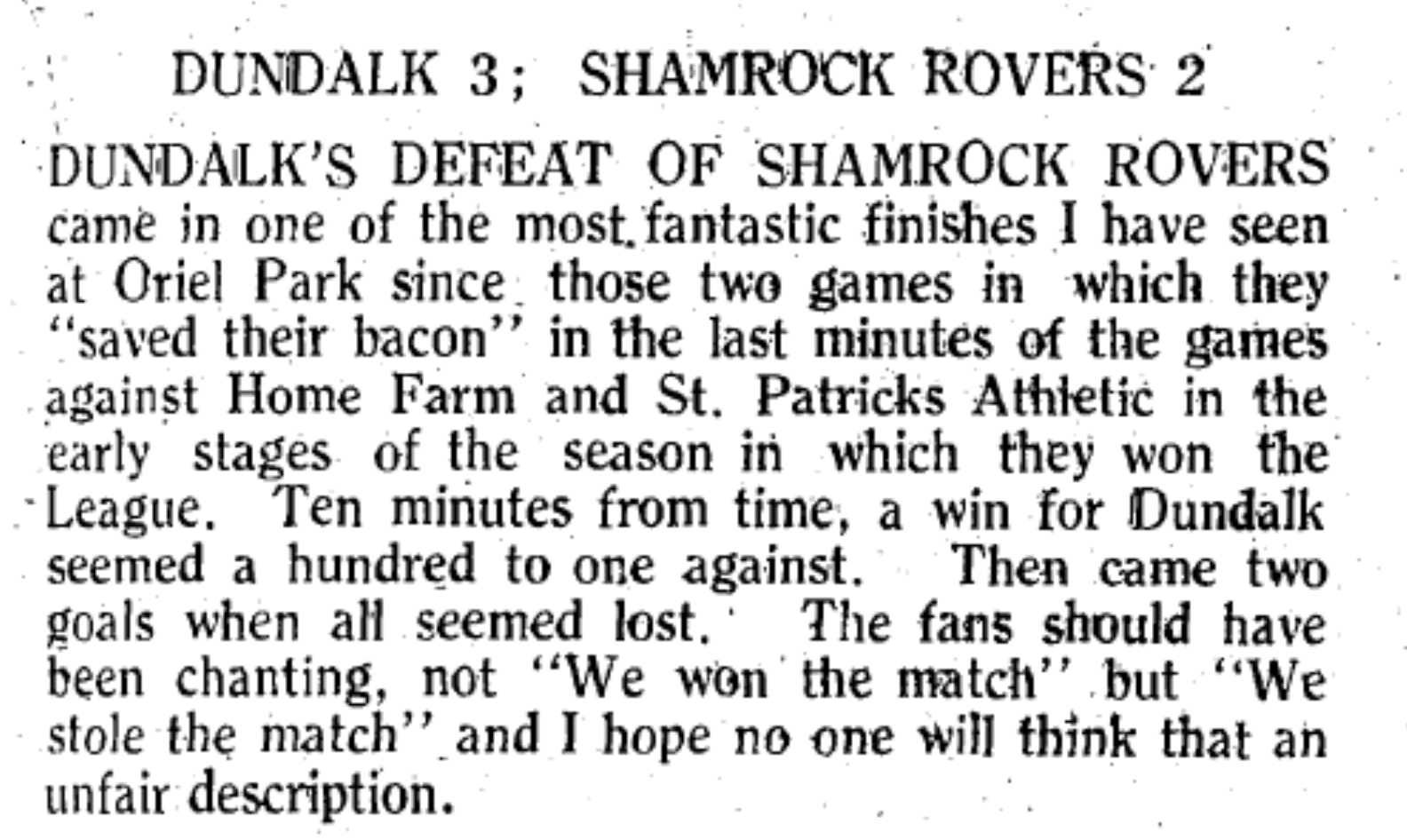 Rovers made the trip to Oriel on Christmas Eve looking to close the gap on fourth-placed Dundalk to just one point.

With so much at stake, and the rain teeming down, it didn’t take long for the Christmas spirit to disappear.  Rovers striker Ray Treacy, who had earlier been spoken to by referee Billy Attley for a bad tackle on Dermot Keely, was shown a red card in the 25th minute for taking a swing at Paddy Dunning. Treacy took refuge in the Rovers dugout but that only incensed the Dundalk supporters and at half-time The Argus reported that he was ‘ushered to the dressing room at the referee’s command.’

Despite going down to ten-men, Johnny Giles’ side went in front when Eddie Byrne beat Richie Blackmore before Sean Byrne equalised to send the teams in all square at the break. Martin Meagan put Rovers ahead again just 90 seconds after the restart and with Giles dictating the play, and Dundalk captain Mick Lawlor stretchered off with a bad knee injury, it looked like another festive defeat was on the way; the ghosts of Christmas past and all that!

The unlikely introduction of 38-year-old Frank O’Neill, McLaughlin’s assistant and a former Rovers player, helped Dundalk to turn the tide and Muckian met a Keely free-kick to pull the hosts level with 10 minutes to play.

It was a big goal for the striker. After a prolific three-season spell at Drogheda United, he moved to Dundalk in the summer of 1978 for a reported £4,000 but found himself under pressure after scoring just twice in his opening 12 league games. The strike against Rovers set him off on a streak that saw him bag seven in his next seven games!

With the home crowd roaring them on, Dundalk went in search of a winner and it duly arrived in stoppage time when Jimmy Dainty made a brilliant run down the left wing and his cross was slammed home by Leo ‘Pop’ Flanagan to put the cap on a real Christmas cracker!

With Santa Claus safely back in the North Pole, the Lilywhites made the long trip to Limerick on Wednesday, December 27th.

They made the journey in atrocious weather with the torrential rain not only causing havoc to the pitch, but also the fixture list. In total, six of the seven games that were scheduled to take place that night fell by the wayside.

A pitch inspection at 1.45pm cleared the way for the game at the Market’s Field to go ahead and Dundalk knew that a win would take them back to the top of the league table.

Once again, McLaughlin was forced to reshuffle and with captain Mick Lawlor sidelined with the knee injury he sustained against Rovers, Willie Crawley was drafted into the centre of the park alongside Sean Byrne.

With pools of water on the pitch, it threatened to be a long evening but Dundalk hit the front in the 25th minute when Muckian flicked a Jimmy Dainty corner into the path of Hilary Carlyle and ‘Big Hilda’ made no mistake with his close-range header.

Muckian made it 2-0 before the interval and with Tommy McConville at his imperial best, the hosts became frustrated and ended the game with ten-men following the dismissal of Tony Fitzgerald.

“I was against playing the match because of the conditions,” said McLaughlin afterwards. “I felt that it wouldn’t be a match, more of a lottery but I was glad afterwards that we played it.” 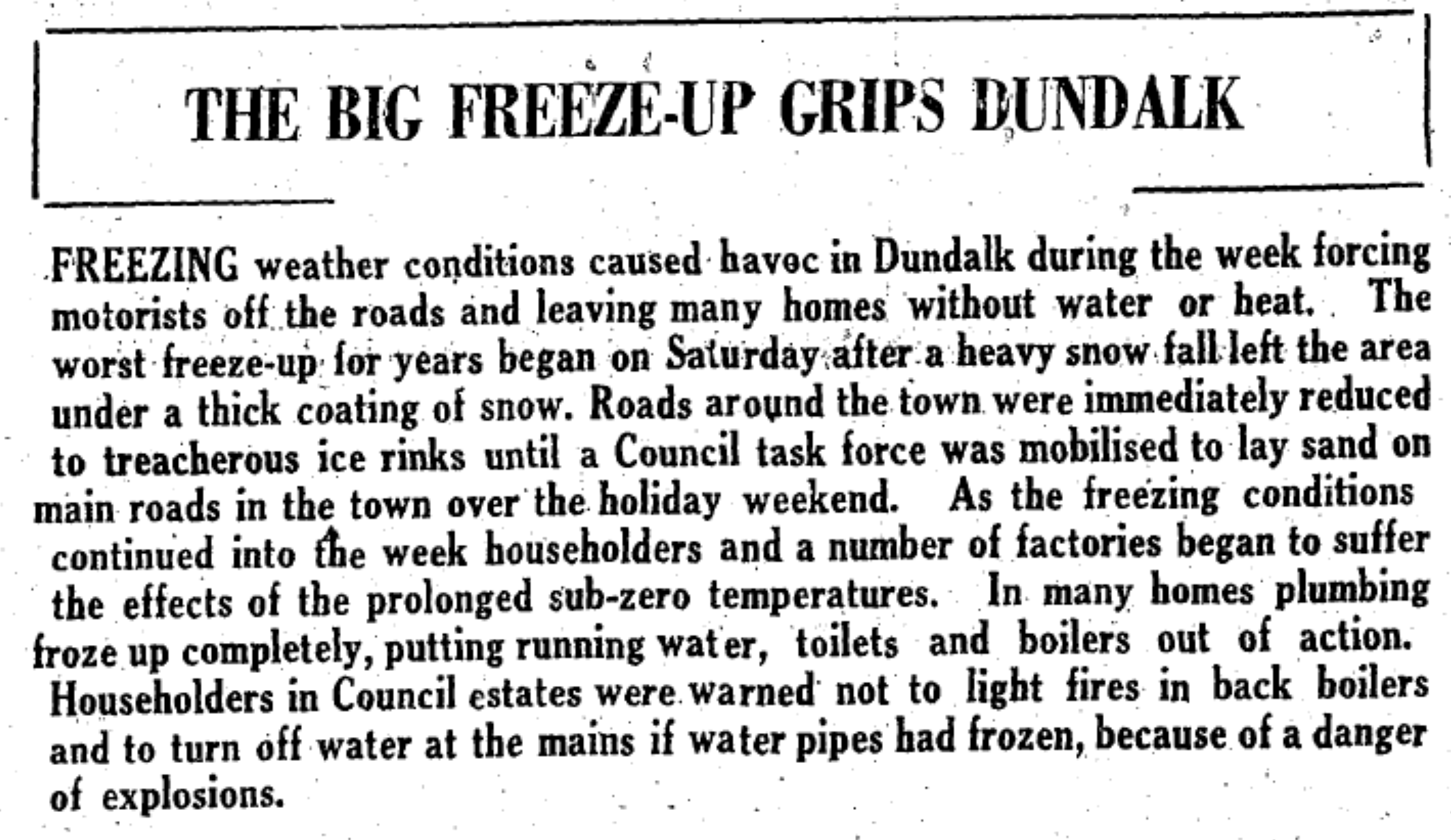 After the rain, came the snow…

The curtain came down on 1978 with Dundalk – and the rest of the country – battling against arctic conditions.

Described by the Democrat as ‘the worst freeze-up for years’, the weather meant that the final home game of the year, against Athlone Town at Oriel Park on New Year’s Eve, was postponed after referee Pat Reynolds deemed the pitch unplayable.

The year ended with Dundalk sitting two points clear of Bohemians at the summit and although the Gypsies had two games in hand, the Democrat summed it up nicely, saying: ‘A bird in the hand is worth two in the bush.’

McLaughlin’s side started 1979 in rampant fashion, winning nine of their next 10 league games as they became the first Dundalk team to win the league and FAI Cup double.