Dundalk suffered their first defeat in six on Sunday evening as they went down 3-0 to Shamrock Rovers at Tallaght Stadium.

First half goals from Aaron Greene and Richie Towell were added to in the second period by Rory Gaffney to give the league leaders all three points.

Head Coach Stephen O’Donnell made three changes to the side which won away to Bohemians last week with Patrick Hoban, Joe Adams and Andy Boyle, who is serving a suspension, dropping out of the starting XI with John Martin, Robbie Benson and Robbie McCourt coming in to replace them.

Ronan Finn had an early chance when he got in behind following a ball over the top from Lee Grace however he blazed over the bar.

John Martin almost put the visitors in front when he got his head to Darragh Leahy’s cross but couldn’t find the net under pressure from Daniel Cleary.

It would be Cleary though who would play a key role in the opener.

Just before the quarter hour mark, the defender stole possession and played a quick ball forward to Rory Gaffney who got away from Robbie McCourt. He was through on goal but squared it for Greene who tapped into the net to give Rovers the lead.

Dundalk did look to respond and just after the half hour mark it looked like they had when Martin got in behind and slotted home past Mannus however referee Rob Harvey called back for a foul by the Waterford man.

The free-kick would lead to Rovers doubling their advantage when the ball set Greene away on the left and he turned provider this time to square it for Towell and he tapped home.

The Lilywhites had the better of it again before the break and Martin again got in behind to force a save from Mannus while Bradley also fired just over from the edge of the area.

Greg Sloggett had an opening on the stroke of half-time as he found space on the edge of the area but his effort was easy for Mannus. 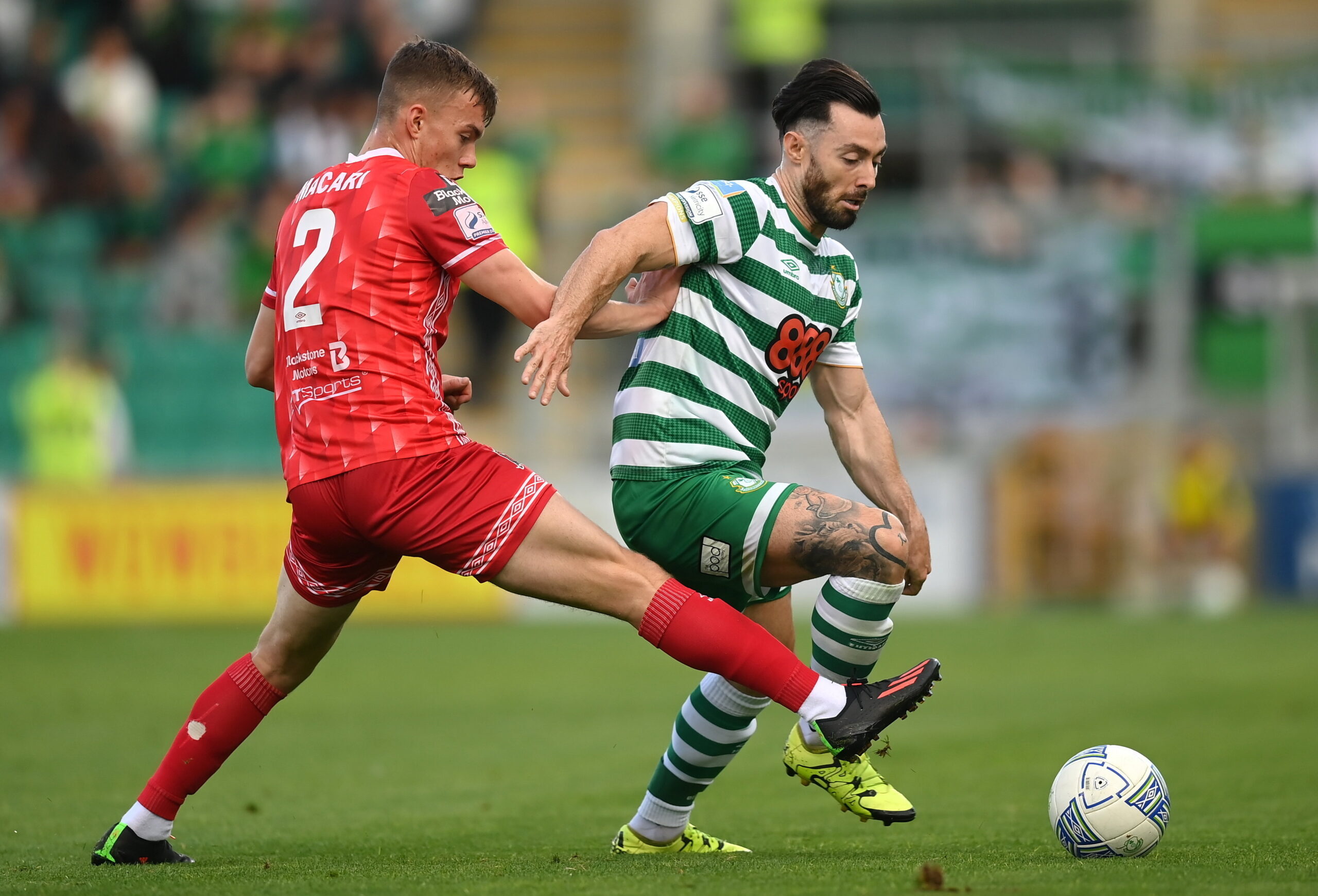 Martin looked like he had managed to finally get his goal but Mannus saved again. The corner led to a number of chances with Keith Ward, Alfie Lewis and Ryan O’Kane were blocked just before the half-time whistle.

Runar Hauge was introduced at the interval for Ryan O’Kane but it was his fellow Hibernian loanee Bradley who would get the first chance of the half however his shot from distance was wide.

Dundalk did dominate possession and it looked like they had pulled one back when Ward did brilliantly to win a free-kick just outside the area. He took it and it seemed destined for the bottom left corner however Mannus somehow got across to keep it out.

Rovers would counter attack to make it 3-0 though when Greene sped clear and he squared it for Gaffney who fired to the net. 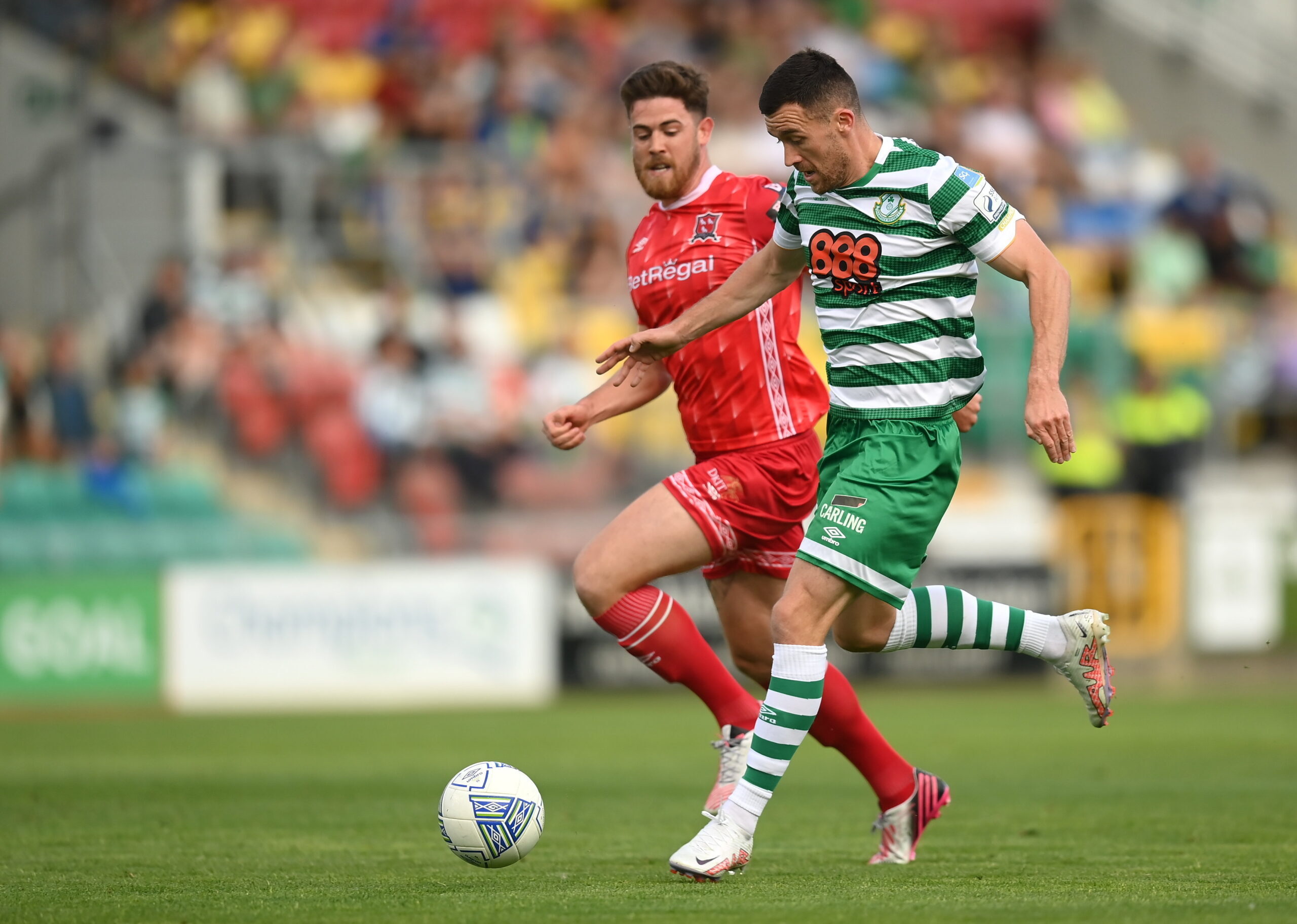 Aidomo Emakhu almost got the fourth but his low drive was well saved by Shepperd.

Mannus had to be at his best at the other end to keep out a vicious Robbie Benson drive too and the former Northern Ireland international produced a brilliant double save to deny first Ward and then David McMillan from close range.

That proved to be the final action as Mannus denied the Lilywhites from grabbing a consolation and we move back into extra.ie FAI Cup action to face Wexford in Ferrycarrig Park on Friday.