U19 BOYS IN GREEN

Ryan O’Kane and Val Adedokun are both hoping to be capped by the Republic of Ireland U19 team in the near future after taking part in last weekend’s training camp in Enfield, Co Meath.

Irish U19 manager Tom Mohan arranged the three-day get together at Johnstown Estate as preparation for this autumn’s UEFA European Championship qualifiers and speaking to dundalkfc.com on their return to Oriel Park earlier this week, both players spoke of their delight at being involved.

“I thought it went very well,” said Adedokun. “It was great to play with a lot of good players my age, and see if I could match their level, or even better it.”

Val has previous experience of being involved with the Republic’s underage squads in the past, but for local-boy Ryan it was his first call-up, adding to what has already been a whirlwind 2021 for the Marist Leaving Cert student

“It was unbelievable just to be called up,” he said. “Being Irish, it’s a huge honour to get a call-up for your country. My whole family has been supporting Ireland all of their lives, so it was a great experience all round. 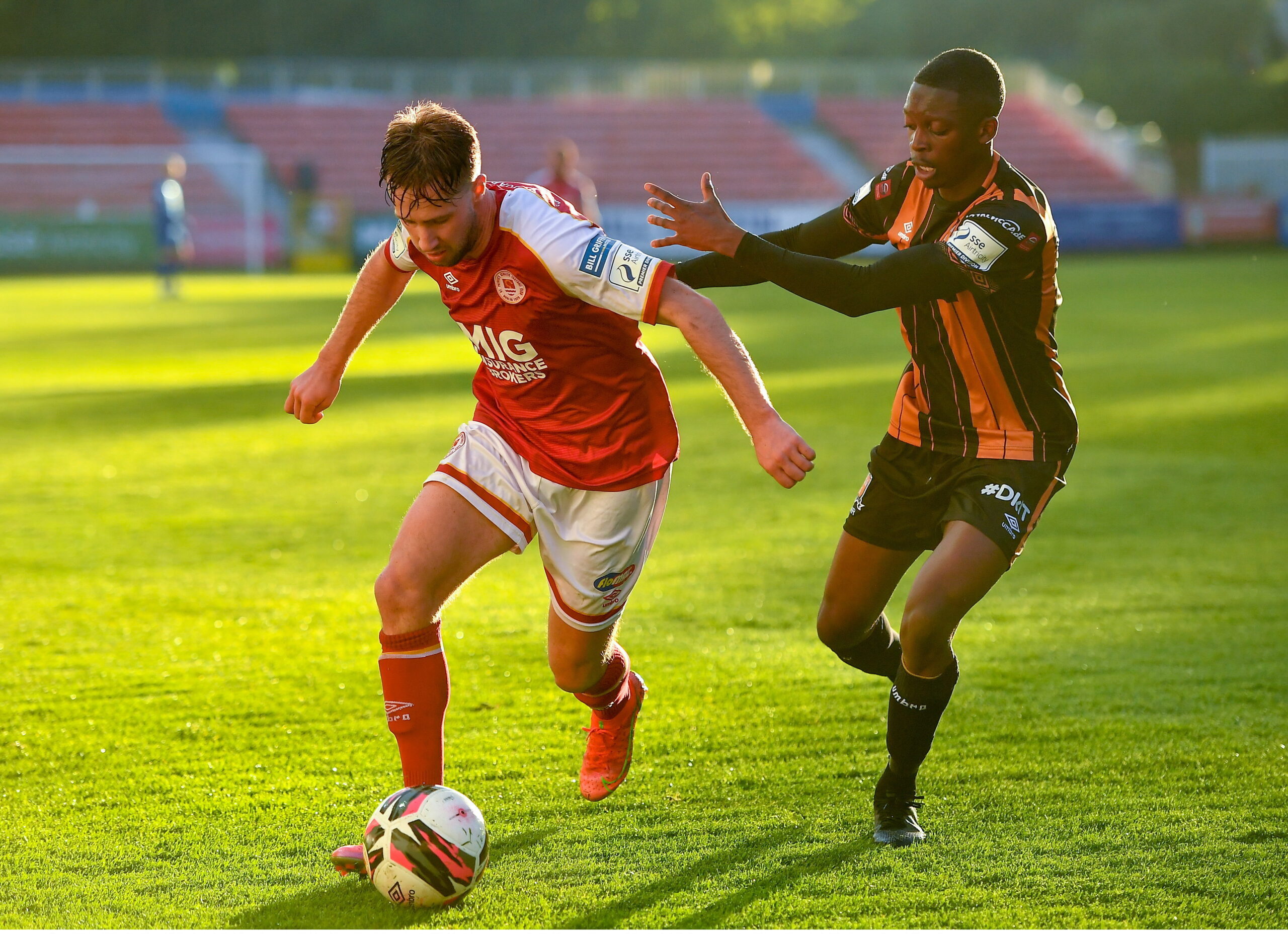 28 May 2021; Billy King of St Patrick’s Athletic in action against Val Adedokun of Dundalk during the SSE Airtricity League Premier Division match at Richmond Park in Dublin. Photo by Seb Daly/Sportsfile

“It’s still crazy to think about the past four months,” he added, “from signing with the U19s to coming up and being asked to train with the first team and then signing professionally. Now being called up to the Ireland U19 squad is just crazy, I still don’t believe it myself. It’s just unbelievable.”

Val and Ryan were joined in Enfield by central defender Andrew Quinn, who is currently impressing on loan at Bray Wanderers, and Adedokun said the inclusion of three Dundalk players was a glowing reflection of the club’s academy set-up.

“It was good seeing other players from our club involved,” said Val. “It shows how much better the academy has become over the past few years and, hopefully, now we can have a few more involved. There’s no point stopping with three when we could have five or six.”

Dundalk’s 2021 campaign might not have caught fire just yet but for Adedokun and O’Kane, it has been a notable year. Both teenagers have been involved in first-team action and Adedokun started the 2-0 win over St Patrick’s Athletic before the mid-season break.

“It’s been a positive year for me, getting into the first team, but I still hope to get a few more matches in,” he said. “I can’t just stop at the couple that I have.

“I’ll be looking to get a few more under my belt and trying to secure a permanent position in the first team, but I’m enjoying it at the moment. I’ll keep working hard and hopefully, there’s more to come.”

“Val’s doing unbelievably well,” said his teammate. “In his last game against Pat’s, he was one of the best players on the pitch. I think, for us, when we get our chances, we have to make the most of them and I think that’s what we’ve done so far. We just have to keep working now and keep our heads down.”

Over the next few months, both players have their minds set on performing well enough with the Lilywhites to earn some caps at U19 level for the Republic of Ireland.

“With the SSE Airtricity U19 League coming back, I’ll hopefully get more game time there and if I keep impressing, hopefully, I’ll gain another call-up soon enough. That’s the goal,” said O’Kane. 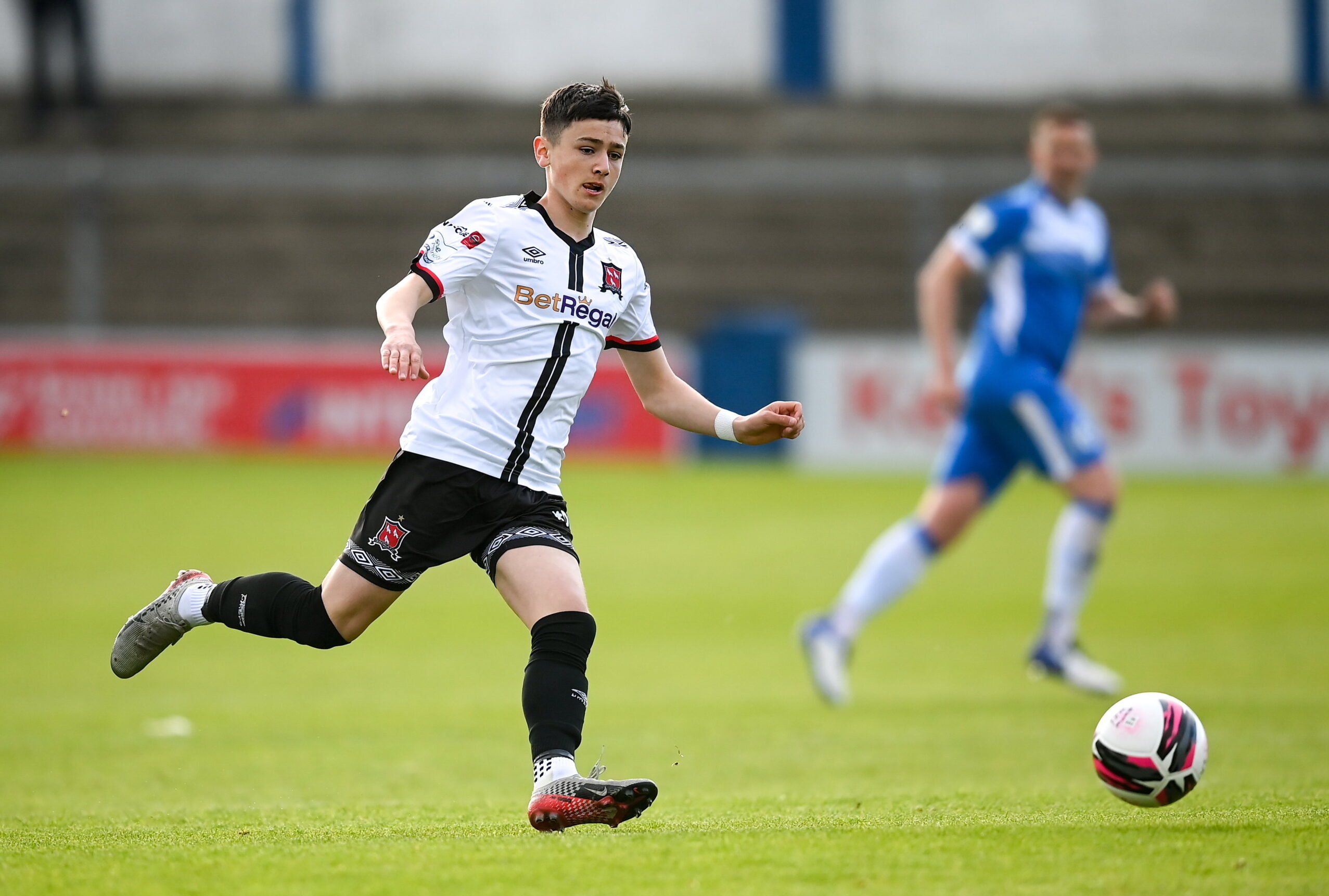 14 May 2021; Ryan O’Kane of Dundalk during the SSE Airtricity League Premier Division match with Finn Harps at Finn Park. Photo by Stephen McCarthy/Sportsfile

That view was matched by Adedokun. “The Euros are on next year, so there are a few games coming in the near future, and I’ll be looking to push to get into the Irish squad,” said Adedokun.

“That will all come from my performances at Dundalk,” he said. “If I don’t perform here, I won’t get into the Irish squad. I don’t look into it too much. I’ll just try my best here, and if I do well, I’ll get in the squad there.”

Turning their attention back to domestic matters, both youngsters are hoping that the Lilywhites can continue to build on the wins over Shamrock Rovers and St Patrick’s Athletic before the mid-season break when Waterford come to Oriel Park on Friday night.

“We’ve been inconsistent, to say the least, but we got a good win before the break,” said Adedokun. “Hopefully, we can get a good stretch of wins with the fixtures we have. On a good day, we’ve shown we can beat any team, so there is no reason we can’t put a few wins together now.”

“We had an unbelievable result at Richmond Park before the break,” added O’Kane. “I know we struggled in the game before that against Bohs, but we showed great character against Pat’s, and we’ll hopefully get another good result and kick on from there,” said O’Kane.