February 14th, 2021 marks the 10th anniversary of Dundalk’s fantastic 5-3 win over Linfield in the Setanta Cup at Windsor Park. We take a look back at a night when Belfast-native Daniel Kearns returned to his home city and tore the Blues apart with a sensational hat-trick.

Belfast boy Daniel Kearns was the star of the show for Ian Foster’s side, hitting a hat-trick on a magnificent night for the Lilywhites. New signings Mark Quigley and Jason Byrne were equally as impressive as Dundalk ripped Linfield apart going forward and on the evidence of this performance, their front four will cause problems for any side in the country.

Dundalk were due to play at Windsor Park in the 1979 European Cup but following the ill-fated match at Oriel Park, which was marred by rioting, the second leg was moved to Holland. Any mention of Dundalk and Linfield will always evoke memories of the events in 1979. However that was 32 years ago now and after witnessing this clash in Belfast, footballing ability, not violence on the terraces, will hopefully be what younger generations will relate to when they hear both clubs names mentioned in the same breath in the future. 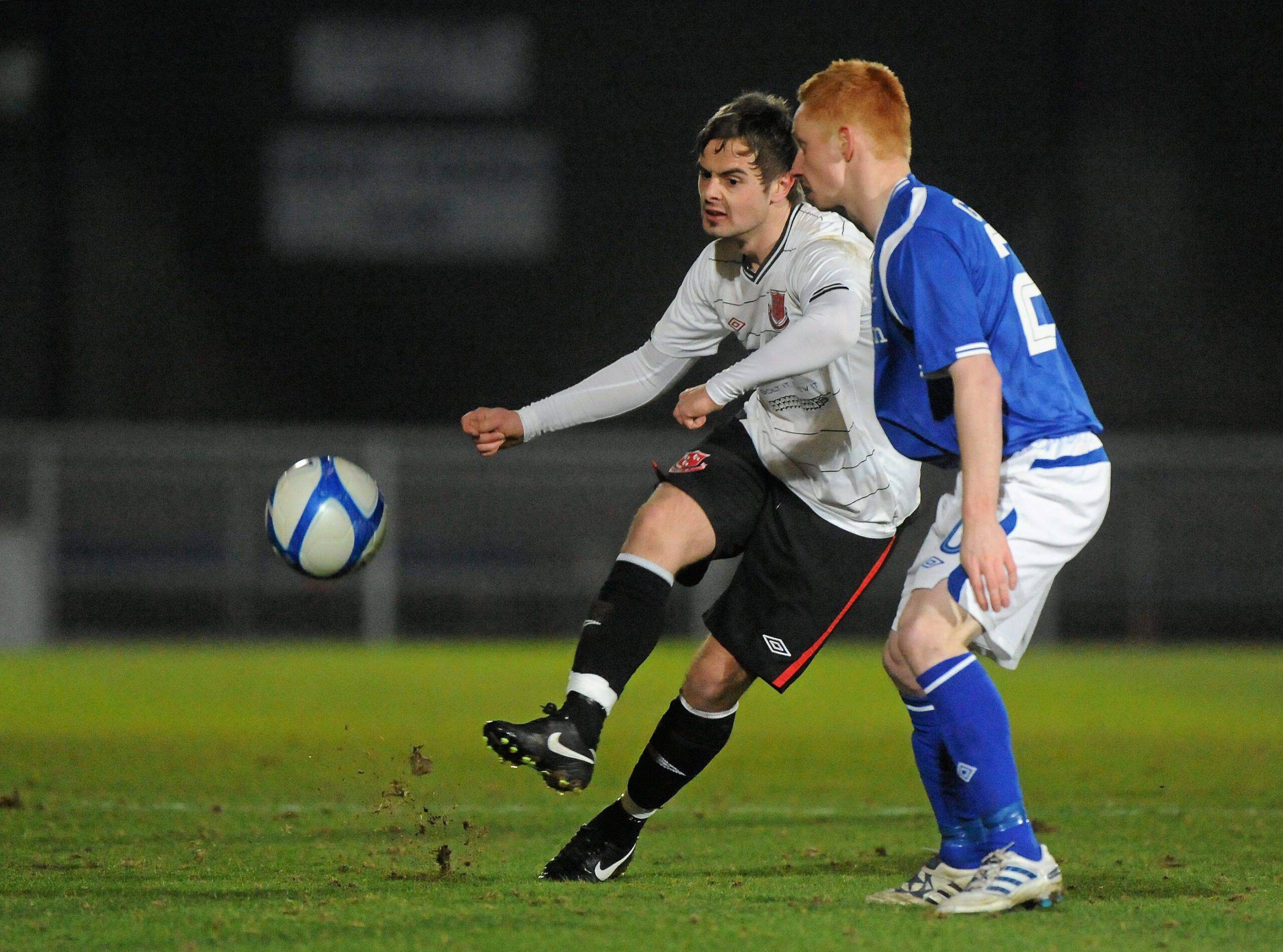 Linfield went into this game on the back of just four defeats in 27 league games. David Jeffreys’s side were held to a 1-1 draw in the Irish Cup by amateur outfit Dunmurry Rec just two days previously and the Blues boss responded to the shock by naming a full-strength side.

A bright opening saw both sides look to attack at every opportunity. Kearns’ influence was there for all to see in the early stages with the Irish Under-21 star providing his defence, manned brilliantly by Hawkins and Bennett, with an out ball to relieve any pressure thrown at them.

Taking into account their superior fitness levels, it was no surprise that Linfield gradually crept on top of things. Dundalk looked slow to press their opponents and there was a real let-off for the visitors when Billy Joe Burns could only shoot straight at Peter Cherrie after Jamie Mulgrew picked Kearns’s pocket on the edge of the Dundalk penalty area. 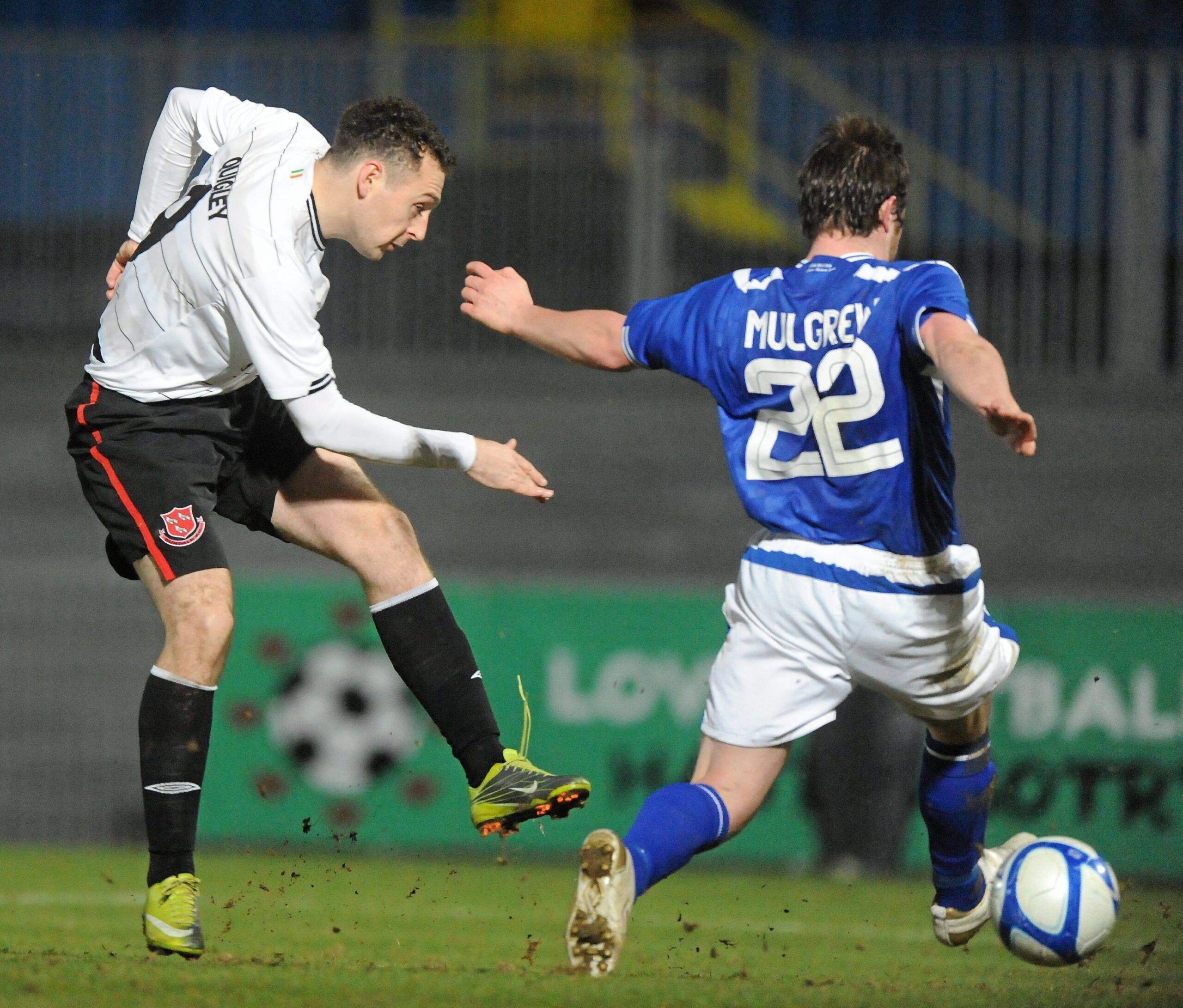 Five minutes later and Dundalk were again on the back foot as Robert Garrett danced his way into the penalty area before losing his footing at the crucial moment. Peter Thompson seized upon the loose ball but a number of white shirts, led by Hawkins, charged his effort down.

Bennett grew in stature as the game progressed and it was another of his defensive headers that set Dundalk on their way for the opening goal in the 31st minute; the result of a fantastic counter-attack. Mark Quigley picked out Jason Byrne on the left and the former Irish international’s first-time cross was perfectly weighted for Kearns to fire home via the post.

Linfield tried to respond immediately with Michael Gault smacking a half volley over the crossbar but it was the visitors who should have doubled their lead in the 37th minute. Greg Bolger’s effort was well blocked by William Murphy but Quigley, with only Alan Blayney to beat, drilled the rebound wide from eight yards. Byrne then forced Blayney into a fantastic stop with a deft curling effort that had the Linfield goalkeeper scrambling across his line to tip over the bar. 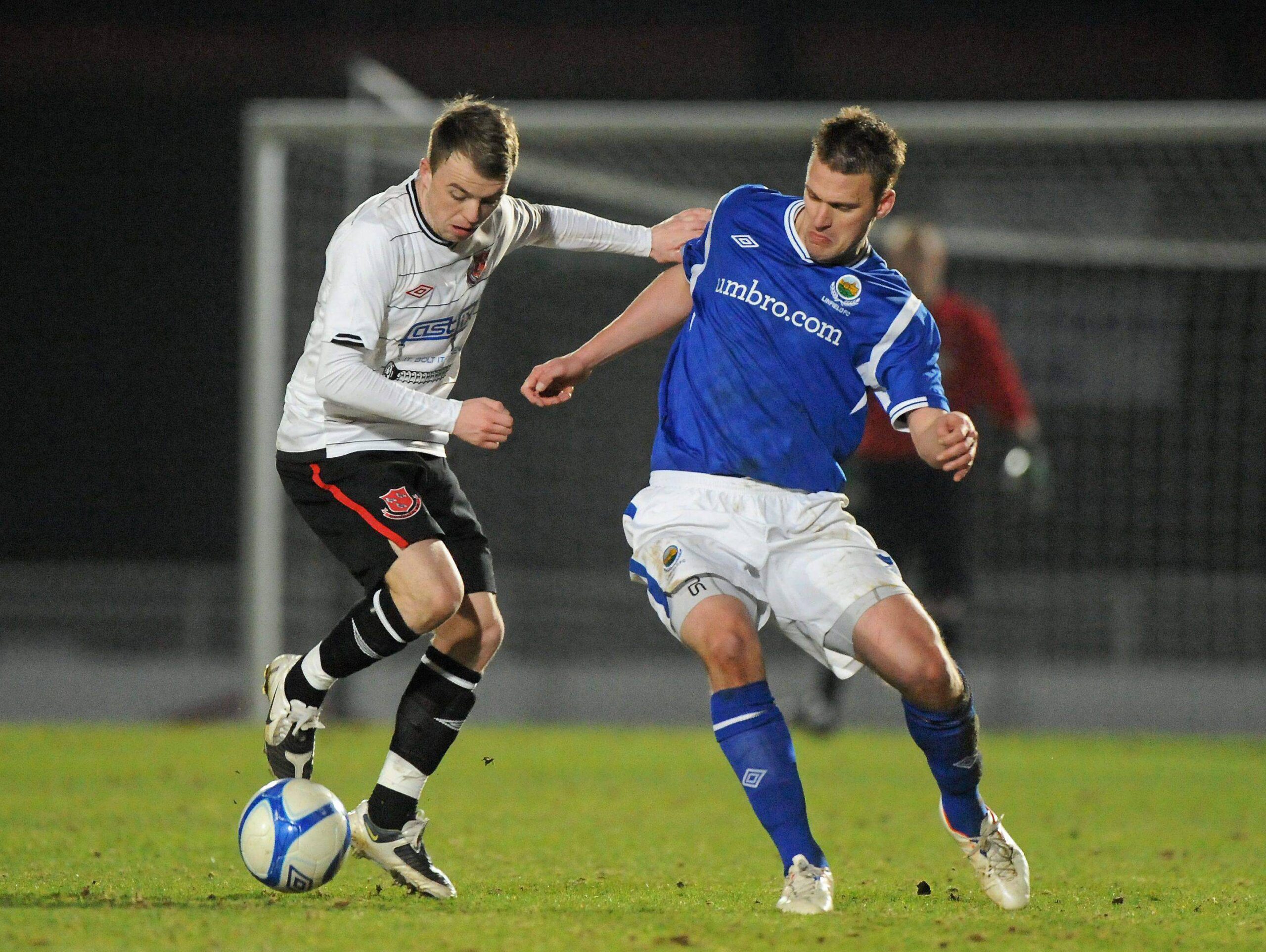 With the game now opening up, Thompson was involved again in the 38th minute, fancying his chances in a flat race with Dean Bennett. The makeshift defender, however, made a sensational last ditch tackle which saw referee Stephen Weatherall correctly wave away the Linfield protests for a penalty.

With the sides level at the break, many expected a Linfield onslaught in the second half. Instead, however, it was Dundalk who looked the most likely with their fluid 4-2-3-1 system causing the Linfield backline all sorts of problems.

Quigley restored their lead with a wonderful finish in the 54th minute. Ross Gaynor’s low cross found its way past William Murphy to the striker at the back post and the former Bohs player created a yard of space with a brilliant Cryuff turn before placing the ball across Blayney into the corner of the net. 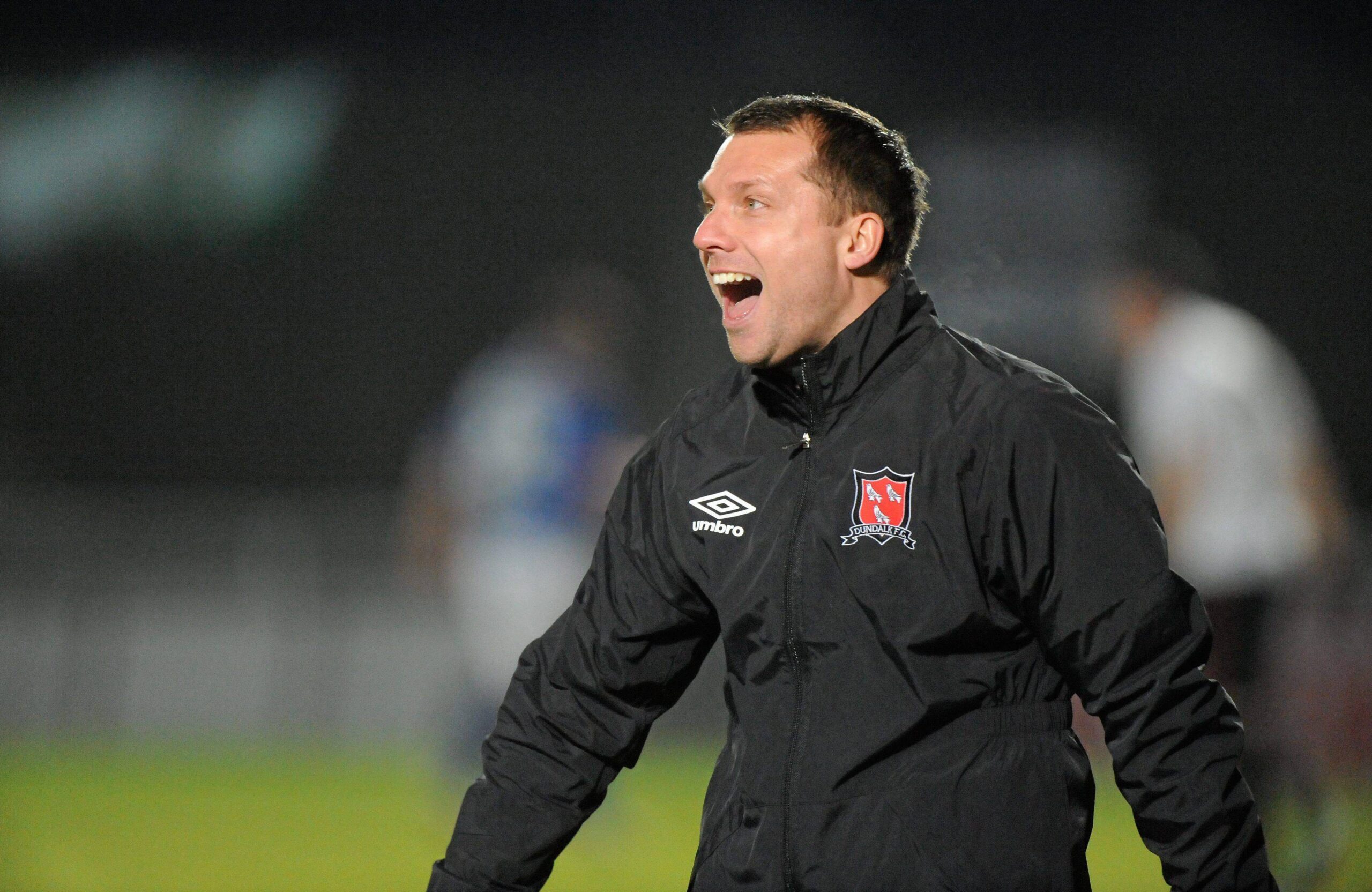 Linfield refused to lie down and they hauled Dundalk back again eight minutes later. Thompson went down under a rash tackle from Hawkins – the only foot he put wrong during the 90 minutes – and  Robert Garrett’s low shot found the net after Peter Cherrie had made a great save to stop Thompson’s spot-kick.

Foster’s men turned on the style, though, and Kearns grabbed a second following great interplay with Quigley in the 66th minute. The winger played a smart one-two with Quigley before crashing his effort past Blayney for his second of the night.

Quigley looked to have put the icing on the cake, capping a great display with a stunning 20-yard volley in the 75th minute, but Linfield’s Curtis Allen again reduced the deficit to just one goal with a late effort and but for Peter Cherrie’s magnificent stop in the 92nd minute, the substitute would have made it 4-4.  From the resulting break, Kearns had the final say of a pulsating game, racing clear to slide the ball home and secure the match ball and an unforgettable win for Foster’s men. 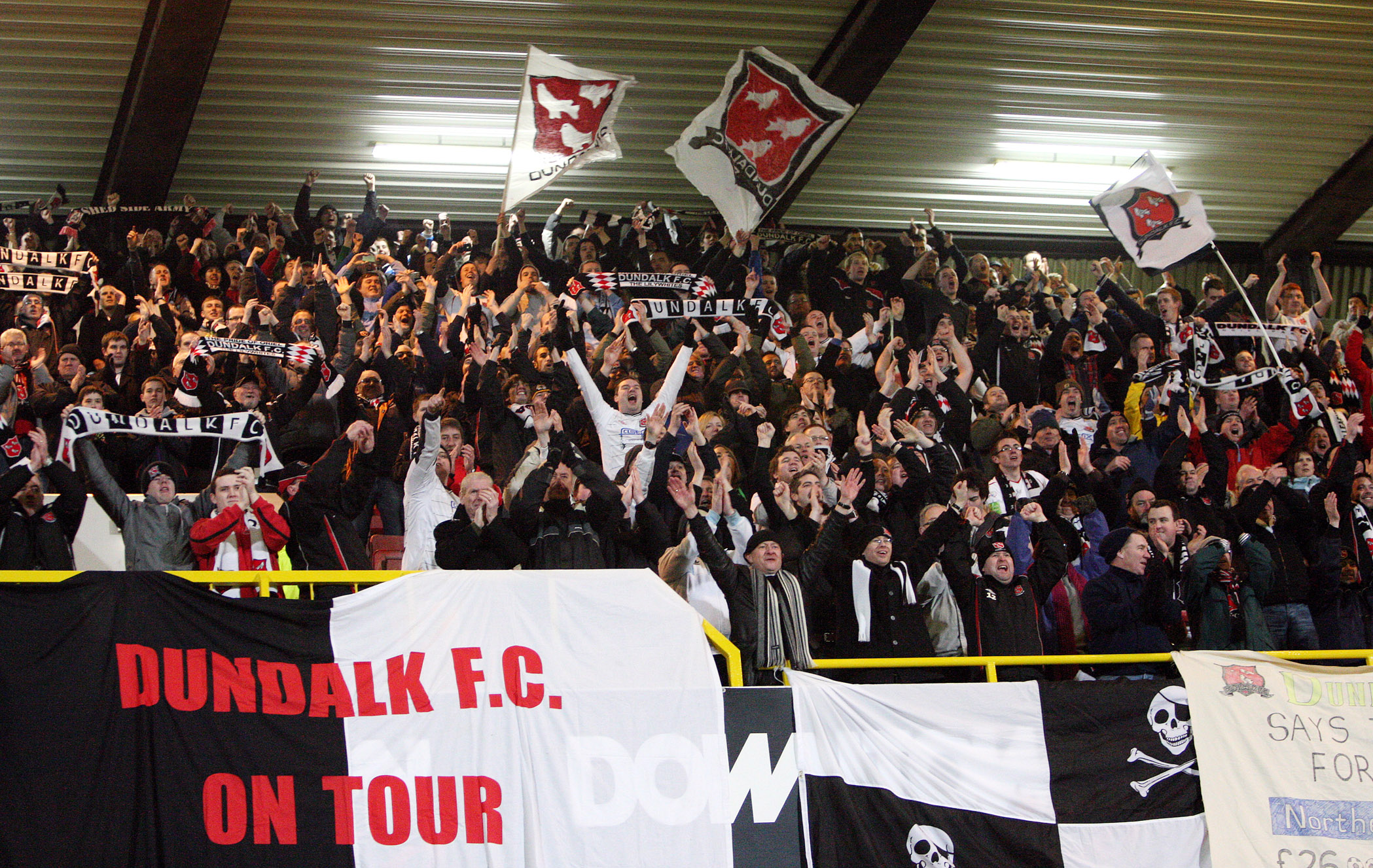 Dundalk fans applaud the team at the full-time after they defeated Linfield in the first leg of the Setanta Cup at Windsor Park. picture: Mick Slevin RIP 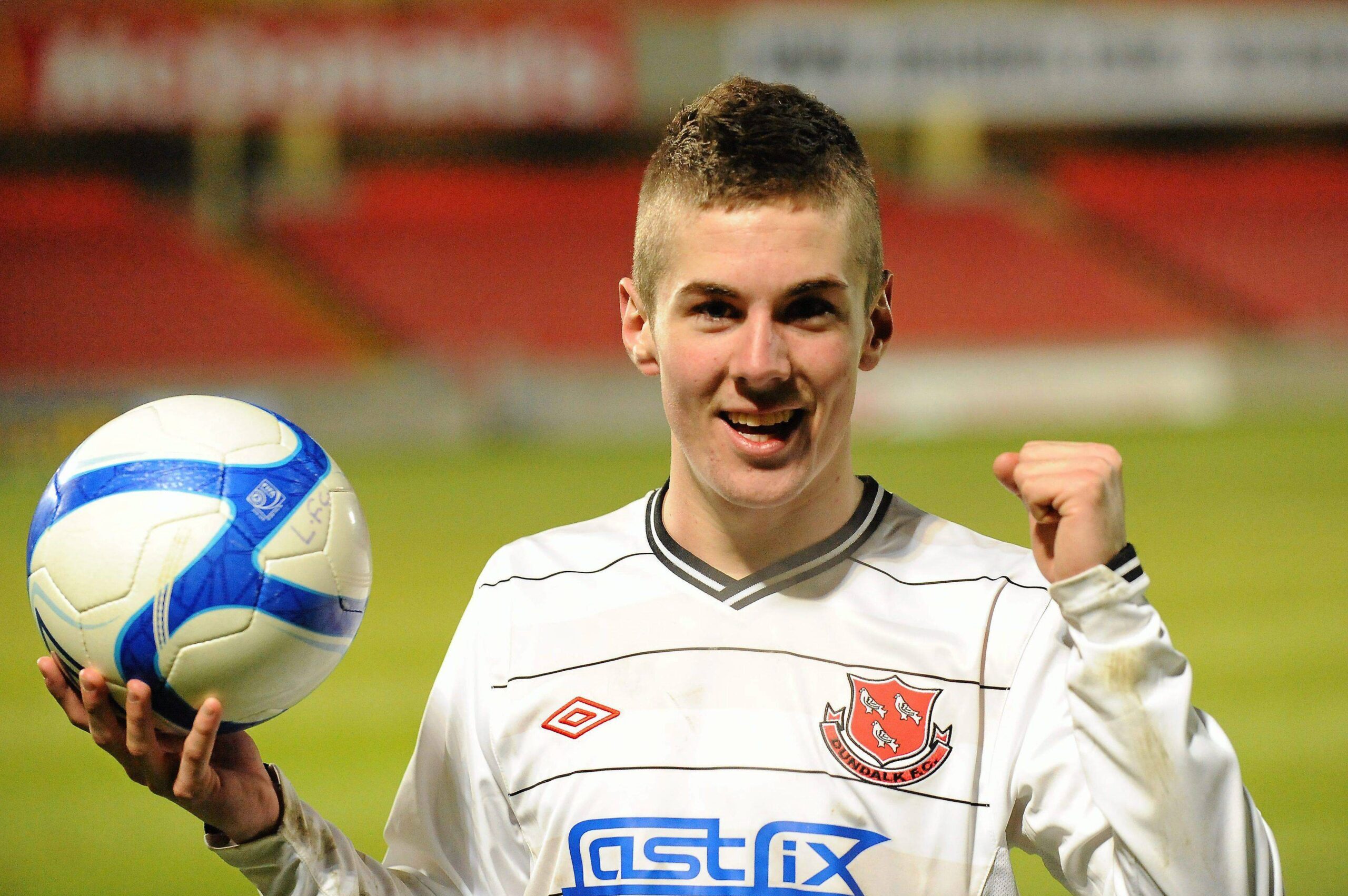 “I’m delighted. It’s the first hat-trick I’ve scored since I was a kid. Obviously, it’s great for me. I only live ten minutes down the road and all my family and friends were here so to score a hat-trick in front of them makes me really proud. They were all well-worked goals. We kept it tight at the back and caught Linfield on the break. Going forward we cut them open. The gaffer lets us enjoy our football and encourages us to go forward. We have great attacking players here and once we get in the final third we can hurt teams.”

“I thought Danny Kearns was exceptional. His temperament was great because he was under a bit of pressure coming here. He handled himself fabulously well as I expected him to. He’s a teenager and he has just lit up Windsor Park for me.”

“Danny’s a special player. I played against him last year and thought he was a talented player but working with him first hand in training you can really see how good he is. For a wide man to score a hat-trick away from home says an awful lot about him. Sometimes players with ability and tricks like his don’t have the work rate to match but he has it and he has a really bright future.”

“I’ve got to say I think Dundalk were clinical and I have to congratulate them on their finishing”, said Jeffrey. “I think Alan Blayney only had one other save to make. That was the one he tipped over but it just shows just how clinical Dundalk were.”