Vinny Perth is expecting another slugfest in Tallinn on Thursday evening when Dundalk and Levadia meet in a winner takes all clash in the Estonian capital.

The UEFA Europa Conference League tie is evenly poised after a dramatic 2-2 draw in Tallaght last week and Perth, who described the teams as two boxers with very similar styles, expects another entertaining encounter in the return game.

“I’d hope to think it will be the same as last week,” he said ahead of the squad’s departure from Dublin Airport on Wednesday morning. “The neutrals and people I have met over the last week said that they really enjoyed the game as a spectacle. It’s important to put on a show because that’s what football is all about but, ultimately, we want to win.

“It’s a difficult tie and it’s always difficult away from home but they need to score to beat us so we have to make sure we are set up correctly. At the same time, we have to understand that we have huge attacking threats in our game and we have to exploit that and give people the opportunity to go and score goals.”

This is Dundalk’s second meeting with Levadia. In 2018, the sides met in the Europa League qualifying rounds where the game in Estonia took place at the Kadriorg Stadium. Thursday night’s tie will have a different setting, however, with the tie set to take place at the impressive A Le Coq Arena, home to the Estonian national team.

“I think that will inspire our players,” said Perth. “I think they will be really excited when they turn up at the ground for training on Wednesday night. Footballers want to play in the very best venues that they can and European football is special because of the different stadiums you play in. That’s part of the excitement of the game.”

With temperatures in their high twenties in Tallinn, the conditions could also come into play. Perth agreed that a gruelling 120-minute FAI Cup tie with Treaty United on Sunday wasn’t ideal but he said that he was happy with the squad’s preparation, especially in light of the Estonian government’s decision to place Ireland on their red list over the weekend. 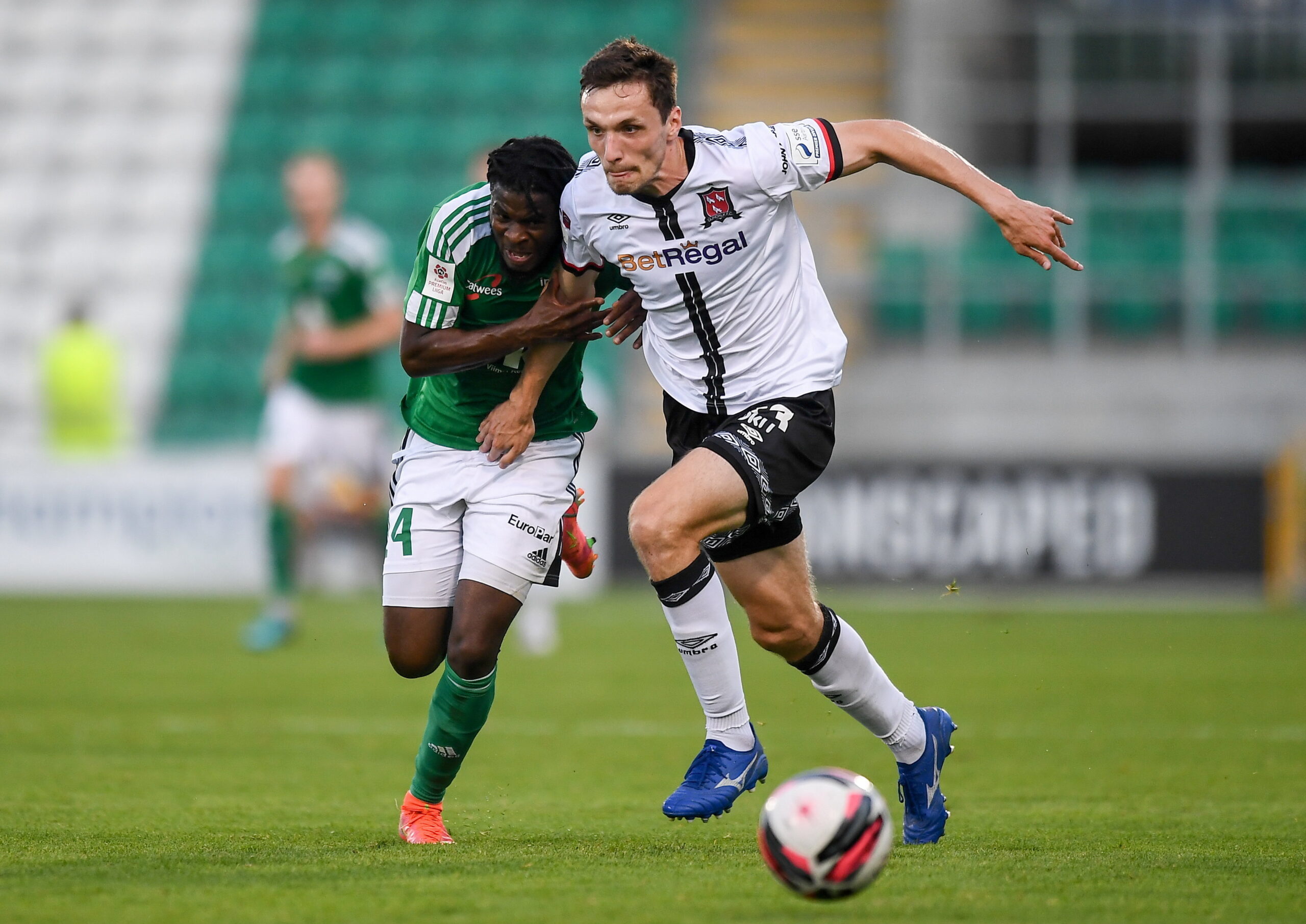 Ernest Agyiri of Levadia in action against Raivis Jurkovskis of Dundalk during the UEFA Europa Conference League second qualifying round first leg match at Tallaght Stadium in Dublin. Photo by Ben McShane/Sportsfile

“We would have liked to have gone on Tuesday but with Covid issues, we felt there was no point in sitting in a hotel for two-and-a-half days before the game,” he said. “We decided to come this morning (Wednesday) which allowed our players to have another night in their own beds.

“We had a very light session on Tuesday and we did some video work so we’re really well prepared. We’ve had the full health checks, as per the protocols and we’re ready to travel. It’s an exciting game for us.”

Patrick Hoban and Michael Duffy both celebrated their birthday on Tuesday but only one of them was on the flight. Hoban has missed the last five games after contracting COVID-19 and Perth said it was a huge lift to have him available.

“Even though it’s his birthday, he’s still managed to complain about the weather so that means that Pat is back to normal,” smiled Perth.

“He’s had a great week. A couple of young lads were taken into a one-on-one session with him on Monday and that was really important for him. He has followed all the protocols and he trained as normal on Tuesday so he is back as part of the squad and that is a real boost for everybody. He is a leader and I’m really happy to have him around.”

The prize on offer for the winners on Thursday night is a showdown with Dutch side Vitesse Arnhem in the third qualifying round. Perth acknowledged it would be difficult against a side that finished fourth in the Eredivisie last season but he said his players were determined to beat Levadia and test themselves against high-quality opposition.