VINNY ON THE DERBY

VINNY ON THE DERBY

The importance of having 500 fans back in Oriel Park tonight is huge. We know that Oriel Park can be a bleak place at times, especially when there is nobody in it. We also play on astroturf and when you combine that with an empty ground, mentally it can be difficult for players, especially when you compare it to some other clubs who play in bigger and better stadiums. It’s something I know the club is trying to fix but, for now, the noise and support of our fans is crucial and we’re all looking forward to having people back in this evening.

I think it has been a major disadvantage to this club over the past 18 months not being able to have our fans in the ground. While we’re still not close to having 3,000 people in the ground, and the Shed singing and dancing, it’s really important that the fans back us through this difficult time and get behind us whenever they can. They did that in Tallaght for the European games and I think it’s hugely important that they get behind us again in tonight’s Louth Derby.

It’s hard to believe it’s the biggest crowd we will have had in the ground since the game against Cork City at the beginning of the 2020 season. A lot has changed since, both for the club and me personally, but I’ve received a lot of support from people around town. The level of goodwill has been huge and now we have an opportunity for people to come to the ground and show that. I feel there is still a lot of people behind the club and the team and while there are lots of people asking legitimate questions, I think, by and large, that people want what is best for the club. It will be great for the players to hear that support on the pitch, as opposed to the noise they hear off it. A huge amount has changed but it’s up to us between now and the end of the season to put the club back where it belongs.

We have had some big Louth Derby wins here over the years but tonight we just need to get back on the bike and pick up three points. The job that Tim Clancy and Kevin Doherty have done at Drogheda United, getting them promoted, followed by the amazing start they made to this season, should not go unnoticed, and we know we will have our work set out this evening. People are pointing at the league table but I don’t think the position of the two clubs is relevant at this moment in time because there are still 42 points to play. The knock-on effect of the European run has left us with a lot of sore and wounded bodies so it suits us having just one game a week and being able to concentrate on one game at a time. We had a difficult week last week. I think the performance against Vitesse Arnhem was one of the best I have ever seen from a Dundalk team but ultimately it ended in defeat and the players know they must bounce back and be inspired by the derby and having people in the ground. 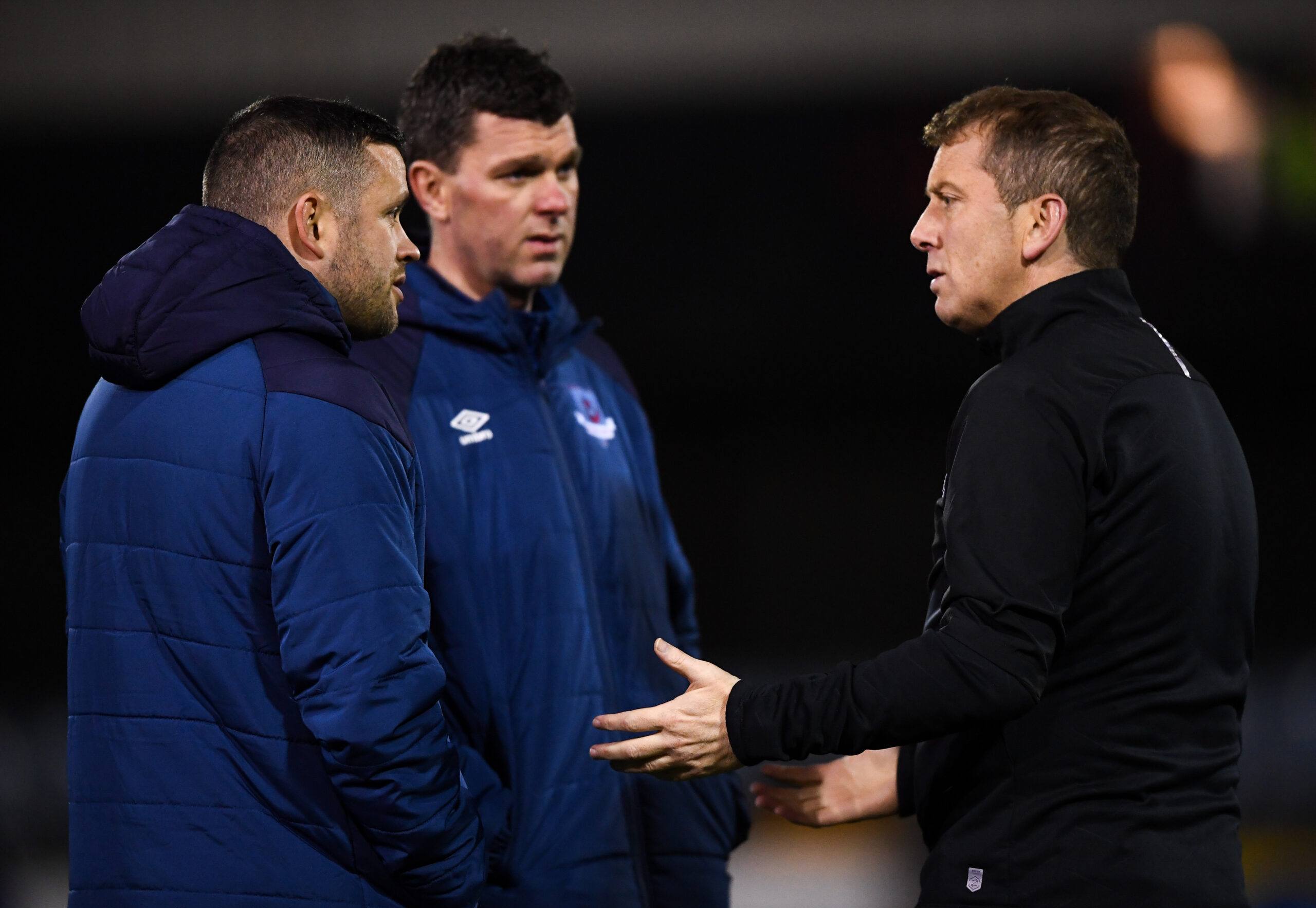 We picked up three serious injuries in Derry last Sunday and each one of them is a different level of severity. Patrick McEleney’s hamstring injury could be anything from two to four or even five weeks. We just don’t know yet until the injury settles down. David McMillan hasn’t broken any bones but there is still a bit of ligament damage that has to be investigated and we’re awaiting the results of a scan and Daniel Kelly is touch and go for this evening. Darragh Leahy missed the game against Derry with an ankle injury. We have had some relatively good news in the sense that the medical team has got the results of the scan and they know what the issue is and are hoping to fix it. I’d imagine that Darragh would be seven to 10 days away from training so we’ll set a target of the FAI Cup game against St Mochtas for him, if not the week after. We have a lot of other sore bodies. The toll of playing three games a week has really affected us but we will have a really strong 11 on the pitch this evening.

Offset against that, Dan Cleary played the full 90 minutes against Derry City which was a huge boost for everyone. Dan is 25, has lots of appearances, league medals, and European experience under his belt, and his best days are ahead of him. If I left him out in the past he would be one of the crankiest men around but the upbringing that he’s had tells us that he’s a real leader and potentially a future captain of this club. He has really matured and he’s a different person from the one that was here when I left the club last year. His injury was close to a 16-week injury but he came back in 10 or 11 weeks which tells me that his work rate and what he does off the pitch has brought him back four or five weeks ahead of schedule. He wouldn’t have done that when he was younger. It’s not that he was a bad professional, it’s just that now he is so focused on his football. The future for this club is bright if we can keep the likes of Daniel Cleary here.

Our two new signings have had another week of training to integrate with the group. Both of them are out of season and have different levels of fitness. Cameron Yates has been really impressive. He’s 22 years of age and the challenge for him is to come in and push Alessio Abibi and Peter Cherrie and I think we have a hell of a good goalkeeper there. Sami Ben Amar is also a very exciting talent. It will take him a bit of time to adapt to Irish football and people need to be patient with him but he’s a player who was worth investing in and we see him as a real prospect over the next six to 18 months at the club.