Dundalk head coach Stephen O’Donnell said that he was more concerned about injuries than results after the Lilywhites slipped to a 2-1 defeat against Waterford in our latest pre-season friendly at the RSC on Saturday.

A first-half brace from Cian Kavanagh gave the Blues the advantage and even though David McMillan pulled one back before the interval, the hosts saw it out.

Speaking to dundalkfc.com afterwards, O’Donnell said he was disappointed to lose the game but after seeing Keith Ward go off with a knock in the first half, he said he was looking at the bigger picture ahead of the SSE Airtricity League opener against Derry City on February 18th.

“The main positive from today is that everyone got minutes under their belt. Getting lads through games unscathed is going to take precedent over results at the minute,” he said.

“As it wore on in the second half, I thought we dominated the game and the lads that came on gave us a real impetus. You don’t want to lose matches but it’s all about getting minutes into lads’ legs and, touch wood, bar an impact injury to Keith, we seem to have come through it okay.

“With the injuries we have at the minute, we don’t have the depth to be doing what we’re doing and making eight or nine changes from game to game and changing the team up but we have to because we don’t want to overload boys and see them get injured.”

Joe Adams and Greg Sloggett both made their first start of 2022, playing 60 minutes apiece, and O’Donnell said both came through the game without any ill effects.

“The two lads haven’t had much at all in terms of game time so it was important they got an hour into them and I’m happy that they don’t seem to have had any reaction. It gives them a platform now to build on now.” 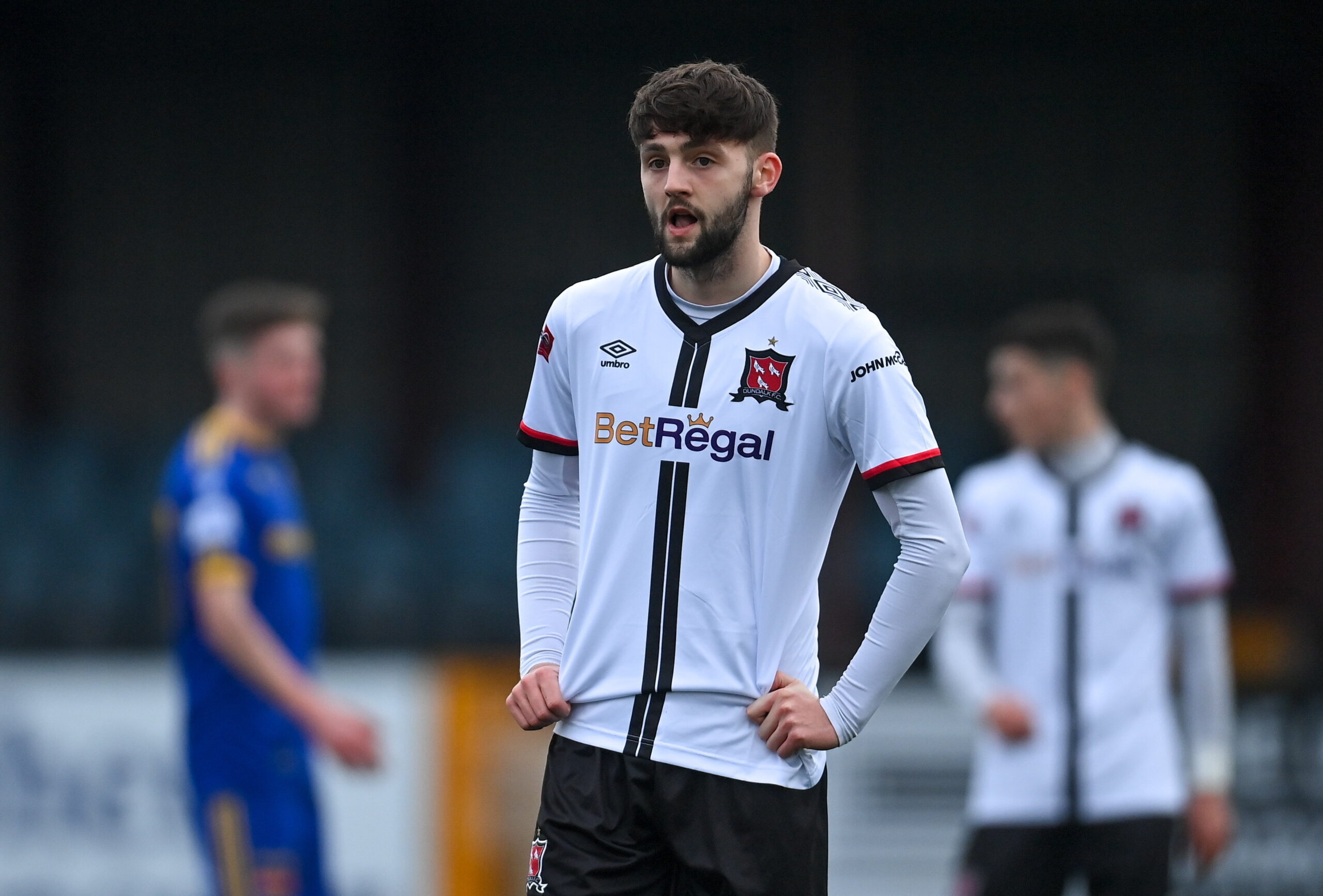 Joe Adams started his first game for Dundalk in the pre-season friendly match against Waterford at the RSC. Photo by Ramsey Cardy/Sportsfile

“They did alright to be fair,” he said. “None of them is training with us and we’re bringing them in specifically for games because they’re at school and can’t train.

“That’s tough in itself because they are joining a crop of lads they are unfamiliar with and getting on a bus to go and play but they did fine and it’s a good experience and an eye-opener for them in regards to the level they have to get to.”

O’Donnell returns to his native Galway when Dundalk face John Caulfield’s Galway United at Eamonn Deacy Park on Wednesday night and he said he was likely to make more changes to his starting XI.

“We’ll see how it goes, body-wise. As I said, I’m conscious of overloading lads, minutes wise. I’d love to have the depth to be playing two different elevens in each game but we don’t have that luxury at the minute.”

A small number of travelling supporters made the journey to the sunny south-east on Saturday and O’Donnell said it was great to hear them make their presence felt for the first time since his return to Oriel Park.

“They were brilliant,” he said. “There were a few in Cork for the Cobh game and last week’s friendly against Bohemians was behind closed doors so it’s the first time I’ve really been opened up to them since I came back.

“It’s a pre-season game in Waterford on a Saturday afternoon and they’ve made the trip down which shows their dedication but I’d expect that from them. The supporters are passionate and intense and that’s why Dundalk is such a great club to play for.”