Drogheda United’s nine-year wait for a league win at Oriel Park came to an end on Friday night as Mark Doyle’s double condemned Dundalk to their fourth straight defeat in all competitions.

Goals either side of the break by the Drogheda winger put the Boynesiders in the ascendancy and although Michael Duffy threw Dundalk a lifeline, we just couldn’t find an equaliser in front of the 500 supporters who were in attendance.

The result, coupled with events elsewhere, leaves Dundalk second from bottom in the table and in the relegation playoff spot with 13 league games to play. 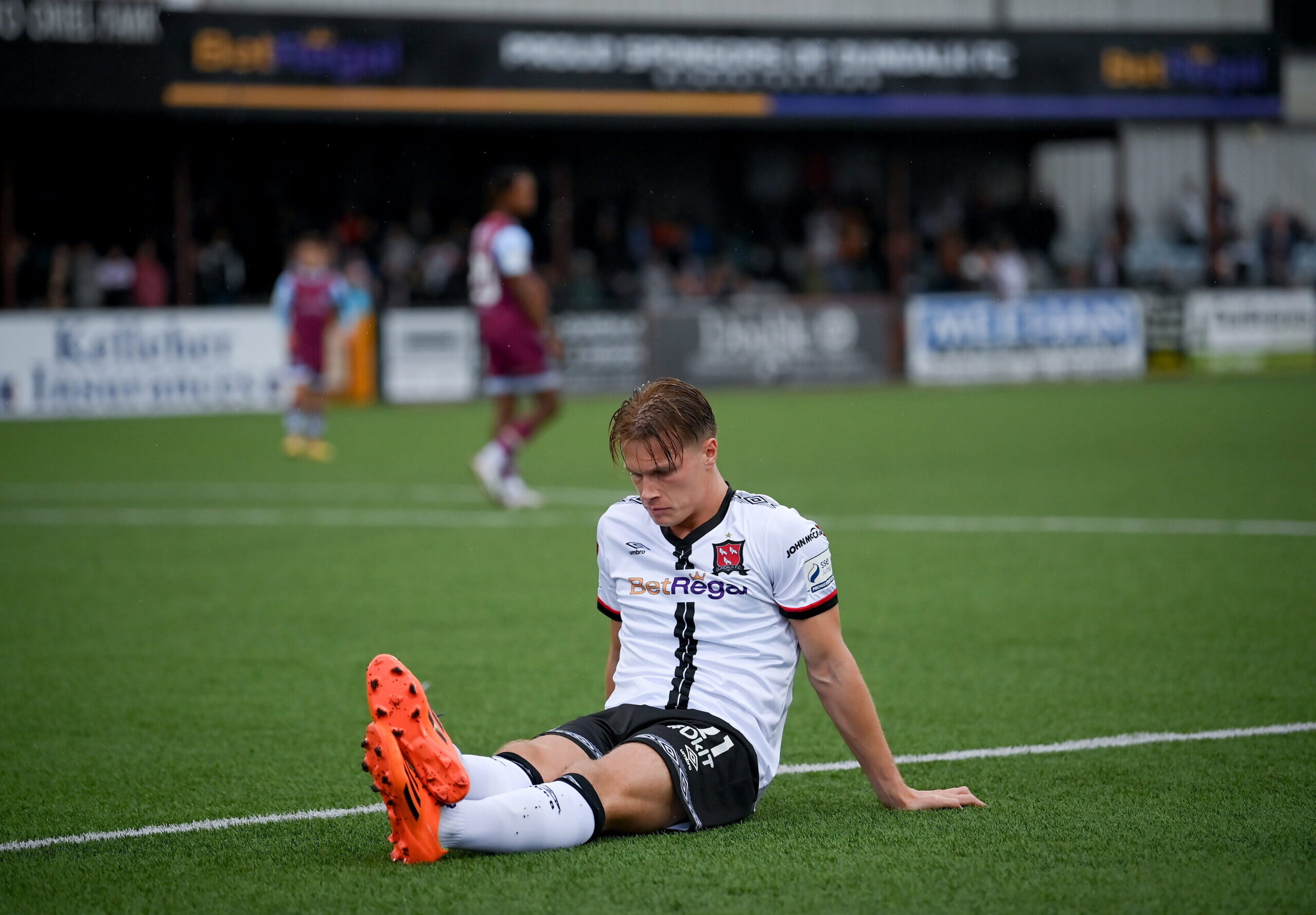 With Darragh Leahy, Patrick McEleney and David McMillan all injured, and Daniel Kelly and Han Jeongwoo only fit for a place on the bench, Lilywhites head coach Vinny Perth handed new signing Sami Ben Amar his first start in a Dundalk shirt. Ben Amar’s fellow new arrival, Cameron Yates, was assigned the number 12 shirt and named as substitute goalkeeper while Patrick Hoban, Greg Sloggett and Will Patching were all restored to the starting XI.

The game was just seven minutes old when Perth had to turn to his bench for the first time as Daniel Cleary, who only returned from injury in the 1-0 loss to Derry City five days earlier, limped off to be replaced by Sonni Nattestad. By that point, the visitors had registered the first effort on goal with Alessio Abibi safely gathering Daniel O’Reilly’s 30-yard free-kick.

With the Drogs keeping their shape well, Dundalk had to be patient and it took until the 17th minute for the Lilywhites to test David Odumosu with Patrick Hoban glancing a header into the keeper’s arms. Will Patching then fizzed one wide of Odumosu’s right-hand post.

Abibi injured himself pushing a Jordan Adeyemo effort around the post in the 27th minute after Conor Kane burst clear of Ben Omar on the left and Tim Clancy’s side grew in stature as the half wore on before they made the breakthrough in the 35th minute. Ben Omar’s loose pass was seized upon by Darragh Markey and he set Doyle away on the left, the winger cutting inside to leave Ben Omar and Andy Boyle in his wake before curling a lovely finish around Abibi.

Sam Stanton headed a Michael Duffy corner over the top and Nattestad did likewise before the interval as Dundalk looked for a way back on level terms but the disciplined Drogs went in full value for their half-time lead. 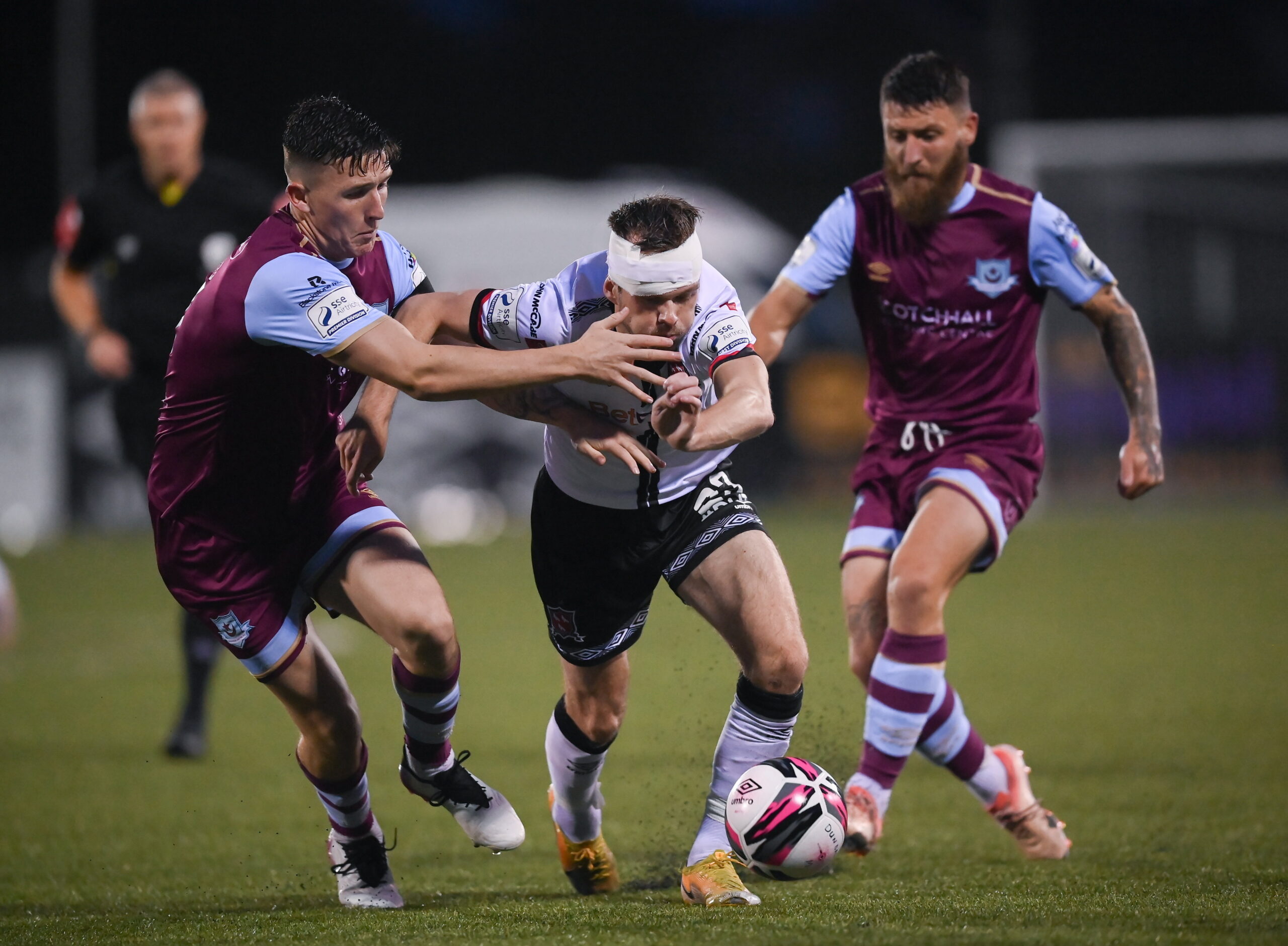 Vinny Perth introduced Sean Murray for Greg Sloggett at the break but it was the visitors who prized the first opening of the half with Abibi parrying a Killian Phillips drive around his post.

Odumosu scrambled across his line to keep Hoban’s goalbound effort out in the 53rd minute but the Drogs landed another stiff blow three minutes later when Kane’s brilliant cross from the left found Doyle and his thumping header left Abibi and the ball in the net.

That left Dundalk with it all to do but they grabbed a vital foothold in the game when Michael Duffy collected a pass from Cameron Dummigan to lash the ball past Odumosu and haul his side back into the game.

Korean winger Han Jeongwoo, who scored the winner in the corresponding game between the sides in April, looked lively when he was introduced as Dundalk pushed hard for an equaliser and Murray headed a good opportunity over the top as the game headed towards its conclusion.

Nattestad almost found the ball at his feet in stoppage time as Dundalk pumped balls into the Drogheda United penalty area but Clancy’s side saw it out to claim their first Louth Derby win since the opening night of the 2014 season and set alarm bells ringing at Oriel Park.