Dundalk’s winning run came to an end as they were held by Finn Harps on Friday evening in an entertaining 2-2 draw at Finn Park in a match played in difficult conditions.

Tunde Owolabi put Harps into the lead in the first half however a quickfire second half special from Michael Duffy, who netted a stunning free-kick, and Patrick Hoban, who scored his seventh in six matches from the penalty spot. Owolabi would get his second of the night after that to ensure that the points were shared.

Vinny Perth made one change to the side which defeated Bohemians 2-1 on Monday night with Will Patching returning to the starting XI following his suspension in place of Sami Ben Amar who dropped to the becnh.

Dundalk had the better of the opening exchanges and had a penalty appeal waved away by Adriano Reale despite a clear handball by Ethan Boyle in the area.

A quick break on the right though almost yielded the opening goal when Patrick Hoban cleverly cut in off the right but his left footed drive just went wide with Ger Doherty beaten.

Hoban again had a chance from similar distance however it was saved by Doherty this time.

They would be made to rue the early pressure and missed chances as Harps took the lead against the run of play just before the 20 minute mark. 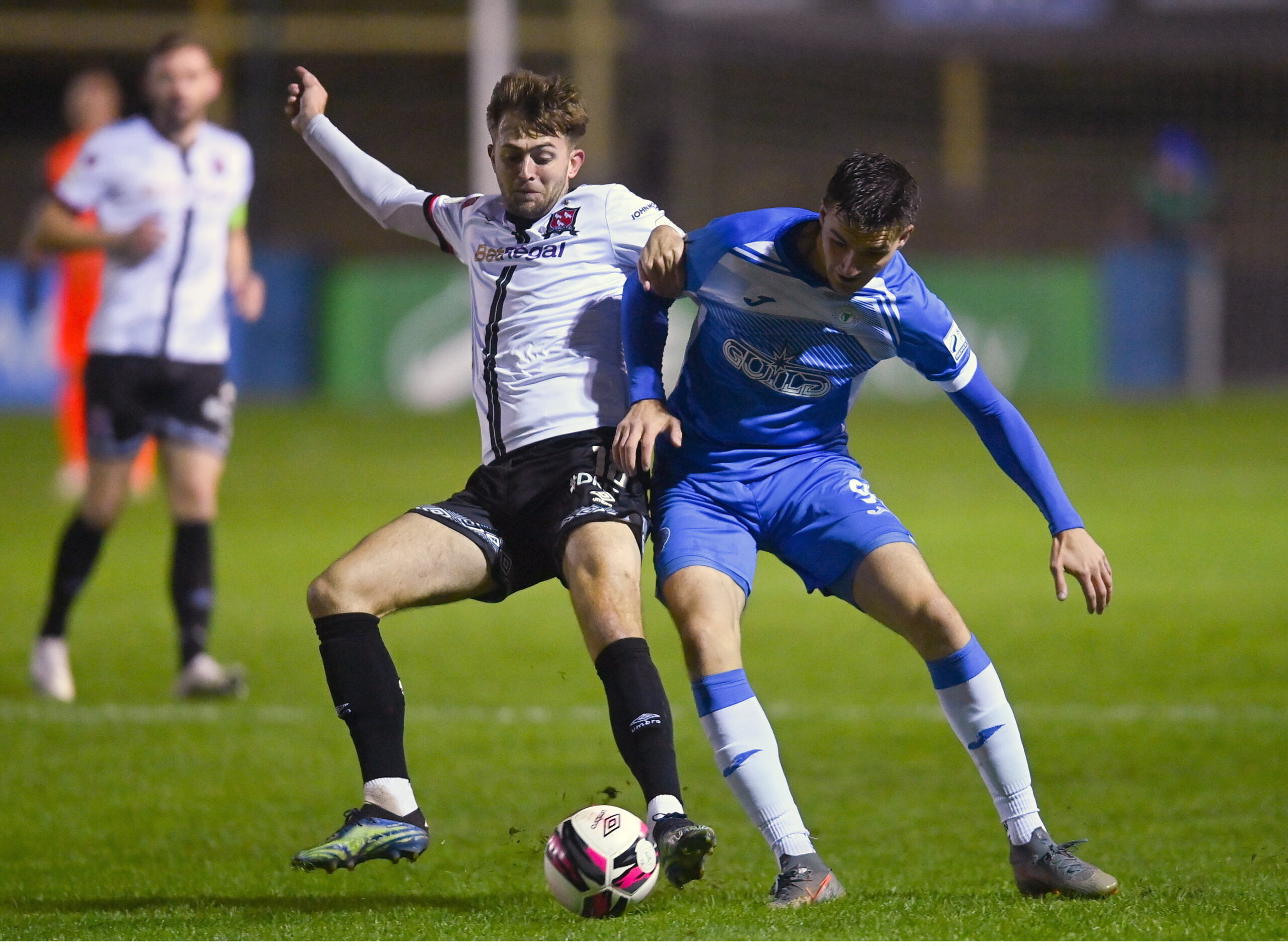 Will Patching and Sean Boyd do battle. Photo by Ramsey Cardy/Sportsfile

Tunde Owolabi opened up space 20 yards from goal after Dave Webster found him, he took a touch and fired brilliantly beyond Cherrie.

Dundalk did try to respond and Sean Murray forced Doherty into a smart save down to his right from distance while just before that Sean Boyd forced a stunning stop from Cherrie however he was offside.

Boyd again tested Cherrie with a dipping free-kick from 30 yards but the goalkeeper gathered at the second attempt.

It should have been 2-0 to the Ballybofey men just before the break when Owolabi rose highest to meet Barry McNamee’s cross however he headed over the bar from point blank range.

The Lilywhites had the majority of possession immediately after the re-start however they were creating little with it other than a Murray header which would have been ruled out for a foul on Webster anyway.

Dundalk would get their equaliser when in a repeat of 10 days ago Michael Duffy netted a free-kick.

The ball was 25 yards out and the winger showed superb skill to get the ball up and over the wall in stunning fashion giving Doherty no chance.

Moments later the Lilywhites were given the perfect opportunity to turn things around when Hoban was fouled inside the area and referee Reale pointed to the spot.

Hoban stepped up himself and dispatched the penalty with confidence to make it 2-1. 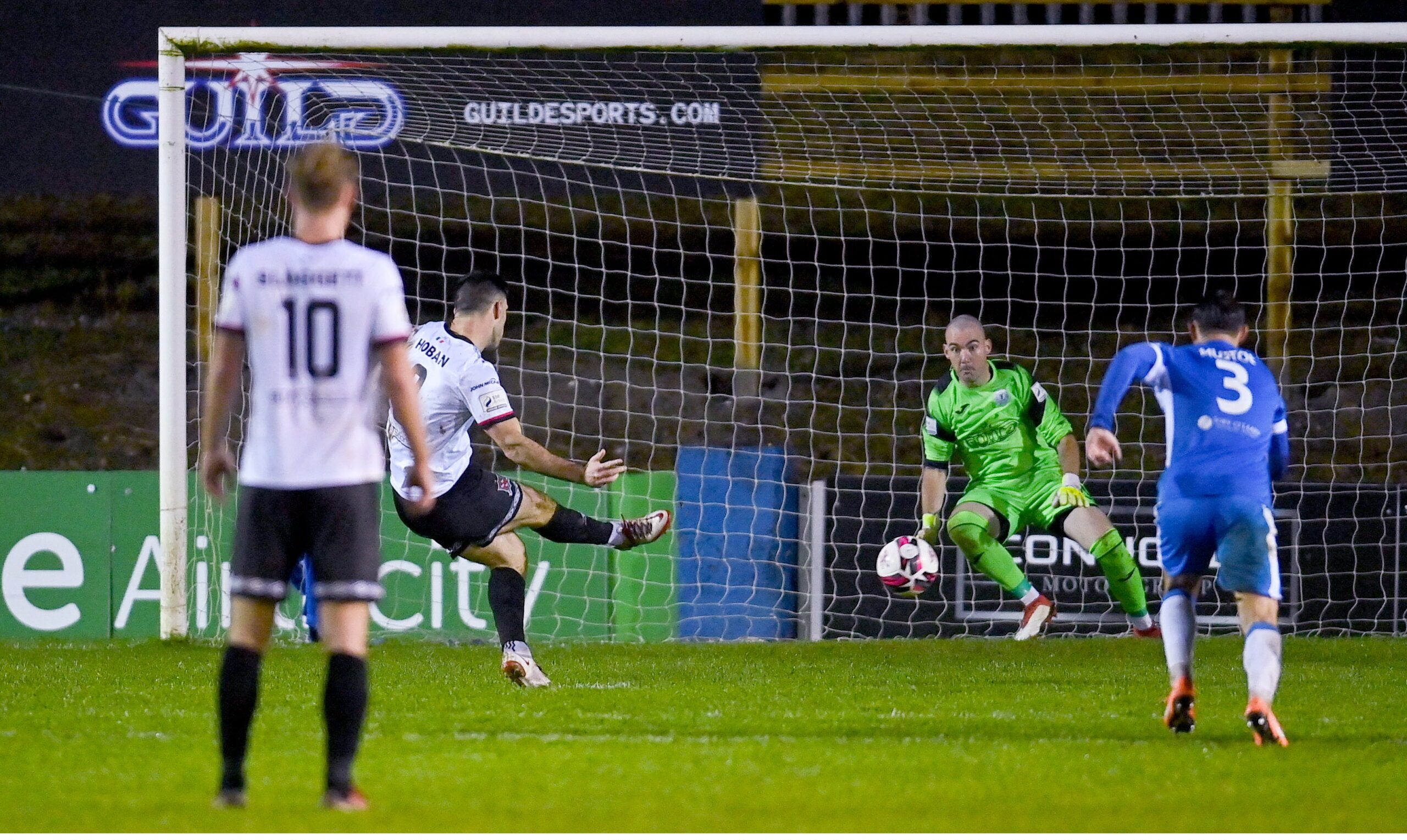 Murray almost made it 3-1 when he showed some trickery to get inside the area but his shot was deflected inches wide.

With the next attack though Harps equalised when a rapid breakaway saw Owolabi get in behind brilliantly and he made no mistake from just inside the area.

Mustoe then had Cherrie back pedaling when his snapshot from distance almost caught the goalkeeper off guard but the ball went wide of the post. 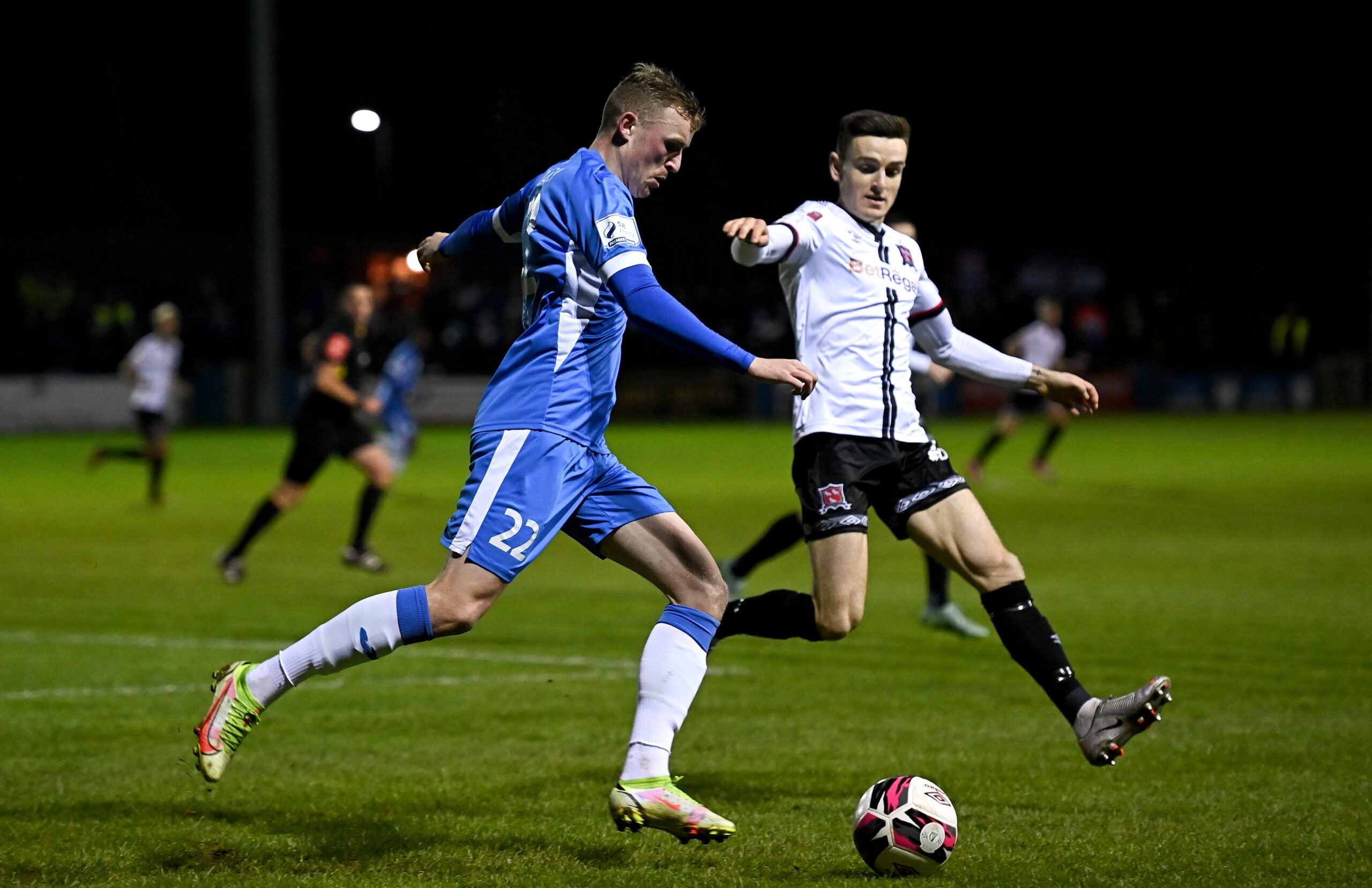 Darragh Leahy closes down the ball. Photo by Ramsey Cardy/Sportsfile

Cherrie the next time though was to the rescue when he saved brilliantly from Ryan Connolly’s shot and managed to push the ball to safety.

Dundalk had a chance in the dying seconds to snatch victory when Sami Ben Amar’s header from a Duffy free-kick flashed inches wide of the right hand post with Doherty rooted to the spot.

That proved to be the final action with referee Reale bringing the match to an end with the Lilywhites welcoming Shamrock Rovers to Oriel next week.