Dundalk FC can confirm that Chris Shields will leave Oriel Park at the end of June.

His final game for the club will take place on Friday night when we play host to Derry City in the SSE Airtricity League Premier Division. Chris will join Linfield for an undisclosed fee when the transfer window opens on July 1st, pending international clearance.

After arriving from Bray Wanderers ahead of the 2012 season, Chris went on to become the heartbeat of a Dundalk side that will be remembered as one of the greatest this country has ever produced. To date, he has made 348 appearances for the Lilywhites in all competitions, scoring 15 goals. Only seven players have worn the shirt on more occasions.

In 2016, he helped the club to the group stages of the UEFA Europa League where he played in the historic 1-1 draw against AZ Alkmaar in Holland and the 1-0 win over Maccabi Tel-Aviv in Tallaght.

Four years later, in 2020, he captained Dundalk to the group stages for a second time and with 36 European games to his name, he is second in the club’s all-time list of European appearance holders behind Sean Gannon. 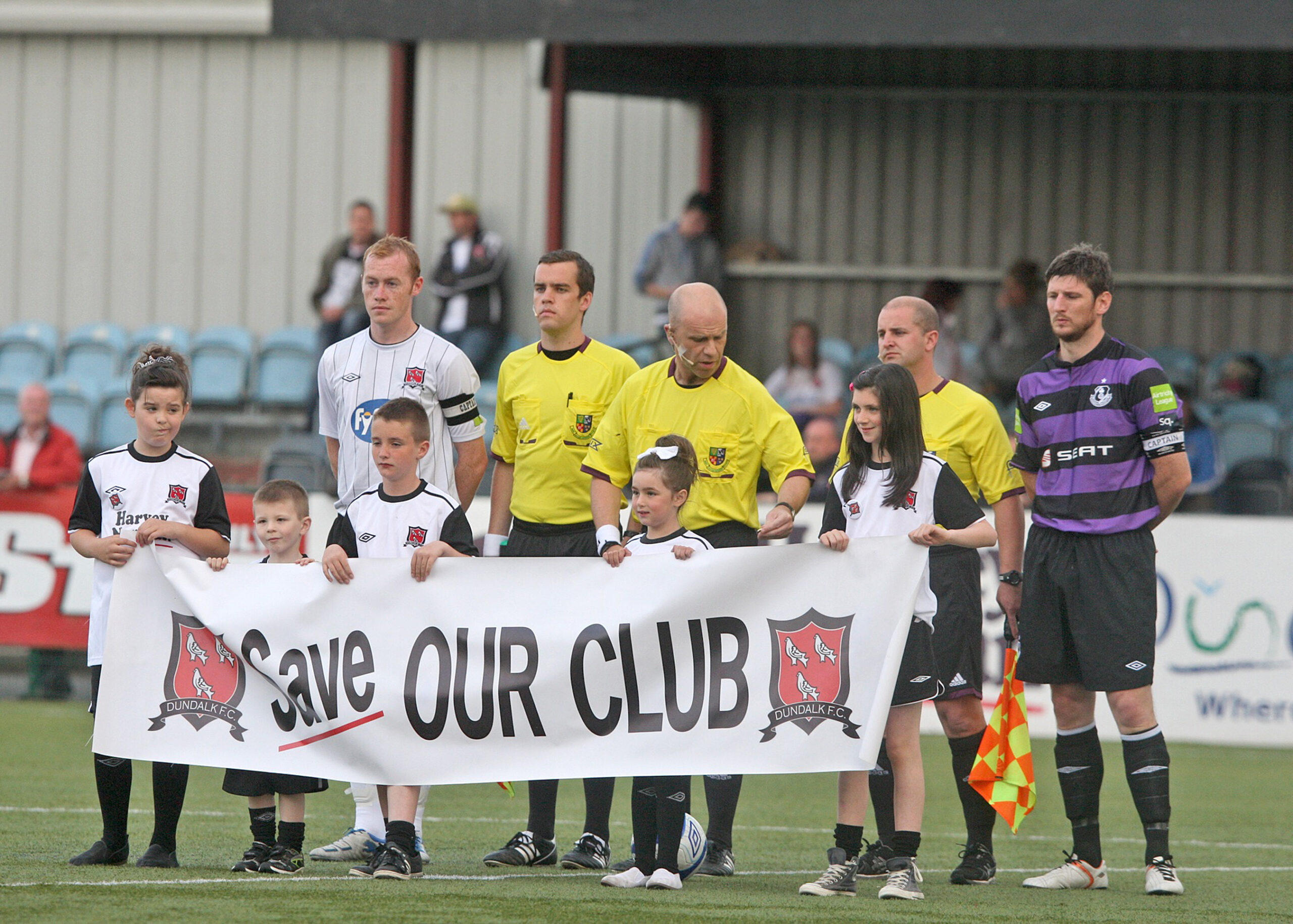 2012: Shields poses for a picture before the game with Shamrock Rovers at Oriel Park in the midst of the ‘Save Our Club’ campaign. Photo by Ciaran Culligan

“After nine-and-a-half years at Dundalk, the time has come to move on. A fantastic opportunity has arisen for me, and it’s one, for family and football reasons, that I can’t really turn down,” said Shields.

“I’m a father to two young kids under the age of three, and I feel it’s important that I’m there for my family and my wife Shauna, who has been at my side during all of my time at Dundalk.

“I’m lucky to have been involved in a period of real success at Oriel Park. I know we had a hiccup during my first season here back in 2012 but from then on, it was a rollercoaster ride of pure joy, emotion, and success.

“There have been so many nights that I will remember forever; the first league win against Cork City in 2014, sealing the title in Tallaght in 2015, the night against BATE in Tallaght in 2016 when everyone was dancing in the rain, the atmosphere during five FAI Cup finals at the Aviva Stadium, and the quietness of a sixth in 2020. 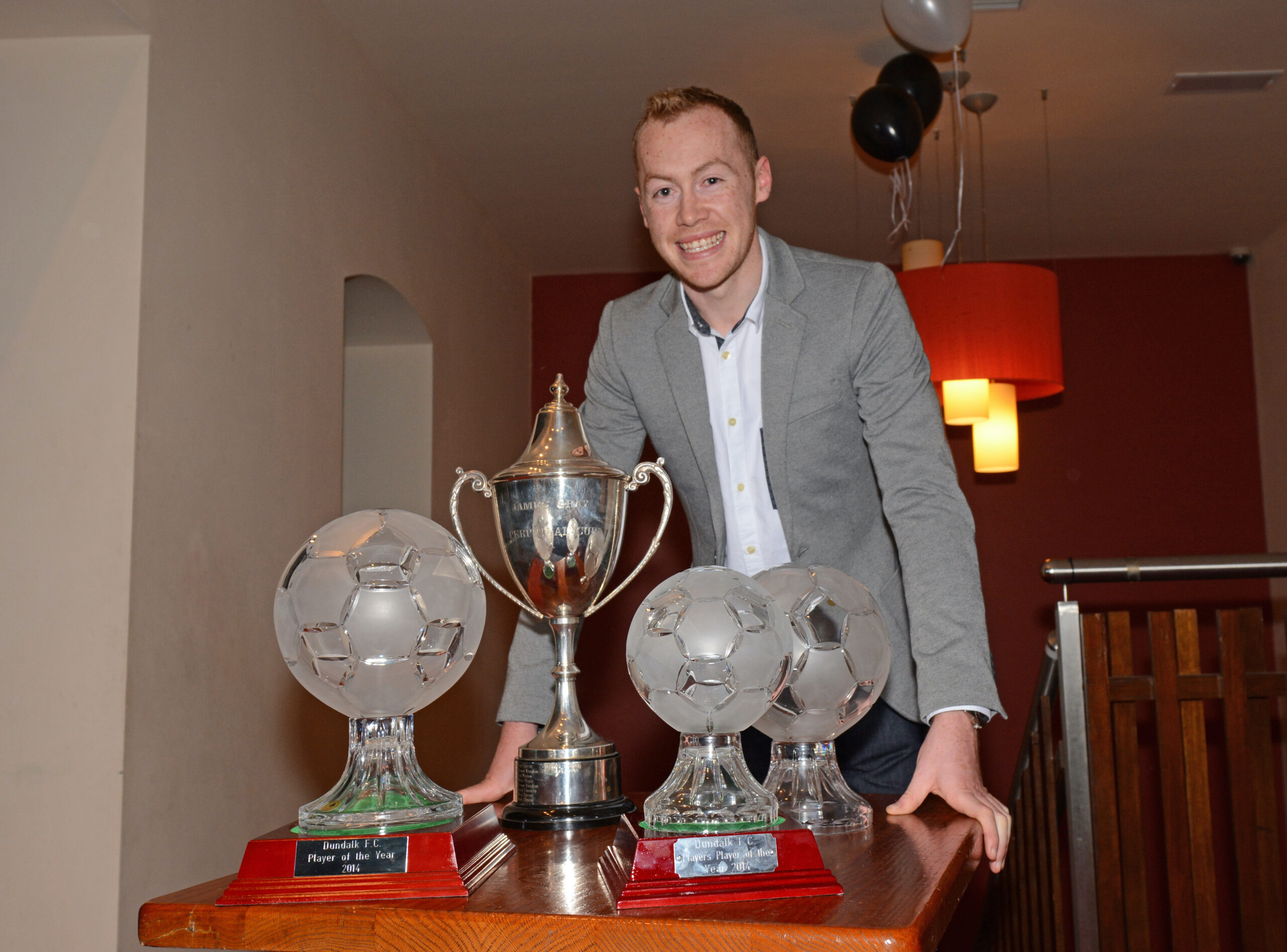 2014: Shields swept the board at the Dundalk FC Player of the Year awards night at the Lisdoo. Photo by Ciaran Culligan

“Whenever my dad comes up for a game, he walks around town waving at people like he’s the Lord Mayor of Dundalk – even though he would go and watch it on the telly in The Jockey’s as he was too nervous coming to the ground!

“My mother has travelled the length and breadth of the country, and she’s been on two or three unbelievable trips to Europe. She was lucky to see us win a game against Hajduk Split in Croatia, and she saw us come within the skin of our teeth of qualifying for the Champions League in Warsaw in 2016. It was a proud moment having her in the stands on those occasions.

“Then my wife Shauna, who has been with me from 2012 to this day. She is probably the only one who sees me experience the extreme highs and the ultimate lows that football throws at you. I’m proud to have shared every bit of success I’ve had with her. After making friendships that you just wouldn’t make at any other club, she will miss Dundalk as much as I will.

“When a club enjoys lots of success, there are plenty of variables, but I am lucky enough to have been a constant, which is nice. When I was at Bray Wanderers, I would never have imagined the success I would go on to have, and I probably take it for granted now.

“When I leave, I will probably only really appreciate the teams, players, and managers I’ve played with and the great people I’ve been around. It makes it that extra bit special when you’re winning things with people you are very fond of. 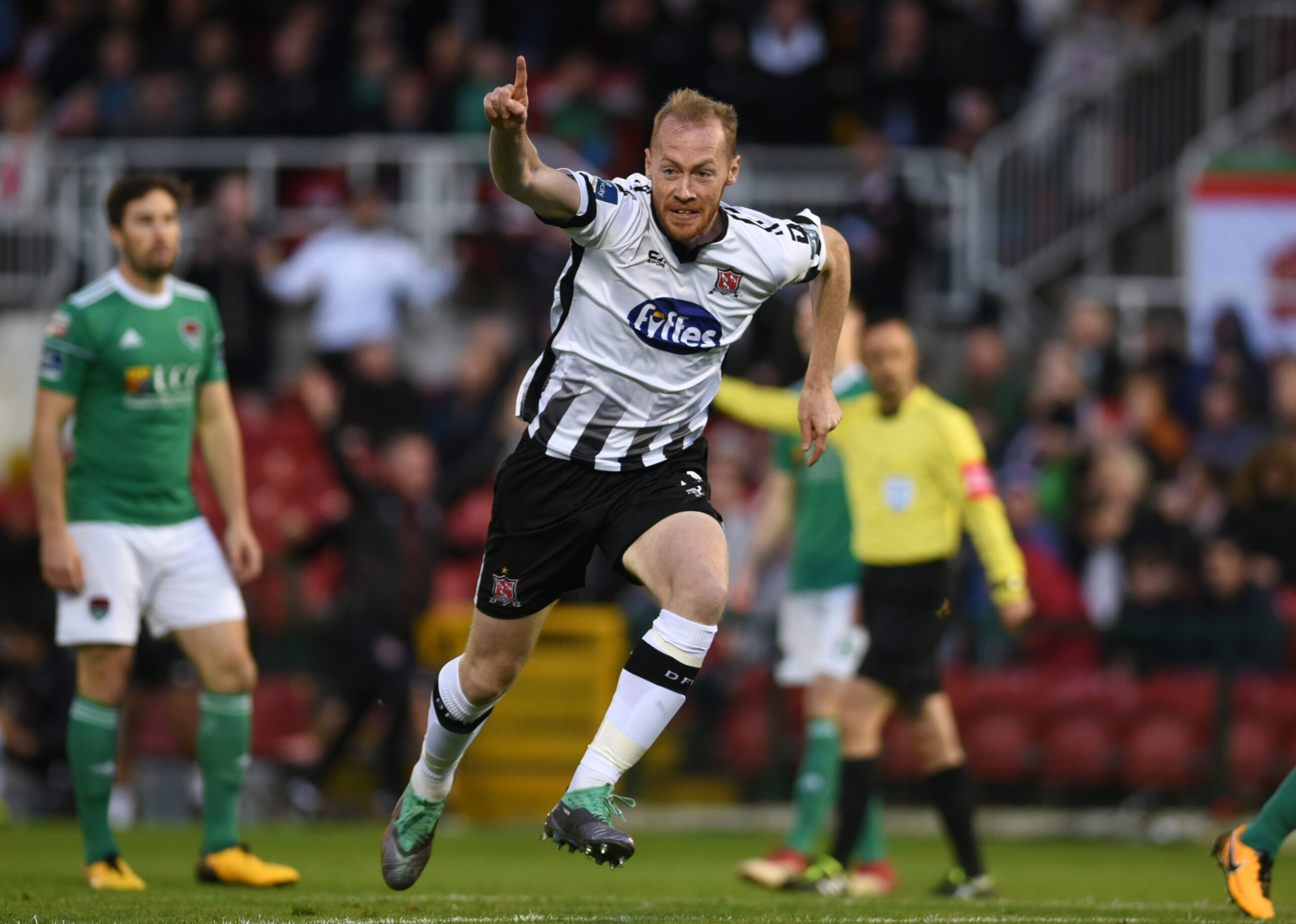 “I’m sure I’ll shed a few tears when I play my last game against Derry City at Oriel Park on Friday night. It will be very hard to mask my emotions. I always used to sign off with a little wave to my family in the main stand, and it will hit me when I do it for the final time on Friday.

“I’d like to thank Jim Magilton and Bill Hulsizer for understanding my reasons for making the move and for their help in making the transition. Day in, day out, I see how tirelessly people work behind the scenes to achieve perfection on the pitch at Oriel Park and I know that success will come back to the club. Vinny Perth has come in to steady the ship and I know that he and the players in the dressing room will do that.

“Finally, a word to the fans. When I came to Dundalk, I was a 21-year-old who was made captain of a huge and great club. I had a lot on my shoulders and I probably didn’t react that well in my first season here, but I would hope that I’ve managed to win some of you around!

“I absolutely loved living in Dundalk. It’s a one town team, and those places are special. You walk past fans and you get to know everyone on first name terms. They’ll still abuse you over the wall, but they’ll also still have a friendly chat with you in a coffee shop in town the next day!

Everybody at the club would like to express our enormous gratitude to Chris for nine-and-a-half years of incredible service. A captain, leader and club legend, we wish him and his family the very best of luck in the future.