UEFA President Aleksander Ceferin and his FIFA counterpart Gianni Infantino have paid their own personal tributes to former FAI President and Honorary Secretary Des Casey ahead of his funeral in Dundalk on Friday.

The two leading figures in the world game have written to FAI President Gerry McAnaney to offer their sympathies to the Casey family and to Irish football after the death on Monday of the former UEFA Vice-President and honorary UEFA Member.

A member of the UEFA Youth Committee when Brian Kerr’s Ireland teams won the European Under 18 and Under 16 Championships in 1998, Des Casey went on to become the first Irishman elected to the UEFA Executive, served as UEFA Vice-President and was awarded life membership of UEFA in recognition of his services to football.

Paying his own tribute, UEFA President Ceferin wrote: “We write to you today to share our heartfelt sympathies on the loss of Des Casey, former President of the Football Association of Ireland and Honorary Secretary. Our condolences and thoughts are with Mary, his family and loved ones – and the whole team at the FAI who will surely want to remember this incredibly special leader and a person whose caring hands helped to make football in Ireland what it is today.

“Des is wrapped up in UEFA’s history and he played such an important and decisive role in football growth and development. To UEFA, he was first a leader in youth and amateur football having served on this committee for well over a decade. UEFA’s member associations in 1992 elected him to the UEFA Executive Committee where his extensive knowledge in football and warm personality made him an invaluable member and he was made a UEFA Vice-President in 2000. Des has been an Honorary Member of UEFA since 2002.

“Des will be deeply missed and his indelible mark on football – both in Ireland and across Europe – will be cherished and remembered for a great many years to come.” 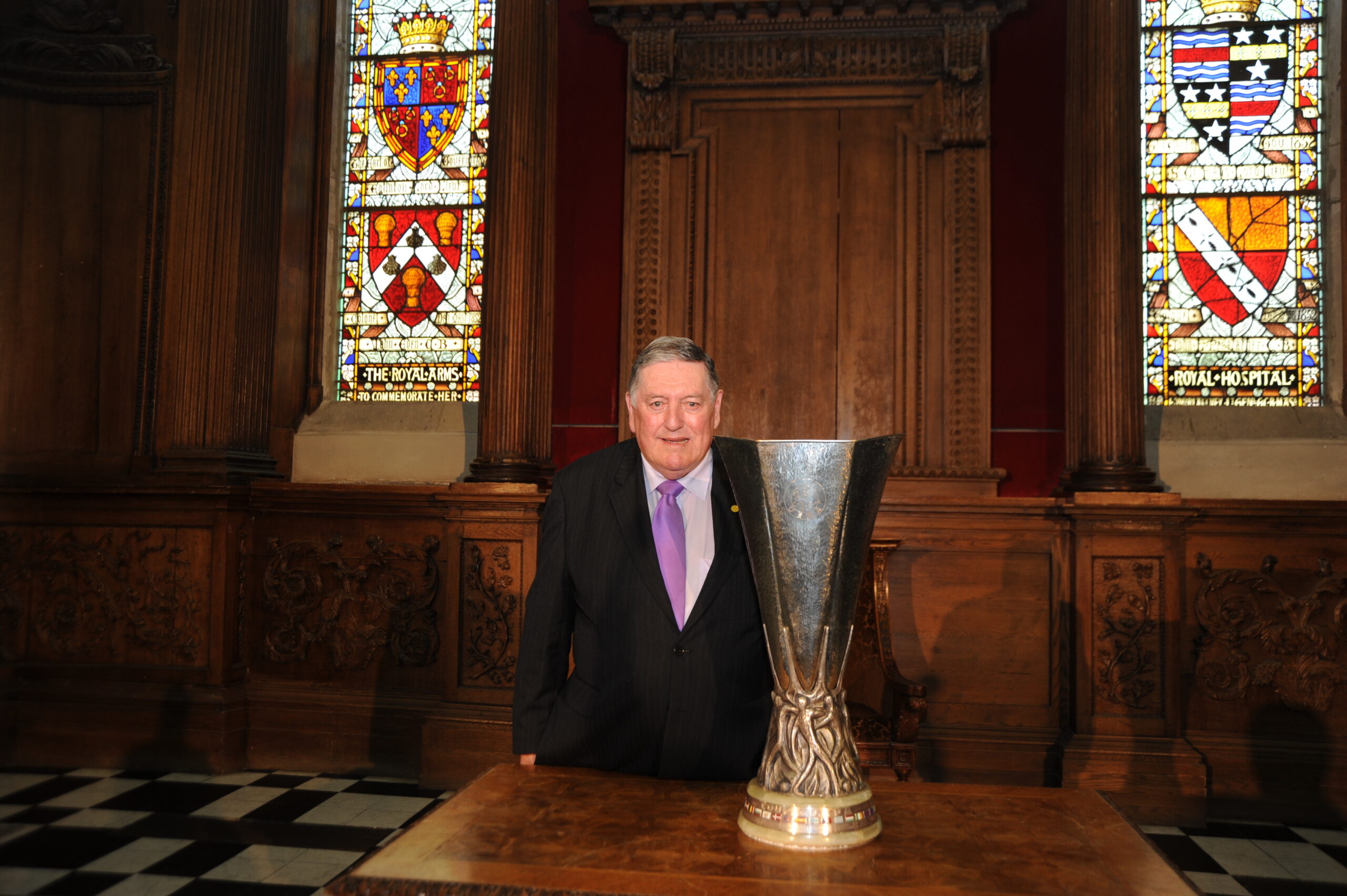 The late Des Casey, pictured with the UEFA Europa League trophy back in 2010. Photo by David Caldwell

UEFA General Secretary Theodore Theodoridis said: “We will forever remember Des Casey and his legacy to the beautiful game. His sterling work on football development during his many years of support and service to UEFA, particularly on youth and grassroots football, will live on with us. Our thoughts are with his family and friends during this difficult time.”

In his letter, FIFA President Infantino wrote: “It was with sadness and emotion that I learned of the passing of the former President and Honorary Secretary of The Football Association of Ireland Des Casey whom I had the privilege of knowing well. Words seem inadequate to express the sadness we feel for this loss.

“Des Casey has made a significant contribution to the development of football and the promotion of our sport and its values in the Republic of Ireland, in Europe and around the world. On behalf of the international football community, I would like to express our gratitude for his commitment and remarkable contribution to the development of the sport that unites us all.

“One of the Republic of Ireland’s most renowned football personalities, first Irishman to be elected to UEFA’s executive committee in 1994, Honorary Life President of Dundalk FC, known for his hard work and passion, his commitment and expertise, his energy and dedication, his legacy and achievements will remain engraved in our memories, and he will truly be missed.

“On behalf of the international football community, I wish to extend our deepest sympathy to the Football Association of Ireland, and to Des Casey’s family, friends and loved ones. Our thoughts are with all of you. We hope that these memories and our words of support may help bring some peace and solace at this difficult time.”

Thanking FIFA and UEFA for their tributes, FAI President Gerry McAnaney said: “I have shared these letters with the Casey family and I know that the esteem in which Des was held across the world of football is a real comfort to Des’s family and friends at this very difficult time.”