FIRST-HALF GOALS DO THE DAMAGE IN NORWAY

FIRST-HALF GOALS DO THE DAMAGE IN NORWAY

Dundalk were undone in Norway on Thursday night as Molde took a big step towards the latter stages of the UEFA Europa League with a commanding 3-1 win on MD5 at the Aker Stadion.

First-half goals from Magnus Wolff Eikrem and Ohi Omoijuanfo – both headers – left the Lilywhites with a tall ask after the break and the natives sealed the win when Martin Ellingsen added a third from an Eikrem corner with 23 minutes to play. With one eye on Sunday’s FAI Cup final against Shamrock Rovers, the Dundalk coaching staff made five substitutions in the second half and they pulled one back in stoppage time when Jordan Flores let fly with yet another stunning effort that flew into the top corner of the Molde net.

With 600 spectators watching on from the stands, Molde enjoyed plenty of the ball early on with right-back Henry Wingo providing a constant outlet, but the visitors, with the searing pace of Nathan Oduwa and Daniel Kelly in the attack, looked dangerous on the counter. There was a tense moment in the 12th minute when Sheriff Sinyan met an Eikrem corner but Cameroun Dummigan was in the right place to block the centre-back’s downward header on the line.

That corner was one of five that the Norwegian side forced in the opening 25 minutes but Gary Rogers, who played at the stadium for Sligo Rovers in 2013, was relatively untroubled with his back three looking solid in front of him. That all changed five minutes later as Molde hit the front. Birk Risa delivered a fabulous ball in from the left and captain Eikrem found a pocket of space in the penalty area to glance a brilliant header past Rogers. The goal was a bitter blow for Dundalk; just minutes earlier Oduwa and Kelly almost combined on the break but the latter’s pass just had carried much pace for his teammate.

Oduwa tested Andreas Linde for the first time in the 35th minute after Kelly did well to retrieve a lost cause on the byline and the Dubliner also asked questions of the Molde keeper shortly after as Dundalk tried to clear the cobwebs but they were left with a mountain to climb five minutes before the break, however, as the natives added a second to take firm control of the runners-up spot in Group B. Risa was the provider again, delivering another inviting cross for Ohi Omoijuanfo to make no mistake with a back-post header.

Shane Keegan made a triple substitution on the hour mark with Patrick McEleney, Michael Duffy and Daniel Cleary all coming on for Greg Sloggett, Nathan Oduwa and Andy Boyle respectively. Omoijuanfo glanced another header just off target prior to that as Molde continued to hold the upper hand and they added a well-deserved third when Ellingsen made it 3-0 with another header from a corner. 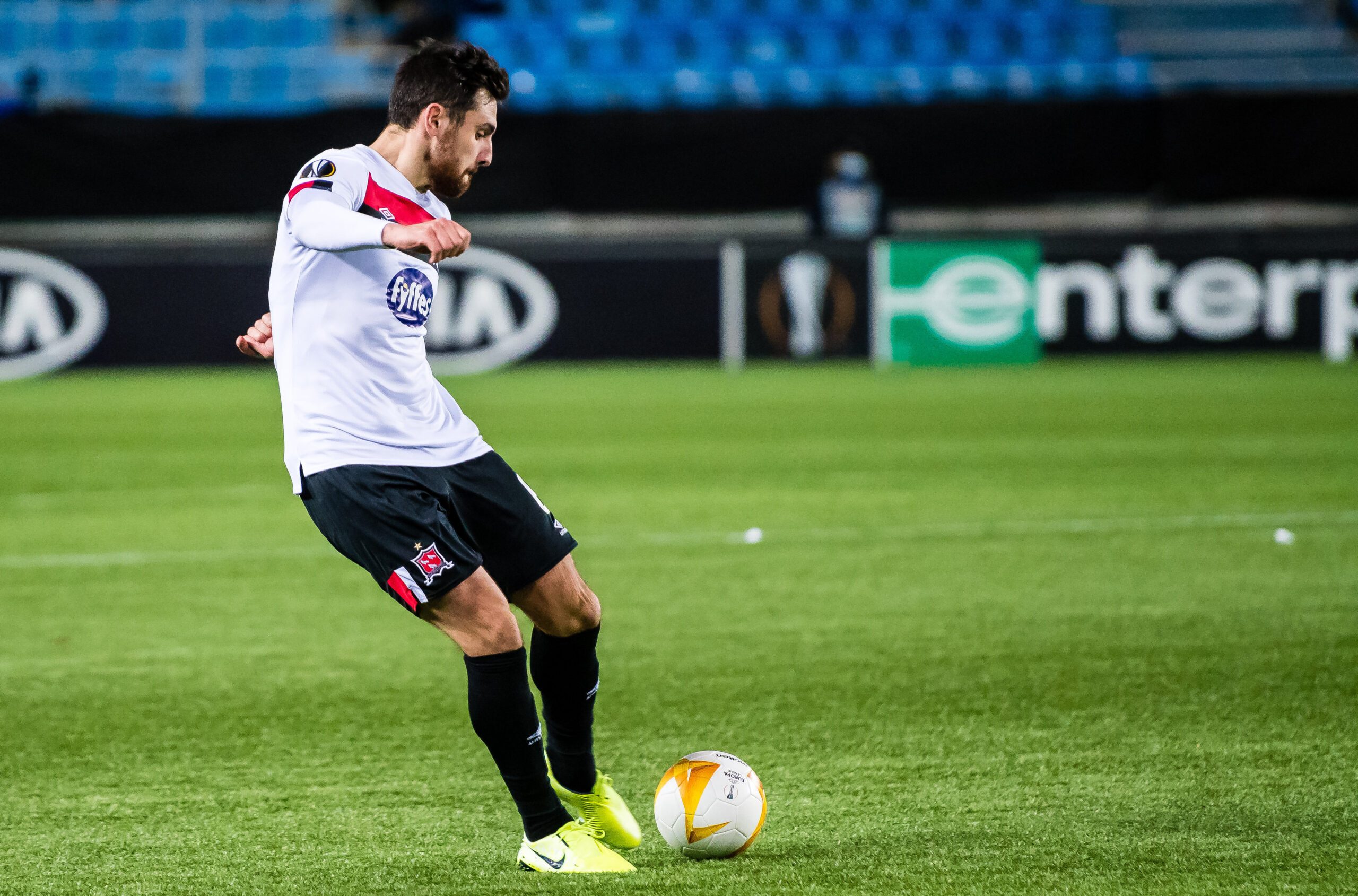 3 December 2020; Jordan Flores of Dundalk shoots to score his side’s goal during the UEFA Europa League Group B match between Molde FK and Dundalk at Molde Stadion in Molde, Norway. Photo by Marius Simensen/Sportsfile

Chris Shields was also put in storage for Sunday when he was replaced by John Mountney just seconds after Ellingsen hit the target and Molde would have added to their haul but for a couple of good saves by Rogers. It looked like Dundalk’s chance of a consolation had gone when John Mountney opted to try and cut the ball back across the face of goal instead of having a go at the target after he was picked out by a Patrick McEleney pass. Flores, though, who drilled a right-footed effort over the top in first-half stoppage time, did find the net in the fourth minute of stoppage time with a thunderous left-footed strike that whistled past Andreas Linde.

The result means that Dundalk’s quest for a point goes into MD6 against Arsenal at the Dublin Arena next Thursday. The Norwegians will advance to the knockout stages if they can avoid defeat in Vienna against Rapid.