After ten seasons at Oriel Park, club captain Brian Gartland, one of the greatest defenders to wear a Dundalk jersey, has announced his retirement from football at the age of 36.

In a post that was published on his social media pages on Saturday evening, Gartland confirmed that after 16 seasons as a professional, it was time to call time on his career.

“It’s been incredible. I gave it everything. I’ve loved every minute of it…and I’ve dreaded this day. I gave it One Last Shot but unfortunately after the injury, the body just can’t get back and stay fit enough to do the job I love.

“Thanks to everyone who played a part, on and off the pitch, my teammates and especially the fans. Football is nothing without them. The boots are hung up. Go raibh míle maith agaibh go léir.”

Gartland joined the club from Portadown in July 2013 and, wearing the number three jersey on his back, became an integral part of the most successful Dundalk team of all time, helping the club to the group stages of the UEFA Europa League in both 2016 and 2020. 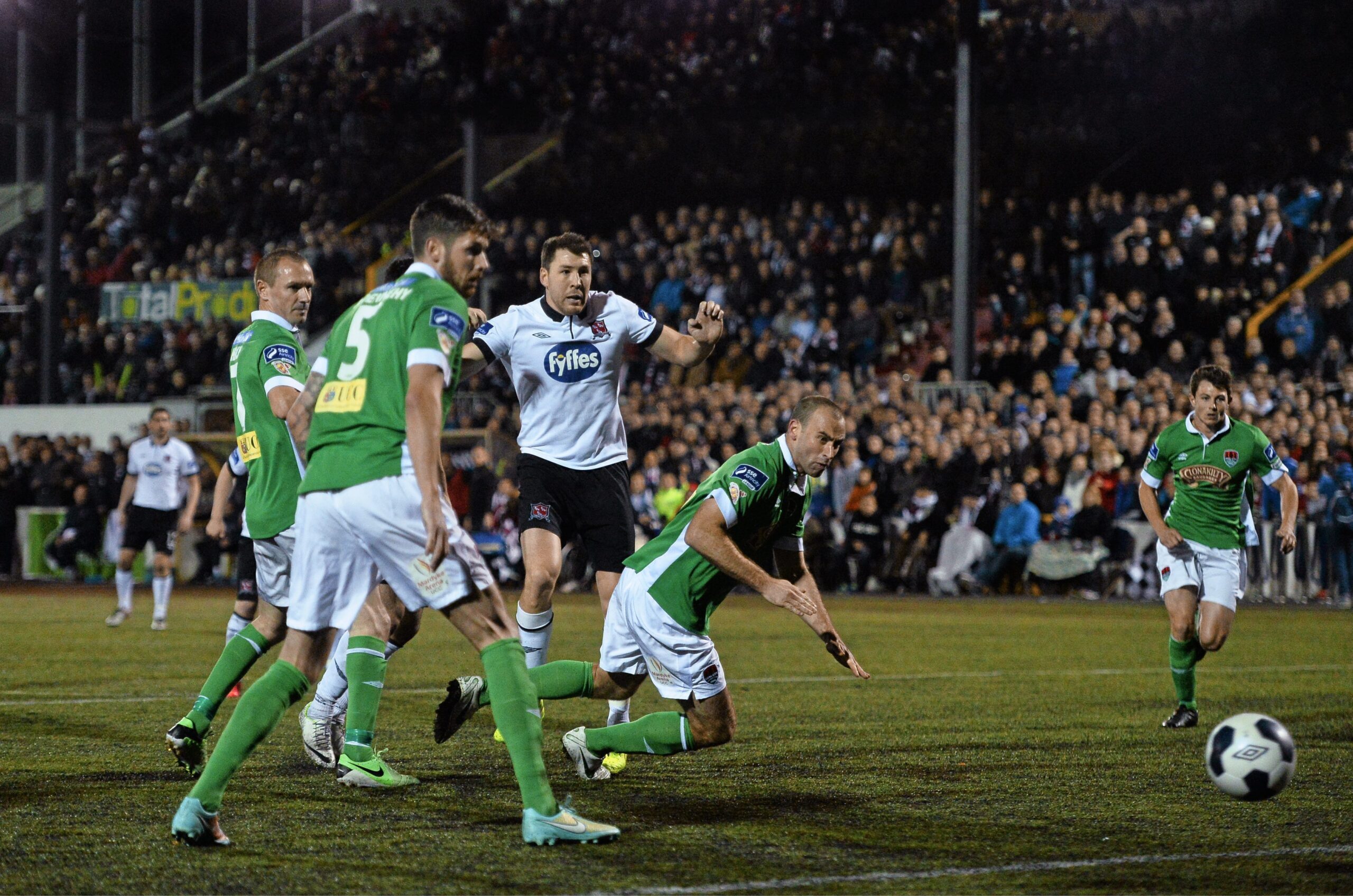 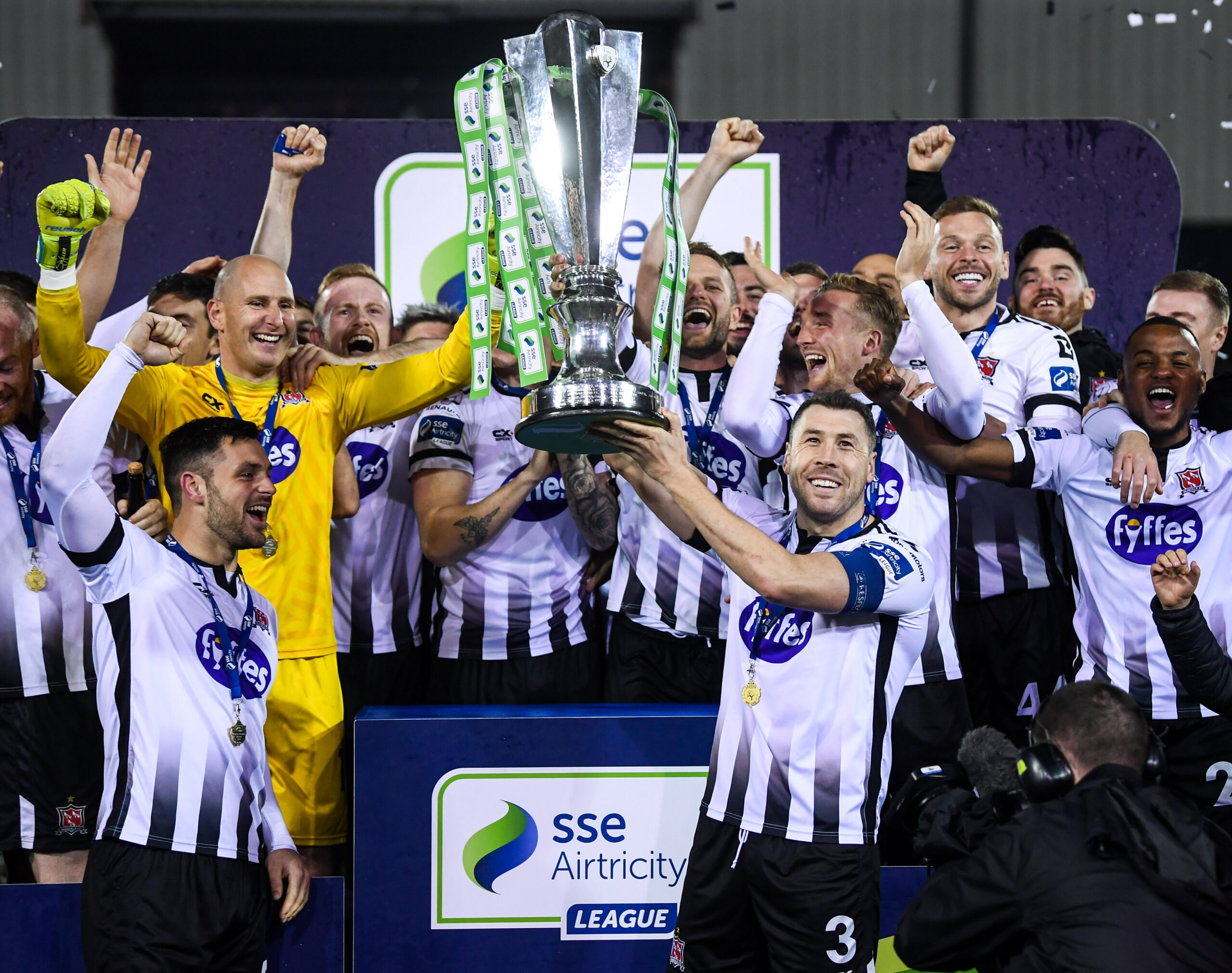 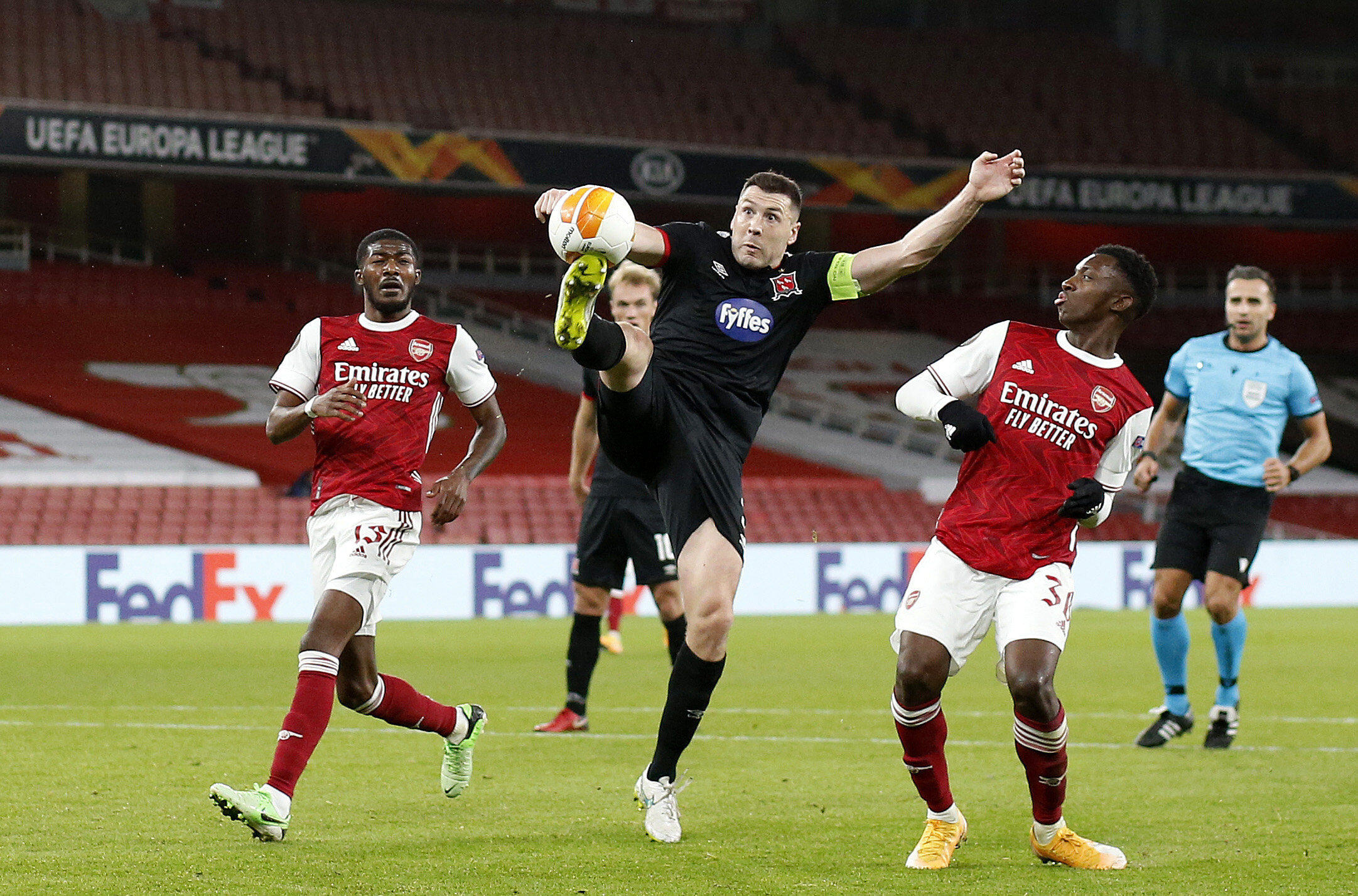 29 October 2020; Brian Gartland in action against Eddie Nketiah, right, and Ainsley Maitland-Niles of Arsenal during the UEFA Europa League Group B match at the Emirates Stadium in London, England. Photo by Matt Impey/Sportsfile 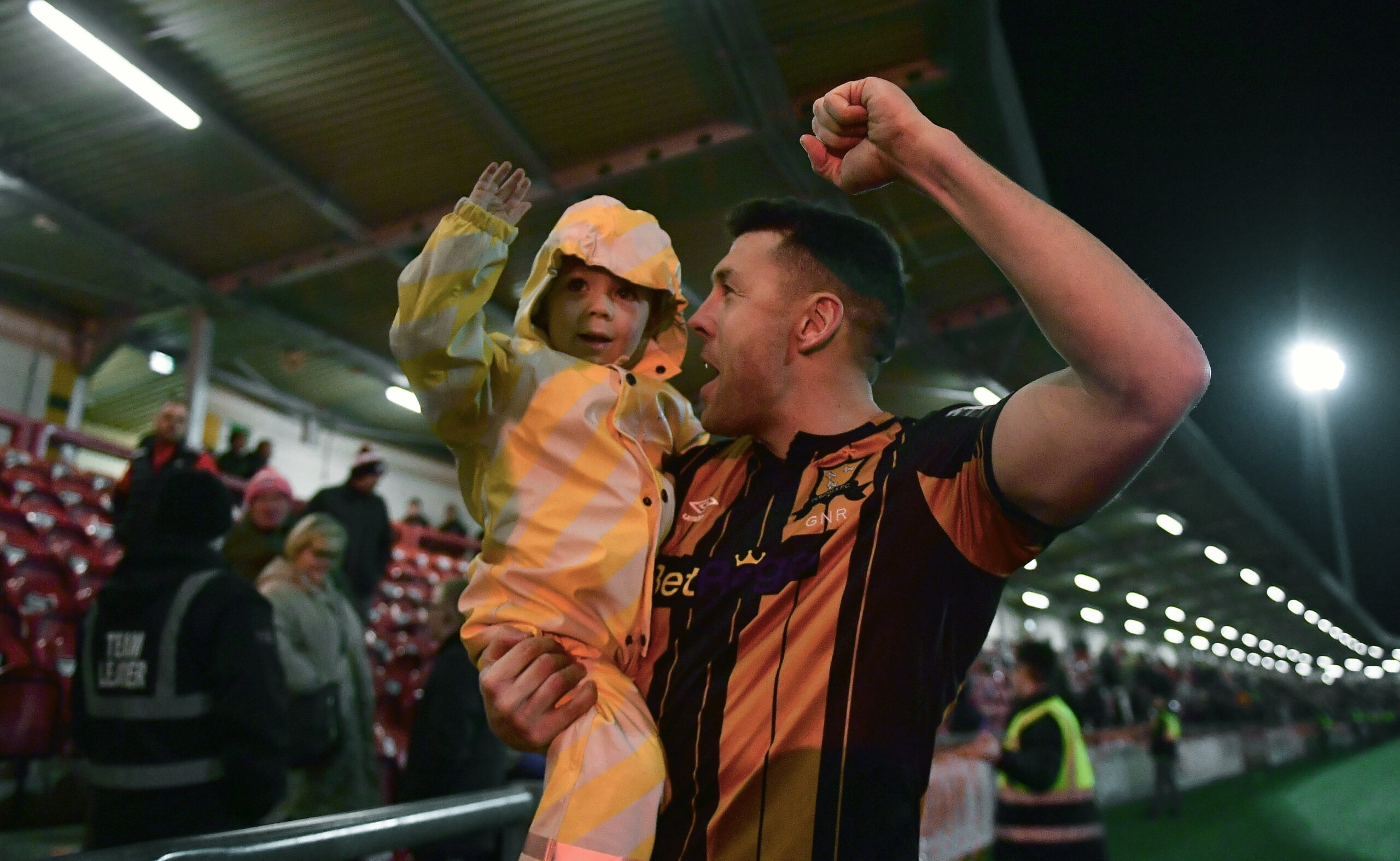 6 November 2022; Brian Gartland celebrates with his son Bobbie after the SSE Airtricity League Premier Division match with Derry City at The Brandywell. Photo by Ben McShane/Sportsfile 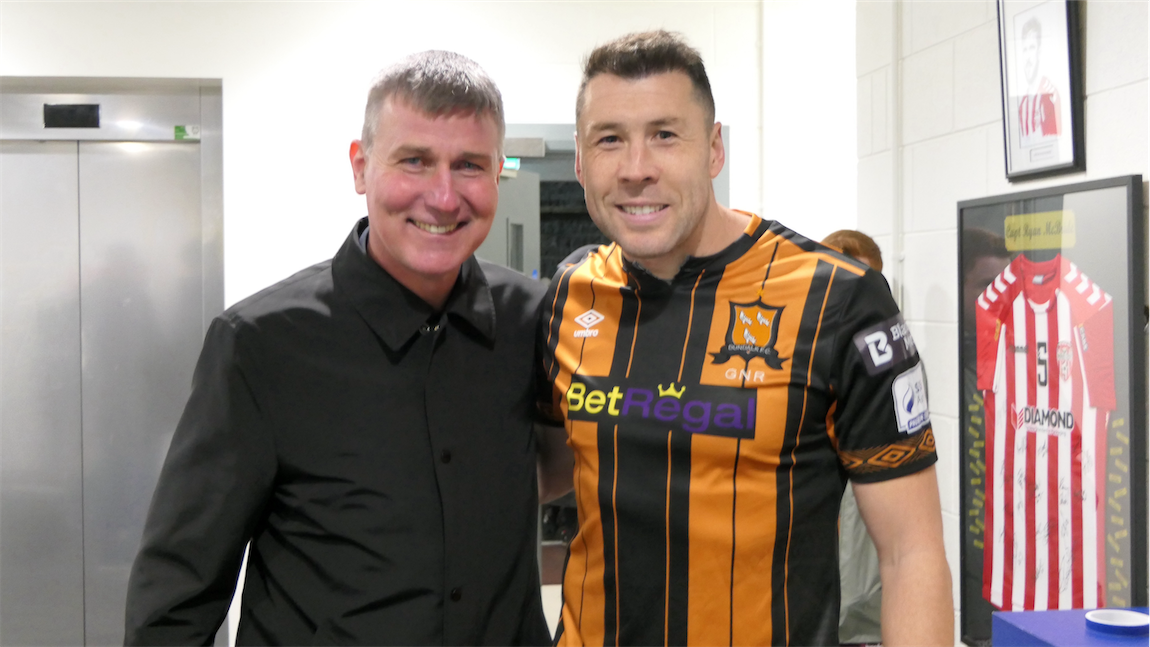 6 November 2022; Brian Gartland, pictured with former Dundalk manager Stephen Kenny after his final game for the club against Derry City at The Brandywell. Photo by Dundalk FC

The Knocklyon-native marked his first start for the club with a goal against Cork City at Turner’s Cross and a further 36 followed – a club record for a defender.

Arguably his most famous came in the 2-0 win over the Leesiders as Dundalk ended a 19-year wait to lift the league title on the final night of the 2014 campaign. Two years later, he bagged the winner against Bohemians at Oriel Park to secure Stephen Kenny’s men their third consecutive league crown.

Brian’s last appearance for the club came against Derry City at the Ryan McBride Brandywell Stadium in November when, fittingly, he produced a man-of-the-match display in Dundalk’s 1-0 win.

In front of his wife Bronagh and his three-year-old son Bobbie, Garts received a rapturous send-off from the travelling supporters and was greeted with a warm handshake from his former mentor Kenny as he made his way towards the dressing rooms one final time, his place in the pantheon of Dundalk greats assured.

Few would have predicted the impact that Brian Gartland would go on to make when his low-key arrival at Dundalk was announced in the summer of 2013. A man mountain of a player, affectionately nicknamed ‘The Bear’, he set the highest standards, on and off the pitch, and has become part of the fabric of the club, and the town itself, over the past decade.

He leaves us with memories that will, along with his name, live forever in these parts.